Accessibility links
For Battered Japan, New Fears An explosion at a nuclear power plant on Japan's devastated coast made leaking radiation — or even outright meltdown — the central threat menacing a nation just beginning to grasp the scale of a catastrophic earthquake and tsunami. 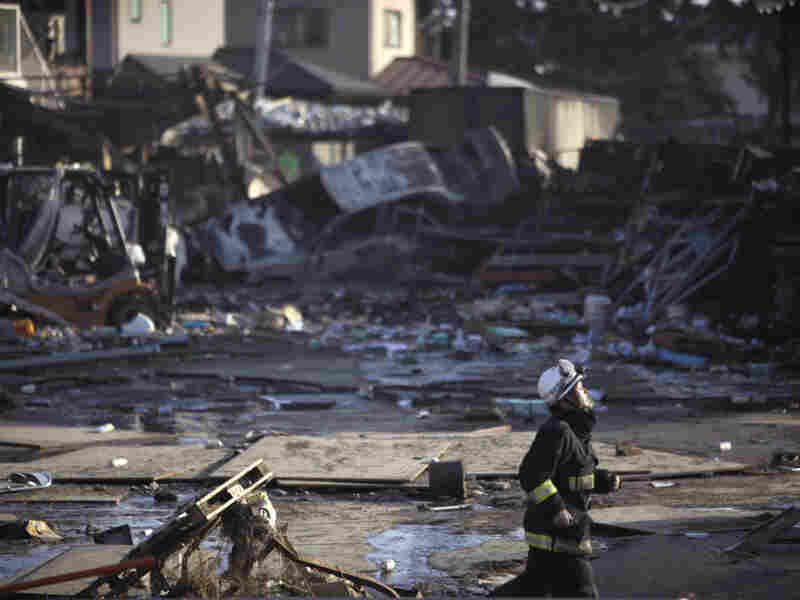 A firefighter runs against a background of damage from a massive tsunami triggered by a powerful earthquake in Sendai in northern Japan. Junji Kurokawa/AP hide caption 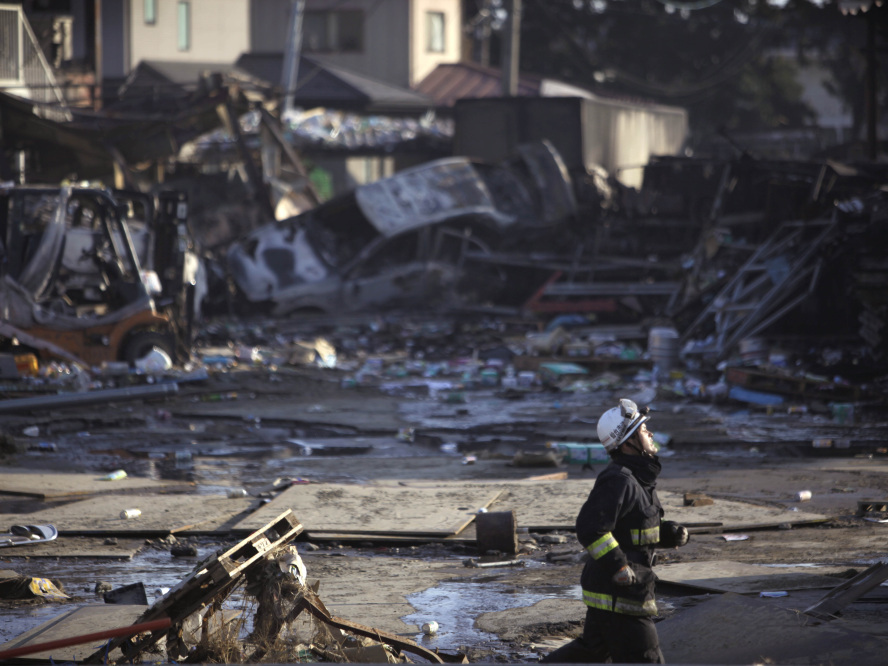 A firefighter runs against a background of damage from a massive tsunami triggered by a powerful earthquake in Sendai in northern Japan.

An explosion at a nuclear power plant on Japan's devastated coast damaged a building Saturday and made leaking radiation — or even outright meltdown — the central threat menacing a nation just beginning to grasp the scale of a catastrophic earthquake and tsunami.

Government spokesman Yukio Edano said the explosion damaged the exterior walls of the building where the reactor is placed, but not the actual metal housing enveloping the reactor.

The government said radiation emanating from the plant appeared to have decreased after the blast, which produced an intensifying cloud of white smoke that swallowed the complex.

"Radiation so far is onsite and it's not at acute lethal levels, but it is of great concern," NPR's Christopher Joyce reported.

The danger was grave enough that officials pumped seawater into the reactor to avoid disaster and moved 170,000 people from the area.

Officials also relieved excess pressure in the containment that houses a second reactor in the same nuclear complex. Pressure from steam can rise to dangerous levels and even destroy the containment building, which is designed to keep radioactive gases from escaping into the atmosphere in an accident, Joyce reported.

Japan dealt with the nuclear threat as it was suffering from Friday's double disaster that pulverized the northeastern coast, leaving at least 686 people dead by official count.

The scale of destruction was not yet known, but there were grim signs that the death toll could soar. The country has been rattled by more than 150 aftershocks since the initial quake, including a strong one off its eastern coast, closer to Tokyo. Local media reports said at least 1,300 people may have been killed.

Trying To Cool The Reactor

The extent of the ongoing danger from the explosion at the nuclear plant in Fukushima, 170 miles northeast of Tokyo, is unclear. Authorities pumped seawater mixed with boron into the damaged nuclear reactor, a strategy nuclear engineering experts in the U.S. may never have been tried before, Joyce reported. He said one expert called it a "hail Mary" effort.

NPR's Christopher Joyce Reports On The Explosion At The Nuclear Reactor

A Scramble To Prevent Nuclear Meltdown In Japan

Boron helps dampen the nuclear reaction that produces heat in the reactor, Joyce said. Seawater has the advantage of being plentiful at the coastal power plant, but it will eventually corrode and ruin the metal structures in the cooling system.

The reactor lost power following the earthquake and tsunami. Electricity is necessary to run the water through the reactor vessel and cool the uranium fuel rods, Joyce said. Japanese engineers have been struggling for two days to get the freshwater cooling system back up to keep the hot reactor core from melting. Edano said efforts to add cooling water to the reactor core had resulted in the production of hydrogen gas, which built up inside the building and then exploded.

The explosion was preceded by a puff of white smoke that gathered intensity until it became a huge cloud enveloping the entire facility. After the explosion, the walls of the building crumbled, leaving only a skeletal metal frame.

Tokyo Power Electric Co., the utility that runs the Fukushima Dai-ichi plant, said four workers suffered fractures and bruises and were being treated at a hospital.

Reporting for NPR, Doualy Xaykaothao said aftershocks continued to rattle the northeast part of the country.

"I've felt at least three and they were quite strong," she reported from Fukushima. "There were times where many of us had to step out of the building, fearing that there would be some kind of collapse."

Evacuation in the city widened throughout the day, expanding from a 3-mile radius to 12 miles or more around the power plant. People in the expanded area were advised to leave quickly; 51,000 residents were previously evacuated.

Officials have not given specific radiation readings for the area, though they said they were elevated before the blast: At one point, the plant was releasing each hour the amount of radiation a person normally absorbs from the environment each year.

"The government continues to say that [the level of radiation in the area] is still not harmful," Xaykaothao said. According to official sources, it's not to a point where people should be alarmed.

Authorities were planning to distribute iodine to residents in the area, according to the International Atomic Energy Agency. Iodine counteracts the effects of radiation.

But, Xaykaothao said, "the community here is certainly not taking any chance; a lot of people are staying away — it's almost a ghost town on some of these streets."

"Everyone wants to get out of the town. But the roads are terrible," said Reiko Takagi, a middle-aged woman, standing outside a taxi company. "It is too dangerous to go anywhere. But we are afraid that winds may change and bring radiation toward us."

The Transport Ministry said all highways from Tokyo leading to quake-hit areas were closed, except for emergency vehicles. Mobile communications were spotty and calls to the devastated areas were going unanswered.

The concerns about a radiation leak at the nuclear power plant overshadowed the massive tragedy laid out along a 1,300-mile stretch of the coastline where scores of villages, towns and cities were battered by the tsunami, packing 23-feet high waves.

It swept inland about six miles in some areas, swallowing boats, homes, cars, trees and everything else.

Images from Japan show scenes of devastation: flooded cities and highways and twisted piles of wreckage where homes once stood. Cars and trucks are strewn haphazardly where the force of the water left them. Hundreds of people were killed, many more are homeless and thousands are without power and water.

"In some areas, the tsunami reached up to six miles inland," NPR's Rob Gifford reported. The tsunami itself was about 30 feet high; 200,000 people are said to have fled.

"There are towns that have been completely flattened," he said. "I'm not sure they're going to find any survivors."

Smashed cars and small airplanes were jumbled up against buildings near the local airport, several miles from the shore. Felled trees and wooden debris lay everywhere as rescue workers coasted on boats through murky waters around flooded structures, nosing their way through a sea of debris.

According to official figures, 642 people were missing and 1,426 injured. In addition, police said between 200 and 300 bodies were found along the coast in Sendai, the biggest city in the area near the quake's epicenter.

The true scale of the destruction was still not known nearly 48 hours after the quake since washed-out roads and shut airports have hindered access to the area. An untold number of bodies were believed to be buried in the rubble and debris.

Local TV stations broadcast footage of people lining up for water and food such as rice balls. In Fukushima, city officials were handing out bottled drinks, snacks and blankets. But there were large areas that were surrounded by water and were unreachable.

One hospital in Miyagi prefecture was seen surrounded by water. The staff had painted an SOS on its rooftop and were waving white flags.

Meanwhile, the first wave of military rescuers began arriving by boats and helicopters.

"The Japanese government has mobilized very quickly," Gifford reported, sending several hundred planes to airports in the north of the main island. "Military and civilian groups have all been moving into the area to try to help the people whose homes have literally vanished. And there are tens of thousands of those people."

Dozens of countries also offered help. President Obama pledged U.S. assistance following what he called a potentially "catastrophic" disaster. He said one U.S. aircraft carrier was already in Japan and a second was on its way. Washington has also dispatched urban search and rescue teams, according to U.S. Ambassador John Roos.

More than 215,000 people were living in 1,350 temporary shelters in five prefectures, or states, the national police agency said. Since the quake, more than 1 million households have not had water, mostly concentrated in northeast. Some 4 million buildings were without power.

Technologically advanced Japan is well prepared for quakes and its buildings can withstand strong jolts, even a temblor like Friday's, which was the strongest the country has experienced since official records started in the late 1800s. What was beyond human control was the killer tsunami that followed.

Japan lies on the "Ring of Fire" — an arc of earthquake and volcanic zones stretching around the Pacific where about 90 percent of the world's quakes occur, including the one that triggered the Dec. 26, 2004, Indian Ocean tsunami that killed an estimated 230,000 people in 12 countries. A magnitude-8.8 quake that shook central Chile in February 2010 also generated a tsunami and killed 524 people.