Accessibility links
New Blast Rocks Japanese Nuclear Plant Officials say a hydrogen explosion occurred Monday at Unit 3 of the stricken Fukushima Daiichi nuclear plant, similar to an earlier one at a different unit of the facility. The blast had been anticipated amid a frantic effort to deal with earthquake and tsunami damage to cooling systems for the plant's reactors. Officials said the reactor's inner containment vessel remains intact. 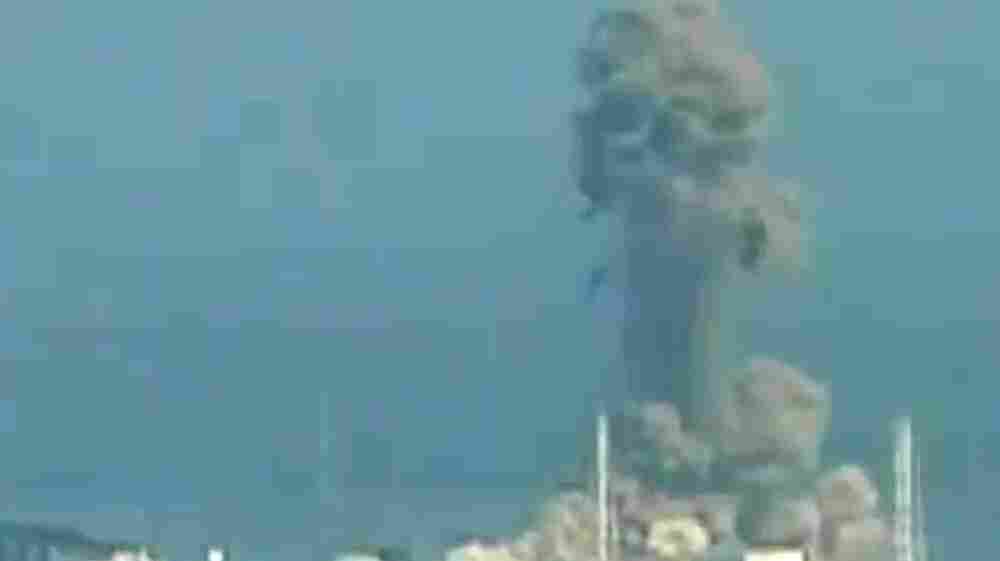 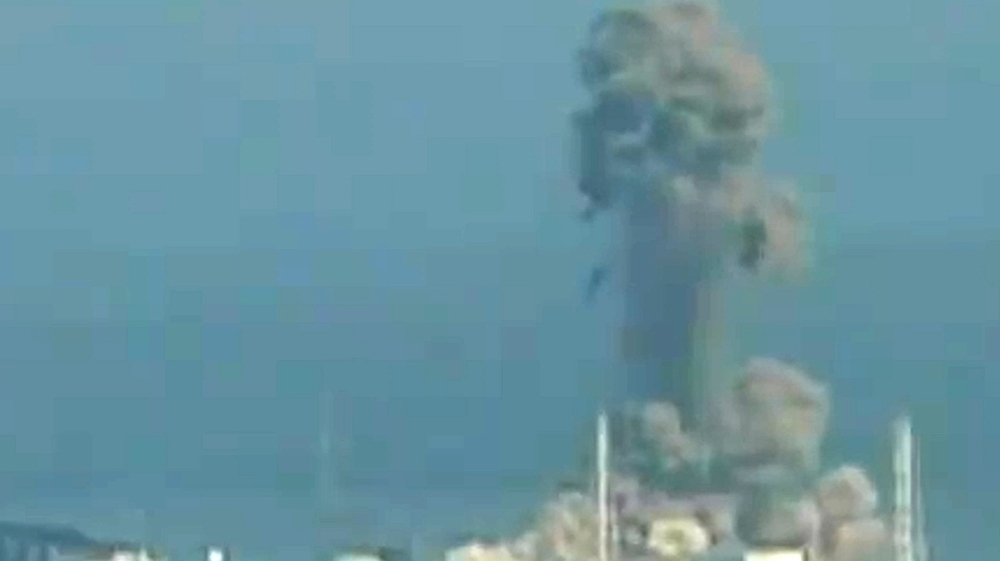 A screen grab taken from news footage by Japanese public broadcaster NHK shows the moment of a hydrogen explosion at the Fukushima No. 1 nuclear power station number three reactor on Monday.

A hydrogen explosion has occurred at Unit 3 of Japan's stricken Fukushima Daiichi nuclear plant, similar to an earlier blast at a different unit of the facility, Chief Cabinet Secretary Yukio Edano said Monday.

Edano said the reactor's inner containment vessel holding nuclear rods was intact, allaying some fears of the risk to the environment and public.

The Unit 3 reactor had been under emergency watch for a possible explosion as pressure built up there following a hydrogen blast Saturday in the facility's Unit 1.

Just hours after Monday's explosion, Tokyo Electric Power Co. said a third reactor — this one at Fukushima Unit 2 — had lost its cooling capacity, which could lead to overheating and an explosion similar to the previous two blasts.

Plant workers were preparing to inject seawater to cool down the reactor and were also set to take other steps, including a release of pressure through ventilation, if the reactor overheats, Tokyo Electric Power official Takako Kitajima told The Associated Press.

"This is Japan's most severe crisis since the war ended 65 years ago," Prime Minister Naoto Kan told reporters, adding that the country's future would be decided by the response to this crisis.

Meteorological officials warned Sunday that there is a 70 percent chance that a magnitude 7 aftershock could hit Japan in the next three days, which could pose another risk to already unstable nuclear reactors.

In the early morning hours Monday in Japan, authorities declared the lowest level state of emergency at the Onagawa nuclear power plant after detecting higher-than-allowed radiation levels in the air outside the facility. The International Atomic Energy Agency now reports that levels have returned to normal, and investigations indicate that no emissions of radioactivity have occurred from any of the three reactor units at Onagawa, which are reported to be under control.

The transient increase in radioactivity levels may have been due to radioactive material released by the Fukushima No. 1 — also known as Daiichi — nuclear plant, located about 60 miles to the south of Onagawa, along Japan's eastern coast.

An explosion Saturday at the Daiichi plant prompted the evacuation of more than 200,000 people living within 12 miles of the complex. The Daiichi plant is located about 170 miles northeast of Tokyo.

Reports said that some radioactive iodine and cesium were released from the Daiichi plant after an explosion blew the roof off a building housing a reactor.

In an effort to prevent a meltdown, engineers had flooded this reactor — unit 1 — with seawater after its cooling system failed. The lack of electrical power has kept water pumps from circulating enough water through the reactor core.

On Sunday, engineers flooded the unit 3 reactor. Officials said they may pump in seawater into yet another, unit 2, as well.

Engineers have had to vent radioactive vapor to relieve high pressure and avoid an explosion like the one that struck the complex on Saturday. It damaged the exterior walls of the building where the reactor is placed, but not the actual metal housing enveloping the reactor.

The government said radiation levels around Fukushima Daiichi were not harmful and that amounts emanating from the plant appeared to have decreased after the blast, which produced an intensifying cloud of white smoke that swallowed the complex.

"Radiation so far is onsite and it's not at acute lethal levels, but it is of great concern," NPR's Christopher Joyce reported.

About 7 miles to the south, officials also monitored Fukushima No. 2 — also known as Daini — nuclear complex, where there are four more reactors. The International Atomic Energy Agency reports that these plants do have electricity for cooling. Electricity is necessary to run the water through the reactor vessel and cool the uranium fuel rods.

In towns near the reactors, residents are lining up to be tested for radiation exposure. NPR's Doualy Xaykaothao visited a testing facility in Koriyama City, where 1,500 people have been seen so far.

But, she says, "It's not yet clear who's been exposed, and how dangerous the level."

Authorities were planning to distribute iodine to residents in the area, according to the International Atomic Energy Agency. Iodine counteracts the effects of radiation.