Accessibility links
Primer: Japan's Nuclear Crisis Officials are struggling to contain a crisis triggered by Friday's massive earthquake and tsunami. Here, a look at some of the science involved.

Inside The Nuclear Reactors

Japanese officials are struggling to contain a nuclear crisis triggered by the massive earthquake and tsunami that struck the island nation Friday. Several nuclear reactors lost power after the magnitude 8.9 quake and tsunami, and electricity is needed to run the cooling systems that keep reactor cores from overheating.

Engineers are closely monitoring problems at a growing number of nuclear power plants in the country, but much of the attention is on reactors in Fukushima prefecture. Officials suspect a partial meltdown has occurred at two separate reactors at the Fukushima Daiichi plant along Japan's northeastern coast. 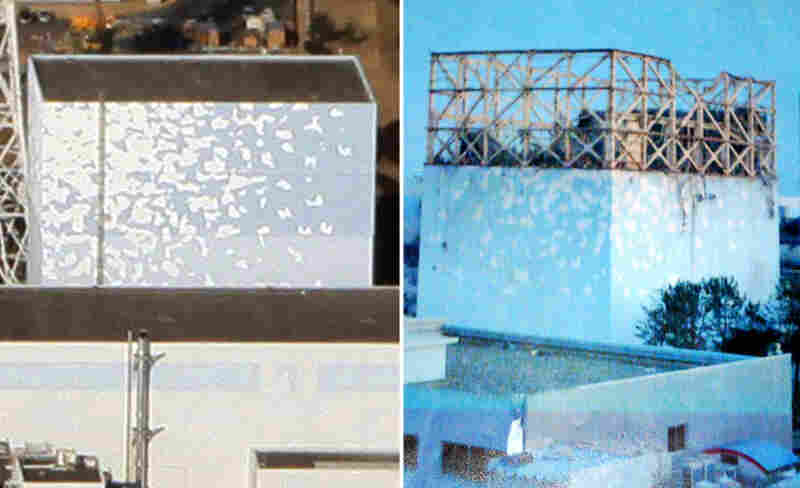 This composite shows the before (left) and after (right) file images of the Fukushima Daiichi nuclear power plant following an explosion. Tepco via Jiji Press/AFP/Getty Images hide caption

How many reactors are in trouble at the Daiichi nuclear plant?

Three. After the quake, the Daiichi plant lost electric power. Three of its six reactors were undergoing routine inspections before the quake and were not operating, according to Tokyo Electric Power Co., which runs the plants.

But at the other three reactors that were operating, the nuclear fuel rods inside continue to burn — even after officials called for an emergency shutdown following the quake. Those reactors at Daiichi — known as units No. 1, No. 2 and No. 3 — have experienced problems keeping their reactor cores from overheating since then.

Both Unit No. 1 and Unit No. 3 have exploded. What caused the explosions?

Water is a big part of the story at Daiichi. The reactors there are boiling-water reactors: The nuclear fuel heats water, generating steam that then turns a turbine to create electricity. The water is also used to keep the nuclear rods cool.

It's probable that hydrogen built up in the cooling system for both units. When the water gets too hot in the reactor, the hydrogen can get stripped out of the water molecule. Engineers vented some of the hydrogen into the containment building. Hydrogen is combustible, and in this case, it exploded. Neither explosion has damaged the reactors, officials say — just the buildings they sit in. Both units are now being cooled by seawater. Officials suspect both have experienced a partial meltdown.

What's the situation at Daiichi's Unit No. 2?

There are also problems with inadequate cooling at Unit No. 2. According to Tokyo Electric Power Co. (TEPCO), the fuel rods were exposed at some point Monday. They are now pumping in seawater to cool the reactor; it is unclear how successful that effort is.

What exactly is a partial meltdown?

Meltdown isn't a technical term, and nuclear science agencies don't have a strict definition. But a meltdown typically occurs when the core of a nuclear reactor severely overheats, damaging the nuclear fuel rods. Normally, the rods are kept covered in water to keep them cooled. But if water levels drop so that the rods are exposed, they will heat up. The more area of the rods gets exposed, and the longer they are out of water, the hotter they grow — and they can melt.

A partial meltdown can mean a wide range of things. Just a small portion of the nuclear rods could get exposed, limiting the heat produced. But if enough of the nuclear material melts, it could generate so much heat that the material burns through the containment structure, escaping into the outside world.

So how serious is the partial meltdown at the Fukushima Daiichi site?

There's no way to know for sure that a partial meltdown has occurred, since you can't get inside the steel reactor vessel, where the fuel is. But officials have found cesium-137 in the air. That's evidence that radioactive fuel — which is supposed to be completely sealed in metal tubes inside the reactor — has been exposed to water or air. That suggests a fuel rod or rods have melted or have broken.

When will officials know how extensive the partial meltdown was?

Not until the reactor rods cool down enough — both in terms of temperature and the radiation given off — for engineers to get inside the containment vessel. That could take months.

How much radiation has been released so far?

Well, operators continue to release steam and hydrogen from the cooling systems at all three of the reactors under watch at Daiichi. That's to keep the pressure down and avoid another explosion. And venting that vapor can release radiation into the air outside the complex, though officials are not sure how much.

Authorities say radiation levels around the plant are several times what they should be, though they're not acutely dangerous. There are reports of some radiation exposure — both to nuclear workers and residents.

What has to happen to avoid a total meltdown and catastrophe?

One part of it is to get electric power back to make sure the cooling water doesn't evaporate. If the nuclear rods aren't cooled, they could melt within hours. That's what happened at Three Mile Island in 1979 in Pennsylvania – a partial melting that was stopped and contained. At Chernobyl in the former Soviet Union, the melting wasn't stopped and the core burned up and spread radiation all over Europe.

With reporting by NPR's Science Desk.