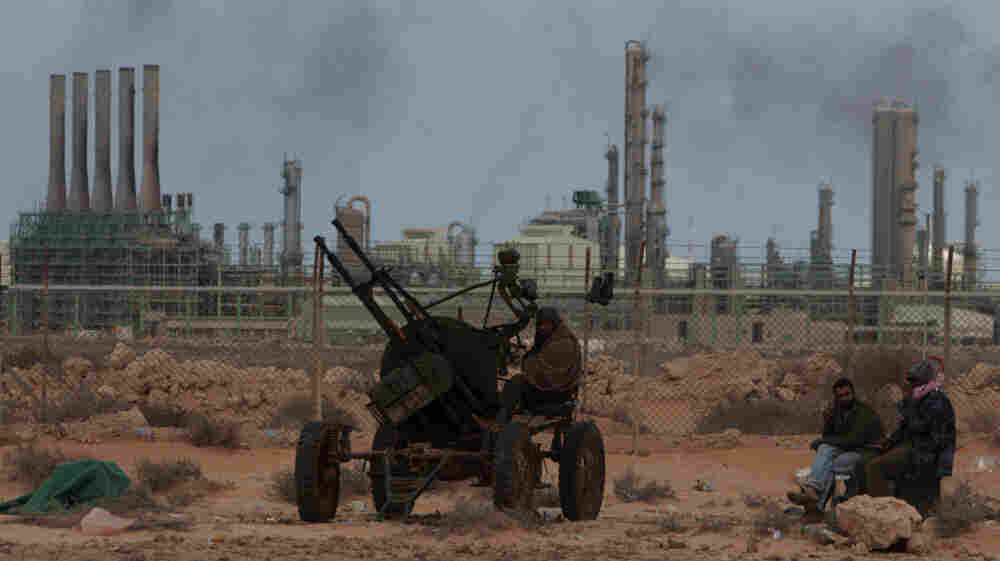 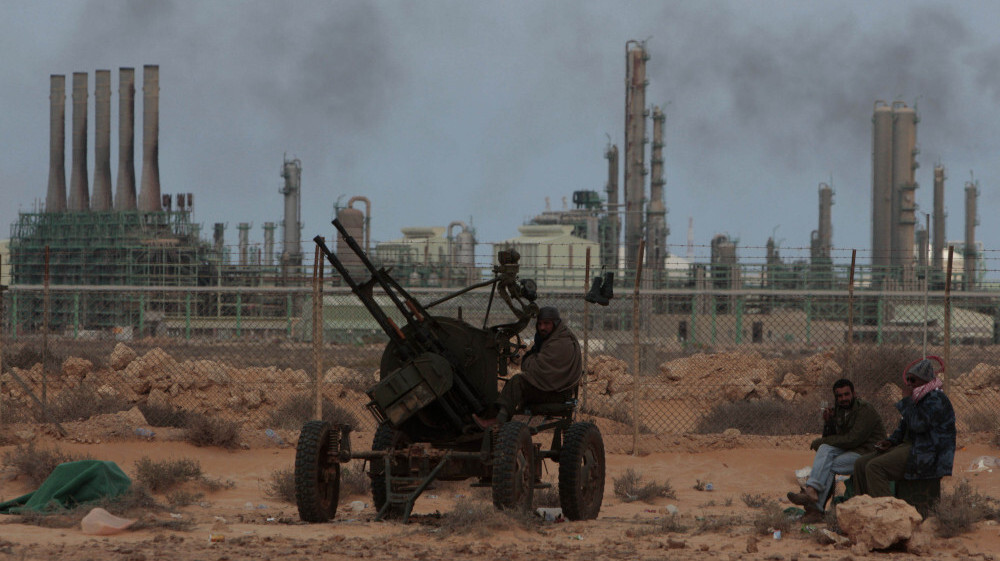 Under pressure from allies and growing calls for military intervention in Libya, the Obama administration held its first high-level talks with the Libyan opposition on Monday but remained undecided about exactly how much support to lend a group it still knows little about while turmoil and uncertainty increase across the Arab world.

U.S. Secretary of State Hillary Clinton held a late-night, 45-minute meeting in Paris with Mahmoud Jibril, a senior Libyan opposition figure, after discussing the widening crisis with French President Nicolas Sarkozy. Sarkozy, along with British Prime Minister David Cameron, meanwhile, stepped up calls for world powers to isolate Libyan leader Moammar Gadhafi with a no-fly zone, amid diplomatic differences over how much backing to give rebels. 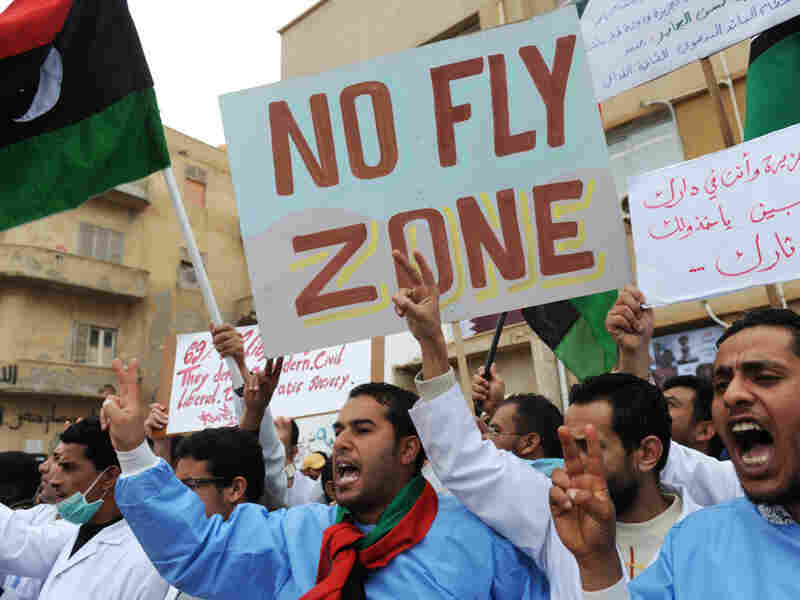 Doctors working at a local hospital join other protesters in calling for a no-fly zone over Libya at a rally in the eastern Libyan town of Benghazi on March 13. Roberto Schmidt /AFP/Getty Images hide caption 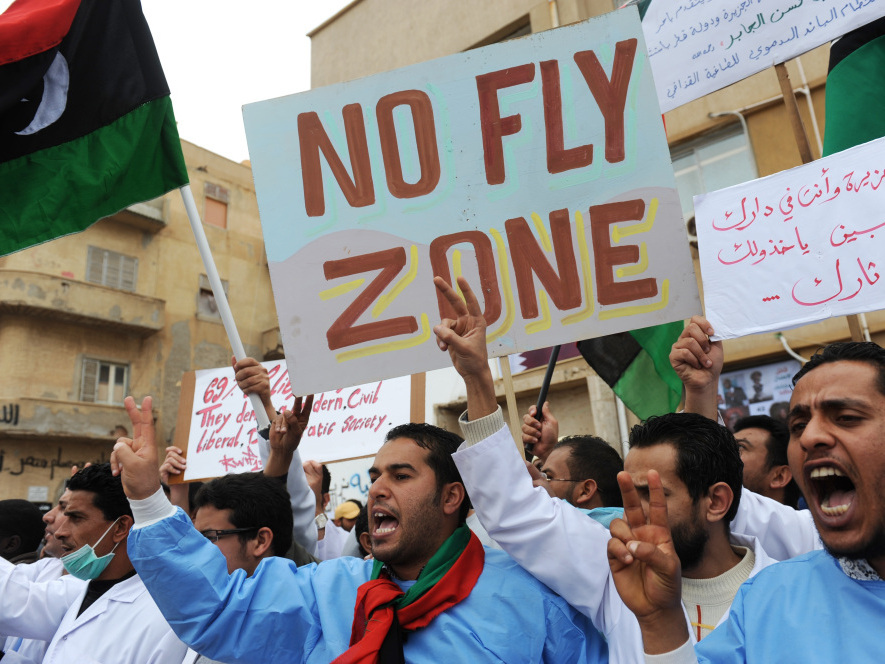 Doctors working at a local hospital join other protesters in calling for a no-fly zone over Libya at a rally in the eastern Libyan town of Benghazi on March 13.

Clinton's closed-door meeting with Jibril in a luxury Paris hotel was shrouded in secrecy until it happened, with neither the time nor the identity of her interlocutors announced beforehand. Neither Jibril, an official in the newly formed Interim Governing Council based in the eastern Libyan city of Benghazi, nor Clinton appeared or made any comments about their talks. Jibril met with Sarkozy in Paris last week before photographers and journalists.

The accelerated diplomatic push came as Clinton and other top diplomats from the Group of Eight prominent world economies were gathering in Paris for a previously planned foreign ministers meeting.

France, which has angered some allies by offering diplomatic recognition to Libya's opposition, said it is urgent to act against "barbarity" by Gadhafi's forces.

On Monday, Gadhafi's warplanes bombed a strategic opposition-held city, Brega, as his forces tried to push ahead in an offensive to retake the rebel-held east.

Fighting was centered in the oil port city, where government forces swept in on Sunday, pounding rebels with strikes from warships, tanks and warplanes. Rebels were dislodged from the port during the day, but said they moved back in at nightfall, destroying armored vehicles and capturing dozens of fighters from Gadhafi's elite Khamis Brigade.

There were conflicting reports as to who was in control of Brega. 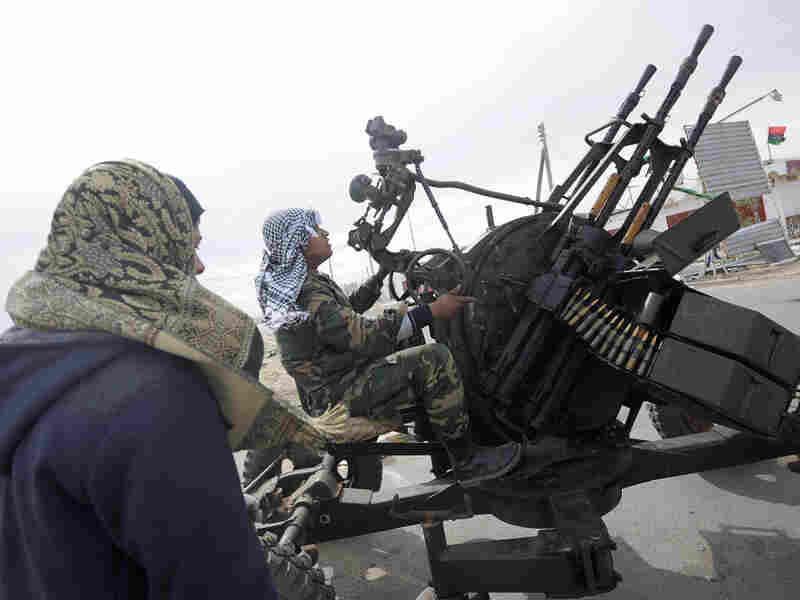 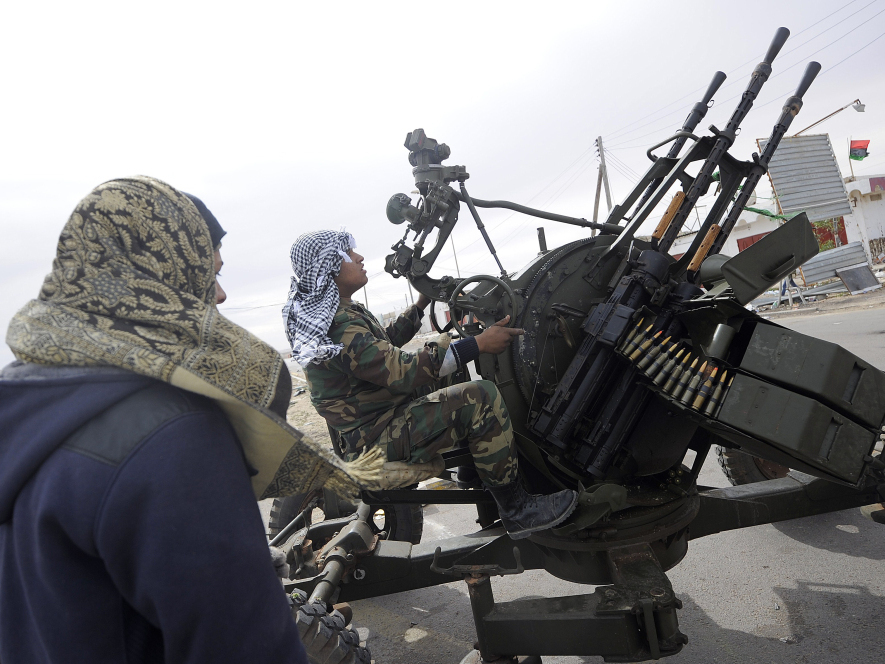 Libyan rebels man an anti-aircraft machine gun on March 13 in the town of Brega, before heavy shelling from forces loyal to Libyan leader Moammar Gadhafi.

In Libya's capital Tripoli, a Gadhafi stronghold, around 200 young regime supporters celebrated in the main square.

"We're talking about kids hanging out of cars and waving the government green flag and they were out there all day long and they were feeling pretty good," said NPR's David Greene reporting from Tripoli.

Greene spoke to one Gadhafi supporter, Shaban Akmada, who said he had a message for "Qaida." He said: "Stop killing the people."

The Libyan government has been on state-run TV in past weeks telling viewers that al-Qaida has brainwashed the people in the east who are protesting against Libyan leader Moammar Gadhafi.

And of the possibility of foreign intervention, he said: "All the Libyans ... we don't need foreign country come to here."

"There really is a sense of confidence here and certainly a sense [from the government] of trying to control the message," Greene said. "It's tough to feel like you are able to be free as a journalist and get out there and cover the whole story."

French President Nicolas Sarkozy and British Prime Minister David Cameron, in an letter to the EU president last week, said they supported "continued planning to be ready for all possible contingencies" in the Libyan situation "including a no-fly zone or other options against air attacks."

On Monday, Cameron said that time was of essence in responding to the situation in Libya, and NATO was drawing up contingency plans for a no-fly zone.

"Every day Gadhafi is brutalizing his own people. Time is of the essence," Cameron told the parliament in London. "There should be no let up in the pressure we put on this regime." He added: "No one is talking about invasion or boots on the ground."

Insurgents who control much of eastern Libya have called for a no-fly zone, as forces loyal to Gadhafi strike back with tanks and planes pressing eastward against the rebels.

British Foreign Secretary William Hague said Libyans will face a "nightmare" if Gadhafi regains control, insisting that the world is "reaching a point of decision" on whether foreign forces will impose a no-fly zone. Hague also said he "wouldn't exclude" amending a ban on arms exports to Libya so that weapons could be shipped to the rebels but that talks with allies on that are needed.

The Arab League has backed a no-fly zone, and Hague told BBC Radio Monday that "in cases of great, overwhelming humanitarian need" one could be enforced without a U.N. Security Council resolution.

French Foreign Ministry spokesman Bernard Valero pointed to an "urgency" to act because violence against civilians was increasing in Libya. He said France
also was working on a list of sanctions against Gadhafi's regime at the U.N. Security Council.

Other countries, including the United States, have been more cautious.
Germany's foreign minister, Guido Westerwelle, acknowledged that
the Arab League supported a U.N.-approved no-fly zone, "but at the
same time, it rejected any form of foreign, international intervention."

"These are questions that have to be discussed, these are not clear signals being sent, because a no-fly zone would be a military intervention," he said in Berlin.

Westerwelle said the Arab League would need to "not just support but also participate" in any action beyond targeted sanctions. He also stressed that Germany and other European countries don't want to be drawn into a long-lasting war in North Africa.

Italy, a G-8 member that has close economic ties to Libya, has said it would support a no-fly zone, but is against unilateral actions by its allies. Before flying to Paris, Foreign Minister Franco Frattini said Italy believes the Libyan crisis requires "an immediate cease-fire accompanied by international measures."
He echoed the sense of urgency.

"If these decisions come too late, they nullify the goal of preventing Gadhafi from carrying out a massacre," Frattini said. A no-fly zone could be a deterrent, he said.

Gadhafi's troops have been emboldened by some victories as they try to push east along Libya's main Mediterranean coastal highway. But their supply lines are stretched and their dependence on artillery, airstrikes and naval attacks makes it hard for them to swiftly consolidate control of territory, particularly at night.

For the past week, the two sides have been battling for control over two little-populated oil ports, Brega and Ras Lanouf — which Gadhafi's forces captured days ago. But even if government troops take Brega as well, they may face even tougher resistance if they try to move further east, on the heavily populated cities that the opposition holds. The first of those cities is Ajdabiya, about 30 miles east of Brega.

Warplanes struck three targets in Ajdabia on Monday morning — one just missing the main opposition weapons warehouse and another strikes rebel fighters massed at the western entrance of the city, said a doctor at an Ajdabiya hospital. Six fighters were wounded, he said, speaking on condition of anonymity for fear of retaliation from Gadhafi's regime. The third strike hit the compound of a Turkish company in the city, he said.

Ahmed al-Zwei, a rebel official on the city's council, said it appeared the warplanes were trying to cut supplies to the rebels holding Brega.

The doctor, receiving reports from fighters returning from the front, said the rebels on Sunday initially fled Brega in the face of bombardment, but then pushed back in later in the day, battling Gadhafi troops who arrived by sea. The rebels retook the area and even pushed a little further west, he said. The doctor, echoing other rebels, said Gadhafi's forces appeared to be short on troops, meaning they could not hold ground they had forced the rebels from.

"They can't advance by land. They know that," he said.

The regime forces' most effective weapon so far appears to have been use of overwhelming bombardment — mainly by artillery, tanks and rockets, as well as with warplanes, hitting the poorly organized rebels trying to move in a desert region with little cover.

NPR's David Greene reported from Tripoli and NPR's Michele Kelemen from Paris. This story contains material from the Associated Press.