Accessibility links
We Are Just Not Digging The Whole Anymore We care more about the parts and less about the entire. We are into snippets and smidgens and clips and tweets. We are not only a fragmented society, but a fragment society.

We Are Just Not Digging The Whole Anymore

We Are Just Not Digging The Whole Anymore 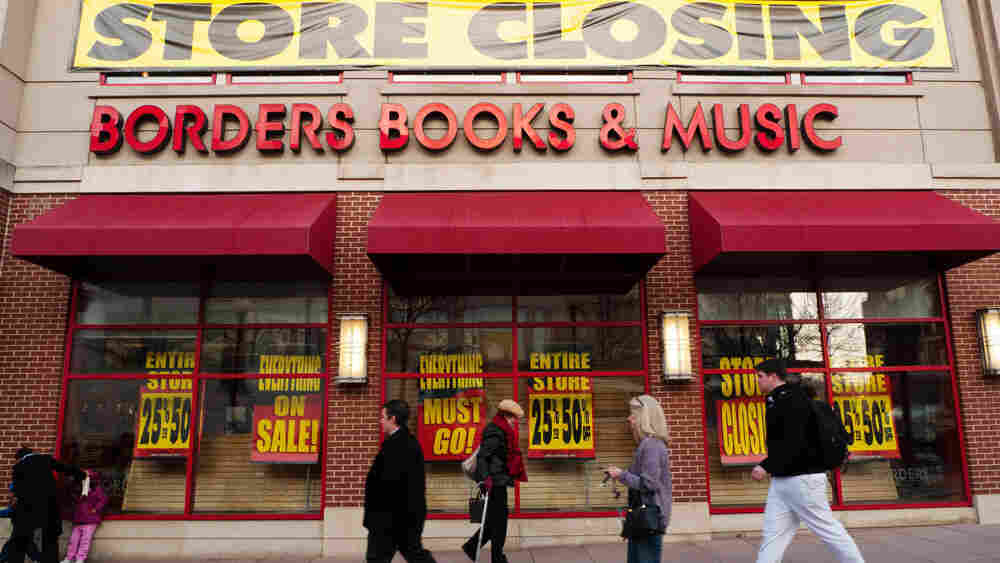 Stop by one of the 200 or so Borders stores that soon will be closing, and you can pick through the rubble. Under the Everything Must Go signs, you will find the building blocks of the last half-century of popular culture — in discounted disarray.

Here are the self-help books that promise to make us better people. There are the novels — by Tom Clancy and Janet Evanovich — that make us think about the world we've created. Over there are history tomes and workout tapes and compilation CDs and bright boxes containing the do-it-yourself language course Rosetta Stone.

Most of these are well-conceived, thoughtfully crafted objects — colorfully packaged, gift-wrap ready — for the home, the office, the dorm room, the nursery. They are whole things — meant to be consumed from beginning to end, front to back, A to Z.

The problem is: We just don't do whole things anymore. We don't read complete books — just excerpts. We don't listen to whole CDs — just samplings. We don't sit through whole baseball games — just a few innings. Don't even write whole sentences. Or read whole stories like this one.

Long-form reading, listening and viewing habits are giving way to browse-and-choose consumption. With the increase in the number of media options — or distractions, depending on how you look at them — something has to give, and that something is our attention span.

We care more about the parts and less about the entire. We are into snippets and smidgens and clips and tweets. We are not only a fragmented society, but a fragment society.

And the result: What we gain is the knowledge — or the illusion of knowledge — of many new, different and variegated aspects of life. What we lose is still being understood.

"I don't read books ... in my real job," says Curt Emanuel, who works in the Cooperative Extension Service in Agriculture at Purdue University. "The people I work with need the most up-to-date information to resolve current issues."

A book, Emanuel says, will generally take several years from conception to publication. "By the time it's in print, it will usually be several years out of date," he says. "If I'm working with, say, a farmer on developing a fertility program for his corn crop for this coming year, I'll want to look at field trials done within the last couple of years on corn hybrids he or she is using. For that, it takes recent articles and research — the information is just better than that contained in a book which may already be outdated. "

Reader's Digest has been capitalizing on this phenomenon for years. Now there are lots of websites that present whole books and concepts in nano form. "No Time to Read?" asks BusinessSummaries.com. "Discover the Latest Trends, Ideas and Concepts ... in Minutes!" Springwise.com advertises "business books served in bite-sizes for e-readers." And Twitter for Business is a guide "designed for people who don't have time to read lengthy e-books and who need to get up to date quickly."

RinkWorks, an entertainment website, serves up Book-A-Minute classics, which is basically a list of spoiler alerts. Here is the ultra-condensation of Pride and Prejudice by Jane Austen:

Mr. Darcy: Nothing is good enough for me.

Ms. Elizabeth Bennet: I could never marry that proud man.

(They change their minds.)

On Monday, the Pew Internet & American Life Project reported that nearly half of all adults — 47 percent — get some of their local news and information on mobile computing devices. We are receiving our news in kibbles and bits, sacrificing context and quality for quickness and quantity.

Fewer and fewer gamers are following gaming storylines all the way to completion, according to a recent blog post on the IGN Entertainment video game website. The post marvels at the statistics provided by game developer Bioware. The data show that only 50 percent of people who play Mass Effect 2, Bioware's popular space-age role-playing-game, actually finish Commander Shepard's mission to stop the Collectors.

Audiences for broadcast television have declined while the number of people watching YouTube and Hulu — sites specializing in abbreviated material — has risen.

"Long-form reading, listening and viewing habits are giving way to browse-and-choose consumption," says Adam Thierer, a senior research fellow in the Mercatus Center's Technology Policy Program at George Mason University. "With the increase in the number of media options — or distractions, depending on how you look at them — something has to give, and that something is our attention span."

Why should we be surprised that everything has been sliced and diced like so many pimentos. In this age of "packet switching," every itsy-bitsy piece of information that we shoot through the Internet is Ginsu-knifed into smaller bits — each of which takes its own, independent path to its final destination, where hopefully all the bits are reintegrated back into wholeness.

In A Small Corner Of YouTube, A Web Star Is Born

The Selective Subculture Of 'Fantasy' Gamers

Steve Harvey: A Comedy King Looks To Speak Across A Cultural Divide

This "whole" process reminds mathematician Daniel Rockmore, a Dartmouth professor and author of Stalking the Riemann Hypothesis, of a transporter — the fictional teleportation machine used to "beam up" characters in the Star Trek universe. Transporters could break up a traveler — or dematerialize him — then "beam up" his body and "rematerialize" it back into a whole being.

"There is some theorizing," Rockmore says, "that perhaps this is the way the brain works."

Rockmore believes that the way many people learn — or try to learn — these days is via this transporter technique. "The truth is," he says, "that modern pedagogy probably needs to address this in the sense that there is so much information out there, for free, so that obtaining it — even in bits and pieces — is not the challenge, rather integrating it into a coherent whole is. That's a new paradigm."

Rockmore goes on to relate our partiality to parts to a relatively new discipline: complex systems. The thinking, he explains, is that the notion of complex systems provides a rough framework for many phenomena (the brain, societies, ecosystems, economies, markets, etc.) as collections of "agents" (neurons, people, species, businesses, buyers and sellers, etc).

These agents "interact individually according to relatively simple rules, but in aggregate create highly unexpected phenomena," he says.

Maybe our contemporary fascination with fractional information — snippets and excerpts and clips and samplings — instead of whole-number information is a swinging of the pendulum, from wholeness to fractionality, Rockmore says. "And that when the pendulum swings back, we'll actually have something that is more than the sum of its parts — as we learn how to integrate all these bits and pieces into a greater understanding of the world."

Adam Thierer also sees a bright side. The tilt toward abbreviation doesn't necessarily mean "that we're all growing stupid, or losing our ability to think, or losing our appreciation of books, albums or other types of long-form content," Thierer says. "We just don't spend as much time with them as we used to. It's the cost of life in an age of information abundance."

But, he adds, "I'll take that over life in the past age of information poverty any day of the week. More people have more access to more information than at any time in human civilization. That's a victory, even if it does come with some growing pains."