Accessibility links
Humanitarian Aid Needed For Japan Japan, with the world's third largest economy, has significant disaster, health and safety infrastructures. And the nation has rolled out its own rescue effort. But the enormous scope of the still-unfolding tragedy means that the country will need help from around the world. 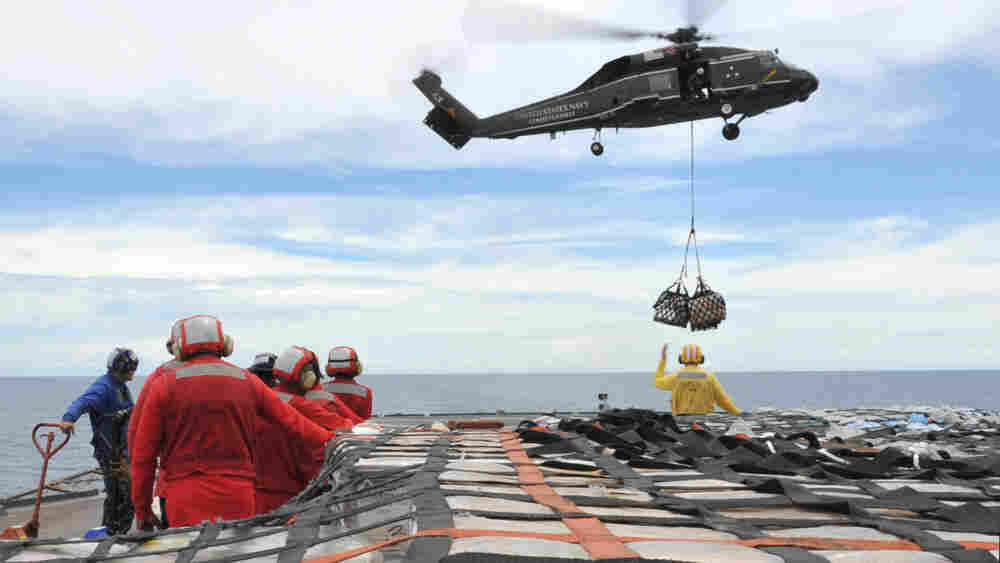 Donations and offers of humanitarian aid for victims of Japan's earthquake and tsunami have been pouring in since the island nation was hit by the twin disasters Friday.

And as Japanese struggled Monday to count their dead and get desperately needed supplies to devastated areas, top U.S. officials at both government and assistance agencies put out a simple message: Donate cash.

In addition to the American Red Cross, the United States Agency for International Development works with the Center for International Disaster Information at CIDI.org. They coordinate aid from individuals, groups, corporations and the diaspora population.

Amazon.com has been accepting Japan-targeted donations and passing them to American Red Cross.

The online coupon site Groupon has set up a page for donations to the International Medical Corps' relief efforts in Japan.

The American Red Cross, Verizon and AT&T are among organizations and companies that are soliciting relief effort donations via text.

Free information on America's charities can be found at Charity Navigator and at Better Business Bureau's Wise Giving Alliance.

The Chronicle of Philanthropy has been tracking donations to aid victims in Japan.

UNICEF announced it is raising funds to help children affected by the recent earthquake and tsunami.

"Nothing will get there faster, and nothing will help more," says Rebecca Gustafson of the U.S. Agency for International Development (USAID).

Japan, with the world's third largest economy, has significant disaster, health and safety infrastructures. And, with the largest mobilization of its highly trained military since World War II, the nation has rolled out its own massive rescue effort.

But the enormous scope of the still-unfolding tragedy — and the looming specter of possible nuclear disaster — means that the country will need help, some now and more eventually, officials say. But it should be up to the Japanese, they say, to decide what is needed and when. And cash provides the greatest flexibility for filling needs as they are identified.

"The logistical pipeline is already stressed," Gustafson said, during a briefing sponsored Monday by the U.S. Chamber of Commerce's Business Civic Leadership Center. Getting "stuff" into the country, she says, can complicate aid efforts. "The most important thing to remember: The government of Japan is still trying to learn what it needs."

On Monday afternoon, The Chronicle of Philanthropy reported that at least $12 million has come in to charities raising money to aid victims in Japan.

"We are great friends with the country of Japan and the people of Japan," Gustafson says. "We try to make sure that what we're providing is exactly what a country is asking for."

The U.S. military is also working closely with its Japanese counterparts on search and rescue missions, and is providing other assistance as requested, says Dan Piccuta, Pacific outreach director for the U.S. Pacific Command.

That includes using the aircraft carrier USS Ronald Reagan, which was en route to a military exercise in South Korea when it was diverted to the waters off Japan.

The ship has been used as a platform, Piccuta says, for refueling Japanese helicopters involved in search and rescue missions. The U.S. military has also assisted in humanitarian aid drops, and conducted surveys of areas affected by the disasters, he says.

The U.S. military, which regularly participates in disaster response exercises with Japanese military personnel, has been in constant contact with authorities in Japan, says Piccuta, who characterized the relationship between the two countries as friendly.

More than 500,000 people who lost their homes to quake damage or the tsunami, or have been evacuated from areas near compromised nuclear plants, are currently being housed in temporary shelters, according to the American Red Cross. 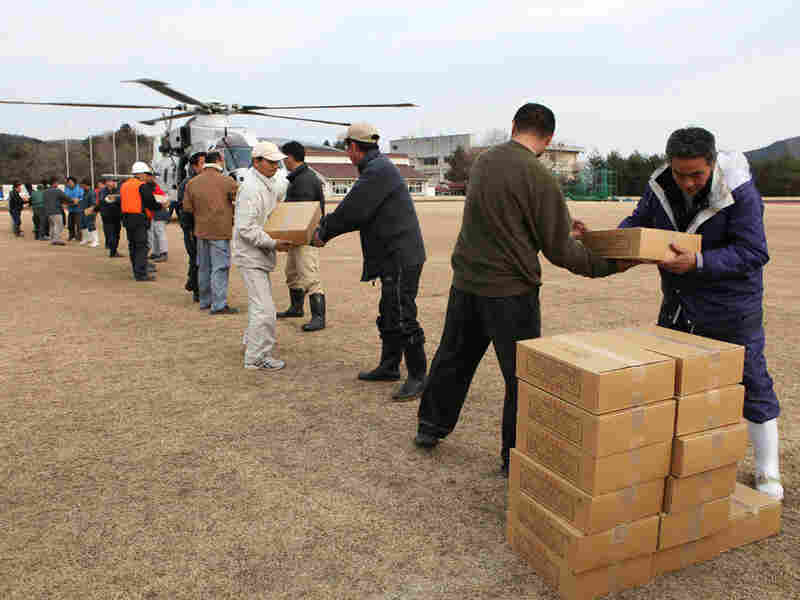 Local residents and town staff carry out relief supplies from a helicopter in the town of Onagawa in Miyagi prefecture on Monday, three days after a massive 8.9 magnitude earthquake and tsunami devastated the coast of eastern Japan. Jiji Press/AFP/Getty Images hide caption

At least a million people are without electricity and water. Mobile phone service has been disrupted, as has the nation's transportation system.

"About 300,000 were probably saved through evacuation," he said. "The preparedness extends down to training school kids at the community level, to marking footpaths to higher ground."

Unlike in countries devastated by the 2004 Indian Ocean earth quake and tsunami, or in Haiti, struck by an earthquake last year, the Japanese also have in place "pre-agreements" that establish where the shelters will be located, who will run them, and how they'll be serviced, Preslan says.

"Japan is certainly one of the most prepared for national disasters in the world," he said.

That makes coordination of aid easier, as does the fact that the Japanese Red Cross actually operates hospitals in Japan, and can draw from those resources to create field medical teams, and to organize "psycho-social" health counseling.

"But all the folks in shelters — there will be a need to continue to take care of them, to provide food and water," he says.

Emotions Fuel Searches For The Missing In Japan

The Red Cross is also providing a "family linking" online service through www.redcross.org, which allows those affected by a disaster to report their status for family members searching for them.

The Oldest And Youngest Victims

Donna Porstner of AmeriCares, a nonprofit relief organization that helps with emergency medical needs, says that although Japanese hospitals are well-stocked, they'll likely soon start running out of supplies.

"It's still very early, but there have been some identified needs: There's a very large elderly population," Porstner says, "and that drives a need for oxygen, chronic care medicine, over-the-counter drugs, and hygiene products for those in shelters."

AmeriCares solicits donations from pharmaceutical and medical supply companies and accepts donations to pay for flights to deliver the goods. Its staff is searching for ways to help victims who may need dialysis, for example.

Time will tell, she says, whether they will have to assist in delivering medicines that help with radioactive poisoning.

At Save the Children, Annie Foster says that the child-focused aid organization has two teams in Sendai, perhaps the hardest-hit city in Japan.

"Even developed countries lose sight of the needs of children," she says, estimating that about 100,000 children have been affected or evacuated as a result of the disaster.

They'll open their first "child-friendly" space tomorrow in one of the camps for those who have been displaced.

Able, But Still In Need

John Malott, president of the Japan-America Society of Washington, says that the Japanese government is "very capable of handling" the disaster aftermath. But it will need to expand its capabilities with international help, he says. "The most important thing is to get money in the hands of Japanese relief organizations," he says.

Malott, along with officials at USAID and others, recommend that donations be made to the American Red Cross, which can direct the money to the Japanese Red Cross, or other reputable direct aid organizations.

"America and Japan have been great friends and allies for 65 years," Malott says. "If there is any cultural hesitation in accepting aid, it's that Japan, with one of the largest foreign aid budgets in the world, sees itself as a donor rather than a recipient."

"But this is overwhelming."