Accessibility links
Algeria's Violent Past Helps Keep Lid On Dissent The North African country of Algeria has watched as popular revolutions have erupted in Tunisia, Egypt and Libya. Algeria has the same problems as its neighbors: massive youth unemployment, poverty, corruption and a long entrenched political regime. 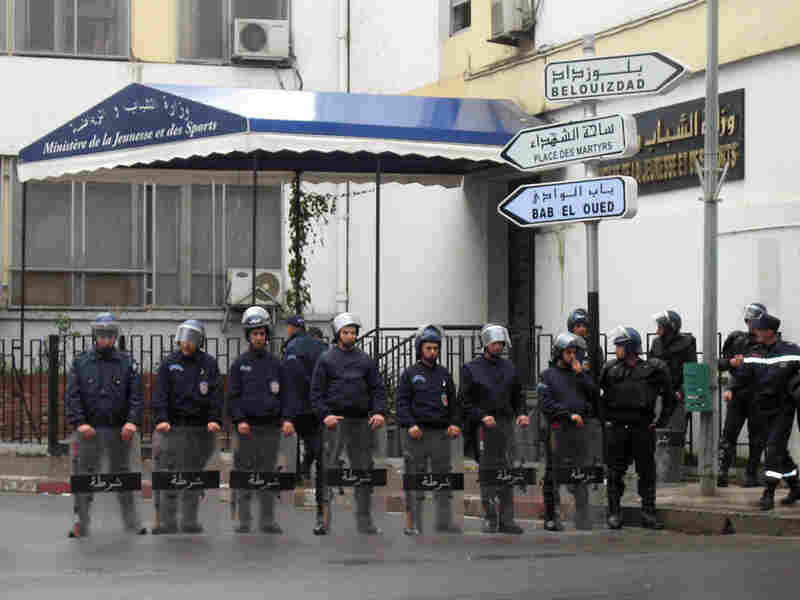 Police line a road at May 1 Square in Algiers, where demonstrations have been taking place for the past five weeks. Eleanor Beardsley/NPR hide caption

The North African country of Algeria has watched as Tunisia , Egypt and now Libya erupt in popular revolutions.

Algeria has the same problems as its neighbors: massive youth unemployment, poverty, corruption and a long entrenched political regime.

But its own recent violent history may push Algeria along a different path.

Every week for the past five weeks, demonstrators have gathered in May 1 Square in Algiers to demand greater freedom and democracy. And every week they are dispersed by squads of well-equipped and heavy-handed riot police.

This week, a demonstration by fewer than 100 protesters was forcefully broken up in a matter of minutes. The Algerian capital is crawling with police. The government is trying to keep a lid on dissent — it's also trying to buy social peace.

"We have a good situation because we have no debts," says Nacer Mehal, Algeria's minister of communication. "We have a good reserve of money. So that's allowed the government to face many problems."

Mehal is speaking about the roughly $150 billion of currency reserves Algeria has earned from its oil and natural gas — one reason Algeria's riot police are said to be better equipped than those of France or Germany.

Algerians wonder why poverty is growing when the country is so rich. But now, says Mehal, the government is using that money to create jobs, especially for young people. It's also offering loans to small businesses, and plans to speed up construction to meet the severe lack of housing.

Said Sadi, head of the main opposition party, has pictures of the police manhandling him. He says that since the Arab revolutions began, the government here has been frightened, with good reason. The Algerian regime, he says, simply cannot go on.

"This country has been run by the same forces since independence in 1962," Sadi says. "The names change, but the invisible political police control just like the KGB. They decide elections and manipulate justice."

Even so, there appears to be little hatred for the aging President Abdelaziz Bouteflika, who has been in power since 1999. Most people say he has done good things for the country; they say Algeria has a measure of democracy, its press is relatively free, and no one seems afraid to speak to foreign journalists. 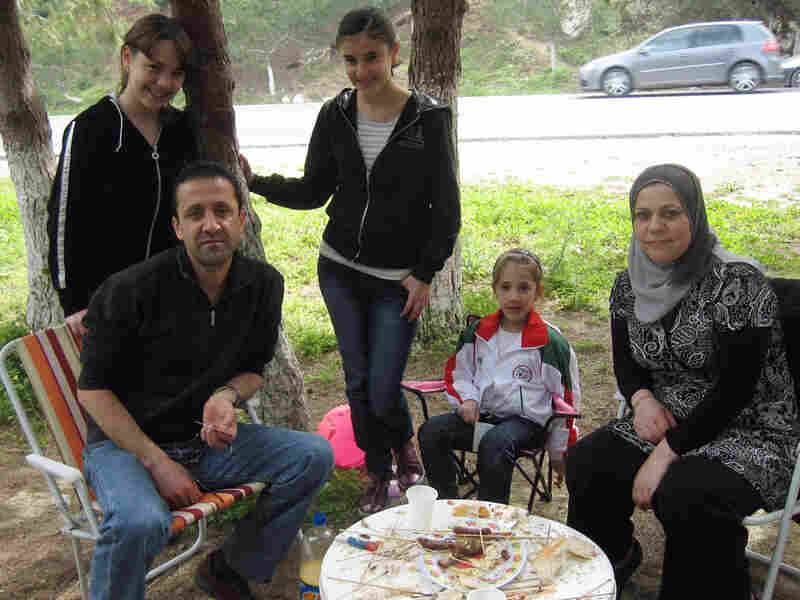 The Chilla family, like many others from Algiers, travels outside the city on weekends. Here they picnic near the coast. Mourad Chilla says the situation in Algeria is different from that in Tunsia and Egypt. "We have liberty," he says. Eleanor Beardsley/NPR hide caption

But Algeria is clearly a police state. Its people are frustrated and discouraged, and corruption is endemic.

Anxiety Over What Lies Ahead

Families from Algiers head out of the city on weekends to picnic. On a recent day, the Chilla family grills shish kebabs in a pine forest along the Mediterranean coast.

Father of three Mourad Chilla says Algeria is not the same as Tunisia and Egypt.

"It's different. We have liberty," he says. "We're a people that does what it wants. We can travel, we work how we want. The power isn't so severe."

The Chillas reflect what's on every Algerian's mind: The country's civil war of the 1990s — "The Black Decade" — a brutal conflict between Islamists and the security forces that left more than 200,000 dead, most of them innocent civilians.

So even though many Algerians will admit their political system is broken — and that young people have no future — they are nervous about what might lie ahead. Change must come, they say, but this country simply cannot take another violent upheaval.