Accessibility links
China Acts Fast In Aiding Japan Post-Earthquake Relations between Japan and China have been traditionally tense. But China moved quickly to help Japan with disaster relief efforts. What's not yet clear is whether this burst of neighborly concern will have a lasting effect on ties. 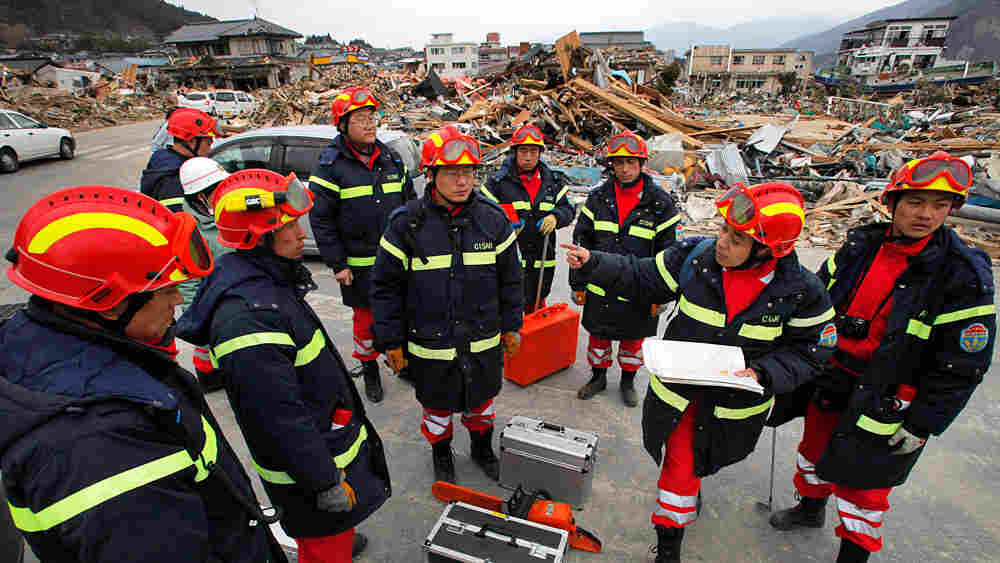 Members of the Chinese rescue team are briefed by their leader in Ofunato, Iwate prefecture, Japan, on Tuesday. Itsuo Inouye/AP hide caption

Japan's emergency has provoked sympathy around the world, including from its near neighbor China, with whom relations have been traditionally tense.

China has acted fast, sending disaster relief and organizing the evacuation of its own citizens from the disaster zone. This disaster also has caused some Chinese to view Japan through fresh eyes.

China's 15-person search-and-rescue team was dispatched speedily to the Japanese quake zone. This was in part to reciprocate the help given by a Japanese military team that aided China after its own massive earthquake in Sichuan three years ago. As the first Japanese troops in China since the end of the brutal Japanese occupation, their presence was politically charged.

When China's Premier Wen Jiabao gave his annual press conference Monday, it was hard not to wonder whether troubled bilateral ties were the reason it took him 2 1/2 hours to get around to expressing his condolences.

"I want to use today's opportunity to extend our deep condolences over the lost lives in this disaster and express our sincere sympathy to the Japanese people," he said, just before winding up. "China is also a country that is prone to earthquake disasters, and we fully empathize with how Japanese feel now."

China is stepping up. It's sending $4.5 million worth of rescue materials, including blankets and flashlights. Beijing has promised more, if necessary.

China's coast guard says it has a cutter on standby to help Japan's earthquake relief operations. If that mission goes ahead, it would mark the Chinese coast guard's first-ever participation in an international relief effort.

From the humanitarian perspective, I support it. But from a historical perspective, I do not. People my age believe Japan ought to be wiped out. During the Japanese occupation, they killed so many Chinese people.

But many Chinese, like 66-year-old Zhang Qinglong, are conflicted about this aid.

"From the humanitarian perspective, I support it," he says. "But from a historical perspective, I do not. People my age believe Japan ought to be wiped out. During the Japanese occupation, they killed so many Chinese people."

On the streets, instinctive anti-Japanese nationalism is not unusual. Shockingly, online posts have been written celebrating Japan's misfortune. But at the same time, a new respect is emerging for Japanese virtues. People have seen pictures of orderly queues of evacuees, they've noticed the care and courtesy with which Japanese survivors have treated each other, and they've commented upon the lack of price-gouging in the Japanese quake zone. This stands in stark contrast to what happened after China's earthquake, prompting some introspection.

"I am amazed at how well the Japanese are behaving," says Tang Zhaoxin, "and I think we should enhance the quality of our national behavior."

"Japanese are very cultivated, mainly because of their education. They remained calm in the face of disaster," says Mr. Hai, admiringly.

"These are barbs aimed directly at China," says Kaiser Kuo, head of international communications at the Chinese search engine Baidu, who's been tracking online response to the Japanese disaster.

One particular example that has sparked interest among Chinese netizens is a description of how Japanese teachers shielded their students with their own bodies during the tremors. This stands in stark contrast to the behavior of one infamous Chinese teacher, Fan Meizhong, during the Sichuan earthquake. He was nicknamed Runner Fan for being the first to flee when the earth began moving, abandoning his students inside the classroom, as he ran to the safety of a playing field.

Kuo says the shift in tone toward Japan is significant.

"This really is the first time that I've seen a broad netizen response toward Japan swing in the direction of genuine admiration for some aspects of Japanese culture," he says.

Even the Communist Party mouthpiece has softened its tone.

"We have already seen People's Daily come out with editorials really excoriating people who've been harsh on Japan, who've shown a lack of sympathy," says Kuo. "It's an unusual thing to see — editorial direction that encourages you to be sympathetic to Japan is a rarity indeed. But I'm very encouraged by it."

Millions of Chinese have clicked on links to "Pray for Japan." And a video has been posted online with words of encouragement for Japan from the victims of the Sichuan earthquake. The message: "Be strong."

What's not yet clear is whether this burst of neighborly concern will have a lasting effect on ties. If radiation from Japan starts to be detected in China, that sympathy could be very short-lived indeed.