Accessibility links
States' Abortion Legislation Questioned By Critics At least 20 states have passed laws that require doctors either to offer women ultrasounds or to perform one. Seven others are now considering bills that would mandate the ultrasound. Abortion-rights activists say these bills show a renewed vigor by states to enact more limitations on abortion. 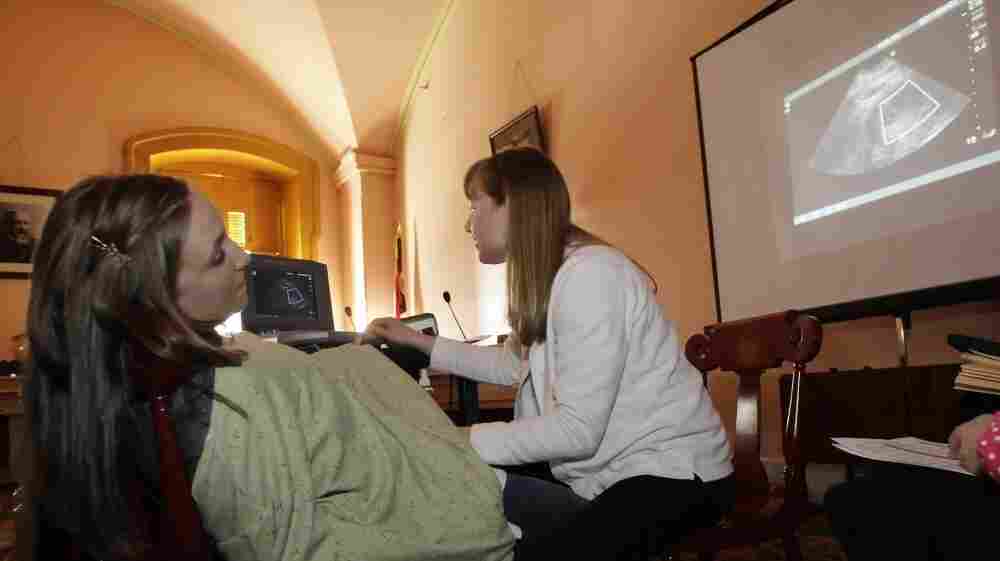 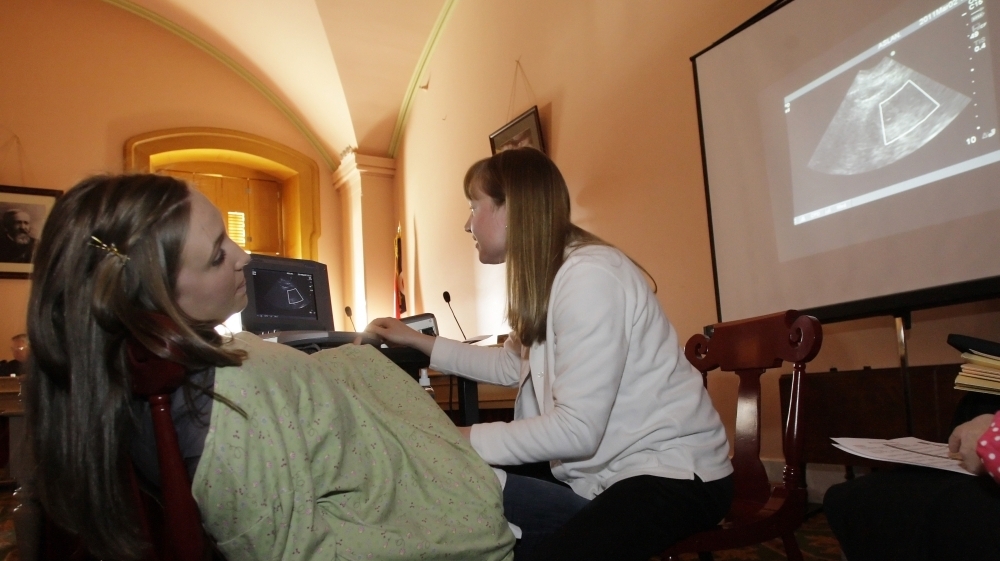 Registered nurse Julie Aber (right), of the Ashland Care Center in Ohio, administers an ultrasound to Erin Glockner, as testimony on House Bill 125 continues in Columbus on March 2. House Bill 125, also known as the heartbeat bill, prohibits abortions after the first detectable heartbeat.

State legislatures are considering a new wave of abortion restrictions this year. Some require longer waiting periods to get abortions. Others would direct doctors to show women ultrasounds of fetuses.

But critics say new conservative lawmakers are pushing these bills to test the limits.

If South Dakota Gov. Dennis Daugaard signs a newly passed bill, women seeking abortions will now have to wait 72 hours after their initial visit to a clinic before having the procedure done in that state. The bill also requires counseling at a crisis pregnancy center.

"We already know that it's an unborn child that's being aborted, and a 72-hour wait time is certainly not too much to consider when you're taking the life of an unborn child," says Valerie Johnson, of South Dakota Right to Life.

However, according to Sarah Stoesz of Planned Parenthood of Minnesota, North Dakota and South Dakota, it is not a second opinion because crisis pregnancy centers do not provide unbiased counseling.

"The mission of a crisis pregnancy center is to talk women out of having abortions. That's not the same thing as offering an opinion," Stoesz says.

Most states require a 24-hour waiting period. Stoesz says a longer period would mean several trips to a clinic, which for some women in this rural state is hours away. Daugaard is expected to sign the bill.

At least 20 states have passed laws that require doctors either to offer women ultrasounds or to perform one. Seven others are now considering bills that would mandate the ultrasound.

In Texas, the House and Senate have passed two versions of a bill requiring sonograms before women could have abortions. Doctors would also have to offer to show women the image, provide a detailed description, and allow women to hear a heartbeat if one is audible.

"This bill is one of the most invasive bills in the U.S.," says Sarah Wheat, who works with Planned Parenthood of Texas. "And at the end of the day it doesn't make women healthier and it doesn't help prevent the need for abortion."

Wheat says the bills amount to government intrusion into a private medical decision. A similar measure that passed in Oklahoma last year is now being challenged in court.

"The time is right, and we have the votes," says Elizabeth Graham, who leads the group Texas Right to Life. "And the language has been streamlined to be really effective and to protect the rights of women when they are in abortion clinics considering an abortion." Graham sees the bill as an expansion of the informed consent process and something widely supported by state legislators.

Texas Gov. Rick Perry has made the bill a priority and he has promised to sign whatever compromise version is passed.

But abortion-rights activists say these bills show a renewed vigor by states to enact more limitations on abortion. They point to Ohio, where lawmakers are debating a bill that would ban abortions if a fetal heartbeat is detected. 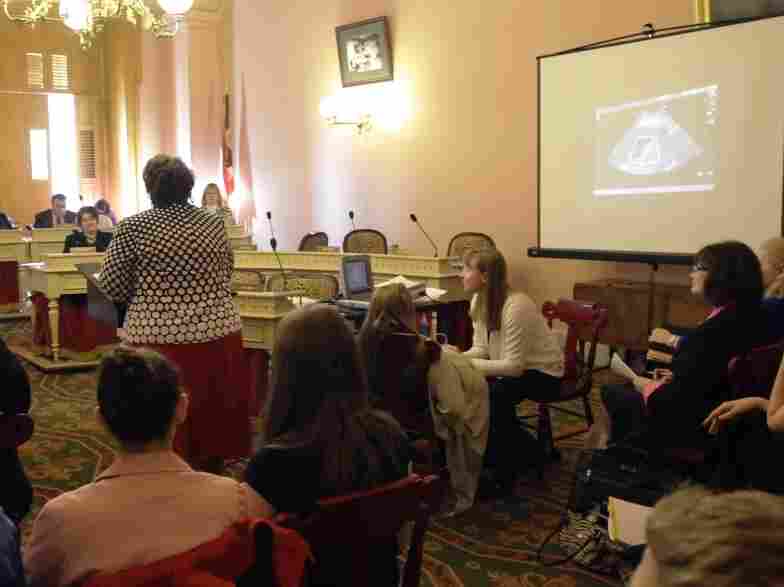 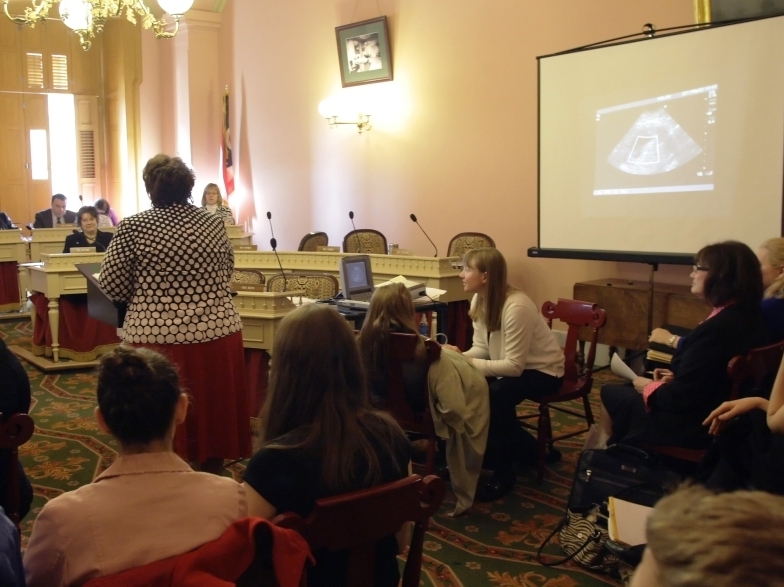 Recently, two pregnant women got ultrasounds before a packed committee hearing room. The images were displayed on a screen as technicians struggled to find the heartbeat of a 9-week-old fetus.

"And again I apologize, but babies do their own thing and they are moving. So you see that this is an active growing baby. This is not just a blob or something that's just kind of sitting there doing nothing," said Ducia Hamm, of the Ashland Care Center.

Abortion-rights activists have called the bill a stunt and say it would amount to an outright ban on abortion. Some suggest newly elected legislators in Ohio and other states just want to test the waters when it comes to abortion.

"This past November, a whole new crop of state legislators came into office, and these legislators tend to be more conservative," says Elizabeth Nash of the Guttmacher Institute, which tracks abortion laws. "And they're not only pushing the envelope on abortion restrictions; they're even taking it further to try new approaches to restricting abortion."

In Ohio, the state Right to Life group does not support the fetal heartbeat bill. The group says if it passes, it would be overturned in court. It's likely the measures in both South Dakota and Texas will also face legal challenges.