Accessibility links
Japan Triggers Shift In U.S. Nuclear Debate The crisis unfolding at a nuclear power plant in Japan is already having an effect on policy debates in the United States. President Obama's call for $36 billion in help for the nuclear industry may now be at risk. 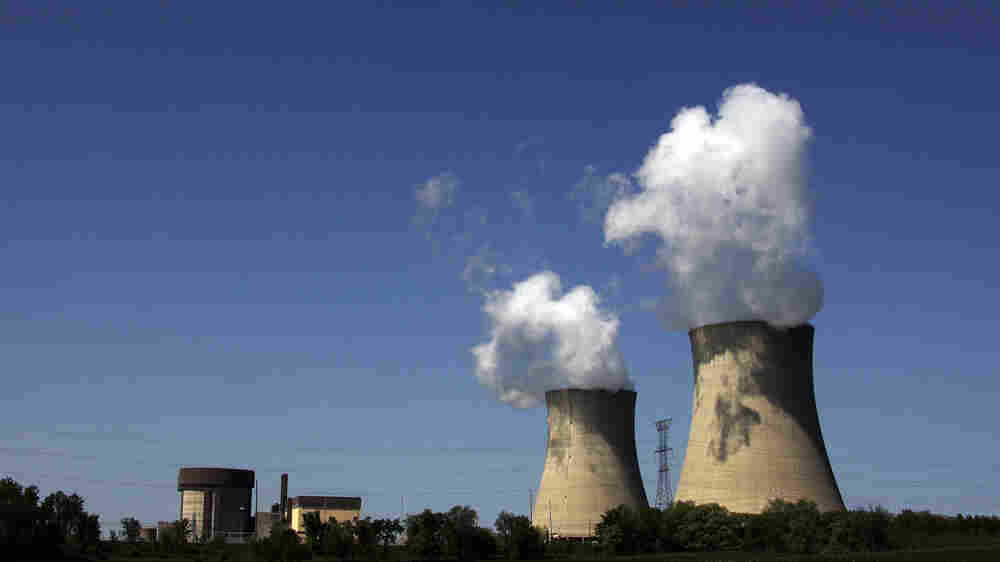 The nuclear power industry had been experiencing something of a rebirth in the United States, following decades of doubt. That's been put at risk by the crisis unfolding at a nuclear power plant in Japan in the wake of a devastating quake and tsunami there.

With that situation still in flux, attention should remain focused on dealing with the immediate safety issues in Japan, says Jim Owen, a spokesman for the Edison Electric Institute, an association of electric utility companies.

"There will be plenty of time later on for a, hopefully, thoughtful dialogue," Owen says.

"There are some serious problems, even without the Japan crisis," says Richard Caperton, an energy policy analyst at the Center for American Progress, a progressive think tank.

"Even though we have a very safely operated fleet of plants in the U.S., there's always the risk that something very bad could happen," he says.

A Long Time To Recover

Nuclear power plant construction had been largely moribund in the U.S. for decades following a partial core meltdown at Three Mile Island, a nuclear plant in Pennsylvania, in 1979.

The plant's containment system was ultimately not breached. But safety concerns were heightened nonetheless — and were exacerbated by the near-simultaneous release of The China Syndrome, a popular film dramatizing nuclear meltdown.

"Nuclear orders were already down," says Tom Cochran, a senior scientist in the nuclear program at the Natural Resources Defense Council, an environmental advocacy group, "but Three Mile Island was the final straw that ended commitment to any new reactors for more than two decades."

"I don't know if concerns about reducing our dependence on foreign oil or $4-a-gallon gas prices will trump renewed worries about nuclear power," says Karlyn Bowman, a polling expert at the conservative American Enterprise Institute.

President Bush embraced nuclear power as a means to help the U.S. achieve greater energy independence. And nuclear power, which accounts for 20 percent of the nation's supply of electricity, began in recent years to win over some unexpected allies in the environmental community.

Environmental activists had long been skeptical about nuclear power because of concerns about safety and disposal of toxic waste. But some embraced nuclear as a carbon-free energy source that could cut down on greenhouse gases that contribute to climate change.

"Nuclear energy is the only non-greenhouse-gas-emitting power source that can effectively replace fossil fuels and satisfy global demand," Patrick Moore, a co-founder of Greenpeace, wrote in 2005.

The Debate In Washington

It's that pot of money that will now be subject to greater scrutiny in Washington. On Wednesday, the House Energy and Commerce Committee, which had already been set to look into energy and nuclear funding, is set to question Energy Secretary Stephen Chu and other administration officials about the incident in Japan and its meaning for the U.S.

"I don't want to stop the building of nuclear power plants," Joseph Lieberman (I-CT), who chairs the Senate Homeland Security and Governmental Affairs Committee, said on CBS's Face the Nation Sunday. Lieberman has been a nuclear power proponent.

"But I think we've got to quietly put ... the brakes on until we can absorb what has happened in Japan as a result of the earthquake and the tsunami," Lieberman said, "and then see what more, if anything, we can demand of the new power plants that are coming on line."

Three days before the quake struck Japan, John Rowe, the chairman of Exelon Corp., which is the nation's largest operator of nuclear power plants, had said he would not be investing in any more because they cannot compete with natural gas at current prices. He also called on Congress not to expand the nuclear loan guarantee program beyond the $18.5 billion allocated under the Bush administration.

Nuclear power proponents say that the domestic industry will apply any lessons available from the situation in Japan. They have traditionally stepped up safety efforts in the fact of new challenges, such as the risk of terrorism following the 2001 attacks on the World Trade Center.

"It's absolutely true that once the investigations are completed after the situation is stabilized, any lessons that can be gleaned by that will be applied by the industry, not only in the U.S. but around the world," says Owen, the Edison Electric Institute spokesman.

On its website, the Nuclear Energy Institute, an industry trade group, says it would be "premature to draw conclusions from the tragedy in Japan about the U.S. nuclear energy program."

"We remain fundamentally committed to nuclear power and the expansion of nuclear power in the U.S. as a safe and clean emissions-free source of electric generation," Owen says.

Cochran, the NRDC scientist, says that the nuclear industry won't win with arguments that the plants in Japan faced challenges that are different from those in the U.S.

He says that the industry was able to make such a case following the 1986 Chernobyl explosions. That plant had a significantly different design from that of plants in the U.S., and the Soviet safety culture was considered weak.

"But here you have an industry, the Japanese nuclear industry, that is not too different from the U.S.," Cochran says. "Same reactors, same sort of safety culture, same concerns about not exposing the population to radiation."

The possibility of things going badly wrong — perhaps especially at coastal plants located along faults in California — is something that will draw more attention than it has in recent years, says Caperton, the energy policy analyst at the Center for American Progress, which has published studies critical of the costs of nuclear power generation.

"The American nuclear renaissance was largely overstated in the first place," he says. "Most utilities don't want to build new nuclear plants; most state regulators don't want them for rate payers; and banks won't finance them."