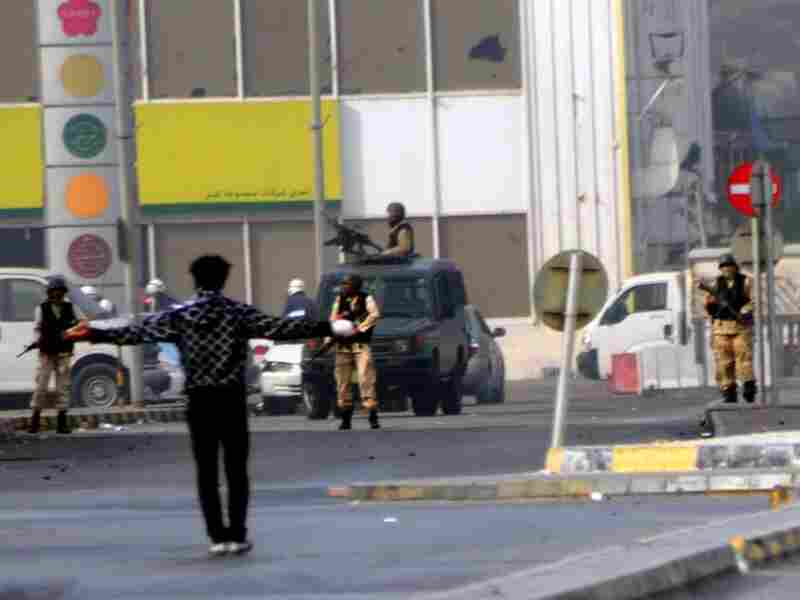 A protester stands open-armed in front of the military in Pearl Square in the Bahraini capital of Manama on Wednesday, after Bahraini police stormed a protest camp, an opposition party official said. James Lawler Duggan/AFP/Getty Images hide caption 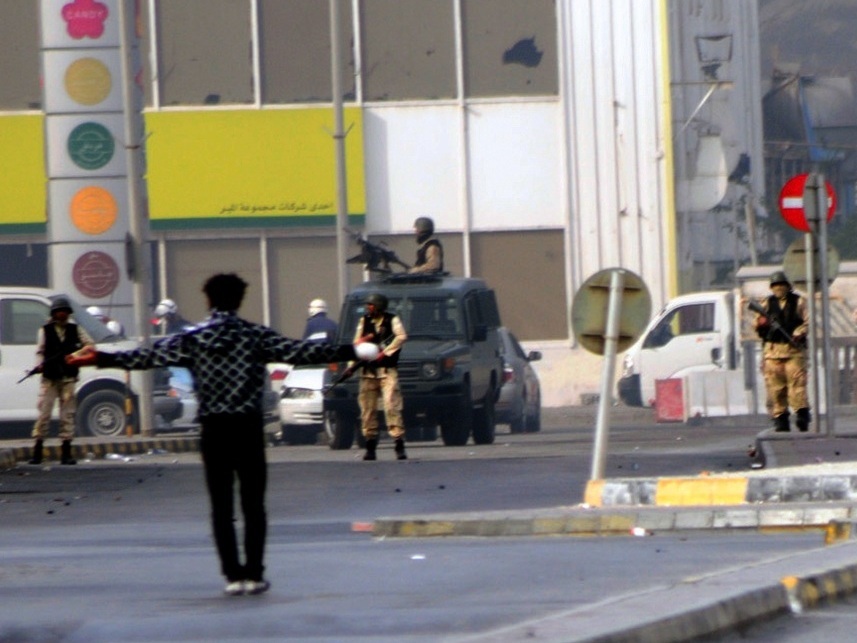 A protester stands open-armed in front of the military in Pearl Square in the Bahraini capital of Manama on Wednesday, after Bahraini police stormed a protest camp, an opposition party official said.

Bahrain's government launched a full-out assault on demonstrators Wednesday, taking over a protesters' camp, imposing a curfew and restricting movement in the island kingdom.

In a symbolic blow, riot police stormed the main square in Bahrain's capital at dawn, driving out hundreds of anti-government protesters and setting the protesters' tents ablaze. At least five people were killed, witnesses and officials said.

"A whole line of armored personnel carriers and even some tanks pulled in here a little after dawn ... and maybe 400-500 police marched down to the traffic circle and confronted protesters," said NPR's Frank Langfitt in Manama, the country's capital.

"The protesters retreated through some of the side streets, and basically the police were going after them," Langfitt said.

Police fired on the crowd with rubber bullets and tear gas, Langfitt said. They swept into Pearl traffic circle, which has been the center of the uprising that began more than a month ago. Stinging clouds of tear gas filled streets, and black smoke rose from the roundabout from protesters' tents that had been set ablaze.

Protesters Fear Mass Arrests Are Next

It was unclear whether the offensive included soldiers from other Gulf nations who were dispatched to help Bahrain's Sunni monarchy, which has been under relentless pressure from the country's majority Shiite Muslims to give up its monopoly on power.

Witnesses said at least two protesters were killed when the traffic circle was stormed. Officials at Ibn Nafees Hospital said a third protester died later. The witnesses spoke on condition of anonymity because of fear of reprisals.

Getting the injured to Salmaniya Medical Complex, Bahrain's largest hospital, became nearly impossible. A doctor there told NPR that police sealed off the facility and kept most patients out.

"One of the police [lifted] up his shotgun into my face and asked me to keep the door open. And I informed him that this is a hospital door and there is air conditioning and it has to be closed and he shouted at me back that 'Keep the door open!' " she said.

She said police claimed they were protecting physicians. But she said she suspects the government wanted to disperse patients across the city to make it harder for foreign journalists to report on casualties.

"It makes me really furious to be kept inside the hospital building and held at gunpoint as hostages," she said.

Bahrain's king on Tuesday declared a three-month state of emergency and instructed the military to battle unrest in the strategic nation, which hosts the U.S. Navy's 5th Fleet.

Also Tuesday, Secretary of State Hillary Clinton expressed alarm over "provocative acts and sectarian violence" and said she telephoned the Saudi foreign minister to stress the need for foreign forces to promote dialogue.

"We believe strongly that you can't solve this problem by just trying to bring security to bear. You have to have a political solution," Clinton told reporters in Cairo, where she was urging on democratic currents that chased Egypt's Hosni Mubarak from power last month.

Wreckage In The Roundabout

State TV broadcast video showing military vehicles in Pearl roundabout flying Bahrain's red-and-white flag as security officials moved through the wreckage of the encampment, set up at the base of a towering monument to the country's history as a pearl diving center. The video showed the ground littered with debris, including satellite dishes and charred tent poles.

Helicopters crisscrossed over the area, which was cleared by security forces late last month but was later retaken by protesters after a deadly confrontation with army units.

During the attack, protesters fled for cover into side streets, and security forces blocked main roads into Manama. Mobile phones were apparently jammed in central Manama during the height of the attack, and Internet service remained at a crawl.

Hamid Zuher, a 32-year-old protester who slept at the square, said riot police first moved in on foot through a haze of tear gas, firing in the air.

"They fired tear gas and then opened fire," Zuher said. "We lifted our arms and started saying, 'Peaceful, Peaceful.' Then we had to ran away. There was so much tear gas and shooting."

The government said security forces came under attack from about 250 "saboteurs" hurling gasoline bombs and responded with tear gas. It denied live ammunition was used.

In Shiite villages, people went to mosques to pray in a sign of protest against the crackdown. Others lit fires in anger. Clashes were reported in other mostly Shiite areas of the country, where traffic was tightly controlled by military forces in an apparent attempt to prevent protest gatherings or a surge of people toward the capital.

In Sitra, resident Rania Ali said police were charging after Shiites even as they ran for shelter.

"I'm scared. I can't move from my house," said Ali, who is a Sunni married to a Shiite man. "I saw them chasing Shiites like they were hunting. ... It is a cleansing war against our Shiite brothers."

Bahrain's sectarian clash is increasingly viewed as an extension of the region's rivalries between the Gulf Arab leaders and Shiite powerhouse Iran. Washington, too, is pulled deeply into Bahrain's conflict because of its key naval base — the Pentagon's main Gulf counterweight to Iran.

Iranian President Mahmoud Ahmadinejad on Wednesday denounced the crackdown and the presence of the Saudi-led force.

"How is it possible to stop waves of humanity with military force?" Ahmadinejad said.

On Tuesday, Iran and its allied force in Lebanon, Hezbollah, denounced the presence of foreign soldiers in Bahrain. Iran has no direct political links with Bahrain's main Shiite groups, but Iranian hard-liners in the past have called the tiny island nation the "14th province" of the Islamic Republic.

Gulf rulers, particularly in Saudi Arabia, fear that the collapse of Bahrain's Sunni monarchy could embolden further revolts across the region and embolden the Saudi Shiite minority whose home region is connected to Bahrain by a causeway.