Accessibility links
After Earthquake And Tsunami, Shock Begins To Turn To Anger In Japan Japan raced to stabilize a damaged nuclear plant amid criticism of a lack of aid and information.

After Earthquake And Tsunami, Shock Begins To Turn To Anger In Japan

After Earthquake And Tsunami, Shock Begins To Turn To Anger In Japan

See The Latest Stories From The Crisis In Japan

Shock among survivors of Japan's earthquake and tsunami turned to anger Wednesday as nearly a half-million people displaced by the disaster and resulting nuclear crisis remained crammed in makeshift evacuation centers, many with few basic necessities and even less information.

The governor of northeastern Fukushima prefecture, the site of a badly damaged nuclear power plant, fumed over what he saw as poor government communication and coordination.

"The anxiety and anger being felt by people in Fukushima have reached a boiling point," Gov. Yuhei Sato told broadcaster NHK. He said shelters do not even have enough hot meals and basic necessities for those living near the plant who have already been relocated.

In a rare address to the nation, Japan's Emperor Akihito called the nuclear crisis "unprecedented in scale" and urged the country to pull together in the aftermath of the earthquake and tsunami.

"Nobody knows how many people will die," the 77-year-old emperor said, "but I fervently hope that we can save as many survivors as possible."

The official death toll from the disaster has reached nearly 3,700, but authorities expect that figure to climb to more than 10,000 because so many are still listed as missing.

A blanket of snow in parts of the devastated northeast added to the misery for millions of people faced a sixth night with little food, water or heat. Police said more than 452,000 people were staying in temporary shelters.

Doualy Xaykaothao, reporting for NPR, visited one such shelter set up in a school gymnasium in Koriyama city, about 40 miles southwest of Fukushima. She said people were still dazed by the tragedy and craving more information from the government.

Men and women at the gym, where about 400 people had taken refuge, huddled in near-freezing temperatures despite a kerosene heater that provided a bit of warmth and made hot water for tea.

In one corner, a 69-year-old grandmother wearing a face mask sat on a small blanket, with bags and a box stacked next to her. She read a newspaper featuring a front page photo of the crippled reactors at Fukushima, one burning and smoking.

The woman said she was alone at the shelter and had been unable to contact family members in the hardest-hit city of Sendai. In tears as she spoke, she said she has long been against nuclear power, especially in a region prone to earthquakes.

One man who arrived at the shelter said he used to work at the Fukushima power plant cleaning up biochemical waste. The man said he had come from Okuma, about 30 miles to the east, and that his house had been destroyed.

"I can't see any future for myself and for my family and for everybody," he told NPR.

But Xaykaothao said a sense of frustration was spreading in the camp, where people had little to do and weren't receiving much information about the crisis.

"People are now starting to get angry," she said. "A couple of days ago, people were still in shock, just trying to figure out what was next for them or how to reach safety.

"Now, they are starting to realize that something's just not right — this could be done faster, the information could be more accurate," Xaykaothao said. "And of course the big question now is what is really happening at this nuclear plant."

Amid the human suffering — unprecedented for Japan since the end of World War II — experts were making their first back-of-the-envelope calculations of the economic costs of the catastrophe.

Some say the cost of the destruction is likely to exceed that of the 1995 Kobe earthquake, which Standard & Poor's estimated to have been $159 billion.

The four most severely affected prefectures — Iwate, Miyagi, Fukushima and Ibaraki — are home to key industries ranging from farming to auto parts to electronics and make up some 6 percent of Japan's economy.

The biggest port on the northeast coast, Sendai, was essentially destroyed by the quake and tsunami. It handled mainly container shipments of exports including rubber and marine products, office machinery, paper goods and auto parts. Three others — Hachinohe, Ishinomaki and Onahama — were severely damaged and will very likely be out of commission for months.

Six oil refineries that can turn 1.4 million barrels of oil a day into fuel — a third of Japan's refining capacity — also have been shut down. Two closures were due to fires, and an out of control blaze at one refinery raged for a sixth day.

"The destruction to ports, power plants and oil refineries in northeast Japan has been extensive," economists Matt Robinson and Ruth Stroppiana at Moody's Analytics wrote in a report. "The cleanup will take months, and the rebuilding of key infrastructure will take substantially longer." 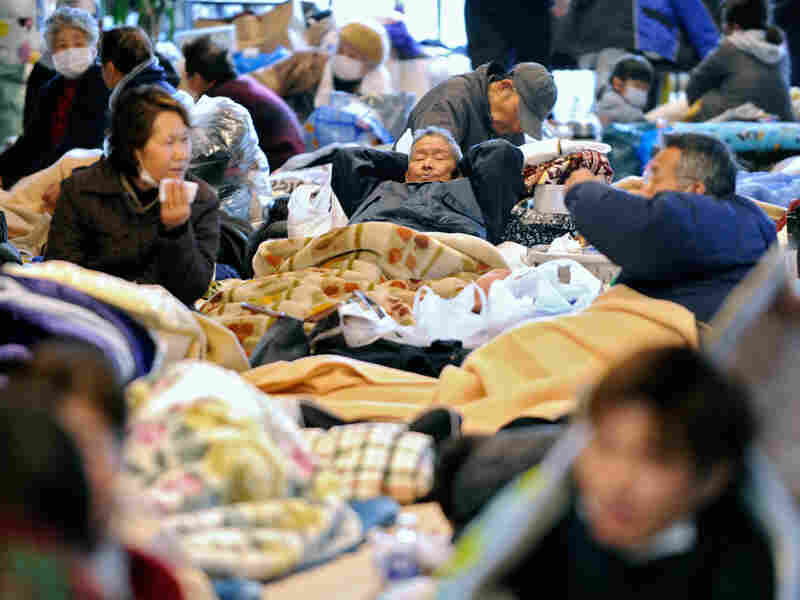 People rest on the floor at a evacuation center after the recent tsunami and earthquake in Natori, Miyagi prefecture, on Wednesday. Toru Yamanaka /AFP/Getty Images hide caption 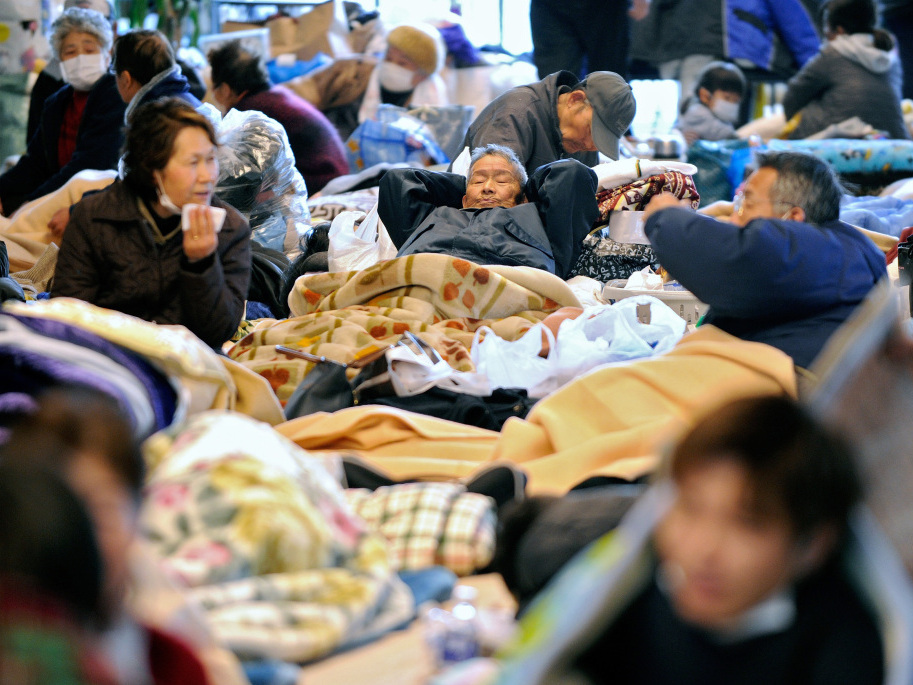 People rest on the floor at a evacuation center after the recent tsunami and earthquake in Natori, Miyagi prefecture, on Wednesday.

President Obama was meeting with USAID Administrator Raj Shah on Wednesday to review U.S. aid efforts for Japan, as well as in Haiti, Afghanistan, Pakistan, the Middle East and Africa.

The review comes as 13 U.S. Navy vessels have been deployed to help provide humanitarian assistance to northern Japan.

Some of the warships have had to change course to avoid radiation over part of the eastern shore of Japan. Other ships en route must navigate through massive debris fields.

Eight ships were already on site and an additional five were moving into position.

Lt. Anthony Falvo, aboard the command ship USS Blue Ridge in the South China Sea, said the American warships in position along the Japanese coast have been able to deliver 25 tons of aid, including food, water and blankets. They've also helped transport Japanese first responders to the disaster sites.

Falvo told NPR that radiation-detection equipment aboard the carrier USS Ronald Reagan found enough radiation Tuesday to raise concerns. So the Reagan and other U.S. ships in the area changed course as a precaution.

"What they've done is move just north, 180 nautical miles away from the Fukushima site, just ensuring that they are not downwind of the radioactive plume," he said.

"These are very, very low levels of contamination," Falvo added. "It's equivalent to one month's natural background of radiation from the sun, so what we're doing is, we're taking every precaution."

Those precautions include making sure Navy personnel are wearing their flight suits with the sleeves rolled down and protective coverings on their boots. Anyone who goes off the ship is tested for radiation before coming back onboard.

Poor flying conditions Wednesday also hampered relief efforts. Pilots on the deck of the Reagan said they were unable to fly because of a lack of visibility. Only 15 flights with humanitarian supplies were launched from the carrier group, according to the Navy.

The U.S. Embassy in Tokyo advised American citizens to evacuate areas within 50 miles of the Fukushima Dai-ichi nuclear plant because of the "deteriorating situation" at the facility.

"We want to underscore that there are numerous factors in the aftermath of the earthquake and tsunami, including weather, wind direction and speed, and the nature of the reactor problem that affect the risk of radioactive contamination within this 50 mile radius or the possibility of lower-level radioactive materials reaching greater distances," the embassy said in a statement.

That radius is more than four times as large as the evacuation zone the Japanese government recommended earlier this week.

Concerns about radiation were at the forefront of several countries' concerns.

France urged its citizens in Tokyo to return to France or head to southern Japan. Officials also called on Air France to mobilize aircraft in Asia to assist with departures.

Australia told its citizens to consider leaving Tokyo and earthquake-affected areas, while the U.K. advised against all nonessential travel to Tokyo and northeastern Japan.

More than 3,000 Chinese in northeast Japan have already been evacuated to western Niigata prefecture, according to Xinhua News Agency. On Tuesday, Beijing became the first government to organize a mass evacuation from the quake-affected area.

With reporting from freelancer Doualy Xaykaothao in Koriyama, NPR's Chris Joyce in Tokyo, Anthony Kuhn in Mizusawa City, and Dan Charles and Rachel Martin in Washington, D.C. Material from The Associated Press was used in this story.