Accessibility links
A Second Run For Stoppard's Duality-Driven 'Arcadia' Tom Stoppard's masterful comic romance plays out in two centuries at once, tripping lightly through subjects as diverse as sex and landscape gardening, academic ambition and the Second Law of Thermodynamics. A much-anticipated Broadway revival opens March 17. 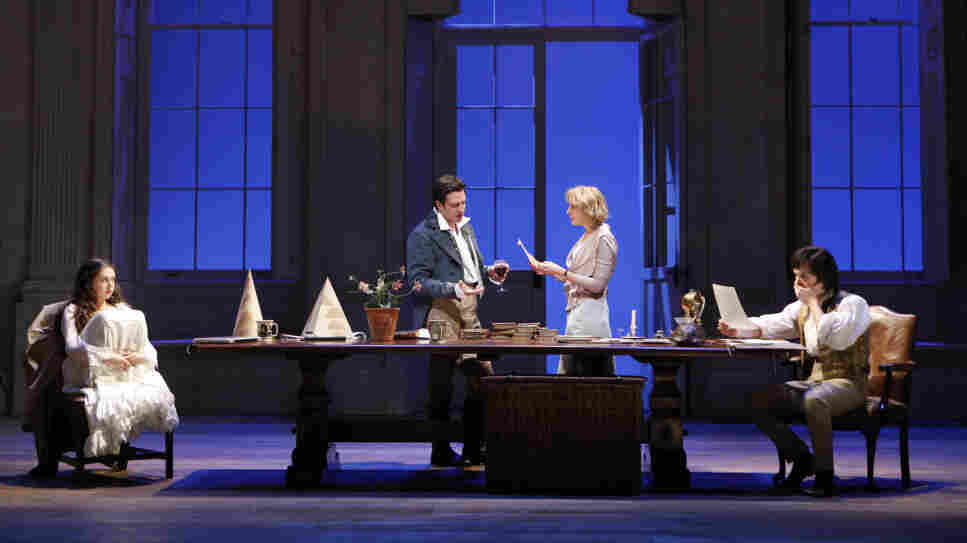 In a career that's encompassed four decades, Tom Stoppard has written many witty, challenging and provocative plays — and the masterpiece among them, many critics feel, is Arcadia, which premiered in London in 1993, came to Broadway in 1995 and opens March 17 in its first New York revival.

But like many of Stoppard's plays, Arcadia isn't easily described: He's somehow managed to take on themes as divergent as chaos theory, academic ambition, the second law of thermodynamics, sex and gardening.

"And then," Stoppard notes, "there's the Byron thing."

Ah, yes, the Byron thing. Arcadia is set in a British manor house, Sidley Park, and its scenes alternate between 1809 and the present, as a pair of academics research what may have transpired when the poet Lord Byron visited.

It's hardly a dry scholarly inquiry, though. In fact, for the contemporary characters, Arcadia is kind of a whodunit: Did Byron kill a minor poet in a duel? Much of the fun for the audience is seeing what actually occurs in the play's chronicle of 1809, versus the sometimes wildly incorrect conclusions the contemporary scholars reach.

Stoppard says he relished the challenge of writing dialogue that would feel right for characters in two different centuries, but that would makes sense in a single play.

"I felt at home writing 19th-century speeches — which are not particularly naturalistic, they're quite mannered — in the style of that period," he says. "It's a very enjoyable idiom for me; especially if one is trying to write people with a certain kind of ironic wit, for example." 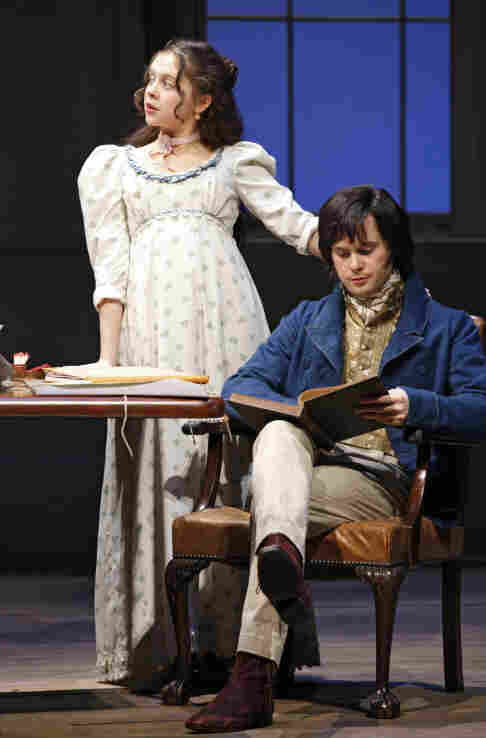 At 13, Thomasina is full of ideas about mathematics (and more) that dazzle even her gifted tutor — and that will challenge him long after the time they spend together. Carol Rosegg hide caption

Consider this exchange between Septimus Hodge, gifted tutor to the precocious young Thomasina, and poet Ezra Chater, whose wife Septimus has seduced; it's rife with sly innuendo and subtle insults:

Chater: You insulted my wife in the gazebo yesterday evening!

Septimus: You are mistaken, sir. I made love to your wife in the gazebo. She asked me to meet her there. I have a note somewhere; I daresay I can find it for you. If someone is putting it about that I did not turn up, then by God, sir, that is a slander!

Stoppard takes "a certain pleasure" in such archaic badinage — and it's "doubled up," he says, "when you're writing that kind of stuff in apposition to a contemporary, slightly foul-mouthed person who might drop the occasional four-letter word and use heavy sarcasm."

"It's a great advantage and a bonus to have, really, two different languages — both of them English — in the same play," he says.

Director David Leveaux explains that there are, in essence, two acting companies required for Arcadia — a separate set of actors to play the characters living in each of the play's eras. But that kind of thinking can create a trap.

"In the rehearsal room, part of the challenge is to make sure that the companies that are in each century aren't kept apart for too long, because they actually are much more mutually dependent than they probably feel they are, at the outset of rehearsal," Leveaux says. "They actually have to take care of each other's information a lot of the time."

That's because in the final scene, both centuries come together briefly, in what's one of Stoppard's most brilliant theatrical moments.

"It is a moment of great discovery," Leveaux says, "for both halves of the company to discover how much they are indebted to one another." 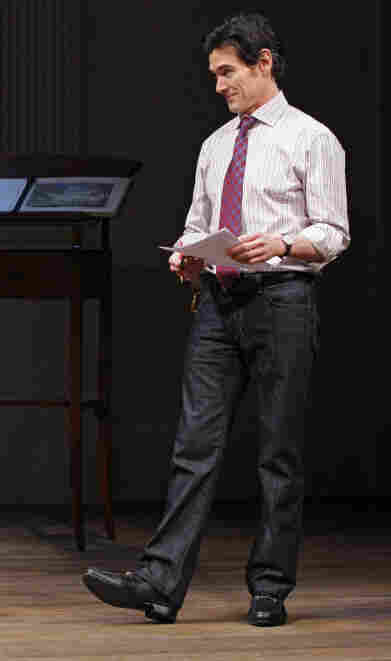 Billy Crudup plays the disdainful scholar Bernard in the current Broadway revival; 16 years ago, he made his Broadway debut as Septimus. Carol Rosegg hide caption

'A Theory Of Everything,' Or At Least Almost

If anyone knows about the dualities of Arcadia, it's actor Billy Crudup. He's playing Bernard, an abrasive modern-day Byron scholar, in the current revival. Sixteen years ago, he made his Broadway debut in the original New York production as Septimus, the tutor who's Byron's friend. Playing two different characters from two different centuries in two different decades has been a fascinating experience for him as an actor.

"Septimus is so assured; he's the conduit for the audience to the play," Crudup says. "There's an immediate affection and appreciation for him. [He gives you] access to this fascinating but ornate world. Bernard, on the other hand, behaves wildly inappropriately and disdainfully, and is a kind of an eccentric that you don't have easy access to."

If Bernard is less than lovable, he's at least a passionate defender of poetry, especially when others would rank it below science on a scale of important things. He gives a fiery speech in the second act — a "thrilling and mischievous assault on the arrogance of science," as Leveaux describes it, and one the director thinks contains at least a grain of truth:

Bernard: A great poet is always timely. A great philosopher is an urgent need. There's no rush for Isaac Newton. We were quite happy with Aristotle's cosmos; 55 crystal spheres geared to God's crankshaft is my idea of a satisfying universe. I can't think of anything more trivial than the speed of light. Quarks, quasars, big bang, black hole – who gives a sh--?

Bottom line, though, all of the characters in both of Arcadia's centuries are passionate about the pursuit of knowledge. One of Leveaux's favorite lines is spoken by Hannah, a contemporary character who's researching the history of Sidley Park's garden: "It's the wanting to know that makes us matter."

In that phrase, Leveaux says, "is a glorious and open-hearted encapsulation of something very beautiful about the human desire to know. ... And that transcends even the particular detail of the subjects involved."

And as Arcadia also makes clear, that desire to know stands in aching contrast to the impossibility of knowing everything, much less understanding how it all fits together. Valentine Coverly, a present-day character who pores over some of Thomasina's 19th-century writings at Sidley Park, says it in one of the play's great passages:

"To be at the beginning again, knowing almost nothing!" he marvels. "People were talking about the end of physics; relativity and quantum [physics] looked as if they were going to clean out the whole problem between them. A theory of everything! But they only explain the very big and the very small; the universe, the elementary particles. The ordinary side stuff, which is our lives — the things people write poetry about — clouds, daffodils, waterfalls, and what happens in a cup of coffee when the cream goes in. These things are full of mystery."