Accessibility links
DEA: Georgia May Have Broken Law By Importing Lethal Injection Drug Georgia has put executions on hold, after the Drug Enforcement Administration seized the state's supply of sodium thiopental, one of three drugs used in lethal injection. The government has questions about whether the drug was imported illegally from Britain.

Listen
Georgia May Have Broken Law By Importing Drug 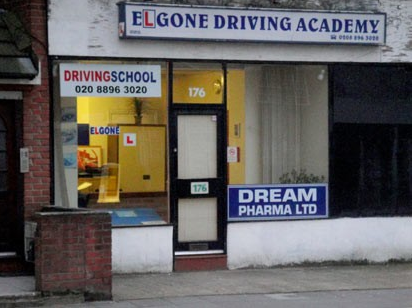 Records show the Georgia Department of Corrections bought sodium thiopental from Dream Pharma, a distributor operating out of the back of a driving school in London. The DEA seized the state's supply of the drug this week. Julian Knowles hide caption

There can be no more executions in Georgia for now after the Drug Enforcement Administration seized the state's supply of sodium thiopental, one of three drugs used in lethal injection. The government has questions about whether the drug was imported illegally from Britain.

Several other states may also have to answer questions about how they obtained their supplies.

There's been a lot of secrecy surrounding how states have been getting sodium thiopental since a U.S. company stopped making the sedative in 2009.

Records show Georgia bought the drug from an English distributor, Dream Pharma. In court, the Georgia Department of Corrections said it was not worried about the quality of its supply. But defense attorneys got records that showed the state may have violated federal law in obtaining the drug.

"Georgia has engaged in a pattern of illegality and shady misconduct to get drugs to execute people," says William Montross, an attorney with the Southern Center for Human Rights in Atlanta.

Montross says that Georgia bought sodium thiopental from a secondary distributor, a company that operated out of the back of a London driving school. He says that many defense attorneys condemned the practice, and question the quality of the drugs.

"This stuff was going on for months and months beforehand," Montross says, "and it was in court, and federal and state judges had an opportunity to do something — and no one did anything. They just turned a blind eye. And then finally, DEA steps in."

Since the shortage of sodium thiopental began, some suggested the Food and Drug Administration should inspect the quality of the drugs being imported. But the agency declined to get involved.

The DEA has not said whether it will seize supplies of sodium thiopental in other states. But some who are following the issue say the agency should.

"You know, we've already seen the shortage has delayed executions in a number of states — Arizona, Arkansas, California, Georgia and Tennessee — and all those states have had to go to England for their supply of the drug," says Fordham Law School professor Deborah Denno. "So it bears investigating whether those states have been engaging in the same kind of activity as Georgia has been."

But defense attorneys cite another problem. They say Georgia officials sold some of their supply of sodium thiopental to Kentucky officials. That raises more questions about where the drugs might end up.

"Once the drug enters the country, there's a real risk of diversion," says Megan McCracken, who is with the death penalty clinic at the University of California, Berkley.

"There's no guarantee that the drug will remain within this closed system of capital punishment," McCracken says. "In the past month, we've learned that the state of Kentucky purchased sodium thiopental from a private company in Georgia. And so if a private company is selling it, we now have sort of realization of this risk, of the drug entering the stream of commerce."

An open records request in Kentucky revealed that the state purchased sodium thiopental from CorrectHealth, a Georgia company that provides all medical services for the Georgia Department of Corrections. The head of that company denied selling the drug.

As questions remain over the supply of sodium thiopental, states are seeking alternatives. Texas officials just announced they will join two others states, Ohio and Oklahoma, and switch to using the sedative pentobarbital. Texas plans to use the new drug in an execution scheduled for next month.