Accessibility links
Army Clarifies Purple Heart Rules For Soldiers The new guidelines should make it easier for soldiers with traumatic brain injuries from explosions to receive the Purple Heart. The Army's move comes in response to an investigation published last September by NPR and ProPublica that revealed some soldiers had been wrongly denied the medal.

Acknowledging that commanders have sometimes wrongly denied the Purple Heart to soldiers who suffered battlefield concussions, the Army plans to issue new guidance to clarify when such recognition is warranted, Army officials said Wednesday.

Purple Hearts were initially awarded to recognized meritorious service, but during World War II, the medal was changed into a recognition of combat injuries and deaths. patries71/flickr hide caption

In addition, the Army is planning to prioritize appeals from brain-injured soldiers who feel they should not have been turned down for the medal, a hallowed military honor that recognizes those injured in combat.

Gen. Peter Chiarelli, the Army's second in command, said he reviewed the Army's policies on the Purple Heart and called for the new guidelines as a result of an investigation by NPR and ProPublica. In a report published last September, we found that Army commanders denied Purple Hearts to some soldiers who sustained concussions, despite regulations that make those who suffer such wounds eligible for the medal.

Though the new guidelines do not change the rules concerning eligibility for the Purple Heart, a modern version of an award originally created by George Washington, they add a clarity that should make it easier for soldiers to prove they deserve recognition.

To receive the Purple Heart, the Army's current regulations require that a soldier be injured by enemy action and receive documented treatment from a medical officer. The Army's official list of wounds that "clearly justify" the award includes, "Concussion injuries caused as a result of enemy generated explosions."

The NPR and ProPublica report, however, found that some senior officers and medical officials did not consider concussions serious enough to merit the award. Concussions, also called mild traumatic brain injuries, typically do not leave visible damage. While most people recover from them within days or weeks, civilian studies suggest that about 5 percent to 15 percent of victims may suffer lingering cognitive problems.

A History Of The Purple Heart Sept. 8, 2010
Brain Wars: How The Military Is Failing Its Wounded Sept. 3, 2012
Brain Wars Coverage From ProPublica

The report showed that a senior medical officer in Iraq, Brig. Gen. Joseph Caravalho, issued a 2008 memo that discouraged awarding the Purple Heart in cases in which soldiers required only "minimum medical intervention." Other senior medical officials had turned down soldiers for the medal out of concerns that giving it for concussions lessened its value when compared to soldiers who had suffered other types of injuries.

The new guidelines, which will be distributed throughout the Army, provide a checklist that makes clear that concussions requiring any sort of treatment by a medical professional—including bed rest or over-the-counter headache medication—is sufficient to meet award criteria.

The guidelines also clarify that soldiers diagnosed and treated by any medical professional, including nurses and physician's assistants, are eligible, as long as their standards of care match those a military doctor would apply.

Chiarelli said the checklist was part of an ongoing effort to ensure that soldiers, commanders and medical officers take so-called "invisible wounds" seriously. Recognizing soldiers who have suffered concussions drives home the Army's commitment to improving care and treatment, he said.

"It is very important if we're going to get at this stigma issue," Chiarelli said. The Purple Heart "shows to everyone that these hidden injuries are truly injuries that affect folks."

After the ProPublica and NPR reports, Chiarelli ordered officials at the Army's Human Resources Command to review whether Purple Hearts had been erroneously denied.

Col. Tom Quinn, the Army's director of soldier programs and services, initially reviewed nine applications from soldiers that had suffered a mild traumatic brain injury. Three soldiers had received the award. Six others had been denied or were still awaiting an answer because commanders disagreed on their cases. Four of the six clearly merited Purple Hearts, the review determined.

The results prompted Chiarelli to order a more-in-depth review this fall, a task made more difficult because the Army does not centralize the award of Purple Hearts, which are often handed out in the field.

Reviewers looked over more than 6,000 paper records, including applications for awards other than Purple Hearts. They found about 100 applications for Purple Heart concerning soldiers with concussion injuries. Some appeared to have been wrongly denied, Quinn said, but he did not have statistics.

"We determined that the guidance is not very clear out in the field and it's not being uniformly applied across the force," Quinn said. "We think some deserving soldiers may not have been appropriately recognized."

Army officials decided the most equitable way to rectify erroneous denials was to ask all soldiers who applied for Purple Hearts for concussions to re-apply.

Quinn promised the Army would move "aggressively and impartially" to resolve the requests as quickly as possible. "We don't want to miss anybody. We want to give everybody the same opportunity." Quinn said.

The new guidelines will apply only to the Army. Other military branches are reviewing their criteria, however, according to the Military Times. Currently, the Marine Corps recognizes soldiers with the medal only if they were knocked unconscious, even though the medical definition of concussion encompasses blows that leave patients dazed or confused, but conscious.

Rep. Bill Pascrell (D-N.J.), has asked the military to apply a uniform standard for awarding the Purple Heart.

Soldiers and their advocates welcomed the Army's new guidelines. The Purple Heart brings few medical or financial benefits, but is a tangible symbol of having fought and suffered for one's country. It is also the only military award that is considered an entitlement—an honor earned through individual sacrifice, rather than awarded by a superior officer. 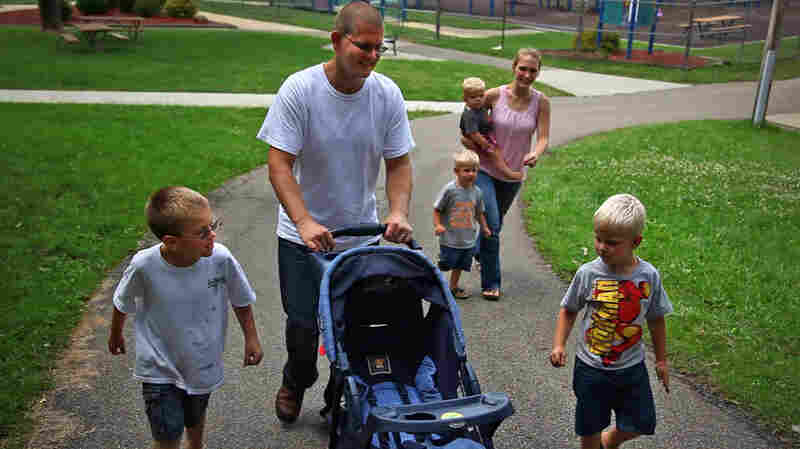 Sgt. Nathan Scheller was twice denied for a Purple Heart, though roadside bomb explosions left him with lasting cognitive damage. Above, Scheller walks with his wife, Miriam, and his family. NPR/Frontline hide caption 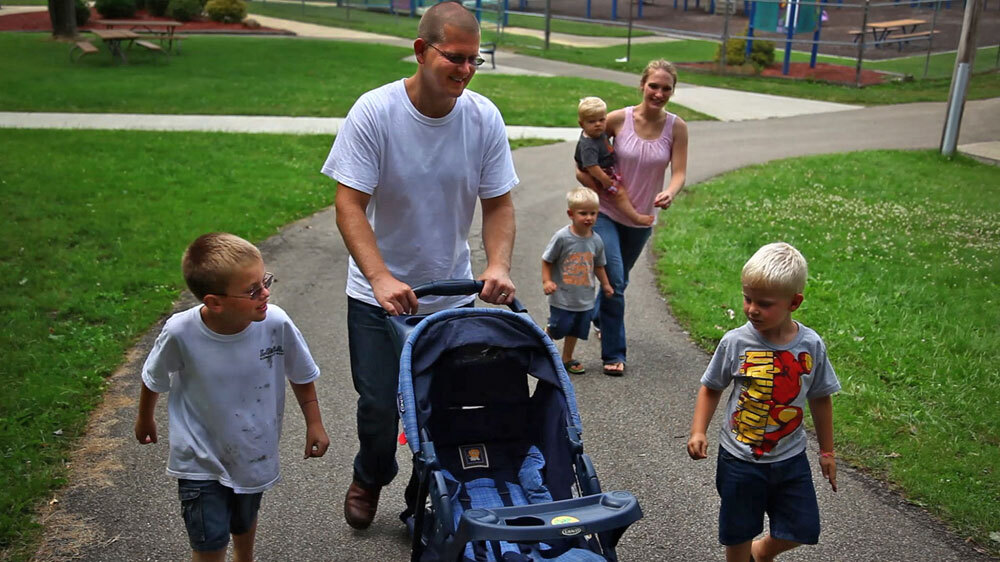 Sgt. Nathan Scheller was twice denied for a Purple Heart, though roadside bomb explosions left him with lasting cognitive damage. Above, Scheller walks with his wife, Miriam, and his family.

"It's encouraging that soldiers will finally get the awards they deserve and that their injuries will be acknowledged," said Jayna Moceri Brooks, an Army wife and nurse who helped found Recognize the Sacrifice, an organization which helps soldiers with concussions apply for Purple Hearts. "It's very encouraging."

Nathan Scheller, a retired sergeant, has battled for years to receive a Purple Heart for concussions that he received in Iraq. He expressed cautious optimism that the new guidelines would help.