Accessibility links
New Republic: In Bachmann, A Serious Contender As the competition starts to heat up in the GOP over who will declare candidacy for president in the 2012 elections, Ed Kilgore of The New Republic argues that Rep. Michele Bachmann (R-MN) could actually be a have a legitimate shot in the election — especially when you stand her next to Palin. 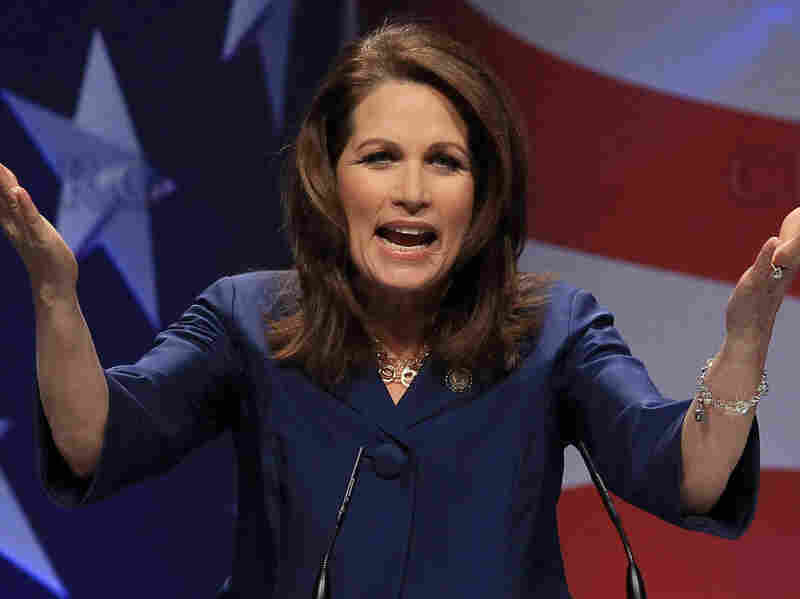 Rep. Michele Bachmann (R-MN) speaks at CPAC in February in Washington, D.C. Although no GOP candidates for the 2012 presidential election have been announced, Bachmann is among the names of those who may be weighing a decision to run. Mark Wilson/Getty Images hide caption 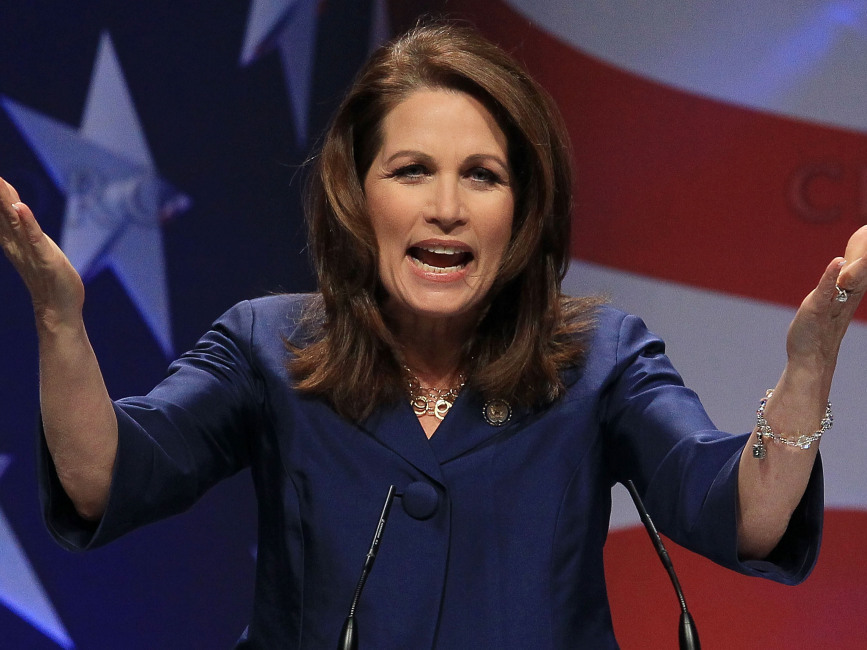 Rep. Michele Bachmann (R-MN) speaks at CPAC in February in Washington, D.C. Although no GOP candidates for the 2012 presidential election have been announced, Bachmann is among the names of those who may be weighing a decision to run.

As the 2012 Republican presidential field finally takes shape over the next few months, one thing is fairly certain: An intensely ideological female politician closely identified with the Christian Right and with the Tea Party movement, someone liberals love to hate, will define the race. But surprisingly, it's increasingly likely that person will be Michele Bachmann rather than Sarah Palin. The former Alaska governor has been deliberately opaque about her plans, but she looks ever less interested in running for president — and even if she is quietly hankering for a White House bid, her approval ratings have been sliding steadily among Republicans as well as the public at large (worse, a vast majority of Americans think she is unqualified to be president). That leaves an opening for Congresswoman Bachmann, the Tea Party firebrand from Minnesota, who is almost an improved version of Sarah Palin: even more right-wing, which appeals to the base, but also lacking many of Palin's fatal political flaws.

The parallels between Bachmann and Palin are hard to ignore, up to and including their backgrounds as minor beauty pageant contestants. Both women are politically rooted in the anti-abortion movement, having earned the loyalty of anti-choicers by "walking the walk" — Palin by carrying to term a child with a severe disability, and Bachmann by serving as a foster parent to 23 children (in addition to her own five), plus walking a few abortion clinic picket lines over the years. Both candidates are heroes of the Tea Party movement (Bachmann is the founder of the House Tea Party Caucus). And both have regularly played fast and loose with facts and history, constantly treading the boundary between ideologically loaded viewpoint and sheer ignorance.

But when you put Palin and Bachmann side by side, it is striking how much broader and deeper — in a word, more seriously committed — the Minnesotan's involvement with right-wing causes has actually been. Her signature issue as a Minnesota state senator was fighting same-sex marriage, while Palin made her name as a maverick who fought corruption. Bachmann is the one who organized the borderline-violent demonstrations at the U.S. Capitol just before last year's final vote on health reform, and suggested that Democratic members of Congress be investigated to determine if they were "pro-American" or "anti-American." And Bachmann isn't a casual churchgoer like Palin: She got her law degree from Oral Roberts University (a law school that eventually migrated to Pat Robertson's Regent University); her husband has long run a "Christian family counseling" center; and both Bachmanns once operated a charter school that was accused of seriously violation of the principle of church-state separation.

Moreover, Bachmann doesn't give the impression her public persona is just an ego-gratifying act. She hasn't starred in a reality TV show (or sent her daughter to dance with the stars), appeared on Saturday Night Live, or quit her job. And she is relatively free of Palin's whiny martyr complex, which conservatives have begun to criticize quite loudly. For all her defiance of the "lamestream media" and the hated "elites," Palin concedes the power of her critics' sneers by being so conspicuously wounded by them. Bachmann seems tougher, as reflected in her handling of a recent gaffe in which she said that the battles of Lexington and Concord happened in New Hampshire. Bachmann responded to the mockery with a barbed admission: "So I misplaced the battles Concord and Lexington by saying they were in New Hampshire. It was my mistake, Massachusetts is where they happened. New Hampshire is where they are still proud of it!" Likewise, she refused to wallow in the media backlash over her poorly received State of the Union rebuttal, in which a camera placement error caused her to stare off-screen like a zombie. Instead of making her critics the story, as Palin so often does, Bachmann just moved on.

Moreover, Bachmann is in excellent political position. She could certainly do well in the first-in-the-nation Iowa Caucus, particularly if Mike Huckabee also stays on the sidelines as expected, creating a hunger for a new Christian Right champion in a state where the Christian Right still walks tall. It also helps that she is actually an Iowa native living in next door Minnesota — and it's hugely important that her very closest associate in Congress is influential Iowa Congressman Steve King. As Craig Robinson, an Iowa GOP insider, says about the Bachmann-King combo:

A Bachmann run would create a perfect storm in Iowa. Bachmann is already the darling of the Tea Party. Combine that with King's statewide network of conservative in a caucus election and its bound to befuddle everyone in the beltway as well as her caucus opponents.

Even if Bachmann doesn't win a state outright, she could wreak havoc on the field. Given her fanaticism about root-and-branch repeal of ObamaCare, is there any doubt she would make sure every Caucus-goer knows about RomneyCare? Plus, she represents a deadly threat to the ambitions of her fellow Minnesota Republican, Tim Pawlenty, who has been quietly consolidating a position as likely Republican frontrunner: When she was a state legislator, Bachmann once assaulted a Pawlenty proposal for an enterprise zone, saying it represented Marxist principles. She won't need an oppo research firm to dig up other alleged Pawlenty violations of conservative dogma. And it's unlikely Pawlenty could survive running behind a fellow Minnesotan in a state so close to his own.

That said, it's doubtful Bachmann would wear very well on primary voters in later states, and it's hard to imagine someone as radical as her actually winning the nomination. Some observers think she will eventually back off and perhaps run for the Senate instead. But I wouldn't be so sure. Bachmann need look no further than Palin's example to see that making a big splash in a national election can secure success more quickly than crawling up the career ladder in Washington. And also like her doppelganger, Bachmann has never been shy about her ambitions — or the conviction that her career is being guided by none other than the Lord himself. Why wouldn't she take a leap of faith?