Accessibility links
'New York Times' Unveils Metered Online Pay Wall Executives believe they have found the right formula and the right moment to do the seemingly impossible: get people to pay for online news. The Times is introducing a metered system under which the paper's most loyal readers will pay for access to the website, while casual users won't pay a cent. 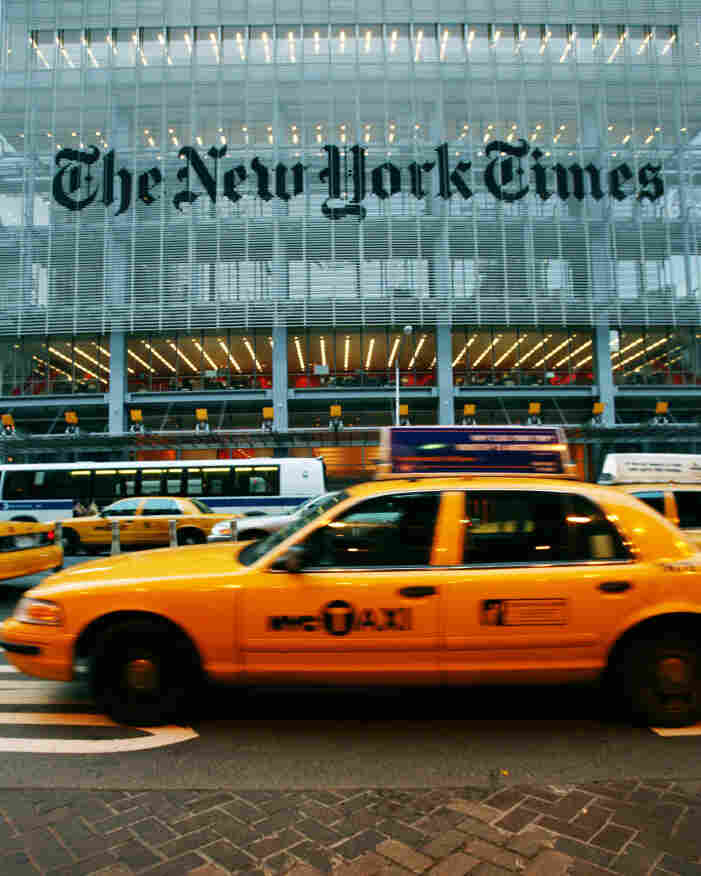 The New York Times announced Thursday that the paper would embrace a metered approach to an online pay wall. As of March 28, online users will be able to view up to 20 pages per month. Beyond 20 page views, readers will have to pay $15 monthly for Web access. Mark Lennihan/AP hide caption 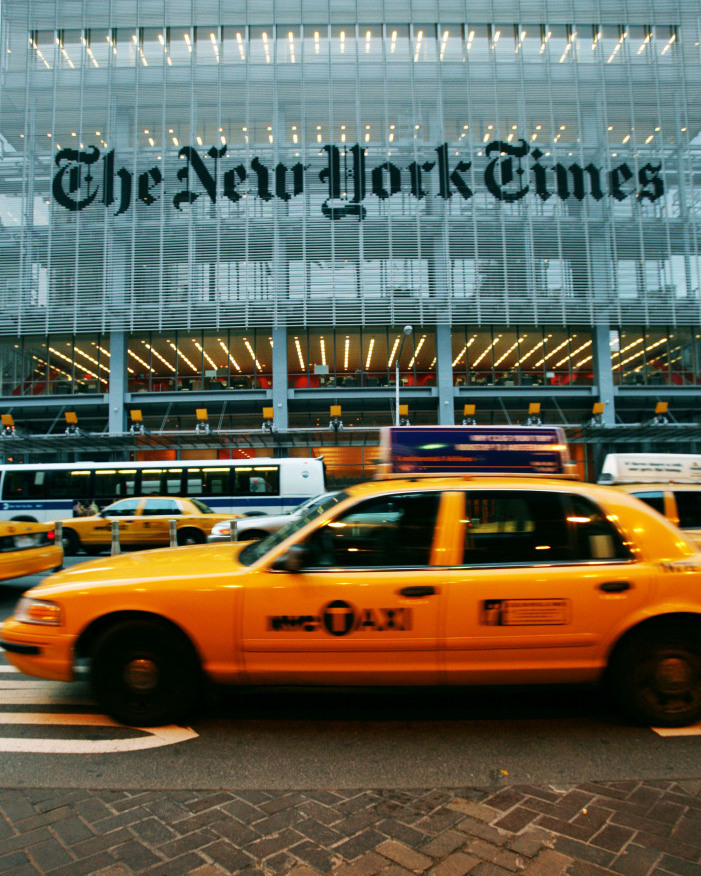 The New York Times announced Thursday that the paper would embrace a metered approach to an online pay wall. As of March 28, online users will be able to view up to 20 pages per month. Beyond 20 page views, readers will have to pay $15 monthly for Web access.

Thursday morning, executives at The New York Times announced they believe they have found the right formula and the right moment to do the seemingly impossible: get people to pay for online news.

The Times is unveiling a metered system under which the paper's most loyal readers would pay for access to the website, though most casual online readers would not pay a cent. Print subscribers would also continue to receive unfettered access at no additional cost.

Executives say the time is right, as people have been conditioned by tablets and smart phones to pay for access to content.

The Times has embraced what's called a metered approach — readers can click on as many as 20 different articles, slideshows, or videos a month without paying a cent. A page click through a Google search or a friend's referral via Facebook or Twitter won't count against you.

But as of March 28, the paper will charge digital readers who view more than 20 pages per month $15 each month for Web access and an iPhone application; $20 for access on the Web, iPad and other tablets; or $35 for access on all three platforms. The model does not yet incorporate e-readers such as the Kindle, for which the Times has ongoing subscription plans.

Depending on their plan and location, subscribers can pay up to $769 annually for the print edition. Newspaper executives have longed for years to convert their online readers into paying subscribers as well. But it has been a tortuous path.

The New York Times has twice experimented with making some readers pay for online content, and twice it has backed away. Initially, at the launch of the website, readers abroad were required to pay; that did not last long. In 2005, the paper introduced TimesSelect, which put its influential opinion columnists behind a pay wall.

While Robinson termed that venture a financial success, it was scrapped as well two years later. Columnists reportedly bristled at the idea their pieces would circulate to a diminished audience.

In this case, the Times was inspired by the more stringent metered model of the Financial Times, which allows people to read up to five articles a month free.

Publisher and board Chairman Arthur Sulzberger Jr., said the Times has found a way to help pay for the paper's robust coverage without markedly curtailing its reach. "We did not — any of us — feel that putting up an iron gate, if you will, that cut us out of the digital ecosystem, made any sense at all," Sulzberger told NPR. "So this is about balance."

Conventional wisdom says readers tend to pay only for content that aids their business interests — such as the financial press — or that satisfies a strong passion — like sports.

Last year, The Times of London and its sister paper, the Sunday Times of London, last year put an ironclad pay wall around their digital content. People could not read articles unless they had paid for the access or were print subscribers too. The online audience for the two papers plummeted from 20 million monthly unique online readers to a little more than 100,000. There were only approximately 54,000 paying monthly digital subscribers. The Times of London called it a success in its early stages, but outsiders question that logic.

But The New York Times is, in effect, making a bet that its rich online report will be similarly indispensable. And it has enhanced its regional coverage with partnerships with several new not-for-profit news outlets, in California's Bay Area, in Chicago and in Texas. The hope at the Times is to continue building the readership for whom the newspaper and its website is the the first news source of choice rather than a supplement to the local big paper.

Emily Bell was the director of digital content for the rival Guardian in the U.K. — and is now the director for the Tow Center for Digital Journalism at Columbia. She estimates the overwhelming majority of visitor readers to The New York Times website will still have free access — all but about 5 percent.

"They're very sensible not to put the wall across the front of the house," Bell said. "The New York Times is trying harder to make sure it's still part of the Web."

But Bell argues that the Times squandered money and energy better spent creating other revenue streams instead. "That is the real tragedy of it — that it's become a dominant strategy for people to examine and pursue," Bell said. "It's too expensive and it returns too little and it actually hastens decline."

Some analysts, however, say the timing is just right. News analyst Ken Doctor of Outsell recently wrote of what he called the virtuous cycle created by charging your most loyal online readers — who are presumably those invested enough in your news outlet to pay.

"Here is the growing epiphany about these core readers: Not only do they pay you; they use lots more pages than the fly-by people, the non-core sent by Google, Facebook, Twitter and all manner of other referrals," Doctor wrote. "Not only do you get more usage from this paying core group, but those readers also become better and better advertising targets each day."

Indeed, Sulzberger says he took inspiration from the passion stirred by public radio stations. He notes they draw voluntary contributions from dedicated listeners, even though their programs are provided on the air free.

The New York Times is not utterly alone in this strategy. Several smaller papers with little competition have digital pay walls. The Dallas Morning News started its own version this year, though the paper's publisher and CEO, Jim Moroney, shies away from the term because readers might find it's off-putting. That said, he doesn't promise his formula will work.

"I don't think there's any certainty around what we've done," Moroney said. "There is no major metropolitan newspaper that's gone about this the way we have."

But he said that as online content through social media and other outlets continues to expand, news organizations will have little choice but to find other revenue streams.

"If you're trying to make your business on the back of advertising, which the printed newspaper did for many, many years, the math just doesn't work in your favor," Moroney said. "If you're still pursuing an online business strategy aimed at building impressions ... you're not going to make enough money."

The Times' metered system is set to take effect Thursday morning in Canada — as a dress rehearsal for American users.