Accessibility links
Airborne Radiation Poses Minuscule Risk For U.S. Any radiation released in a plume from the stricken Fukushima Dai-ichi nuclear power plant in Japan would be diluted before it reached the West Coast of the U.S., a radiation expert says. Taking lessons from the Chernobyl disaster, scientists can approximate how radiation will travel in the atmosphere. 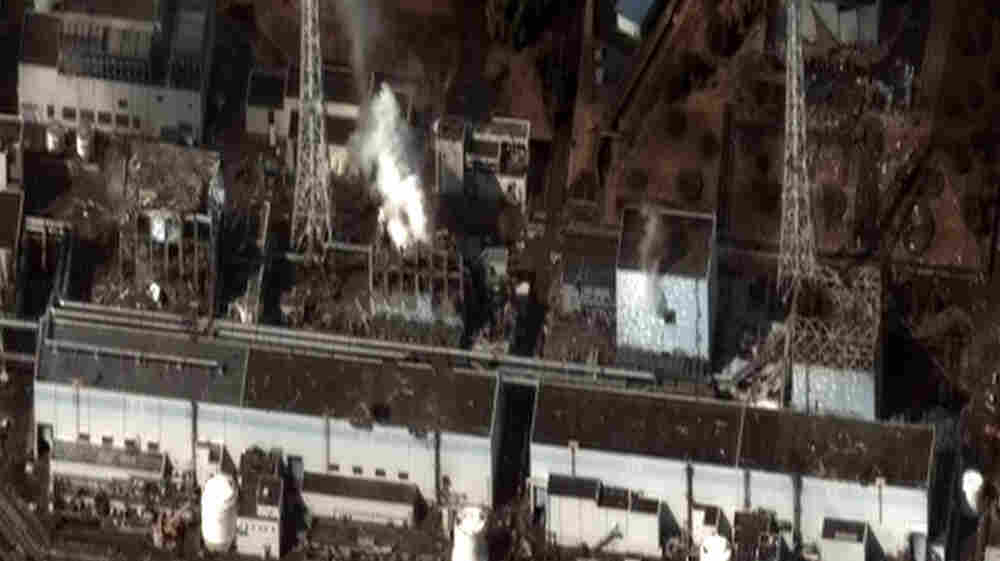 A white cloud rises from reactors at the stricken Fukushima Dai-ichi nuclear power plant on Wednesday. Though the gas contains radiation, experts say any plume that travels out over the ocean won't be of much risk to the West Coast of the U.S. DigitalGlobe hide caption

Plumes of white smoke have been rising for several days now from Japan's damaged Fukushima Dai-ichi nuclear power plant. The fact that those plumes contain radioactive particles has stirred up a good bit of anxiety and even fear — not only inside Japan but far and wide.

So the radioactive cloud will bring another source of exposure, but judging from the Chernobyl experience, the West Coast of the United States is so far from Japan that levels should be very small.

But what exactly is in those plumes, and do they pose a risk?

"For now, I would say that there is very little risk," says Andre Bouville, who recently retired as head of the Radiation Dosimetry Unit at the National Cancer Institute. "Those plumes resemble those that were emitted during the Three Mile Island accident and really didn't cause any significant risk to the population."

Officials in Japan have reported that radiation levels in and around the plant are higher than normal, but Bouville says these measurements probably are a reflection of radiation leaks from elsewhere at the facility, not from the clouds of gas.

"My interpretation is that the radiation readings are due to external irradiation — they come from inside the plant itself, but they are not due to the radioactive cloud," he says.

Many experts don't expect the Japanese nuclear disaster to approach anything like the effects seen from Chernobyl, but Bouville says scientists did learn about how radiation can behave in the environment after an accident.

Bouville says that as a potential cloud passes over the ocean, it would become very diluted, which would help reduce risk.

Radiation at any level can cause cancer, he says, "but the probability is very, very small."

"You know, we live in a sea of radiation — there is natural radiation due to uranium and thorium in the ground or from cosmic rays coming from the sky," Bouville says. "We are also subject to medical radiation. So the radioactive cloud will bring another source of exposure, but judging from the Chernobyl experience, the West Coast of the United States is so far from Japan that levels should be very small."