Accessibility links
Why I'm Here My mom has a magnetic force around her. Rootless things fly through the air toward her and land at her feet. Five husbands did, one right after the other. She was 15 years old when Number One appeared. 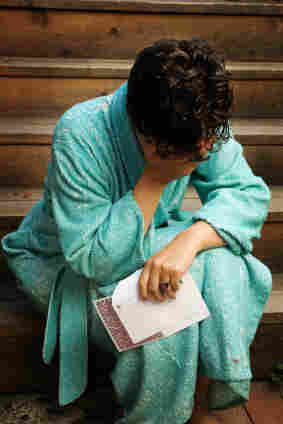 My mom has a magnetic force around her. Rootless things fly through the air toward her and land at her feet. Five husbands did, one right after the other. She was 15 years old when Number One appeared. There's only one photo of her from back then. She's got one foot up on the running board of an old pickup truck. She's got a hand up like she's trying to shield her eyes. She looks like she's seeing something off in the distance, something that's better than anything within reach.

The day she met Arnie, Number One, was one of those days when you swear you can reach out and grab a handful of air, all hot and thick and going nowhere. Arnie's car broke down on the road that ran alongside the trailer park, just as Ma and her mom were coming back from the store, each carrying a bag of groceries. Arnie stood frowning into his engine, looked up as the women passed and asked the distance to the nearest gas station or garage. According to Ma, he got as far as "Hey ladies, can you tell me how far it is?" and Ma, full of too much humidity and boredom, shot back, "Too far for those fancy shoes to carry you."

Ma watched him pull his head back and start laughing. The car got fixed, and the next thing my grandma knew was that her daughter seemed to be always getting into that car or getting out of it. Finally, my grandma signed the papers and Ma and Arnie were married. In four months, Arnie was in the Merchant Marines, halfway around the world. Ma carried all his letters in her bathrobe. She cried that she couldn't hold onto the calls like she could the letters. After about a year, her bathrobe pockets went back to just lint and tissues, and in no time at all, the divorce was finalized.

Number Two was Claude, who became the father of Ma's first child. The others followed so fast it was like they were all lined up inside her, waiting. I belong to Number Three, although by the time I was born, Number Three was long gone. Numbers Four and Five added a few more towns and houses of their own. After a while, I lost count of all the places we lived.

Ma left Number Five when my grandma died, came back to Cockeysville, sold the trailer and bought a pickup truck. By then, I was the last one at home. We started out for Michigan, got as far as South Bend, Indiana and stayed long enough for me to get a job at the phone company. Ma met Mel, and for the first time ever, she said she'd live with a man but not get married.

It's a lot of years later and I've never left South Bend. Don't ask me if I like living here; it's not a question I've ever asked myself. It's just where I am. I've been married for 15 years to the same man, and we've always lived in the same house. I don't want to ever think about moving. I told my husband I chose him because he was born in South Bend. And because he's a locksmith. His job is to make locks for houses where people want to stay put. Or he helps people who have been locked out of their house so they can get back in. I have about 20 extra keys to my house. I always want to be able to get back in.