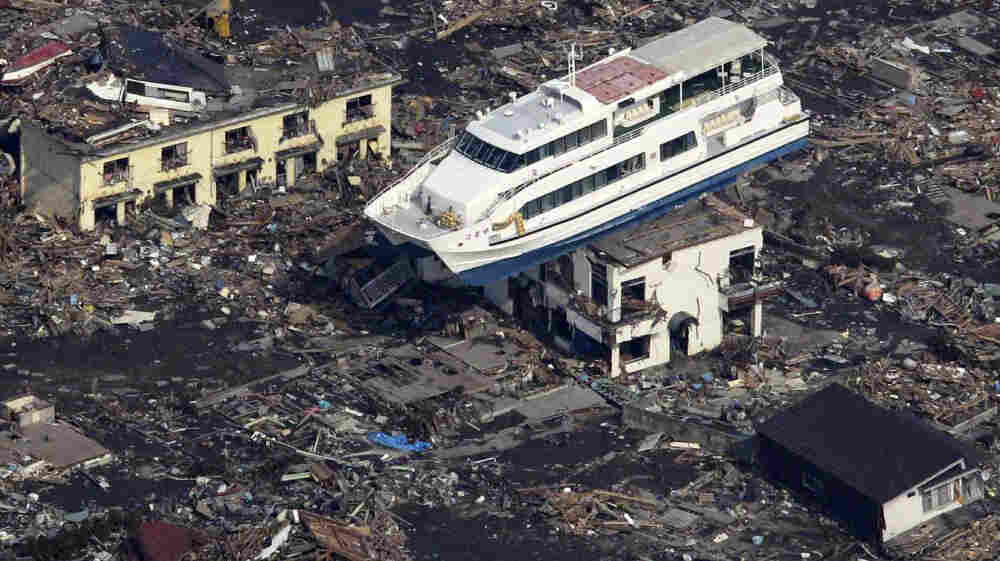 This aerial shot shows a pleasure boat sitting on top of a building amid a sea of debris in Otsuchi town in Iwate prefecture on March 14, following the March 11 tsunami. Yomiuri Shimbun/AFP/Getty Images hide caption 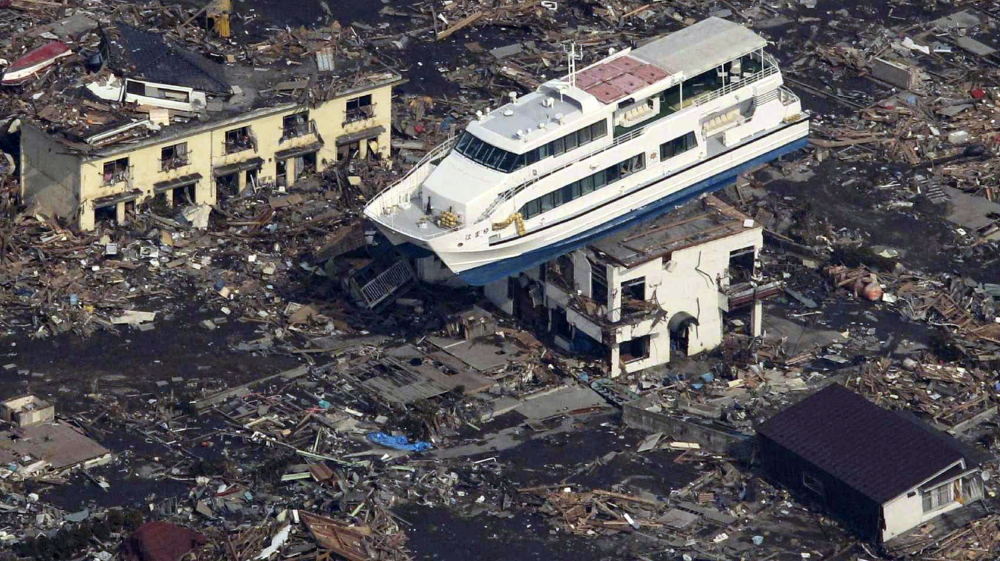 This aerial shot shows a pleasure boat sitting on top of a building amid a sea of debris in Otsuchi town in Iwate prefecture on March 14, following the March 11 tsunami.

Deaths from the earthquake and tsunami that smashed northeastern Japan could surpass 10,000 in an area closest to the epicenter, a local official said Monday, as search teams picked through the rubble hoping to locate survivors.

Powerful aftershocks and the growing crisis at a damaged nuclear power plant hampered rescue efforts and deliveries of humanitarian aid. Millions of survivors were spending a fourth night without water, food or heat in near-freezing temperatures along Japan's devastated coast. 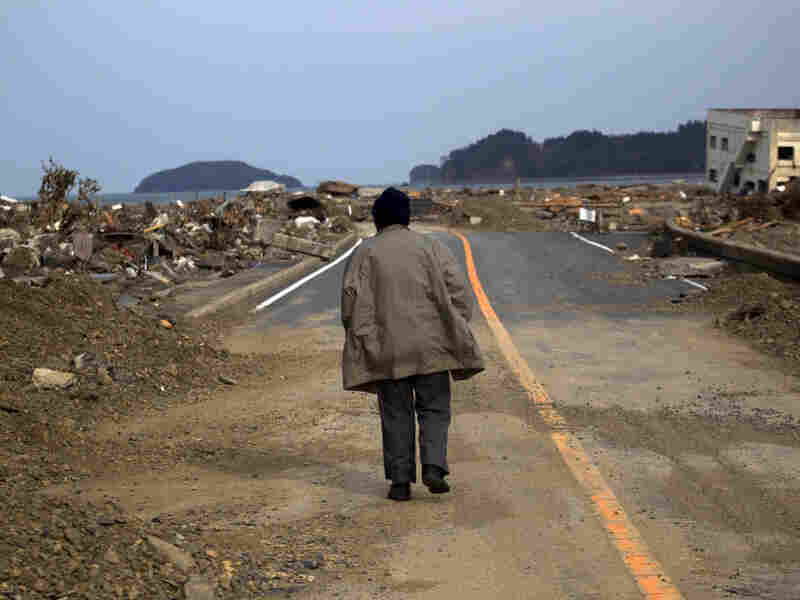 A Japanese earthquake and tsunami survivor walks alone Monday on a road past the destroyed village of Saito in northeastern Japan. David Guttenfelder/AP hide caption 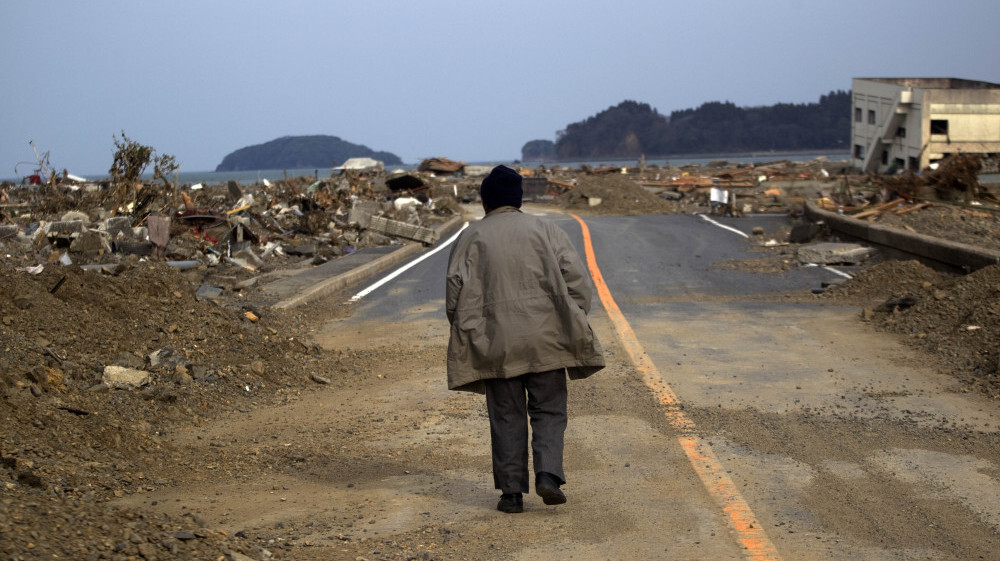 A Japanese earthquake and tsunami survivor walks alone Monday on a road past the destroyed village of Saito in northeastern Japan.

"This is Japan's most severe crisis since the war ended 65 years ago," Prime Minister Naoto Kan said.

The magnitude 8.9 quake and the giant waves that hit Friday pulverized much of northeastern Miyagi prefecture, where entire towns were essentially wiped out, and cars borne up by the force of the tsunami teetered on the roofs of buildings.

"There is so much debris, it is going to take weeks if not months to sift through it," NPR's Rob Gifford reported from the area.

At a makeshift evacuation shelter in Sendai — the city nearest the epicenter — Gifford said 3,000 people were crammed into a school with only basic toilets and not much else. "Really, the Japanese people have borne up very well considering the magnitude of this disaster," he said.

As officials grappled with the scope of the crisis, a second explosion rocked the Fukushima-Daiichi nuclear plant near the quake zone, sending clouds of white smoke rising from the facility. Monday's blast at reactor No. 3 — like a similar blast Saturday at reactor No. 1 — was blamed on explosive hydrogen gas coming from the overheated reactor core.

A government spokesman said there are signs that fuel rods were melting in all three reactors as operators dumped in seawater in a desperate effort to stave off a full meltdown. More than 180,000 people have been evacuated from the area in Fukushima.

The U.S. 7th Fleet, which deployed ships and aircraft to Japan to provide relief, moved away from the coast after discovering low-level radioactive contamination from a plume of smoke and steam released during the blasts.

The official death toll stood at more than 1,800, but the true number of dead is likely to be far higher. In Miyagi prefecture, which took the full force of the tsunami, a police official said 1,000 bodies were found scattered along the coastline Monday. The prefecture's police chief told NPR that more than 10,000 people are believed dead in his province alone.

Six teams of search dogs from Los Angeles arrived at Misawa Air Base in northern Japan on Monday en route to the quake zone.

The dogs, trained by the National Disaster Search Dog Foundation (SDF), were dispatched to find live victims, conscious or unconscious, in the debris left by the earthquake and tsunami.

Search parties arrived in the town of Soma, the worst-hit part in Fukushima prefecture, for the first time since the disaster hit. Ambulances stood by, and body bags were laid out in an area cleared of debris, as firefighters used hand picks and chain saws to clear the jumble of broken timber, plastic sheets, roofs, sludge, twisted cars, tangled power lines and household goods.

But the search was shortly abandoned after a magnitude 6.2 aftershock that triggered a new tsunami scare. Soldiers told residents in Soma to run to higher ground. Sirens wailed and troops barked out orders: "Find high ground! Get out of here!" Several uniformed soldiers were seen leading an old woman up a muddy hillside. The tsunami warning turned out to be a false alarm.

The coast has been hit by more than 150 aftershocks since Friday.

The Japanese Meteorological Agency on Sunday said there was a 70 percent chance of a magnitude 7.0 aftershock in the next three days. The agency also revised its estimate of the strength of the original quake to 9.0 from 8.8, but the U.S. Geological Survey's assessment remained at 8.9.

Hajime Sato, a government official in hard-hit Iwate prefecture, said body bags and coffins were in such short supply that the government may turn to foreign funeral homes for help.

"We have requested funeral homes across the nation to send us many body bags and coffins. But we simply don't have enough," he told The Associated Press. "We just did not expect such a thing to happen. It's just overwhelming."

To speed up funerals, the Japanese government said Monday that it was waiving the requirement to get permission from local authorities before going ahead with cremations.

The twin disasters have caused unimaginable deprivation for people of this industrialized country, which has not seen such hardships since World War II. In many areas, there is no running water, no power and four- to five-hour waits for gasoline. People are suppressing hunger with instant noodles or rice balls while dealing with the loss of loved ones and homes.

"People are surviving on little food and water. Things are simply not coming," Sato said. He added that authorities were receiving just 10 percent of the food and other supplies they need.

Japan has dispatched 100,000 troops to spearhead the aid effort, along with 120,000 blankets and bottles of water and 29,000 gallons of gasoline plus food to the affected areas. Nearly 1.5 million households had gone without water since the quake struck.

The American aircraft carrier USS Ronald Reagan arrived in the region last week and was dispatching helicopters to deliver food and water in Miyagi. According to public broadcaster NHK, some 310,000 people were living in emergency shelters or with relatives, and an additional 24,000 people were stranded.

Some 1.9 million households were still without electricity, which officials said will take days to restore. Tokyo Electric Power called for people to try to limit electricity use, but it held off on imposing three-hour, rolling blackouts Monday intended to help make up for a severe shortfall after the quake and tsunami rendered some nuclear plants inoperable.

Many regional train lines were suspended or operating on a limited schedule to help reduce the power load.

Yumi Takano was in her home in the seaside town of Agahara near Sendai when the quake struck. Her house withstood the violent shaking, but she said she knew she had to act quickly. Twenty-six minutes later, the tsunami demolished her town.

"I grabbed my neighbor, we both jumped into the car, and we were out of there within 15 minutes. Anyone who waited longer was swept away," she told NPR.

Takano's neighbor, Miyuki Arimatsu, said she "lost everything — the house, the car, everything," but at least she got out alive.

Makato Ito wasn't so lucky. He lost seven members of his extended family and has been wandering in a daze at evacuation centers looking for them.

"I'm giving up hope," said Hajime Watanabe, 38, a construction industry worker, who was the first in line at a closed gas station in Sendai, told the AP. Just then, an emergency worker came over and told him that if the station opens at all, it would pump gasoline only to emergency teams and essential government workers.

"I never imagined we would be in such a situation," Watanabe said. "I had a good life before. Now we have nothing. No gas, no electricity, no water."

Takashi Furuma, a seismologist at Tokyo University, said Japan wasn't caught off-guard by the quake, but that it does show the limits of man's capabilities and the need for some humility and respect for nature.

"The earthquake was much bigger than what we expected. That's why the damage was so great," Furuma told NPR. "This shows that from the great perspective of nature and Earth, our knowledge is minuscule.

"We don't know how long it will take for the economy to recover and for us to rebuild [from this quake]. But we must not be depressed or devastated by this. We must learn valuable lessons from it in order to prepare for the next earthquake," he said.

The Bank of Japan, the country's central bank, pumped another 5 trillion yen ($61.2 billion) into the financial system Tuesday to quell fears that Japan's banks could be overwhelmed by the impact of the disaster.

The injection comes a day after the central bank fed a record 15 trillion yen into money markets and eased monetary policy to support the economy.

The injections have helped stabilize currency markets. But stock markets dived for a second day as investors unloaded assets on escalating worries of a nuclear crisis. The benchmark Nikkei 225 stock average shed 6.5 percent to 8,999.73 — its lowest level in four months. The decline wiped out this year's gains.

Preliminary estimates showed losses from the catastrophe could run into the tens of billions of dollars as major companies — including carmakers Toyota, Honda and Nissan — are forced to idle production plants.

Paul Romano, the chief operating officer of U.S.-based Fusion Trade Inc., a company that buys and sells electronic components, said the disruption in the supply chain from Japan "may slow down production, waiting for chips."

The manufacturers are "not going to be able to produce everything they've committed to produce. So people are going to have to wait a little bit longer for products," Romano told NPR.

But some economists say Friday's quake may have less of an economic impact than Japan's last major temblor, the 1995 Kobe quake.

"The northeast region is not as much of a man hub as western Japan, so that might contribute to the argument that the economic impact in the long term might not be as great," said Nicholas Szechenyi, a Japan specialist at the Center for Strategic and International Studies in Washington.

Japan's economy has been ailing for 20 years, barely managing to eke out weak growth between slowdowns. It is saddled by a massive public debt that, at 200 percent of gross domestic product, is the biggest among industrialized nations.

Preliminary estimates put repair costs from the earthquake and tsunami in the tens of billions of dollars — a huge blow for an already fragile economy that lost its place as the world's No. 2 to China last year.

With reporting from NPR's Rob Gifford in Sendai, Anthony Kuhn in Tokyo, Tom Gjelten and Joe Palca in Washington, D.C., and freelancers Danielle Karson in Washington and Doualy Xaykaothao near Fukushima. Material from The Associated Press was used in this story.