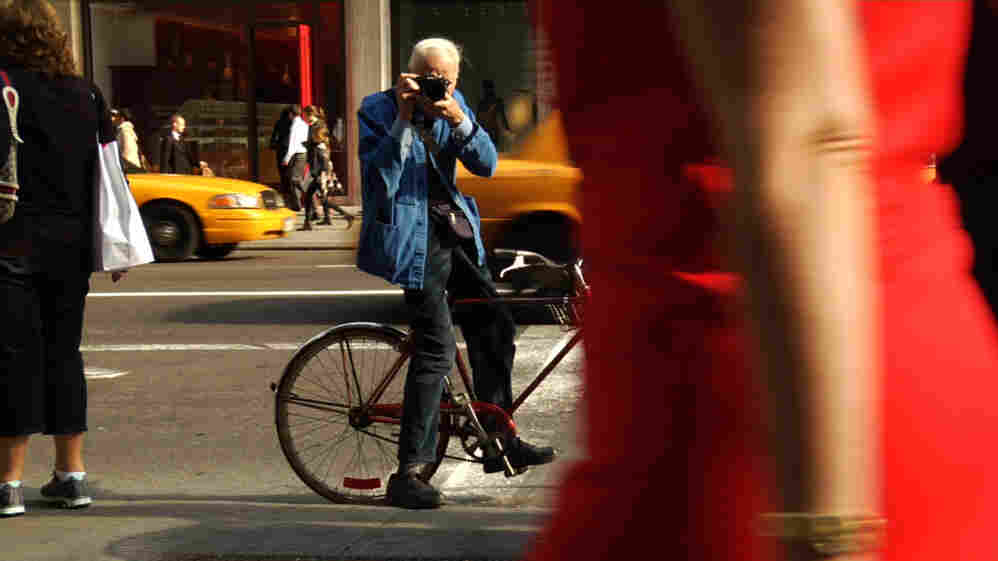 Snap and go: For more than 50 years, Bill Cunningham has navigated New York on his bicycle — he's had 27 stolen — chronicling the fashion spectrum from sidewalk to catwalk. Zeitgeist Films hide caption

Every morning, Bill Cunningham takes his bike out of a closet down the hall from his tiny studio apartment, and heads out on the streets to take pictures of what New Yorkers are wearing. That's been the photographer's routine for decades: In Cunningham, a youthful fascination for the everyday creativity of how we dress ourselves met a penchant for quiet observation, and transformed into a singular career documenting nearly a half-century of New York fashion. And when Cunningham talks fashion, it's with an eye ever on the sidewalks over the catwalks.

Richard Press' documentary turns the camera around on someone unused to being on this side of the lens. Now in his 80s, Cunningham is friendly, quick with a smile and a story, but there's also a sweet shyness and a humble reluctance to be the center of attention. Even at a reception held as he's about to be inducted into the French Order of Arts and Letters, he spends most of his time taking pictures of everyone else at the party. When someone points out the oddity of his working at an event in his honor, he responds that it's not work — it's pleasure.

Press gathers bits and pieces of information about the unusual path that led Cunningham to his singular position, gleaning tidbits from the fashion and society elite who adore him and from Cunningham himself. Ever on the fringes, he's still largely an unknown to many of the people he shoots; it's fascinating to watch the director draw out their speculations on Cunningham's origins, only to have the photographer contradict them when he finally reveals his own life story.

That story is not just his, but the story of New York itself. The equal billing in the title is no accident: This is a film about the city, about the ways it has changed through the decades and how that history was captured on all those miles of film passing through Cunningham's camera. Press also makes him the modest symbol of a bygone artistic era in the city, one of the last tenants at the famous Carnegie Hall studios that housed Marlon Brando, Leonard Bernstein and countless other giants of 20th century theater, music and dance.

The film can be ragged; Cunningham has an incredible vitality, so to keep up with him and not get in the way of his constant activity, Press shoots using small cameras that sometimes compromise clear picture and sound in favor of mobility. But in so doing he captures the tone of Cunningham's life — he's a man sometimes in breathless motion, at other times invisible in the shadows.

"He who seeks beauty will find it," Cunningham says, voice breaking, as he accepts that rare moment in the spotlight at the French awards ceremony. Few people embody the truth in those words as much as Cunningham, who can be seen seeking and finding beauty throughout the film.

When Press sits him down for some personal questions and asks if he ever regretted never having a romantic relationship, Cunningham shows no signs of wanting to change even a moment that's come before. Given the boundlessness of his enthusiasm and youthful energy, it's apparent that this is a man who found exactly what he was supposed to be doing, in exactly the city that needed him to do it. "I'll be your mirror, reflect what you are, in case you don't know," go the opening lines of the Velvet Underground song that Press uses to underline the final scenes of the film. His camera watches Cunningham taking pictures on the street, at work and at play all at once — acting, as he has for most of his life, as New York's mirror. (Recommended)