Accessibility links
'Hair' Hunk Will Swenson, Shedding His Inhibitions Again In 'Priscilla' A stand-out in Hair, he's back on Broadway with a starring role in Priscilla Queen of the Desert, an exuberant musical based on the glam-tacky 1994 film.

'Hair' Hunk Will Swenson, Shedding His Inhibitions Again In 'Priscilla'

'Hair' Hunk Will Swenson, Shedding His Inhibitions Again In 'Priscilla' 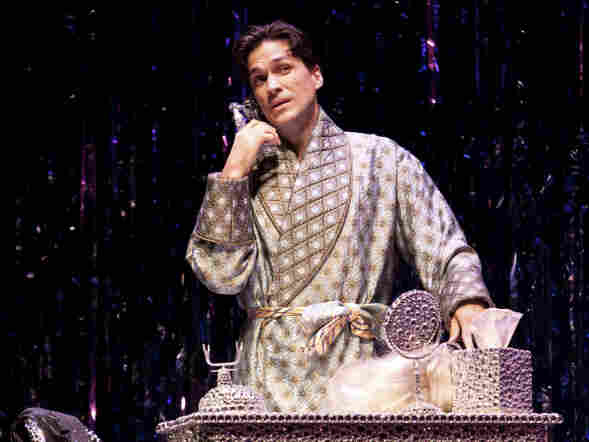 Will Swenson is back on Broadway with a starring role in Priscilla Queen of the Desert, a new jukebox musical adapted from the 1994 film about three friends who cross the Australian Outback in a tour bus. Joan Marcus/ hide caption 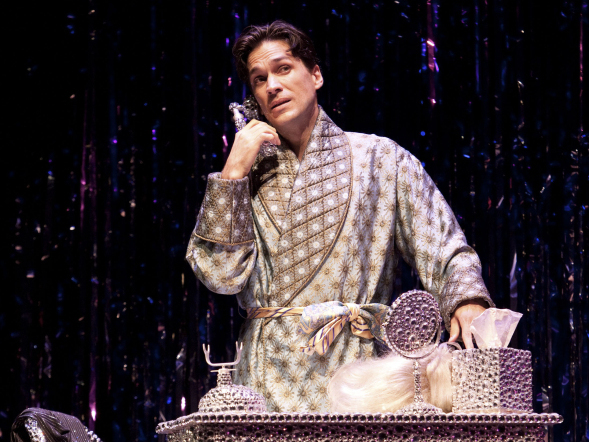 Will Swenson is back on Broadway with a starring role in Priscilla Queen of the Desert, a new jukebox musical adapted from the 1994 film about three friends who cross the Australian Outback in a tour bus.

Do you need a super-talented, boundlessly energetic actor to play a character with zero inhibitions in your musical? If so, you've probably already thought of Will Swenson, one of theater's go-to guys for that kind of role.

Swenson made his first big splash on the New York theater scene as George Berger, the sexy-clownish leader of Hair's hippie tribe, in the Public Theater's 40th-anniversary concert revival in Central Park. (He reprised the role for the full production that went on to Broadway and London.)

In between, he took a brief detour to appear Off Broadway in Rock of Ages, playing oversexed bad-boy rocker Stacee Jaxx. (That's the part that will be played in the upcoming film version by Tom Cruise.)

Now he's back on the boards as Tick, aka Mitzi, one of the drag-queen stars of Priscilla Queen of the Desert, the stage-musical adaptation of the 1994 film. The latest incarnation of the show is set to open at Broadway's Palace Theater on March 20.

Swenson's appetite for brassy, bawdy roles might strike some as ironic, given that the actor was raised as a Mormon. (He still admires many of the faith's tenets, though he left the church 10 years ago.) But he's an actor, after all, and very much a live-and-let-live guy — committed enough to the idea that he recently joined his Priscilla co-stars Nick Adams and Tony Sheldon in an It Gets Better video in support of kids who've been the targets of anti-gay bullying.

"When I was growing up, my best friend was gay, and he really, really suffered," Swenson explains. "He attempted suicide, but thank God he didn't succeed. Sadly, it's epidemic in the [Mormon] culture that gay kids grow up being told they're unnatural and an abhorrence before God. I can't think of anything worse to say to a child.

"When I left the church, I never felt I had to attack it, because I gained so much good from it," he says. "The values that they teach in general are so important and beautiful. But it becomes a problem when all of that turns to righteous indignation and hypocrisy, and the ugly result is kids killing themselves."

In private life, Swenson is in a relationship with Broadway and TV star Audra McDonald, with whom he appeared onstage in 110 in the Shade; she was Lizzie, the female lead, while he performed in the ensemble and understudied Starbuck, the male lead. ("I went on a few times in the part; I think that's when the sparks began to fly," he says.)

The couple reprised that show at a small theater Will's brother runs in Orem, Utah, playing opposite each other. Now Audra's guy is back on the boards in New York City, in one of the most fabulous new musicals of the spring season. Here's what he had to say in a recent phone chat: 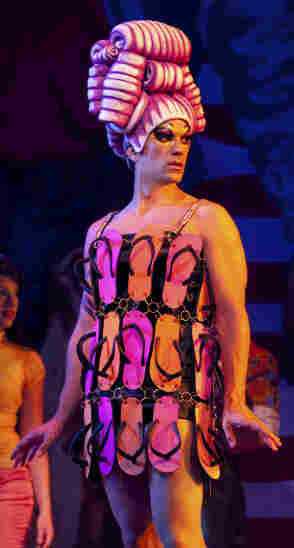 Swenson's research for his role included going out to London bars in full drag — though not in this flip-flops outfit, recreated for the stage from the one in the film. Joan Marcus/ hide caption 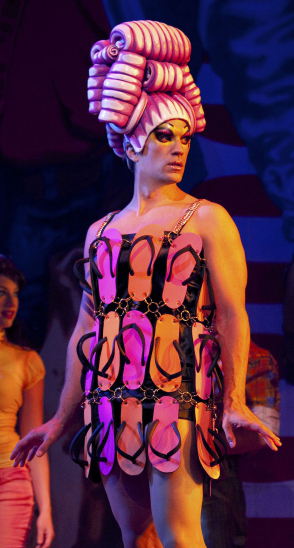 Swenson's research for his role included going out to London bars in full drag — though not in this flip-flops outfit, recreated for the stage from the one in the film.

Is this show going to be as much fun as I think it is?

I hope so. We had a great run in Toronto; people were always on their feet at the end of the night. The music is crazy fun, the costumes are insane, and the characters are really engaging. The show's got a lot of heart.

What kind of research did you do to play a drag queen?

Funny you should ask. I was up for the part around the time Hair was closing on Broadway, and then we took that show to London. The second we landed there, I got the offer for Priscilla. I accepted, and then I thought, "I've got to do some homework." So I talked my friend Gavin Creel into going out with me in drag one night. We had some guys come over to make us up; we got into full drag, and we went out on the town. We hit gay bars, straight bars. It was very enlightening.

Did you see the film of Priscilla when it was first released?

I saw it a year or two later; it came out when I was dutifully serving my Mormon mission in Ecuador, so I didn't see it till I got back. I knew nothing about drag culture, but I loved the sassiness of the movie, and I loved the ABBA songs.

For the stage version, obviously, ABBA was off the table.

Yes, because they've already got their own little musical on Broadway.

What songs do you perform in the show?

Well, when I'm not singing, I'm lip-synching, so I get to do just about everything. There's "I Will Survive," "It's Raining Men," "I Love the Nightlife." I also have some of the mellow stuff, because my character has the more heart-rending storyline: "Always on My Mind," "I Say a Little Prayer."

I guess we came pretty close to having "I Say a Little Prayer" in two Broadway shows at the same time.

Yes. When I heard they were putting it into Promises, Promises for Kristin [Chenoweth], I thought, "Oh, come on! She sings so much better than I do."

What are some of your favorite moments in Priscilla? 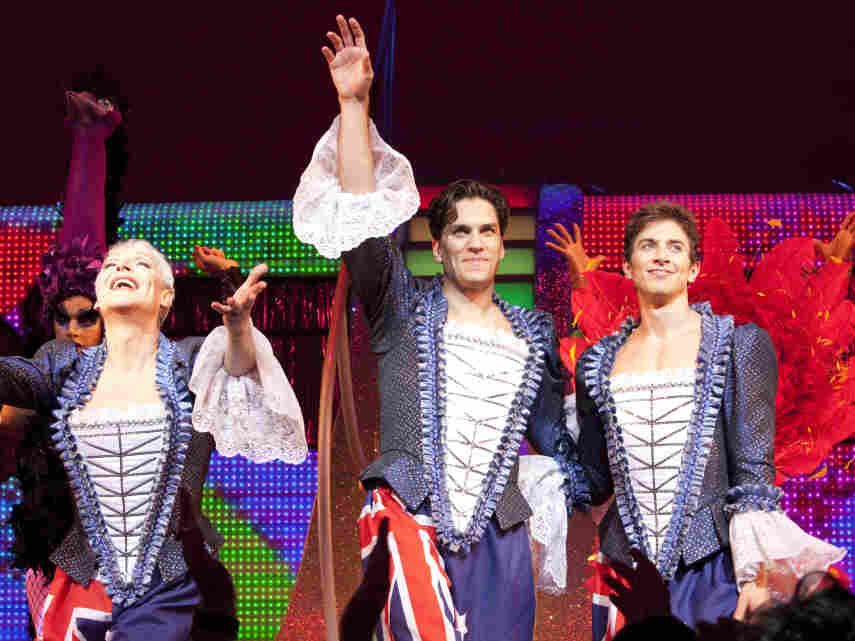 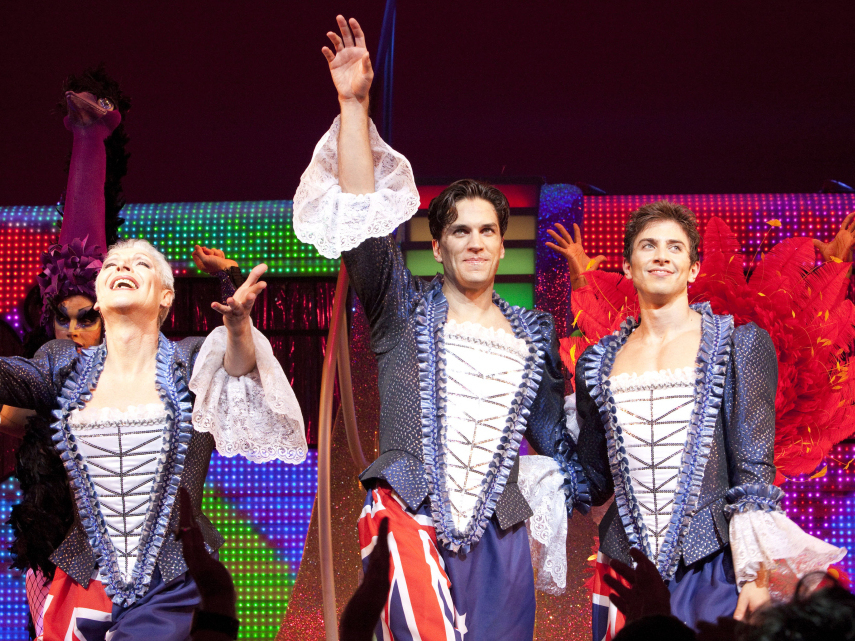 It changes from night to night. If it's a really rambunctious night, then "I Will Survive" is a blast, because we're in these eight-foot-tall costumes with massive headdresses. The audience goes nuts for that song; it's kind of the quintessential gay tune. But I also love "Always on My Mind," which I sing with the boy who plays my son.

Would you say that you're a fan of jukebox musicals if they're done well?

Absolutely. If the story engages you, then fine, do 100 jukebox musicals a year. Jersey Boys is a jukebox musical, but the story is told artfully and the show is directed perfectly. I think Rock of Ages is also really engaging, and Priscilla. But then there have been a whole bunch of jukebox musicals where you think, "What's the point? This is just an excuse to hear these songs. Let's go to a concert."

It's great to have you back on Broadway after your London sojourn. Is everything fine with you and Audra?

It is, knock on wood. I'm insanely lucky that she hasn't yet figured out what a dork I am. We've got a great thing going, and our kids are really good friends; I have two boys from my marriage, she has a daughter from her marriage, and now we're like this little Brady Bunch.

It was bizarre, because everyone I went to high school and college with came to see the show. But it was great to be onstage with Audra in this little 200-seat theater in the round, in the community where I grew up. It was a solid production with a really talented cast. The energy in the theater was electric.

Speaking of Utah: Are you accepted by friends and family who are still in the Mormon church?

So they're not required to shun you?

No, but there are those who choose to.

Do you identify as a member of any religion at this point?

When I left the Mormon church, I made a point of saying that I was on a theological sabbatical. That was 10 years ago. Since then, I've tried to push more into personal spirituality.

I know you co-wrote, directed, and acted in a film called Sons of Provo, but I haven't seen it.

You must! It's a very tongue-in-cheek, Christopher Guest type of film about a Mormon boy band. They think they're the best thing since sliced bread, but they're really kind of clueless.

How much do you know about The Book of Mormon – I mean the new Broadway show, not the actual book?

I have a couple of friends in it, and Audra went to the first preview. From what I've heard, I'm pretty sure it will be my favorite musical ever. Mormonism aside, I think irreverence is one of the funniest forms of comedy. I can't wait to see it.

Then you don't anticipate being offended?

Oh, I probably will be offended, but that's part of the fun. Matt Stone and Trey Parker [the South Park creators behind the show] are the kings of blanket offensiveness.

It sounds like the show has a very different spirit from Hair or Priscilla. Now that you've done Hair at the Delacorte, on Broadway, and in London, what would you say is your major take-away from the experience?

My hippie family. We took that journey together over the course of three years. It's not too often that a group sticks together that long in the theater. Hair is all about love, joy, peace, and happiness, and we couldn't help letting those attributes rub off on us.

Back to Priscilla: I understand that the tune stack for the show isn't quite the same as it was when the show played in Australia, New Zealand, and London.

It's largely the same. The big change is that, as a substitute for the ABBA obsession that the Adam character has in the film, they went with Kylie Minogue for those productions. She's somewhat lesser known here, so now those songs have been switched to Madonna songs.

I was at the recording sessions for the cast album, but I didn't get a chance to ask you then: Is it especially nerve-wracking to record covers, as opposed to new material?

I never really thought about that, so I guess not. You become an actor to put your own stamp on things and tell a story your own way, so to try to copy someone else's version of a song is probably a mistake. At the same time, you do have to honor the people who came before you. When Jennifer Hudson sings "And I Am Telling You I'm Not Going," we'd all be disappointed if she didn't at least give a nod to Jennifer Holliday. So that's a very good question! I guess, when I do covers, I'm selfish enough to make it all about me.