Accessibility links
With Spring Comes Fighting Season In Afghanistan Afghan officials say this time will be a test of the gains made last year, especially around Kandahar, after President Obama ordered a surge of 30,000 additional troops into the country. The southern city was the birthplace of the Taliban movement and a stronghold for the insurgents. 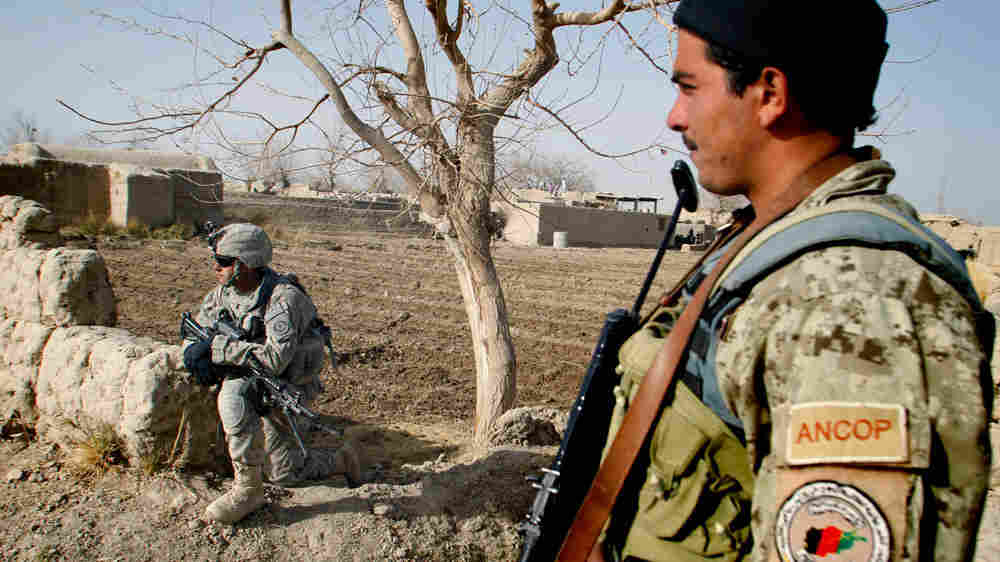 Spring is coming to Afghanistan — and with it, the start of the yearly fighting season between insurgents, the government and the NATO-led coalition.

Afghan officials say the fighting season will be a test of the gains made last year, especially around Kandahar, after President Obama ordered a surge of 30,000 additional troops into the country.

The southern city was the birthplace of the Taliban movement and a stronghold for the insurgents.

No one doubts that there will be months of bloody fighting ahead, but many people are saying the nature of the conflict will be different.

Brigadier Gen. Ken Dahl points to a map that shows the districts around Kandahar, areas that were firmly under Taliban control last year.

In the past, he says, mid-level Taliban commanders left those areas during the winter, using the time to rest and re-arm at hideouts in Pakistan.

"Our intelligence tells us annually this is about the time that those mid-level leaders will come back," Dahl says.

He says the usual insurgent tactic has been to re-form fighting units in the spring and reassert control over local villages.

"We think that they're going to be challenged in re-forming those gangs," he says, "because when they return this spring, they're seeing things that they haven't had to face before."

Dahl is the deputy commander of the Army's 10th Mountain Division. He points to dots on the map where his soldiers and Afghan army troops are occupying ground where the Taliban formerly set up headquarters, recruited fighters and stored weapons.

I think the Taliban will be — probably be a little surprised as to what the Afghan has achieved in this area over the quieter season. I really do. How will the Taliban react? I wish I knew.

One of those districts is Panjwai, a fertile farming area.

Until just over a month ago, the Taliban military commander there was a 26-year-old fighter named Haji Toor Jan.

Toor Jan says the fighting won't be as intense this summer, because the Afghan government now has real control over areas that it couldn't enter last year. He himself quit the Taliban last month along with some of his fighters, joining a re-integration program run by the Afghan government.

Haji Fazal Mohammad is a member of the local Council of Elders from Panjwai, a group that works with the government.

He says lower-level Taliban commanders like Toor Jan know that they have run out of options.

The Taliban commanders face a dilemma, he says. If they come to Afghanistan, they have only two options: surrender or die.

But Fazal Mohammad says defections by lower-level insurgents in Afghanistan won't stop the Taliban leadership in Pakistan from planning attacks. Instead, he says, they will change their tactics.

They are unable to fight directly, he says, so they'll use more suicide attacks and roadside bombs.

Mohammad says he also expects more targeted assassinations of pro-government leaders. He says he received a warning from the Afghan police just the day before, saying that his own name is on a Taliban assassination list.

Police Col. Shirzad, the chief of security for Kandahar, says even the Taliban's capacity for assassinations has been eroded.

The Taliban fighter here today, he says, is a man who's living with empty pockets. He may have just one pistol with five bullets, and he can't even carry out a mission to kill some defenseless elder, he says.

Brigadier Gen. Bruce Scott is an Australian soldier who's helping to train Afghan police to deal with any changes in insurgent tactics. He says the emphasis has been on recruiting and training police to provide security for local people and their leaders, especially in dealing with homemade bombs and suicide attackers.

"I think the Taliban will ... probably be a little surprised as to what the Afghan has achieved in this area over the quieter season. I really do. How will the Taliban react? I wish I knew," he says.

Scott cautions that his predictions apply only to Kandahar and other provinces in the south of Afghanistan.

Other commanders worry that pressure on the Taliban in those areas may simply mean that insurgents will concentrate their efforts on places where the government has less of a presence, including provinces in the north and west that have been relatively quiet until now.