Accessibility links
Japan's Survivors Bid Dignified Farewell To Deceased The earthquake and tsunami that ravaged Japan's northeast have torn the social fabric of many communities and wrought havoc on the normal cycles of life and death. In the northern city of Kesennuma, members of the community are struggling to maintain dignity and respect as they send off the deceased. 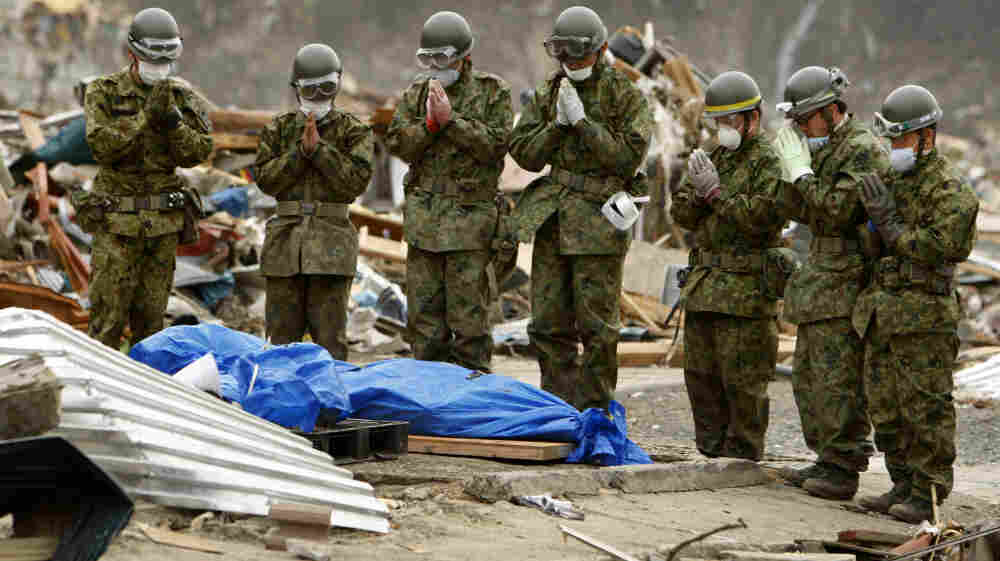 Members of Japan Self-Defense Force pray for the body of a tsunami victim wrapped in a tarp in Onagawa, Miyagi Prefecture. Shuji Kajiyama/AP hide caption 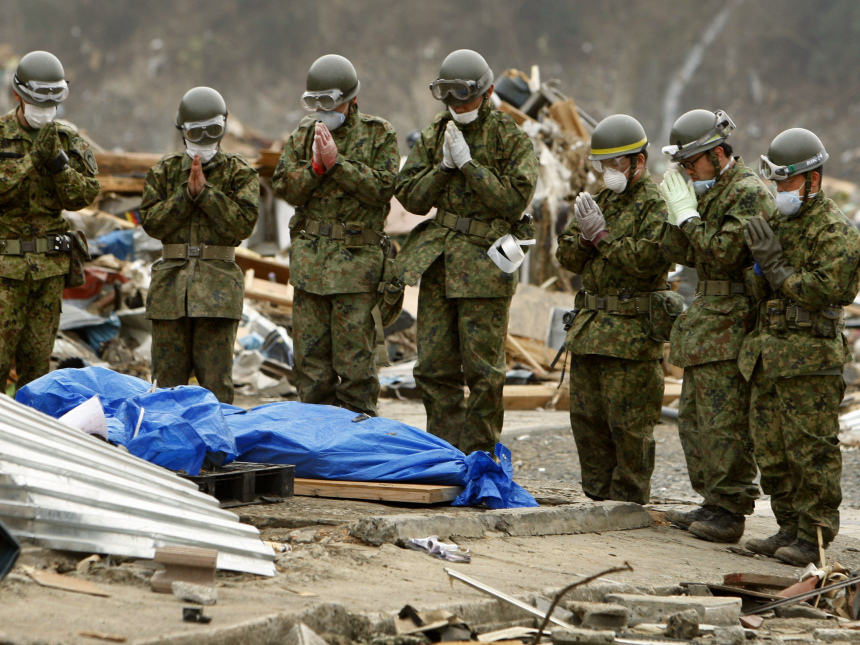 Members of Japan Self-Defense Force pray for the body of a tsunami victim wrapped in a tarp in Onagawa, Miyagi Prefecture.

The earthquake and tsunami that ravaged Japan's northeast has torn the social fabric of many communities wrought havoc on the normal cycles of life and death. In the northern city of Kesennuma, where at least 300 people were killed by the tsunami, communities are struggling to maintain dignity and respect as they send off the deceased.

Takakazu Yamazaki, a Kesennuma municipal government employee, remembers speaking to his parents by phone not long before the earthquake and tsunami hit. "My parents were in Kesennuma for shopping," he says. "On the way back, in Oya, they were hit by the tsunami and drowned in their car. They were found three days later." 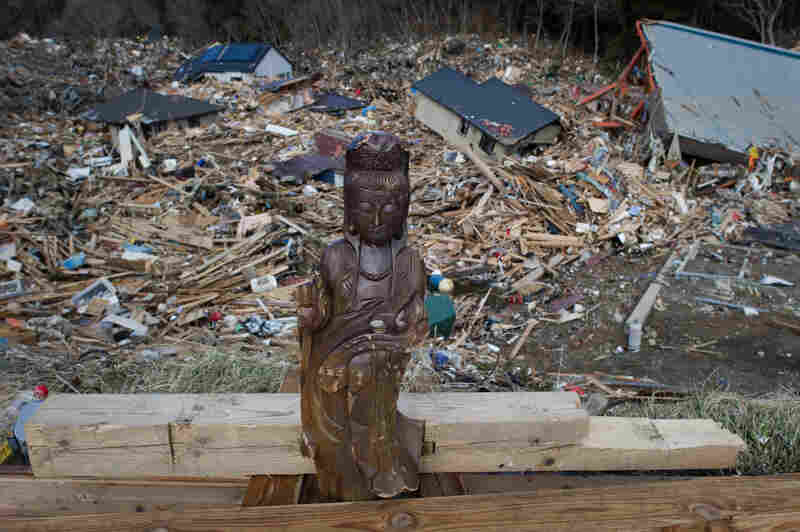 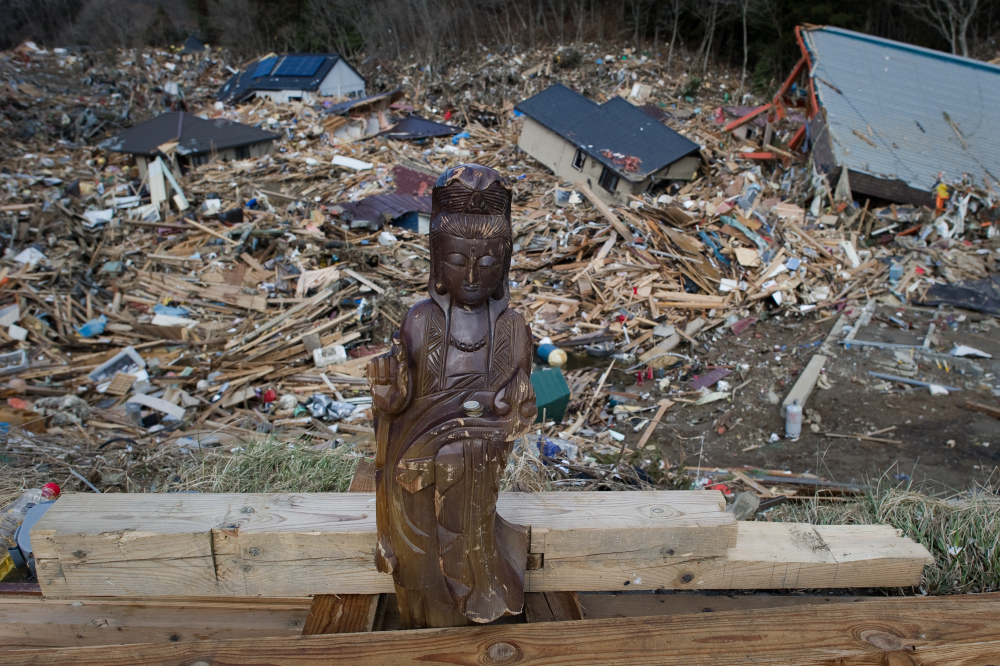 A religious statue placed by local residents stands among the rubble in Kesennuma.

Yamazaki says the tsunami left his home in a neighboring town looking like an air raid had flattened it. The tsunami, he says, destroyed his ancestors' tombs at a local Buddhist temple.

But amidst the devastation, Yamazaki still finds reasons to be grateful. "I'm lucky my parents' bodies were found," he says. "They are intact and can be cremated. I think many others were washed out to sea and still haven't been found."

At a crematorium in Kesennuma, members of the Yamazaki family form two lines before the coffins of their elders. Attendants strike small metal bowls on altars in front of the coffins. Monks use their resonant sound to calm their minds for meditation. As each bowl is struck, a member of the family steps forward and offers incense at the altar.

When the Yamazaki family members are finished paying their last respects, crematorium manager Hitoshi Osaka turns on the ovens. The crematorium has a backup generator, just in case of emergencies like this.

I'm lucky my parents' bodies were found. They are intact and can be cremated. I think many others were washed out to sea and still haven't been found.

Osaka says each cremation takes two hours, and with three ovens, he can cremate six bodies a day. That's usually enough for a city where the population of 70,000 is declining and aging. But the current disaster has overwhelmed his facility, he says, and it will take him months to work through the backlog of cremations.

"At the moment we are fully booked for March and April," Osaka says. "Probably until May."

Usually, says Osaka, families are formally dressed in black and have large groups. But few families can afford the luxury of such formality under the current harsh situation. Osaka says the funeral groups are smaller, because downed telephone lines keep them from communicating. Many of the bodies, he adds, now come in bags instead of coffins. 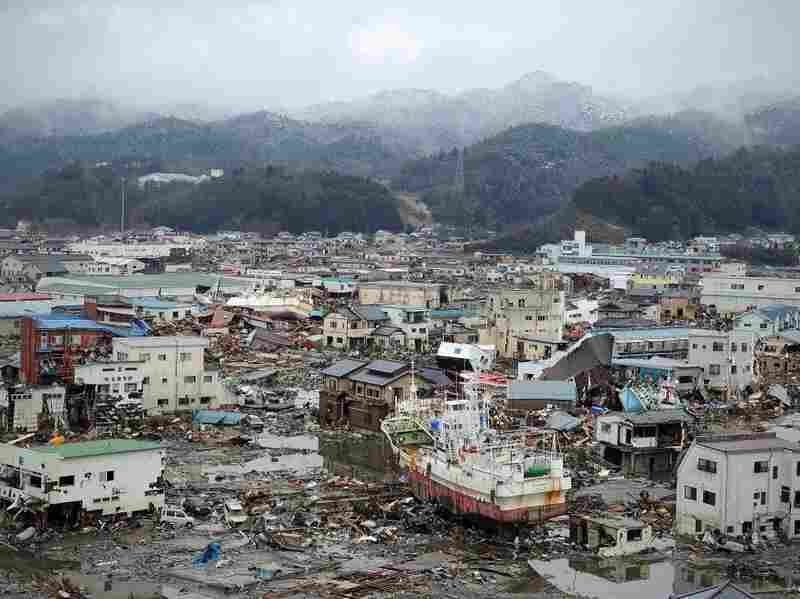 In the northern city of Kesennuma, at least 300 people were killed by the tsunami that struck on March 11. Crematoriums are overwhelmed by demand for their services, leaving grieving family members struggling to give their loved ones a proper farewell. Philippe Lopez/AFP/Getty Images hide caption

"Yesterday, three people came with backpacks on," Osaka says. "They weren't wearing formal suits. They were wearing the same clothes they wore when they were evacuated. It's hard just to get here."

Yamazaki will be keeping his parents' ashes at home until Buddhist monks can conduct a proper funeral service. Kesennuma's Buddhist temples already have a backlog of services to perform. Down the hill from the crematorium is the Temple of Stilled Thoughts. Deputy abbot Hatsuyo Takahashi says temple staff have their hands full caring for about one hundred evacuees.

"In this kind of disaster and emergency, we would like to give people a place to pray. We are opening the temple to all as a place of refuge."

She says the disaster may be a warning to mankind, but its meaning may be hard for humans to fathom. For now, it seems, people are busy with the immediate tasks at hand, leaving the contemplation for later.