Accessibility links
Japan Calls For Help Evacuating At-Risk Residents The Japanese government is mobilizing civilian and military teams to help residents and hospital patients evacuate from the exclusion zone around the stricken Fukushima Dai-ichi nuclear power plant. Still, some people living along the edge of the zone have refused to leave their homes. 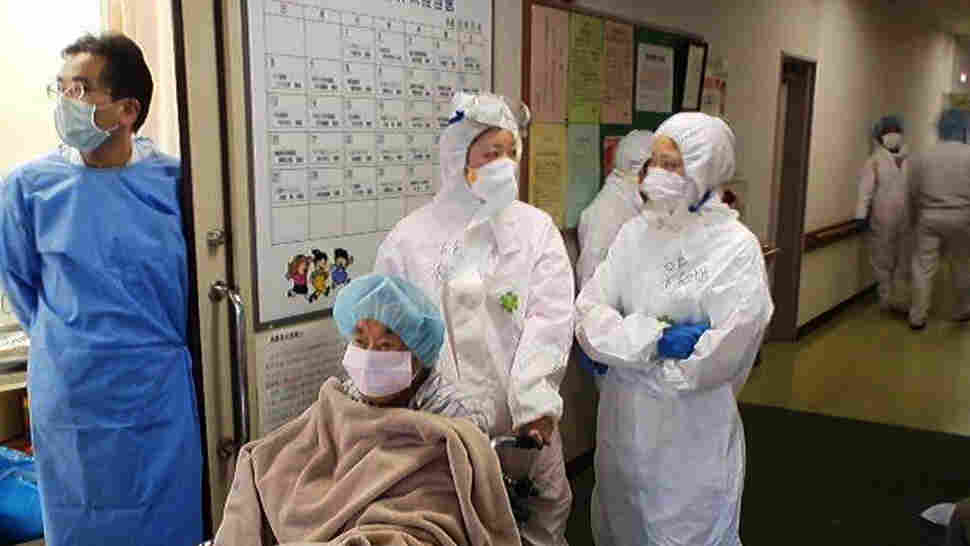 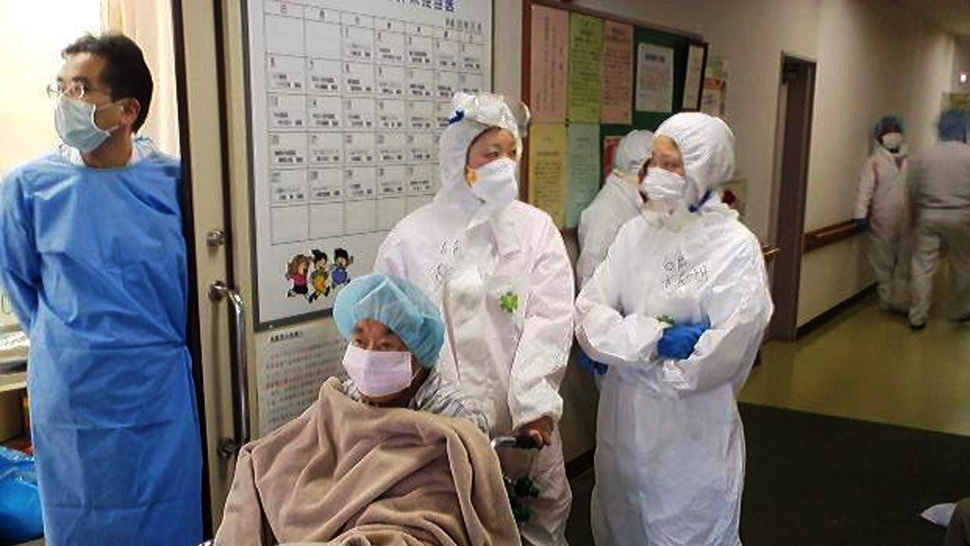 Nurses wear radiation protection suits at a hospital in Minamisoma city in Fukushima prefecture on March 16.

The Japanese government has evacuated most of the people within a 12-mile radius of the stricken Fukushima Dai-ichi nuclear power plant. The U.S. government, meanwhile, has told Americans to evacuate an area within 50 miles of the plant.

The Haramachi Central Obstetrics and Gynecology hospital is in the town of Minamisoma, right on the border of the exclusion zone. In recent days, the hospital has not just been taking care of mothers and babies, but also elderly people and anyone else who had not evacuated.

The imposition of the exclusion zone has meant that many larger hospitals in the area have closed already, and this hospital has been left to care for anyone needed any kind of medical attention. Now, it too has run out of medicine and Dr. Kyoichi Takahashi, president of the hospital, says he is going to have to close, even though strictly speaking he doesn't need to.

"Those who are leaving the town are all in tears, saying they don't want to leave. Some say it may be the last time they see us, and they're worried they might never be able to come back," Takahashi says.

There are people in the exclusion zone who want to evacuate, but are not able to because they don't have any gas to drive, he says, but the government doesn't seem to have a comprehensive plan for getting everyone out. Takahashi paints a grim picture of the situation inside the exclusion zone, saying there are still bodies of people killed by the tsunami that can't be recovered. He says his staff wants to carry on, but he thinks they just can't do it any longer.

News reports say at least two patients have died at Omachi hospital, also on the edge of the exclusion zone, from a shortage of medicine, and the hospital has almost run out of food. The military was due to transfer 90 of the 160 patients to another town Saturday.

"Most of the patients now in the hospital are in serious condition," says Keiichi Kobayashi, an administrator at the hospital. "The ones who are not so serious will leave, but it's too dangerous to move the really sick patients."

The Japanese government is mobilizing civilian and military teams to help out. Officials have appealed for help abroad in dealing with the nuclear power plant and in humanitarian efforts to help the Japanese people.

The crisis has exposed serious differences about how much Japanese people trust their government. Some feel it has not been honest about the risks from the nuclear plant, but 40-year-old Naruhito Nishikiori says his 70-year-old mother won't leave her home even though the authorities are urging her to do so.

"I know that the government is measuring radiation levels every 30 minutes, so I feel safe. I wouldn't say I'm not worried at all, but I trust our government, so I'm staying here with my mother in her home," says Nishikiori.

Though that may be the case for now, the key issue in discussions of the exclusion zone is what happens if there is a meltdown in one or more of the nuclear reactors, or if some of the spent fuel rods catch fire, as they might. Then, scientists say, 12 miles will certainly not be far enough away from the plant, but it will be too late to flee. The balance for the Japanese government is weighing the likelihood of that happening, against the logistical difficulty of expanding the zone, and forcing the evacuation of tens of thousands of people.