Accessibility links
The 'Blood, Bones & Butter' Of Restaurant Work Gabrielle Hamilton is the chef and owner of Prune, a popular restaurant in New York City's East Village. She also has an MFA in fiction writing, something she put to use in writing her first book, the aptly titled Blood, Bones & Butter: The Inadvertent Education of a Reluctant Chef. 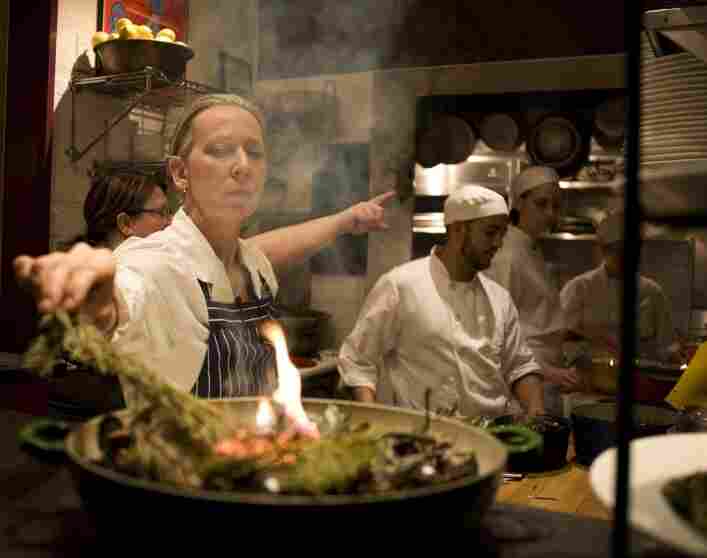 Gabrielle Hamilton in the kitchen of Prune. She opened the 30-seat East Village bistro in 1999, after traveling — and cooking — through France, Italy and Greece. Michelle Delorenzo/Courtesy of Gabrielle Hamilton hide caption 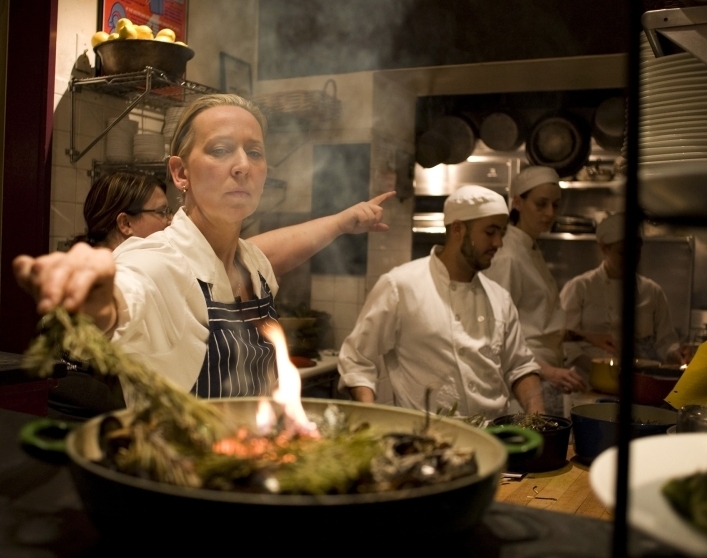 Gabrielle Hamilton in the kitchen of Prune. She opened the 30-seat East Village bistro in 1999, after traveling — and cooking — through France, Italy and Greece. 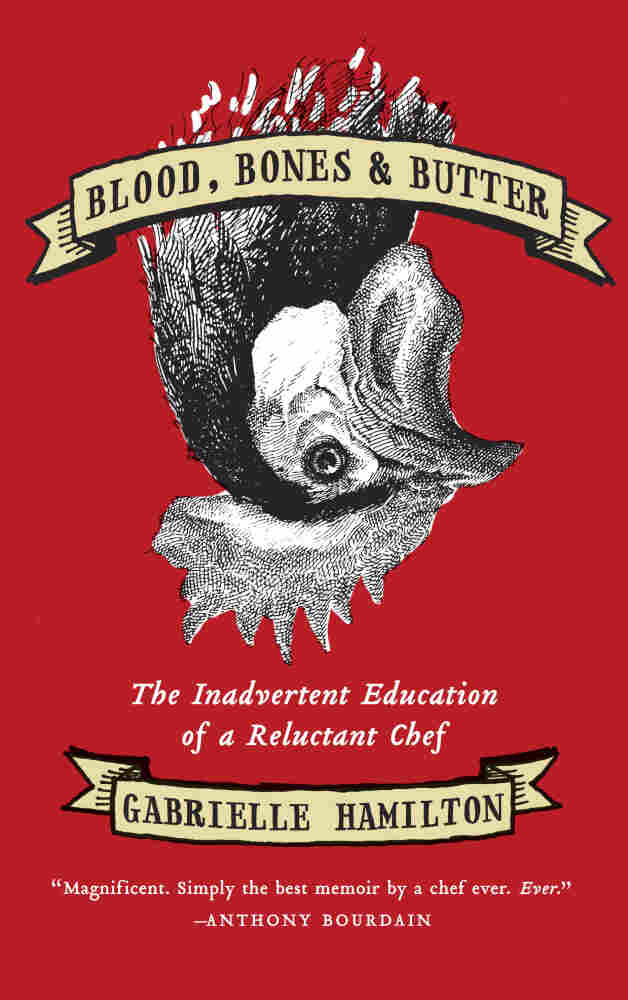 Gabrielle Hamilton has been the chef and owner of Prune, a popular American nouveau restaurant in New York City's East Village, since 1999. During this time, the well-known chef also earned an MFA in fiction writing from the University of Michigan, something she put to use in writing her first book (which has already reached No. 2 on the New York Times bestseller list), the aptly titled Blood, Bones & Butter: The Inadvertent Education of a Reluctant Chef.

Blood, Bones & Butter is the sort of hard-edged restaurant memoir we've come to expect from fellow New York chefs like Anthony Bourdain, who, coincidentally, described Hamilton's book as "simply the best memoir by a chef. Ever." But it's also the story of a young girl confused by her parents' sudden divorce, who turned to a life of crime and, perhaps even more perilous, restaurant work.

Hamilton named her restaurant after the nickname her mother gave her as a girl. She writes a lot about her French mother in Blood, Bones & Butter and, as she tells Weekend All Things Considered host Guy Raz, her mother's discipline and sense of thrift heavily influenced her and her cooking.

"She took us into the woods, we picked fiddlehead ferns, we knew how to hunt for chanterelle mushrooms, we had a garden, we went to the local farm and we got raw milk," Hamilton explains. "She had French wartime parents, so she had grown up highly attuned to, you know, the economy of feeding a family. So we were often just cutting away the moldy bit and getting to the rest of whatever was edible on the product itself. So we really learned to eat from her."

Hamilton's mother and father, who was a theater set designer, divorced when she was 11 years old. After the pair split, Hamilton found herself on her own and in need of a way to earn money, and she soon turned to the familiar world of kitchen work.

"I mean, between the two of them I [felt] like I knew how to wash dishes and clear plates and cook food, so it made sense to land in a restaurant kitchen," Hamilton says. 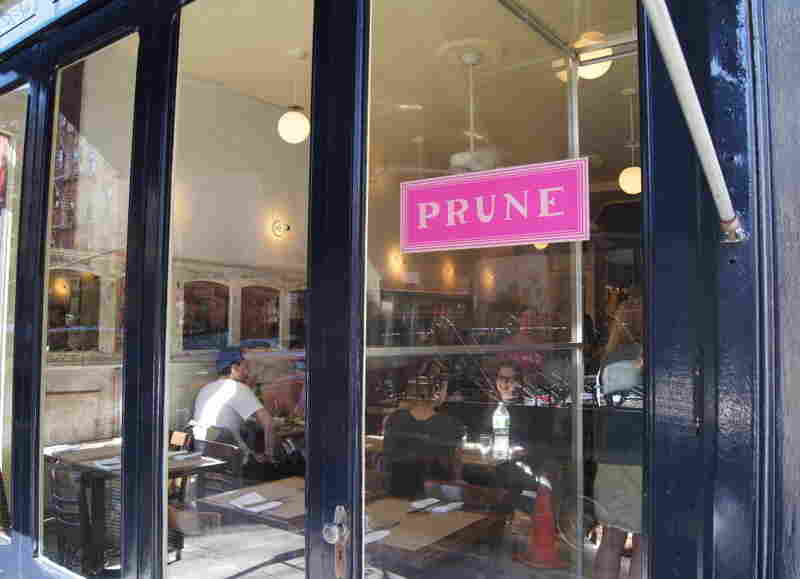 When Hamilton first walked into the East Village storefront that is now her restaurant Prune, she knew it was perfect. "I knew exactly what and how to cook in that kind of space ... and I knew immediately, even, what to call it," she says. Guy Raz/NPR hide caption 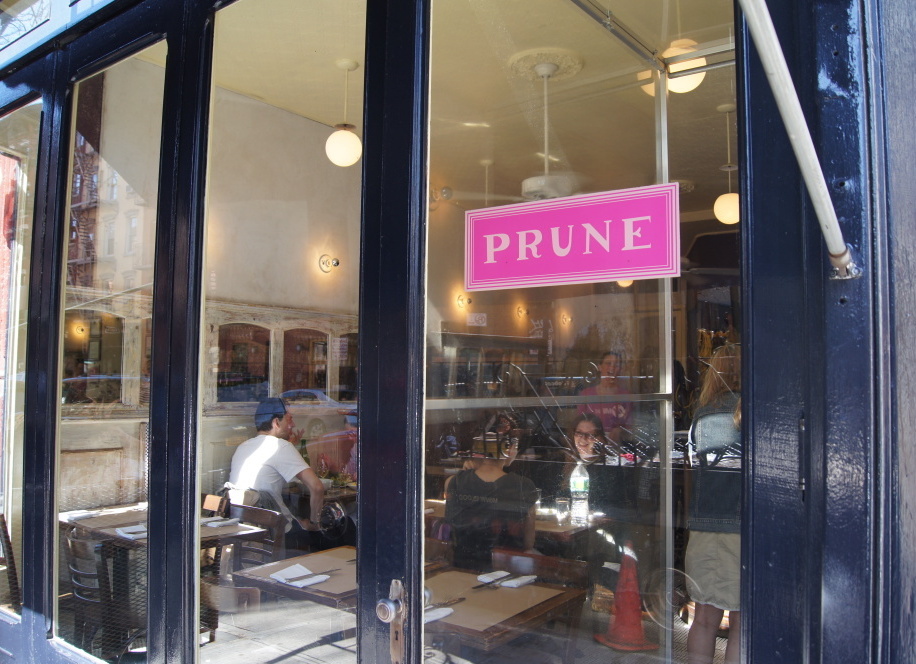 When Hamilton first walked into the East Village storefront that is now her restaurant Prune, she knew it was perfect. "I knew exactly what and how to cook in that kind of space ... and I knew immediately, even, what to call it," she says.

As Blood, Bones & Butter details, Hamilton spent the years that followed working in various restaurants and getting into trouble — stealing cars, doing hard drugs and almost getting arrested — before finally turning things around. She got married, had two kids and now devotes herself full-time to her work as a chef and restaurant owner, as well as her work as a writer. She has written for countless newspapers and magazines and sees this first book as only the beginning of her writing career.

"I really like the way writing and restaurant work go together — they sort of counterbalance and are an antidote to each other," she says. "So if I could, I'd like to stay right where I am: some writing, a lot of restaurant and my kids, and that's a pretty full life right there."

I was not looking to open a restaurant. That was never on my mind.

I was just dashing out to park the car one spring morning, when I ran into my neighbor Eric, a guy I knew only peripherally from years of living on the same block. I didn't even know his last name, but we often saw each other during that hectic morning ritual of alternate side parking that New Yorkers, or at least East Villagers, seem to barely accomplish in time to beat the meter maid. It's a twice a week early morning ritual, Mondays and Thursdays or Tuesdays and Fridays, depending on which side of the street you're on, in which everyone on the block with a car comes rushing out of their building to move their machines, still wearing their pajamas and with pillow creases still marking their faces. Eric was sitting on the stoop in front of a longshuttered restaurant space mid-block, and as I zoomed by in my sweatpants and hastily slipped-on clogs, we waved. He said, "You still cooking?"

I was, technically. I had taken an interim chef job at one of those huge West Side Highway catering companies where I had formerly been a freelancer while they performed a thorough talent search to find their real next chef. I was just a three-month placeholder, during the dead season, which is why I felt fine taking the job. I reasoned that it was a moderate way for me to make some money while I continued to write and to resolve my last lingering uncertainties about my place in a kitchen.

"Wanna take a look at this space?"

I was off that day, with big plans to sit on my couch procrastinating the writing of my novel-in-progress.

There was a faded yellow typewritten letter in the window from the former tenant--a French guy who had run a bistro that thrived for a brief but bright couple of years--advising customers that the restaurant would just be closing for a two-week vacation and renovation. They looked forward to seeing you soon! Bonnes Vacances! Two weeks had turned into two years, and I could see, from the second we stepped inside, that there had been no vacation planned at all.

It looked like the restaurant had desperately done business right up until 12:01 a.m., when the city marshal came and padlocked the place, leaving the coolers full of lamb shanks, dairy, and crème brûlées. There were racks of dirty dishes sitting outside the machine, which sat ajar, as if the dishwasher had just run downstairs for a few more clean towels and a gallon of pink liquid before running his next load. The pot sink was packed with dirty sauté pans. The pastry station had black shriveled pastry in the coolers, and the espresso machine had hard, spent pucks of powder fossilized into the ports. Next to the machine sat a stainless steel pitcher with long spoons in it, as if a café machiatto was in the works just as the city's assessor walked in the door with his huge ring of keys. There were cigarette butts in the ashtray, as if the early waiter had already sat down and begun his paperwork and tip sorting at the end of his shift.

Eric, who owned a couple of units upstairs in the coop and who was now putting some effort into sorting out the mess of the abandoned storefront, showed me around the restaurant as I held my T-shirt pressed over my nose and mouth. The place was putrid. The floors grabbed the soles of my shoes with every step. So much rat shit had melted in the summer heat and commingled with the rat urine over the two years that the space had sat there idle that it was like walking on old glue traps. I had to run outside for gulps of fresh air after several minutes in the restaurant.

The electricity, oddly, had not been cut off but the light bulbs had died, and most egregiously, the freon had run out in coolers that still had running fans. When I opened a door on the sauté station reaching refrigerator, I was hit by a blast of fetid warm air coming from decomposed lamb shanks and chicken carcasses. There were legions of living cockroaches. The basement was very dark. Only one tube of a fluorescent flickered overhead. It was impossible not to jump out of your skin with the creeps with every brush of your own hair on your own neck. In the walk-in, by the dim light of a weak flashlight, I stupidly opened a full case of apples only to have a gray, sooty cloud of spores—like a swarm of gnats—fly up into my nostrils and eyelashes. Twenty- five pounds of apples had rotted away to black dust.

And yet, even with the cockroaches crawling over bread baskets and sticky bottles of Pernod, I could see that the place had immense charm. There was an antique zinc bar with just four seats that had been salvaged from a bistro in France and shipped over. There were gorgeous antique mirrors everywhere, making the tiny space seem bigger than it was, and an old wooden banquette, and wrought-iron table bases. The floor, under all that sticky rat excreta, was laid with the exact same tiny hexagonal tiles that had been on the floor of a crêperie in Brittany where I had worked for a brief period in my early twenties. Even when gulping the comparatively fresh New York City air once back on the sidewalk, thinking I might have been poisoned in some way, I knew the space was exactly "me." There were ten sturdy burners. Just two ovens. And fewer than thirty seats. I could cook by hand, from stove to table, never let a propane brûlée torch near a piece of food, and if it came down to it, I could just reach over the pass and deliver the food myself. I knew exactly what and how to cook in that kind of space, I knew exactly what kind of fork we should have, I knew right away how the menu should read and how it would look handwritten, and I knew immediately, even, what to call it.

A thin blue line of electricity was running through my body. 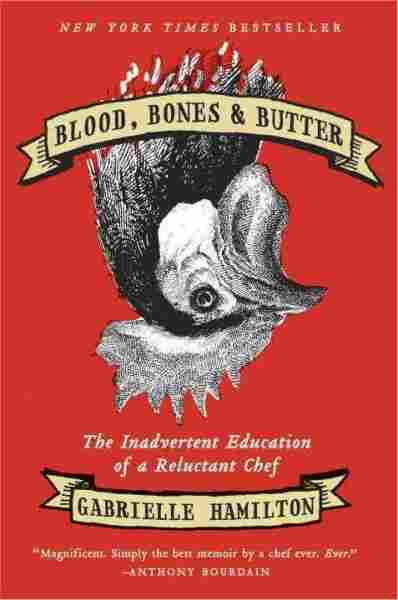 The Inadvertent Education of a Reluctant Chef