Accessibility links
Post Holiday Blues It began because of the Christmas tree. It was his job to carry the tree in and out of the house, to set it up in its metallic stand. It was her job to put the ornaments on and then take them off again. She had finished her task three days before and still the tree sat in its corner, nude, dead, the floors around it littered with discarded needles. 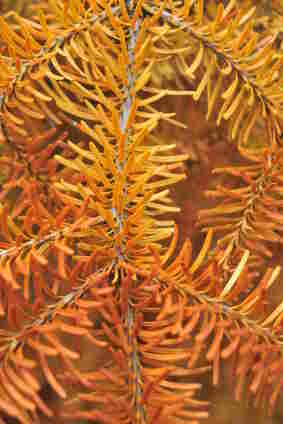 It began because of the Christmas tree. It was his job to carry the tree in and out of the house, to set it up in its metallic stand. It was her job to put the ornaments on and then take them off again. She had finished her task three days before and still the tree sat in its corner, nude, dead, the floors around it littered with discarded needles.

She disliked the sight of it not just because of its sad reminder of the holiday, but because of its uncaring air. The same sort of feeling hovered around their house in an undefined way. The frayed hammock. The rusted mailbox.

"Did you finish folding the laundry?" he asked her.

She bristled. "Why are you pestering me about that when that thing is still in here dying all over the carpet?"

"Where do you find a one-legged dog?" he said. It was a warning sign, the last attempt to defuse the situation before it exploded. She didn't respond. "Where you left it," he said.

From there the fight took its cold and bitter course.

After a predictable conclusion, she took the pile of clean laundry and threw it on the bed in the spare bedroom, soothing herself with the rhythm of folding and tucking. Here were the jeans he wanted. She set them aside, her excuse for returning to the next room to apologize. As she continued to fold she looked often at the jeans. She heard him moving about in the next room and touched the corner of the denim like a talisman.

When she had finished, she carefully put her clothes away in the drawers and took the jeans with her. The door of their room was ajar. Standing in the doorway she knew. It was something about the smell of the room. Innocent. Fresh. A return to emptiness. His favorite things were gone from the shelves. She breathed silently in the ransacked space, asking herself if it was a surprise and receiving no clear answer. Suddenly the thought that he may already be gone brought nauseating panic and she ran from the room.

He was there on the back deck with a cigarette in his hand and a duffel bag sitting at his side. Just as she had touched the pants, he touched the bag with the toe of his shoe.

She opened the door and went outside. He took a cigarette from the pack and lit it with the end of his own, then handed it to her without turning in her direction. It was very quiet in their tiny backyard. She could hear the drone of the streetlight in the front yard and the faint crackle of the ember as she drew the smoke into her lungs. It stung the back of her dry throat. The faint heaviness of the drug settled over her. Her stomach was empty.

Her life had, without her permission, turned into a tired retread of a country song.

"Everybody loves the sound of a train in the distance," she said. The lyric had come unbidden to her mind.

"Everybody thinks it's cool," said he.

She thought of words, and how the first word she had spoken was carefully recorded and curated. She wondered what her last word would be, and if there would be anyone there to record it.

He finished his cigarette, took up his bag, and left.

She went back into the quiet house with its dead tree. It wasn't until she discovered that he had taken the dog that she began to cry.