Accessibility links
Obama Balances Brazil Mission, Libyan Conflict As the world's seventh-largest economy, Brazil is a member of an exclusive club of influential developing nations. Obama aims to bolster the kind of economic relationships in Latin America that can add jobs for the struggling unemployed back home. 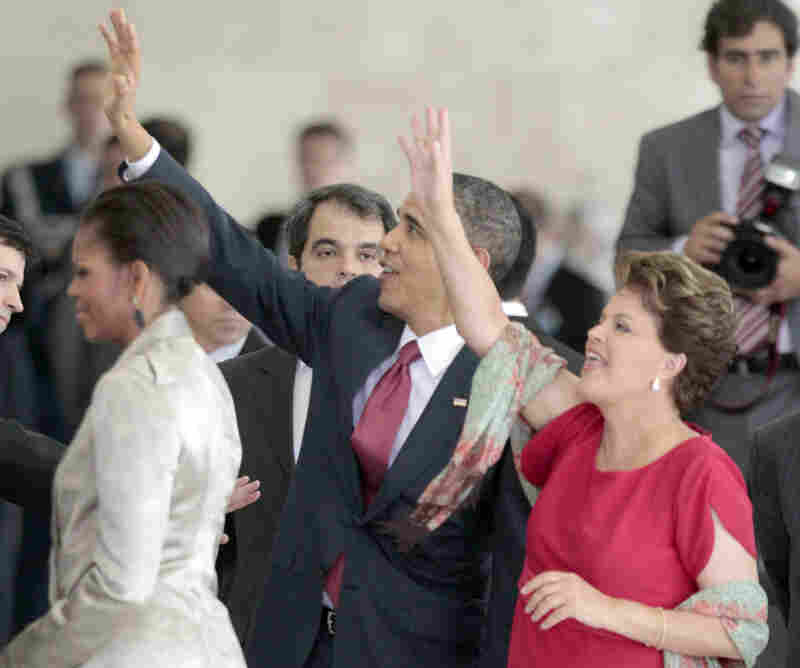 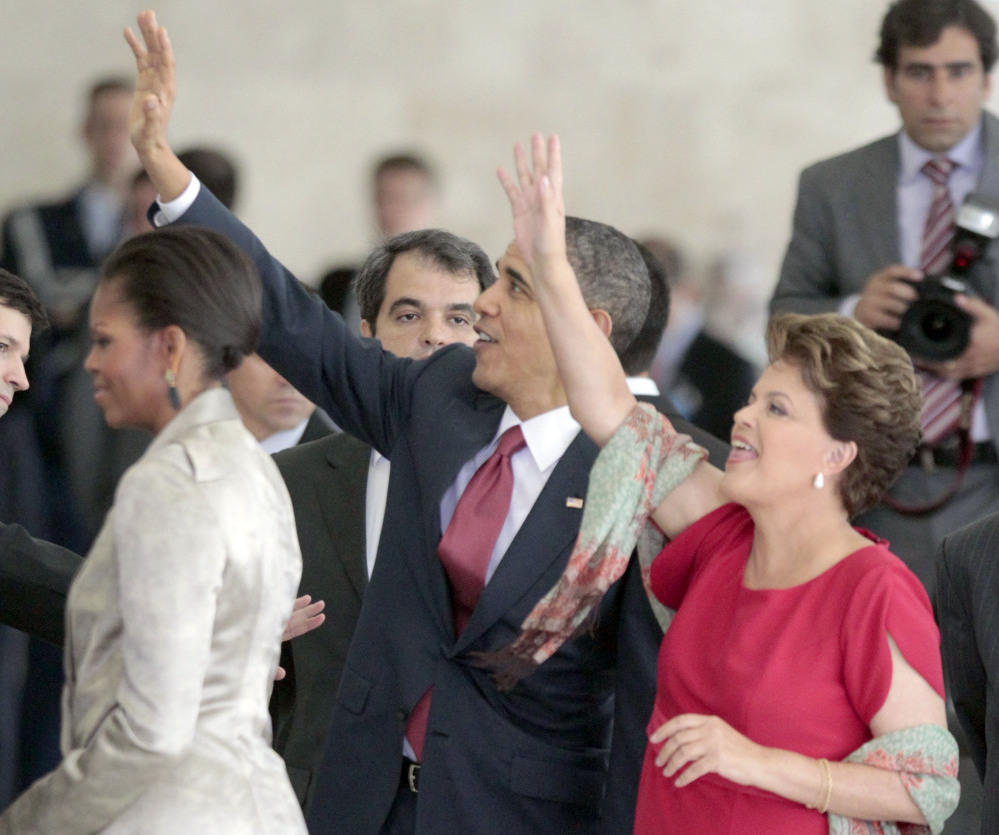 President Obama, center, and Brazilian President Dilma Vana Rousseff, right, wave to greeters on the balcony during the arrival ceremony at the Palacio do Planalto in Brasilia, Brazil, onÂ March 19.

As American missiles struck Libya, President Barack Obama doggedly promoted his Latin American agenda Saturday, praising Brazil as a soaring economic force and brimming market for trade. Back home, his message was all but lost in the roar over the Libyan conflict.

"The United States doesn't simply recognize Brazil's rise; we support it enthusiastically," Obama said from this capital city as he launched a five-day outreach mission that will also take him to Chile and El Salvador. He began in Brazil as a sign of solidary between the two largest democracies and economies in the Americas, and he sought to break through here with his themes of bold cooperation on energy, education and trade.

Yet the looming military action in Libya intruded throughout Obama's day of pleasantries and policy. Aides said the president was a fully engaged participant as events unfolded, huddling with his national security adviser, Tom Donilon, calling Sheikh Mohammed bin Zayed Al Nahyan of the United Arab Emirates, a vocal supporter of the no-fly zone resolution, and consulting with top national security staff, including Secretary of State Hillary Clinton, throughout the afternoon.

However, the cancellation of a planned news conference with Rousseff, which the White House said was Brazil's call, limited Obama's comments on the matter for much of the day. By late afternoon, Obama hastily added a statement on Libya to announce that the United States has begun military operations with its partners.

Obama's mission in Latin America is to bolster the kind of economic relationships that can add jobs for the struggling unemployed back home, while also proving the United States is engaged with neighbors whose support is needed in fighting terrorism, drugs and climate woes. For those reasons, the White House never showed any inclination to cancel the trip.

Brazil stands out for its strategic and economic importance to the United States. As the world's seventh-largest economy, it is a member of an exclusive club of influential developing nations, and Obama sought to elevate its stature alongside India and China.

"As the United States looks to Brazil, we see the chance to sell more goods and services to a rapidly-growing market of around 200 million consumers," Obama said to a meeting of corporate leaders, mindful to connect his travels to the concerns of voters back home. "For us, this is a jobs strategy."

Rousseff extended a warm welcome to Obama, citing his role as the first African American president and hers as the first female Brazilian president as evidence of nations overcoming barriers. She said that of all U.S. presidents who have visited Brazil, "You are the one that sees our country in the most vibrant moment."

Still, Rousseff made no effort to hide her frustration with the resistance Brazil has faced in becoming a permanent member of the United Nations Security Council and appealed for Obama's help in making needed changes at the U.N. She also chafed at US. policies that have imposed tariffs on Brazilian goods, including ethanol and cotton, and appealed for concrete action to improve the economic ties.

However, Obama came to Brazil with none of the deliverables Rousseff hoped for. He did not endorse Brazil's bid for the Security Council, saying only in a statement that he "expressed appreciation for Brazil's aspiration." That fell short of his November endorsement of India's quest for a permanent seat on the Security Council, saying it would elevate India to "its rightful place in the world."

There has been worry in the past week about events in the Middle East taking the focus off Brazil during Obama's trip, coming as it is at a moment when Brazil is economically strong and arguably has more political influence than ever. Anything that would take Obama's attention away from the advances Brazil wants to see takes some of the luster off his visit.
However, an official at Brazil's Foreign Ministry, speaking on condition of anonymity as he was not authorized to discuss the matter, said the issues the Brazil side has wanted to address were covered, and there was no sense the trip has lost its purpose.

Air Force One touched down in Brasilia in an early-morning mix of sunshine and raindrops. The president is traveling with his wife, Michelle Obama, daughters Sasha and Malia, and Mrs. Obama's mother, Marian Robinson. The Obamas flew to Rio de Janeiro at nightfall and ended their day there.