Accessibility links
Japan Relief Efforts Centered At U.S. Military Bases American military bases throughout Japan are being used as staging areas for disaster response teams. At Air Base Misawa, the work has been complicated by the loss of electricity and a Defense Department order that authorizes the departure of all U.S. military dependents from Japan's main island. 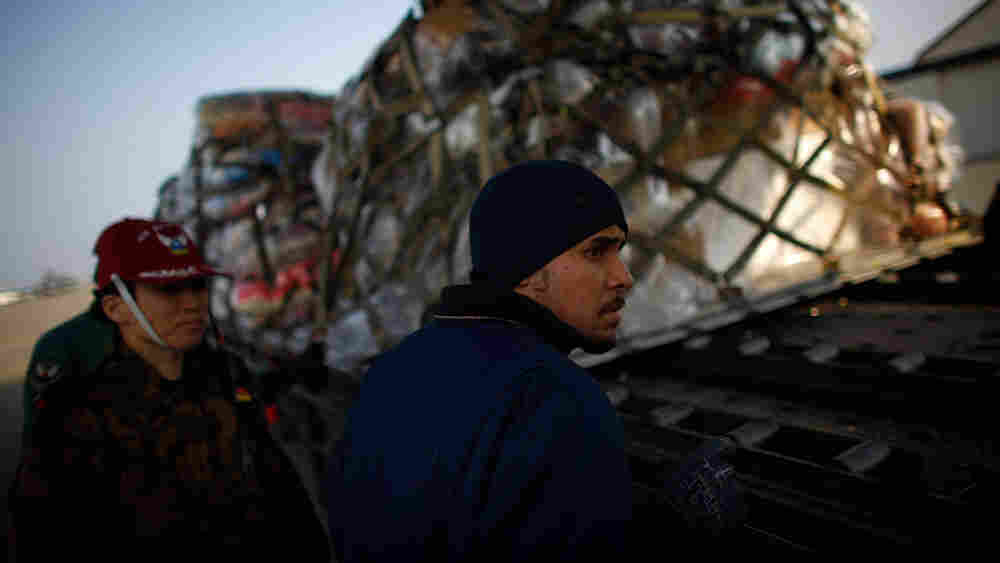 U.S. Air Force and Japanese Defense Force workers unload relief supplies at Misawa Air Base in Japan on Saturday. Both the Air Force and the Navy are using the base to move crucial materials to the affected areas of the tsunami and earthquake zones on the northeast coast of Japan's main island. David Gilkey/NPR hide caption

As Japan struggles to deal with its crippled nuclear reactors and clean-up from the devastating March 11 earthquake and tsunami, the U.S. military has deployed thousands of troops in the region to help. The U.S. Army, Navy, Air Force and Marines all have a major presence in the country. American military bases throughout Japan are being used as staging areas for disaster response teams.

Meanwhile, the Defense Department has authorized the voluntary departure of any U.S. military dependents from the main island of Japan. 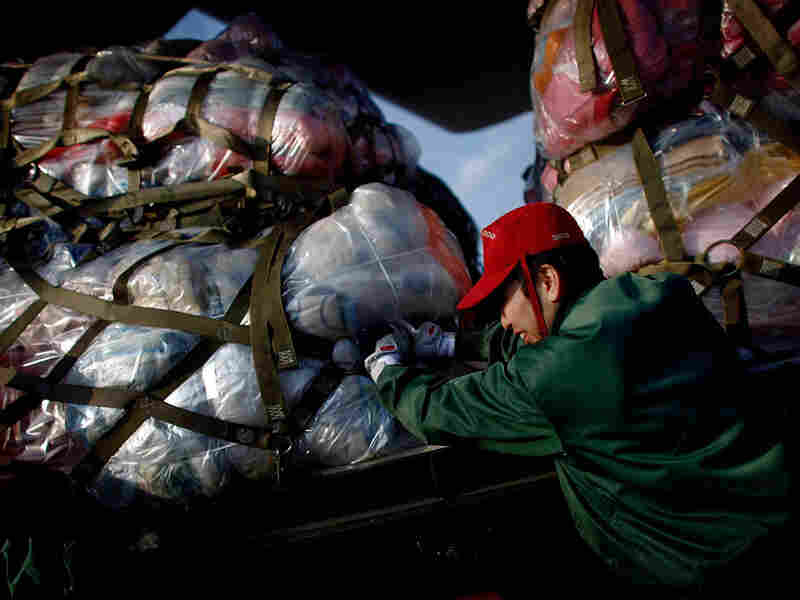 Workers unload relief supplies at Misawa Air Base in Japan on Saturday. Their work has been complicated by the loss of electricity to the base. They've been running on generators for days. David Gilkey/NPR hide caption

Naval reservist Mike Wendelon of Cambridge, Mass., offloaded 4 tons of blankets and 2 tons of food from a Navy cargo plane on Saturday.

"This will be our first trip today, but we'll be back for another round before the sunsets," he says.

The blankets and food were collected by residents on the U.S. Marine Corps Air base at Iwakuni on the southern tip of the main island. From here, they will be shuttled into the coastal areas where hundreds of thousands of people lost their homes in the disaster.

Misawa has been a staging area for American, French and British search-and-rescue teams. Air Force Col. Mike Rothstein, the commander of the base, says food, water and other supplies are coming through Misawa.

"There are Japanese and U.S. helicopters that can help do some of that short-haul lift to the places that need it. So we are going to continue to operate and continue to support the Japanese," he said.

The U.S. military is also doing aerial surveillance of the damaged nuclear power plants. The aircraft carrier USS Ronald Reagan and the destroyer USS Preble, both off the northeast coast, are helping to move relief supplies into some the hardest hit areas.

Service members have been cleaning up debris from the tsunami in several coastal towns.

At the Misawa Air Base, their work has been complicated by the loss of electricity to the base. They've been running on generators for days and trying to ration their limited supply of power.

Getting Back To A 'Safe Haven'

Misawa, as well as every other U.S. base on the main island of Japan, also faces another challenge. Last week, the Defense Department authorized a voluntary departure of all dependents from Honshu, Japan's main island. This order potentially could lead to thousands of dependents being flown back to the U.S. There are more than 40,000 dependents of American military personnel stationed in Japan, although not all are on Honshu.

At a ballroom in the enlisted club at Misawa, hundreds of people — many of them children — are being processed to get on flights back to what's being called the "safe haven" of the U.S. mainland.

Air Force Maj. Tom Esser, from Covington, La., is helping to coordinate the exodus of military family members from this base.

"This is an evolving process as people make their decision — but we've got relatively 1,600 who've said, 'I would like to leave,' " Esser said. 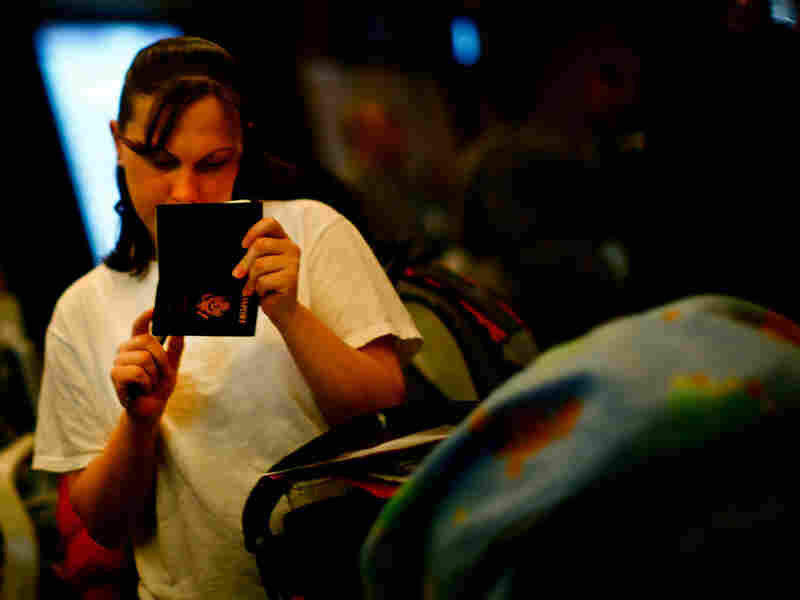 Jennifer Sentillion checks her passport while waiting in line with her newborn son, Leland, to sign up for a flight home to the U.S. at Misawa Air Base in northeast Japan on Saturday. David Gilkey/NPR hide caption

Jennifer Sentillion is waiting with her newborn baby, Leland, to get processed for departure. Her husband is deployed to the Middle East. Sentillion gave birth to their first son on March 8; three days later, the quake pounded this area.

"Yeah, it was the day after I brought him home from the hospital," she says. "A little scary, a little overwhelming, but we are OK."

Sentillion says she's not extremely worried about the crippled nuclear reactors because they're fairly far away from here, but she says it's been hard being on base because of the power cuts. The area has also already run out of baby formula, so she'd like to leave at least temporarily.

"I'm gonna go stay with my dad and visit my husband's family, since they're all in the same area," she says. "It'll give them a chance to meet [Leland] and kind of give me a break, too, because a newborn, bringing him home, it's tough."

While many U.S. military dependents are pulling out, the commander of the base says the ongoing relief and the eventual recovery effort in northern Japan are going to dominate the work at this facility in the months to come.