Accessibility links
Yearning For Change, Haitians Head To The Polls The return of exiled former President Jean-Bertrand Aristide added a new layer of complexity to Sunday's presidential election. Though he remains wildly popular with Haiti's poor, many say that with all the country has struggled through recently, they're ready for something new. 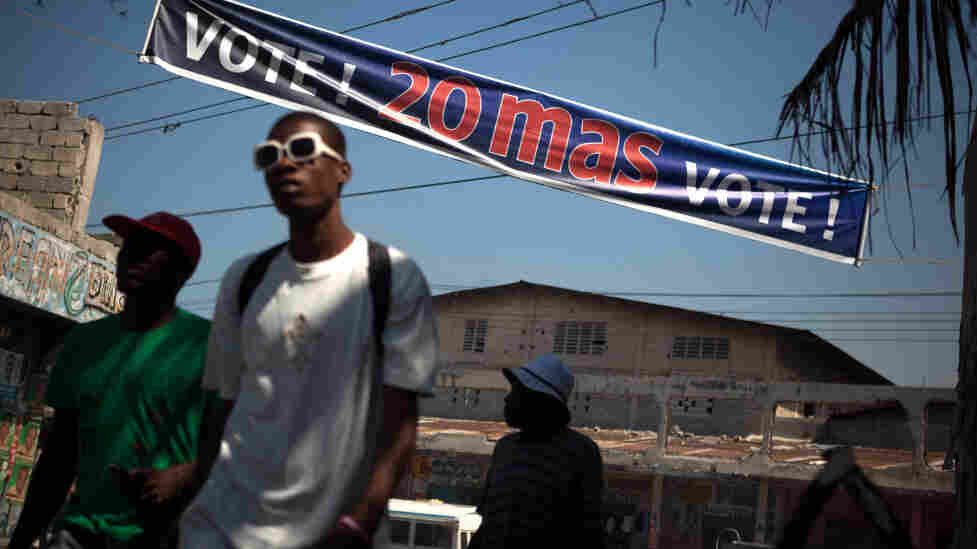 A banner in Haiti's Cite Soleil neighborhood encourages residents to vote Sunday in the second round of elections. Allison Shelley/Getty Images hide caption

It has been a long and contentious road to election day in Haiti, where voters are heading to the polls Sunday to choose a new president. The election has been postponed once because of allegations of fraud and voter intimidation in the first round of voting.

Further complicating matters was the raucous return of former President Jean Bertrand Aristide, who arrived in the Haitian capital Friday, after seven years in exile.

Aristide's return raised concerns that he would disrupt Sunday's election, but since arriving on Friday, he hasn't said much. In front of his residence in a Port-au-Prince suburb, all is quiet except for a few men scrubbing muddy footprints off the concrete wall surrounding the compound.

Gil Fitz-Basil says they're cleaning the marks left behind by the hundreds who scaled the wall Friday, trying to get a glimpse of the former president. The twice-elected Aristide is still wildly popular among Haiti's poor, and thousands turned out for his homecoming.

Fitz-Basil says he is so happy Aristide is back, he can't stop jumping up and down with joy.

The presidential candidates aren't so happy. Former first lady Mirlande Manigat and popular singer Michel Martelly are both ideological opposites of the populist leftist Aristide. But Manigat and Martelly have toned down their criticism of Aristide recently so as not to alienate his supporters.

Maxin Benoit says he wishes Aristide was on the ballot, but he plans to cast his vote for Martelly.

"We need a change in this country," he says. "With all the horrible things that have happened recently, we need someone new."

While Martelly may be a newcomer to politics, he's a well-known kompa music performer here. He easily masters the mellow meringue-style beat, but his pop-star persona is anything but soothing. He's admitted to smoking pot and using cocaine. On stage, he has dressed like a woman and mooned his audience.

For her part, the 70-year-old Manigat, a university professor, plays up the differences and Martelly's lack of presidential presence. She likes to point out that the 50-year-old singer doesn't even have a college degree.

In recent weeks, the candidates' rhetoric and jabs have heated up, which worries Colin Granderson, who heads an election observation team for the Organization of American States.

"I think about two weeks ago we were relatively confident," he says. "We are starting to have doubts now."

Granderson says election officials are not as organized as they need to be to pull off a more credible contest than what took place during the primary last November. Allegations of voter fraud, intimidation and ballot stuffing were widely reported. Granderson says that as late as Saturday, some poll workers were still getting trained.

"Too many things were left for the last moment," he says, "and things done at the last moment are done in a rush, and they are not going to be done as effectively and fully as they should have. And that could have a negative impact on the day."

But despite the problems, Granderson says he thinks voter participation will be high.

Even the return of Aristide may not affect the vote. He has remained holed up in his residence and has not made any endorsements in the race.

At the former president's charitable foundation, the youth choir practices. Everyone here says they're going to vote.

"If we want our country changed we are going to go that," says 23-year old Pierre Francois Davins. The youth of Haiti, he says, will vote for change.

They'll have to wait to find out who the winner will be. Election results won't be released until March 31.