Accessibility links
Chicago's Schools, Police Work To Stem Violence Nearly 700 children were hit by gunfire in Chicago last year — an average of almost two a day. Much of the violence is attributed to gangs in specific parts of town. That has the mayor, police and school officials looking for ways to control what some call an epidemic of youth violence. 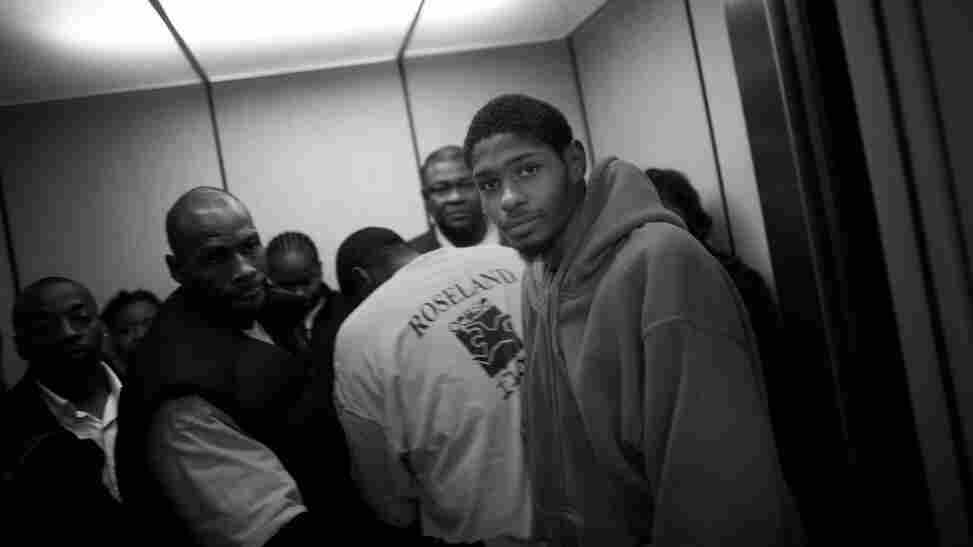 Marcus Spies was shot while taking out the garbage. He lives in Roseland, a tough south side neighborhood where gang fights claim lives and wound many. Spies says that one of the gangs wanted him to join up, but he declined. He believes they shot him in retaliation. David Gilkey/NPR hide caption

In Chicago, nearly 700 children were hit by gunfire last year — an average of almost two a day — and 66 of them died. That number is up over the previous year, even though the overall number of homicides in Chicago fell last year to a 45-year low.

Over the next week, NPR will examine what some call an epidemic of youth violence in Chicago and the city's new intensive efforts to try to reduce it, as other cities with serious or similar youth violence problems watch and take note. NPR's Cheryl Corley and David Schaper begin our coverage with this report:

The weather is turning in Chicago. The snow has melted, and kids are beginning to spend more time outdoors. In some Chicago neighborhoods, that's dangerous.

High school senior Marcus Spies knows that all too well.

"When I got shot, it was no pretty sight to feel like. All I felt, it was burning in my whole right ribs," he says. "If I didn't get to the hospital in time, I would have been paralyzed all my life. I'm just glad to be here."

We talked to Marcus at an anti-violence dinner. He lives in Roseland, a tough south side neighborhood where gang fights claim lives and wound many.

Spies says the gangs wanted him to join up.

"They were like, if you don't join a gang, we're going to have to jump on you. I'm like, 'Y'all doing some petty stuff, for jumping on people that don't want to get in a gang.' "

Marcus thinks one of the gangs made good on its warning last summer, shooting him in his own yard, when he was taking out the garbage.

"At first, I heard something fly past me," he says. "I was like, it wasn't nothing — so I kept on walking. The second time, it hit me."

Marcus lived to tell his story. Far too many teens don't. Last year, 70 children between the ages of 5 and 18 were murdered in Chicago. All but four were killed by gunshots — and at least half of the deaths were gang-related.

As Chicago's weather turns warm, community leaders and their allies are working to stop trouble before it starts.

CeaseFire is a public health initiative that uses former gang members to mediate street conflicts before they turn deadly.

Tio Hardiman, the Illinois director of CeaseFire, says it's important for community groups to get out and be visible this time of year.

"We can really reach a turning point in Chicago," he says, "if we can really decrease the number of shootings and homicides during the months of March and April, before we get into the hotter months."

Official crime statistics for last year show that in addition to the 66 school-age children killed by gunfire in Chicago, another 611 young people were shot and wounded.

Chicago's former superintendent of police, Jody Weis, who just stepped down this month, says the police recognize that the causes of youth violence are complex.

"You know a lot of this, I think, starts at the home," he says. "And we're not step-parents. We're not substitute teachers; we're the police." 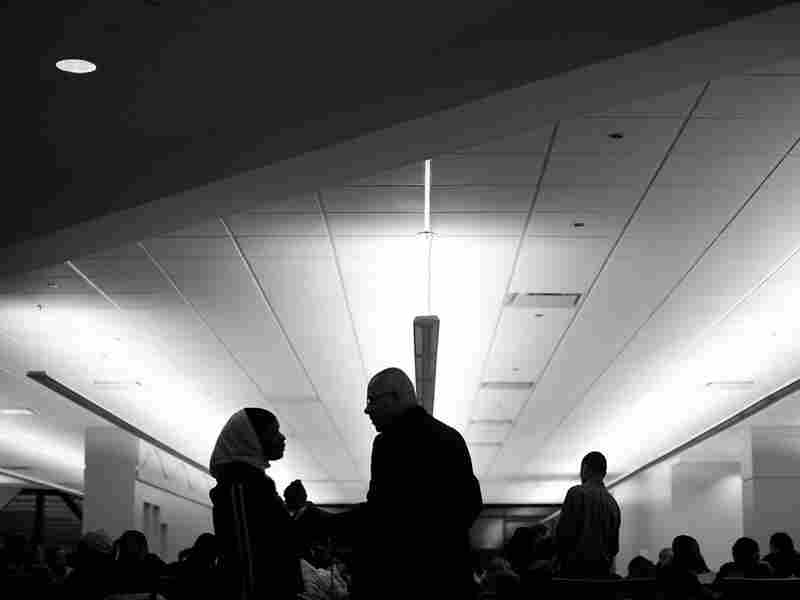 A CeaseFire meeting on Chicago's south side. CeaseFire is a public health initiative that uses former gang members to mediate street conflicts before they turn deadly. David Gilkey/NPR hide caption 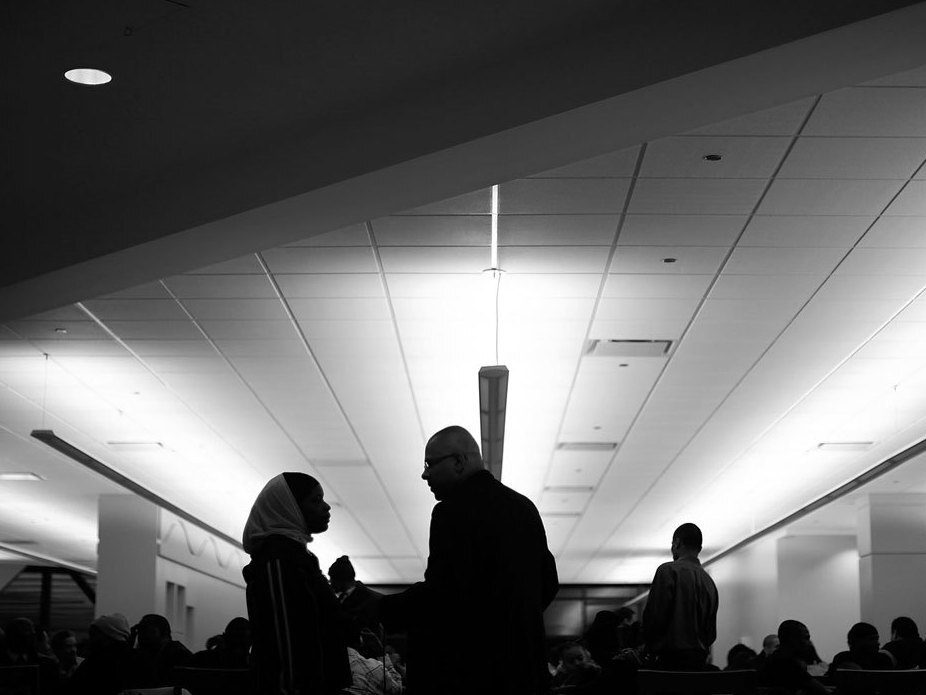 A CeaseFire meeting on Chicago's south side. CeaseFire is a public health initiative that uses former gang members to mediate street conflicts before they turn deadly.

The department is trying some new and different strategies to tackle youth violence.

For instance, police commanders and school principals now use an instant communications system to discuss any troubles brewing in schools that could spill out onto the streets.

And special police teams work to ward off any gang-related fights and shootings.

Still, Chicago's image as an incredibly violent place for teens got worse in the fall of 2009, when cellphone video of the beating death of high school student Derrion Albert went viral and made international news.

Despite such notorious incidents, Weis says the reality is that there's no citywide rampage of violence.

That's exactly the point, says the city's new mayor-elect, Rahm Emanuel. He calls the violence in some sections of the city unacceptable, and has promised to hire a thousand new police officers as part of his crime policy.

Emanuel says he was particularly struck during his recent campaign by a student who told him she was driven to school because that was the only safe way to get there.

"My goal for the four years, and the measurement of my progress," he says, "will be whether that child can be thinking of their studies, and not their safety."

None of the homicides involving young people in Chicago in the past several years occurred in schools, or even on school grounds.

"We live in a city, and in communities, where we have students who are exposed to extraordinary risks in their lives," Mazany says. "We play a particular role in where we see that we can help to assure the safety and well-being of a young person. That's important."

Chicago Public Schools are now in the second year of a two-year anti-violence initiative in high schools, designed to keep as many kids as possible safe.

It's funded with close to $50 million in federal stimulus funds.

One initiative, called "safe passage," works with the police, the Chicago Transit Authority, and local community groups to try to ensure students can get safely to and from school through various neighborhoods and gang turf.

School officials also use data about the kids who have been shot in the past to look for traits they have in common, trying to identify the teenagers most at risk of becoming the next shooting victims.

The Chicago school system is spending close to $20 million on advocates and mentors to intervene in the lives of the few hundred kids it predicts have more than a 10 percent chance of being shot.

At Chicago's Marshall High School, Albert Stinson walks through the lunchroom, greeting a few of the boys he mentors there. He meets with them almost every day, in and out of school, teaching them how to cope and react without getting violent.

He's also there to step in and talk the students down when they do lose their cool, to help them handle their anger.

Stinson grew up under the same conditions, in the same neighborhood, and even attended the same school as the tough kids he's working with.

"My whole thing is, I want them to be accountable," Stinson says. "And that's the biggest thing I'm working with, like I say with all my boys, it's finding a way where they can start taking control of their life right now — today."

We'll hear more from Stinson and the students he mentors later this week. At this school and others, the goal is to create a culture of calm to counter a culture of violence.

The schools try to train students in conflict resolution and leadership, and provide extra social services and programs to keep kids engaged after school.

Looking For Results, And The Next Step

The anti-violence initiatives were announced at the start of the last school year — in the fall of 2009 — but the multimillion-dollar programs were slow to get off the ground.

Chicago schools only implemented part of the intensive mentoring program a year ago, and it has taken almost a full year to expand it and implement the rest.

Much of this focus on high school students is justifiable, says Deborah Gorman Smith of the Center for Youth Violence Prevention at the University of Illinois Chicago.

But she says there's almost too much talk about helping kids already in trouble.

"Very little discussion has been about, how do we stop kids from getting there in the first place?" she says. "And almost none of the programs and policies have focused on that."

Chicago School officials wouldn't disagree. But with precious few resources and federal stimulus funds soon running out, they have their hands full trying to answer a question: Is any of this working, and saving lives?