Accessibility links
Nation Exults: 'This Is A New Egypt!' Egyptian President Hosni Mubarak resigned and handed control to the military on Friday after 30 years in office. The announcement by Vice President Omar Suleiman electrified hundreds of thousands of protesters in Cairo's Tahrir Square, who hugged one another and chanted, "The people have brought down the regime!"

Millions of Egyptians celebrated the country's first transition of power in three decades on Friday, cheering, waving flags and setting off fireworks after President Hosni Mubarak buckled to protesters' demands and stepped down.

Vice President Omar Suleiman announced the news on state television and said control would be turned over to the military.

"In these difficult circumstances that the country is passing through, President Hosni Mubarak has decided to leave the position of the presidency," Suleiman said in brief remarks just after nightfall. "He has commissioned the armed forces council to direct the issues of the state."

In a statement Friday night, Egypt's top military council said Mubarak had "acted in the interests of the nation."

The moment the announcement was made, Cairo's Tahrir Square erupted in celebration. People ran through the streets hugging each other and shouting, "Egypt is free!" and "The people have brought down the regime!" Fireworks and the sounds of car horns and celebratory gunfire filled the air around the city of 18 million.

"It's a national celebration!" protester Yassmine El-Sayed Hany said. "We are very lucky to be in the generation to witness this historical moment."

Still, computer science teacher Ahmed Attal, 29, added a note of caution to the festivities. He said Mubarak's leaving doesn't necessarily mean the structure of his repressive regime is gone.

Transfer Of Power In Egypt

"It's not over yet," he said. "This one step. Mubarak just one step — because we have many, many Mubarak in Egypt. These people helped Mubarak destroy Egypt."

'I Could Never Have Imagined'

"It's the greatest day of my life," opposition leader Mohamed ElBaradei told NPR. "I could never have imagined that I would live long enough to see Egypt emancipated. It's an electrifying feeling."

Asked whether he was confident that Egypt was moving toward democracy, ElBaradei said, "I have assurances that the army will reach out to a wide spectrum of Egyptian society and we will have co-sharing of power with the Egyptian army for a transitional period.

"We always had confidence that the army would come in a crisis, and they have come at exactly the right moment," the Nobel Peace laureate said. He estimated that the transition period would last about a year, but others said it was too soon to tell.

ElBaradei said he believed that Egypt's emergency law, which gives police virtually unlimited powers of arrest, had been lifted. "I think it is. I was told — but it's not confirmed — that the [military's] first command would be to abolish the emergency law."

Ayman Nour, who finished second to Mubarak in a disputed 2005 presidential election, told Al-Jazeera television that the nation had "been born again."

"This is a new Egypt," the opposition leader said.

A spokesman for the Muslim Brotherhood, an Islamist group outlawed in Egypt, said that he welcomed "the fall of a tyrant" but that Mubarak's departure was only a first step. "I think all now are invited ... to launch a real dialogue about the future — the near future and the far future," the spokesman, Essam Al-Aryan, told NPR.

The ruling National Democratic Party also was dissolved Friday and the recently appointed general-secretary of the party, Hossam Badrawi, resigned.

"The formation of new parties in a new manner that reflects new thinking is better for society now at this stage," Badrawi told al-Hayat TV.

The NDP has been at the center of the political repression that has affected many Egyptians. "The announcement of the dissolution of this party will certainly give a boost to the morale of the protesters," NPR's Lourdes Garcia-Navarro reported from Cairo.

President Obama, speaking at the White House Friday afternoon, said Mubarak had "responded to the Egyptian people's hunger for change."

How The Last 24 Hours Played Out

"The idea that justice can be enforced through violence" had been disproved, he said.

"Many questions remain unanswered, but I am confident that Egyptians can find those answers, peacefully," Obama said, but added that "only genuine democracy will carry the day."

Mubarak and his family reportedly left Cairo on Friday for the Egyptian seaside resort of Sharm el-Sheikh as crowds of protesters swarmed across the capital and other major cities demanding his resignation.

His fall came 32 years to the day after the collapse of the shah's government in Iran in 1979.

Mubarak was thrust into power in 1981 in the chaotic aftermath of President Anwar Sadat's assassination by Islamist extremists. And he's ruled with a heavy hand for 30 years, making him the longest-serving Egyptian leader since the 19th century.

Mubarak resisted calls for reform even as public bitterness grew over corruption, deteriorating infrastructure and rampant poverty in a country where 40 percent live below or near the poverty line.

Seeking to cling to power, he addressed the nation Thursday night and said he would retain his title but transfer some of his authority to Suleiman. An explosion of protests Friday rejecting the move appeared to have pushed the military into forcing him out completely. Hundreds of thousands of people had marched throughout the day in cities across the country as soldiers stood by, besieging his palace in Cairo and Alexandria and the state TV building. A governor of a southern province was forced to flee to safety in the face of protests there.

Reports of the president's resignation came hours after the Egyptian military said it would support Mubarak's decision to remain in office through September elections.

The Armed Forces Supreme Council released a statement Friday endorsing the plan Mubarak unveiled Thursday night for constitutional changes. The council also guaranteed that Egypt's hated emergency law would be lifted "immediately after the end of the current circumstances" — a reference to the mass protests.

The military also called for public services to resume and urged "the return of normal life in order to safeguard the achievements of our glorious people."

But the message made no mention of any delegation of powers from Mubarak to Suleiman, who appears to have lost his position in the military takeover.

Fury, And Then Joy, Across Egypt

Friday's jubilation was in sharp contrast to the mood that permeated the country hours before Mubarak's resignation. 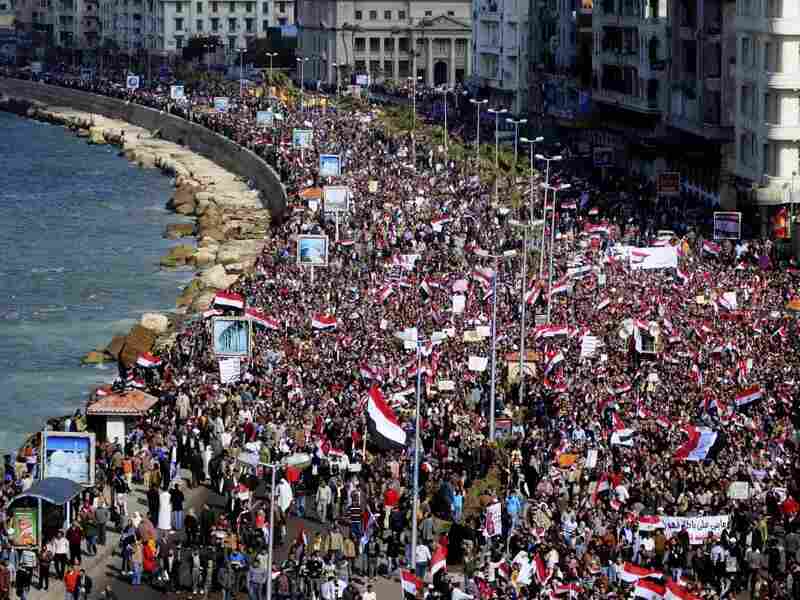 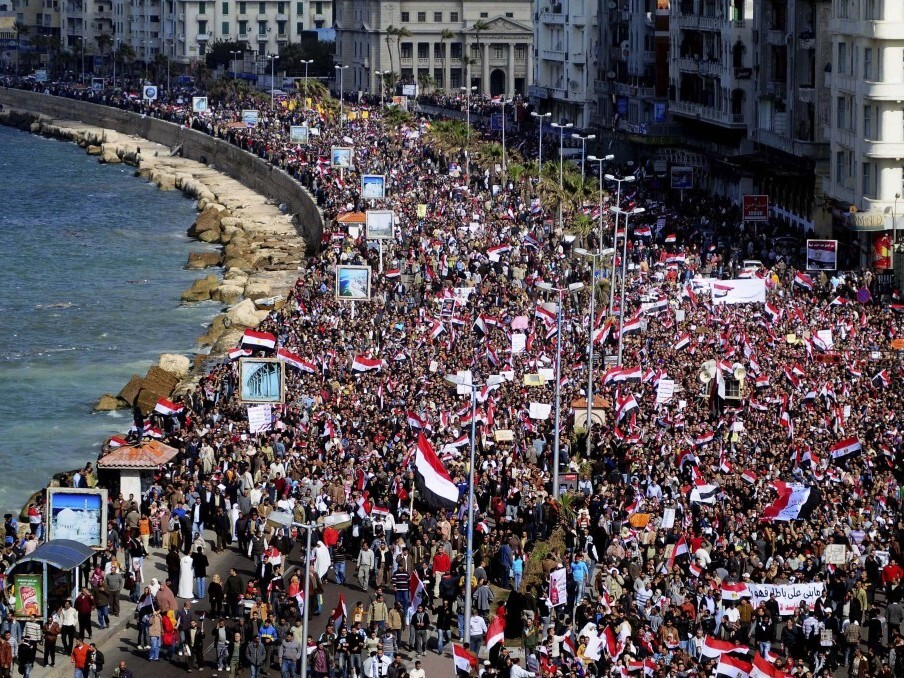 Mubarak's speech to the nation — in which he refused to step down and made the symbolic gesture of handing over some authority to Suleiman — only emboldened the protesters, energizing their call for a "march of millions" Friday.

About 2,500 demonstrators took their outrage to the gates of the presidential palace on Friday, and more than 10,000 tore apart military barricades in front of the State Television and Radio building. The palace was protected by four tanks and rolls of barbed wire, but soldiers did not prevent people from joining the rally and chanting anti-Mubarak slogans.

Outside the palace, the words "You will be tried" were written in chalk.

Others massed outside the Cabinet, Parliament and state TV headquarters several blocks away from Tahrir Square, the center of the mass rallies that began Jan. 25.

Egyptians Rejoice As Mubarak Steps Down

Across Cairo, Scenes Of Triumph As Mubarak Resigns

Hundreds of demonstrators formed a human barricade around the building that houses state TV and radio, checking IDs and turning away those who work there. Tanks and barbed wire also surrounded the building, but troops did not keep protesters away.

In Egypt's second-largest city, Alexandria, NPR's Corey Flintoff said "tens of thousands, perhaps hundreds of thousands" were peacefully marching along a main boulevard that snakes along the Mediterranean seaside. Many waved Egyptian flags or carried banners and hand-lettered signs.

"We understand, too, that a great many people have gone to Cairo to join the protests in Tahrir Square," Flintoff said.

Ahmed Hussein, an Alexandria businessman, said his import-export trade dried up during the 18-day uprising against Mubarak, but that the cost was worth it.

"I don't know what will happen," he said. "Something good for our country."

Egypt's ambassador to the United States, Sameh Shoukry, told NPR that he was optimistic that Egypt would see "a new dawn of development, of stability, of democracy, of well-being."

"This is certainly a defining moment in the history of Egypt," he said. "A small point in the very vast history of the contributions of Egypt to civilization, but a very major point in terms our future and the future development of our people."

NPR's Lourdes Garcia-Navarro, Soraya Sarhaddi Nelson and Eric Westervelt in Cairo; Corey Flintoff in Alexandria; and Deborah Amos in Riyadh, Saudi Arabia, contributed to this story, which contains material from The Associated Press