Accessibility links
Kitchen Window — Eating O' The Greens: Beyond Southern Side Dishes Although they're known as a slow-cooked, down-home side dish, greens aren't just for Southerners. Their flavors — from sweet to bitter to earthy — brighten soups, salads, omelets and more.

Eating O' The Greens: Beyond Southern Side Dishes

Eating O' The Greens: Beyond Southern Side Dishes 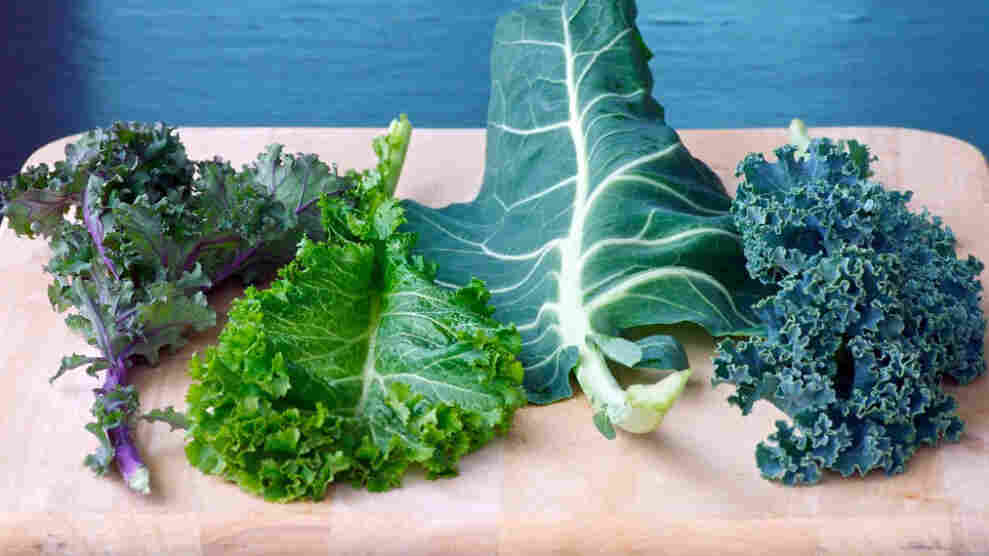 Although they're known for being a stellar side dish, greens can be added to soups and stews, chopped into salads and omelets and added to rice and pasta dishes. From left: Red kale, mustard greens, collards and kale. Susan Russo for NPR hide caption

The first weekend after my husband and I moved from Rhode Island to North Carolina, we were invited by neighbors to a potluck dinner. We were thrilled — we desperately wanted to try some real home-cooked Southern food.

When we arrived we scanned the offerings on the table. Much to our delight, we identified bowls of colorful succotash and saucy black-eyed peas and trays of freshly baked biscuits and crispy fried green tomatoes. To the side were tall pitchers of sweet and "unsweet" tea to wash it all down.

Greens? I thought. More like browns. I was so disappointed. How could these be the iconic Southern greens I had heard so much about? Intrepidly, we tried them and discovered a meaty, earthy, salty flavor that these Yankees had never experienced before.

There were a few dishes, however, that we couldn't identify. Crispy, golden nuggets that looked to New Englanders like clam cakes: hush puppies. Lumpy, pink dip that we thought was a strange type of ambrosia, that famous Southern coconut and fruit concoction, was actually savory pimento cheese spread. There was also a big bowl of mushy, brownish-green stuff that we believed was a vegetable, but weren't sure. I asked the woman next to me, "What's in the bowl, there?"

"Why, they're greens, of course," she said, smiling widely.

"Yes, honey. Collards. Greens," she said, this time repeating "greens" slowly and clearly, as if I were hard of hearing.

Greens? I thought. More like browns. I was so disappointed. How could these be the iconic Southern greens I had heard so much about? Intrepidly, we tried them and discovered a meaty, earthy, salty flavor that these Yankees had never experienced before.

The next weekend I went to the Raleigh farmers market. Everywhere I looked were bunches of attractive deep green collards, with leaves the size of elephant ears. It was January, the first month of peak season for collards and their leafy brethren, including kale, mustard greens and turnip greens that would last through April.

I selected two rich, green, prehistorically huge bunches of collards, then asked every woman I heard with a deep Southern accent how I should cook them. Here's what they said: Collards had to be cooked slowly in water or chicken broth with a smoked meat such as ham hock or pork shoulder. Some advocated adding bacon as well. Butter and onions were optional. Vinegar was requisite as were several dashes of hot sauce and generous shakes of salt and pepper.

As for cooking time, they all concurred: "A looong time," which translated to anywhere from 45 minutes to two hours. Assuming the brown bowl from the potluck was a product of two hours of cooking, I opted for 45 minutes. The result was a tender, earthy, still-green vegetable infused with salty, meaty smokiness.

Over time I came to appreciate all of the popular Southern greens, including kale, mustard greens and turnip greens. I sauteed them with olive oil and lemon, chopped them up and added them to bean soups and even tossed them into pastas and frittatas, a place they weren't accustomed to be in the South. Before long, I found myself saying things like, "Mmmm, I'm gonna make a 'mess o' greens' this Sunday."

Classic slow-cooked Southern-style greens originated in the South during slavery. African slaves brought to America had to feed their families from precious few foods. Because greens such as collards grew abundantly, they often used them as the basis for one-pot meals. To make the greens more flavorful and nourishing, they added meats such as pig's feet or ham hocks — discarded animal parts their owners wouldn't eat.

After a couple of hours of cooking, the greens would simmer in a meat-infused savory broth at the bottom of the pot known as pot "likker," as in "liquor." This precious juice was spooned atop the greens and sopped up with hunks of corn cakes made from ground corn. Today this beloved tradition is carried on with cornbread and hoe cakes.

Although greens now are enjoyed across the United States, their culinary home still resides in the South, where you can find them everywhere from upscale hotels to mom-and-pop diners. No holiday or Sunday supper is complete without them.

When selecting greens, look for firm, unblemished, richly colored, dark green leaves with intact stalks. Avoid dry, shriveled or yellowed greens. To store greens, wrap unwashed in a paper towel and place inside a plastic bag, where they should keep for five to six days.

Wash greens thoroughly in a large bowl of warm water a couple of times ensuring that all dirt is loosened and washed away. Pat dry. Trim off the stems. For tougher collards and kale, it's a good idea to remove the thick center stem that runs through each leaf. Simply fold the leaf in half lengthwise and cut off the stem. Then stack all the leaves, roll them up and slice crosswise into 1-inch-thick strips.

Since collards, kale, mustard greens and turnip greens are all descendants of the wild cabbage, they share an unmistakable sulfurous smell. Whereas boiling and steaming produce the strongest odors, sauteeing and braising produce the least.

If you're going to saute greens, you may want to parboil and "shock" them first. Boil the greens for two minutes. Drain and plunge into a bowl of ice water for three to five minutes, then drain and squeeze to release excess water. This helps maintain the greens' vivid color, reduce bitterness and make them more tender.

When it comes to flavor, all these greens are deliciously different. Collards have the earthiest, grassiest flavor, while kale, especially red kale, is sweet like spinach. Turnip and mustard greens in contrast have a distinctively bitter flavor. To balance the bitterness of these greens, do not add sugar, which can create an unpleasant flavor. Rather, pair them with salty, sweet or acidic ingredients such as bacon, honey or lemon that naturally reduce bitterness and enhance flavor.

Although they're known for being a stellar side dish, greens can be added to soups and stews, chopped into salads and omelets and added to rice and pasta dishes. They make healthy pizza, sandwich, crostini and polenta toppings as well. For a healthy snack, you can make trendy baked kale chips with sea salt.

Although I no longer live in North Carolina, greens and I have a close relationship, especially at this time of year. I still love them sauteed with bacon and served alongside slabs of homemade buttered corn bread, but since I live in California, I've tested our relationship a bit: I drink shocking green smoothies of pureed raw greens, bananas and fruit juice for breakfast, eat healthy chopped bold green salads for lunch and crispy kale chips with hummus for snacks. As for pimento cheese, well, I'm still working on that.

Elevate average bacon and eggs to something special by adding sauteed greens and piquant hot sauce. Tender greens such as kale and mustard greens are best for sauteeing; sweeter Swiss chard and beet greens are delicious alternatives. For a Southern-style breakfast, pair this scramble with a hot-from-the-oven biscuit and a strong mug of coffee. 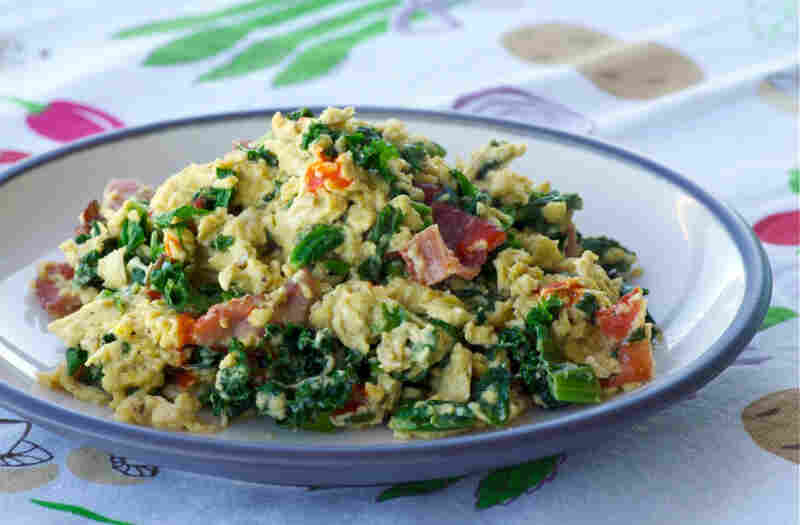 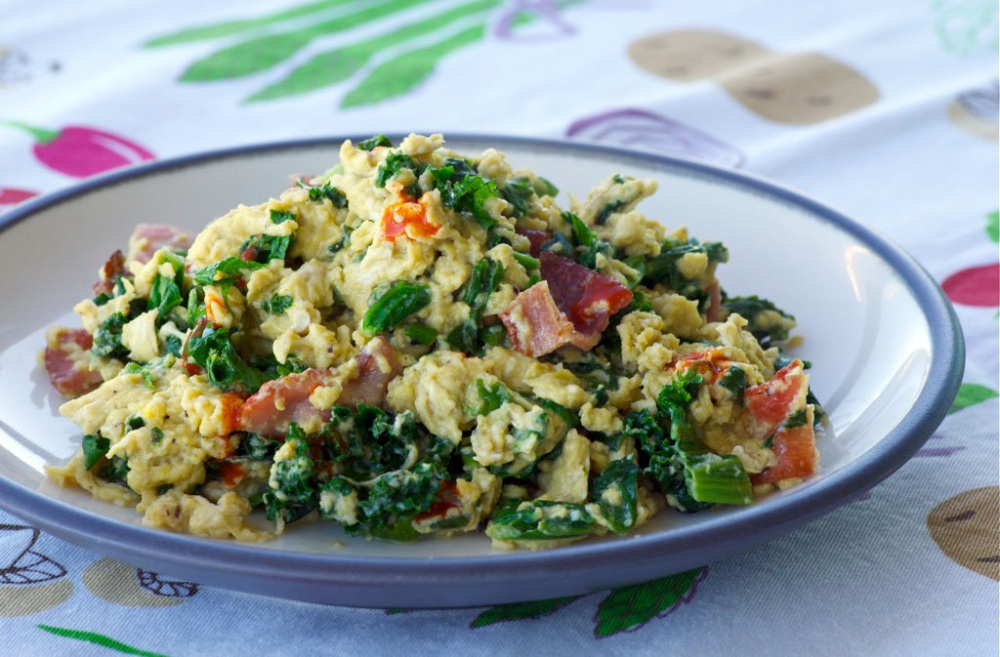 Meanwhile, whisk eggs and black pepper in a small bowl.

Add the 1 tablespoon of rendered bacon fat into a large skillet over medium-high heat. Add onions and saute 1 minute. Add greens and saute 3 to 4 minutes, until wilted. Pour the eggs into the skillet and, using a spatula, gently push the eggs from side to side as they cook. Cook for 3 to 4 minutes or until set and no longer runny. Stir in the bacon, and add a few shakes of hot sauce. Serve immediately, and keep the hot sauce bottle on the table.

Raw greens make a pleasingly assertive salad. They pair well with sweet ingredients such as sliced apples and oranges and chopped raisins and dates. As for the dressing, try something that is both sweet and acidic such as a maple syrup or lemon-honey vinaigrette. 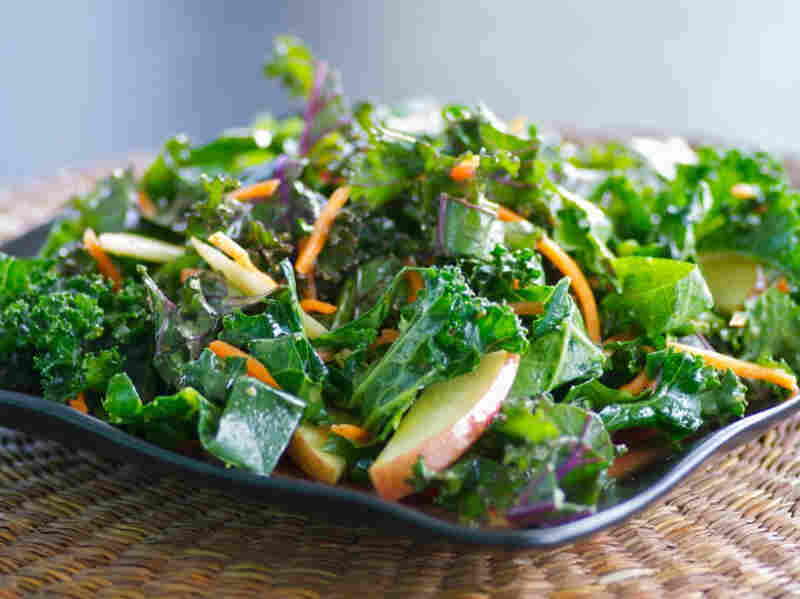 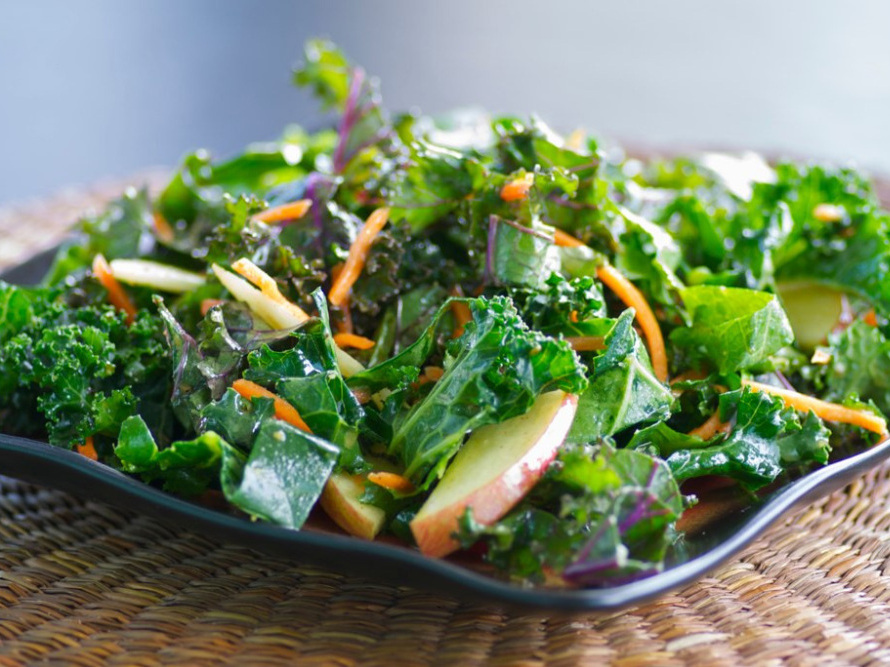 1 sweet, crisp apple, thinly sliced, with skins on, such as Fuji or Honeycrisp, sprinkled with lemon juice

In a large bowl, toss together salad ingredients.

In a small bowl, whisk vinaigrette ingredients. Microwave on high for 45 to 60 seconds. Pour over salad and toss well. Let sit for 20 to 30 minutes before serving so the greens soften and become infused with the vinaigrette.

This healthy Indian-inspired red lentil soup is enticingly aromatic and flavorful. I prefer sweeter red kale, but any type will do. You can also make this soup with Swiss chard or collards. 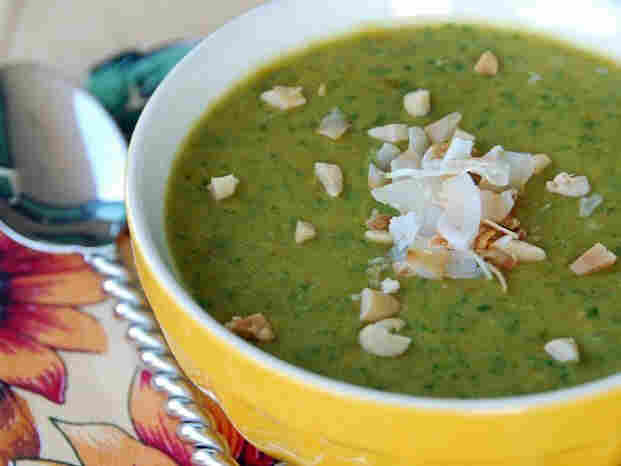 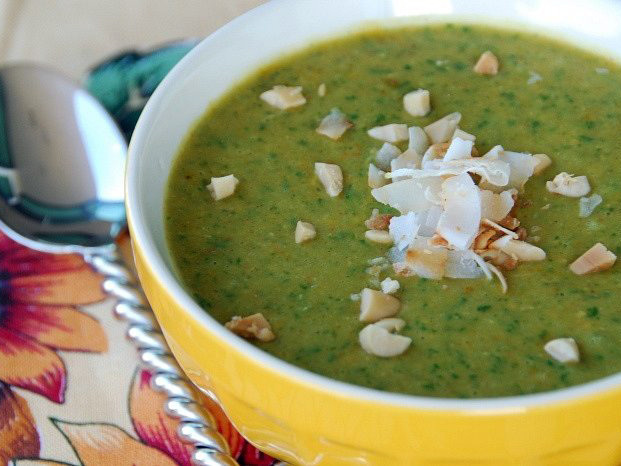 Several shakes of salt, to taste

In a medium saucepan over medium heat, warm olive oil. Add onion, carrots and celery. Saute until golden, 5 to 7 minutes. Meanwhile, bring a large saucepan of water to a boil. Add kale and boil for 2 to 3 minutes, then drain. (This will make it more tender). Add drained kale, lentils, chickpeas and broth to the carrot mixture; bring to a boil. Cover, reduce heat to low and simmer 12 to 15 minutes or until lentils are tender.

Let soup cool before pureeing. Pour half of the lentil mixture into a blender and puree. Pour pureed lentil mixture into a bowl, and repeat process with the remaining soup. Once the soup is blended, return to the pan. Add coconut milk, spices, ginger and salt. Stir well. Cover and simmer for 10 minutes or until thoroughly heated through. Remove from heat, and season to taste with salt. Ladle soup into bowls and garnish with toasted coconut and peanuts.

This traditional method of cooking greens uses ham hock, a cut of meat from the hog's lower leg, which is typically smoked or cured, to flavor the greens. It's available at butcher shops as well as most major supermarkets. 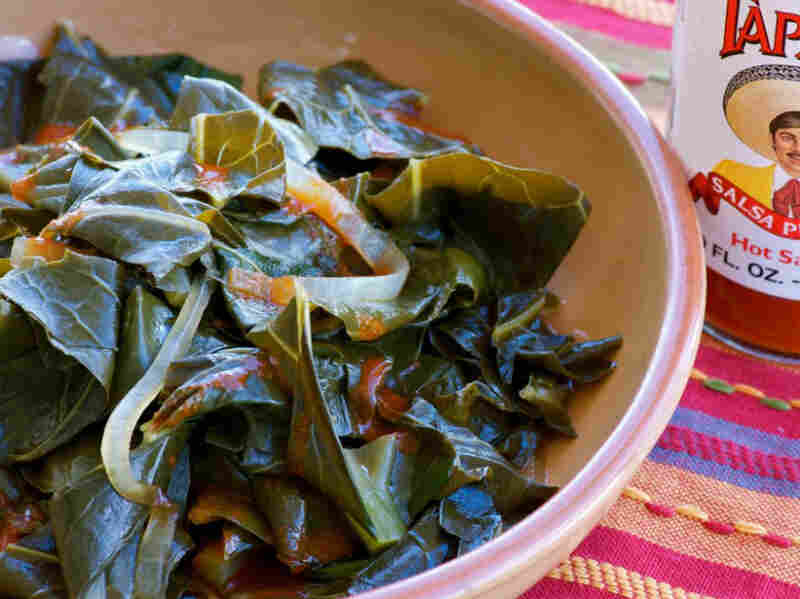 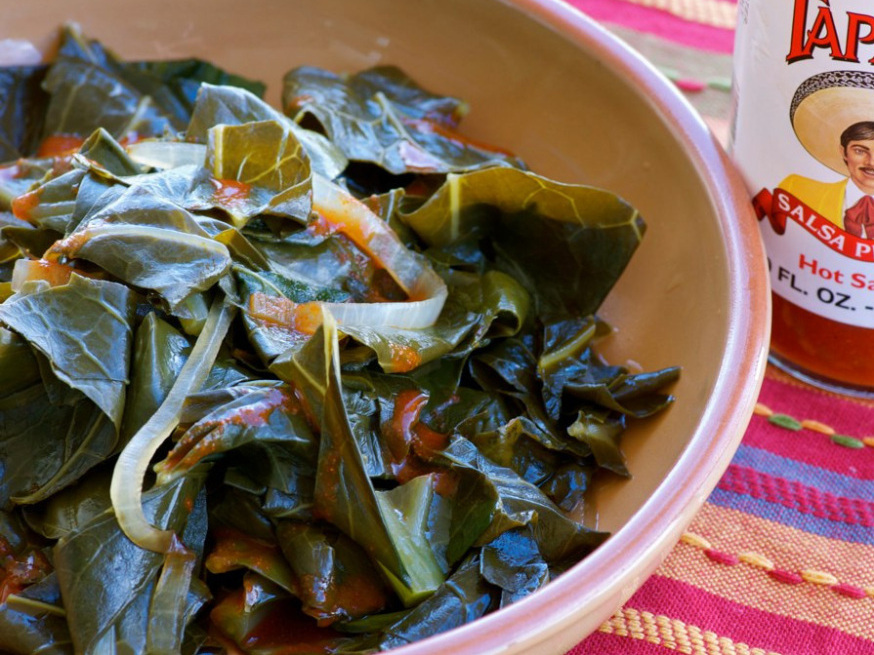 In a Dutch oven or other large, deep pot over medium heat, warm oil. Add onions and ham hock, and saute 8 to 10 minutes, stirring a few times, until onions are browned and wilted. Add collards, broth, vinegar, salt and black pepper and a few dashes of hot sauce. Stir well. Cover and bring to a low rolling boil. Partially cover and simmer for 35 to 45 minutes, or until the collards are soft and pale green. If you like them really soft, then cook them longer, until desired consistency is reached. Taste them, and season with salt and black pepper, as desired. Ladle some of the liquid over the collards before serving. And keep the hot sauce bottle on the table.