Accessibility links
'Big Love's Creators Deconstruct The Show's Finale Mark Olsen and Will Scheffer, who wrote and produced the HBO drama, explain the show's surprise ending — and why it's going to be hard for them to let their fictive polygamous family go after five seasons. (Warning: major spoilers) 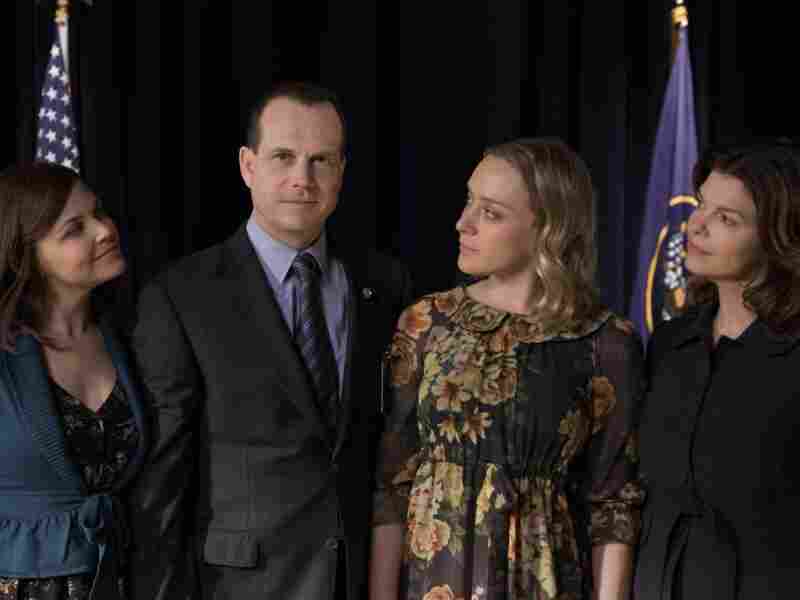 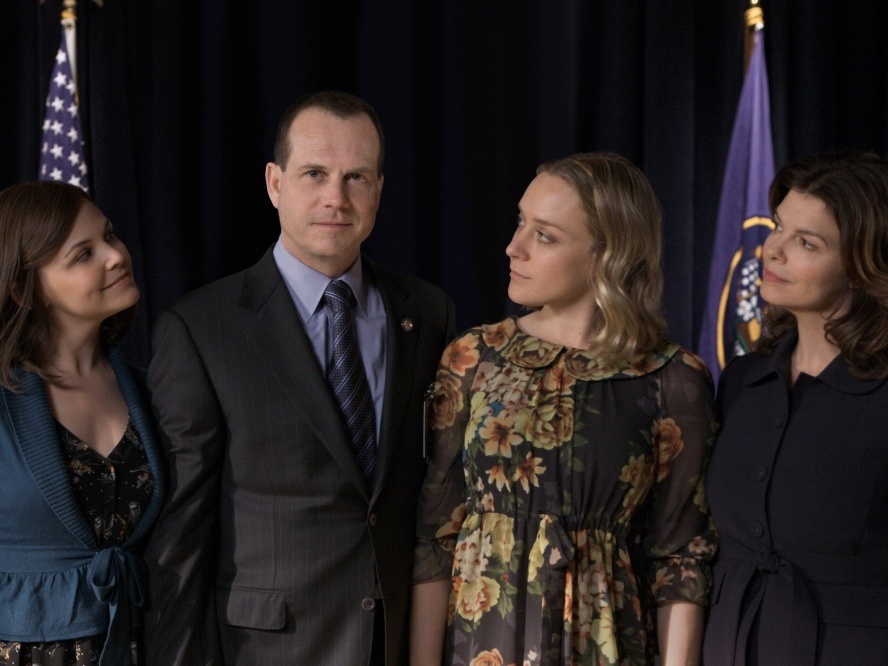 There are many spoilers ahead in this piece, and by spoilers, we mean this: If you want to be surprised by the final few episodes of Big Love, you should not read or listen to this piece until you finish the season.

For five seasons, HBO's Big Love has chronicled the lives of polygamist Bill Henrickson, played by Bill Paxton, and his three wives, Nicki, Barb and Margie, played respectively by Chloe Sevigny, Jeanne Tripplehorn and Ginnifer Goodwin. Last night, in the series finale, their story came to a dramatic — and surprising — close.

On today's Fresh Air, producers Mark Olsen and Will Scheffer, who created the series, talk candidly about the show's fifth and final season, and explain their rationale for the ending.

In the final episode, family patriarch Bill — who has already weathered extortion plots, an affair, an exile and an election — is shot and killed by a crazed neighbor. It's an unexpected plot twist, says Olsen, and one that was designed to have Bill leave the show as a hero.

"We wanted to give him a Gary Cooper exit from the show, but it went much deeper than that," he says. "We didn't want Bill to go out a loser or a failure or an unrepentant fundamentalist. And we wanted to find that thing that would render his life's existence the most successful. We felt [that] the greatest testimony to Bill would be that he had created a family that endured."

Surely enough, after Bill's death, his three wives — who'd slowly become more independent as the season progressed — decide to stay together. The closeness of the three widows, says Scheffer, was something Big Love's writers really wanted to highlight.

"The big secret of the show is that it's always been a feminist show," he says. "And even though it was dramatizing this very patriarchal system in some ways, the opportunities that women found — particularly in this very abusive system — to support each other was what drew us to the material in the first place, and gave us reason to want to explore it. ... We felt that there were opportunities for women to find support in one another."

Mark Olsen (left) and Will Scheffer say they're now going through withdrawal symptoms after the end of their HBO drama Big Love. "I didn't know how hard it was going to be to wrap it up," says Scheffer. "I was crying nonstop." Courtesy Mark Olsen and Will Scheffer hide caption

Mark Olsen (left) and Will Scheffer say they're now going through withdrawal symptoms after the end of their HBO drama Big Love. "I didn't know how hard it was going to be to wrap it up," says Scheffer. "I was crying nonstop."

Courtesy Mark Olsen and Will Scheffer

Olsen and Scheffer, who've been a couple 20 years, hit upon the idea of exploring the dynamics of a polygamous family shortly after the second inauguration of President George W. Bush. They say they were offended by campaign-season rhetoric about what makes a family and wanted to show that any family can embody "the idea of family values." That's partially why their fictional family continued to remain together, in spite of all of the drama going on around them.

"Every time there's a whiff of discord in the family, [people think] 'they're going to bail. This one's going to bail,' " Olsen says. "And Will and I have never looked at it like that. We've never played the 'who's going to leave the marriage' game, because I think we have a firm belief that you stick it out — that marriage is worth sticking out."

It's a philosophy that guides the two men in their own marriage, Scheffer says, particularly now that they've created a show — and worked together every single day.

"It's been good for us," he says. "I think it's forged us. I don't think we'd be the couple we are had we not had this experience together."

"It's not for the faint of heart," chimes in Olsen. "You better have your ducks in a row before you enter into it."

On the sanctity of marriage

Olsen: "There's a family here. There's a relationship here. There's love beneath the acrimony. There's certainly connection. And there's certainly identity. The hardest thing in the world is to forge that independence in a marriage — not to leave it and find it on the other side of it — but to try and find that in union and in marriage."

Scheffer: "For us, the show has been about staking out a marriage. And we've thrown everything at this family, and certainly a person's independence and personhood is one of the most fundamental rights and fundamental values in life. I think that there's been this shift in American culture, where there's this idea where you can't have that unless you separate or divorce or go off on your own. And for us — we've been together for 20 years — we struggle with those issues. But there is something about staying and forging your personality in that caldron of relationship that to us has great value. And it's something that's been lost of the easy come-and-go of American culture and American reality television."

On the changes in the Henrickson family

Olsen: "I don't think we ever want to be considered poster boys for the [idea] that if you're born into an abusive relationship, you should endure and there's value in that — because I don't think that's really what the show is. But we have been dramatizing the evolution and change in a fundamentalist, patriarchal family from Year 1 to Year 5. ... And we've been watching them — all of them — struggle with their roles and the relationship of power as Bill, as a patriarch, does hold the cards. But there's growth in the guy, and that's what we're looking at — the growth in that family."

Scheffer: "We were in the room when Bill read the script. ... Bill wasn't happy."

Olsen: "Initially, we should say. Initially, Bill had trouble that his character was going to die. It's not how he envisioned the end of his character's journey nor the end of the series. And he just had a big problem with it — I think he had a vested relationship with the character of Bill Henrickson, and he feels, rightfully so, that he has husbanded that character for five years, and it hurt him to know that that character was going to die. We explained what we were going for, and he got it. But it took about a week or two for Bill to come around and see it differently."