It's officially spring, and people are hitting the farmers markets, looking for fresh, local greens. That can be a challenge in many parts of the country. But some farmers have mastered the unusual art of growing greens straight through the winter.

At the Dupont Circle FreshFarm Market in Washington, D.C., people line up in the rain on a Sunday morning, standing in a line 10 deep, just to buy mustard greens, arugula and kale.

"We've come out of the winter doldrums," says one customer, Guilia Adelfio of Chevy Chase, Md. "We're into salad mode."

Farmer Zachariah Lester, who is selling at the market, has salad greens. But he also has a profusion of kale: Scottish curly kale, red Russian kale and dark-leaved toscano. There's spicy Piso mustard; a mellow Italian chard called Barese; and a bitter chicory mix with radicchio, endive, escarole and Rossa di Verona.

These greens are not only beautiful; they're among the most healthful foods out there. "They have such a fabulous nutritional profile," says Joan Salge Blake, a clinical associate professor of nutrition at Boston University.

Aside from the obvious vitamins, Blake says, "leafy greens are full of nutrients Americans are falling short of, like calcium, potassium and fiber." Locally grown greens are likely to be more nutritious, she says, because vitamins deteriorate the longer vegetables are shipped and stored. And fresher greens are tastier, making it a pleasure for people to eat their veggies.

But most people live in places where nothing grows in winter.

Lester and his wife, Georgia O'Neal, have a solution. They grow their greens at Tree and Leaf Farm in Unionville, Va., just 80 miles south of Washington. It's freezing cold there in winter. But they use winter farming methods rarely seen in the United States to produce fresh leafy greens all winter.

In the late 19th century, market farms just outside cities in Europe perfected year-round food production. Lester cites as influences the 19th-century French maraicheres who farmed on the outskirts of Paris, as well as contemporary winter growers Anna Edey of Vineyard Haven, Mass., and Eliot Coleman of Harborside, Maine. 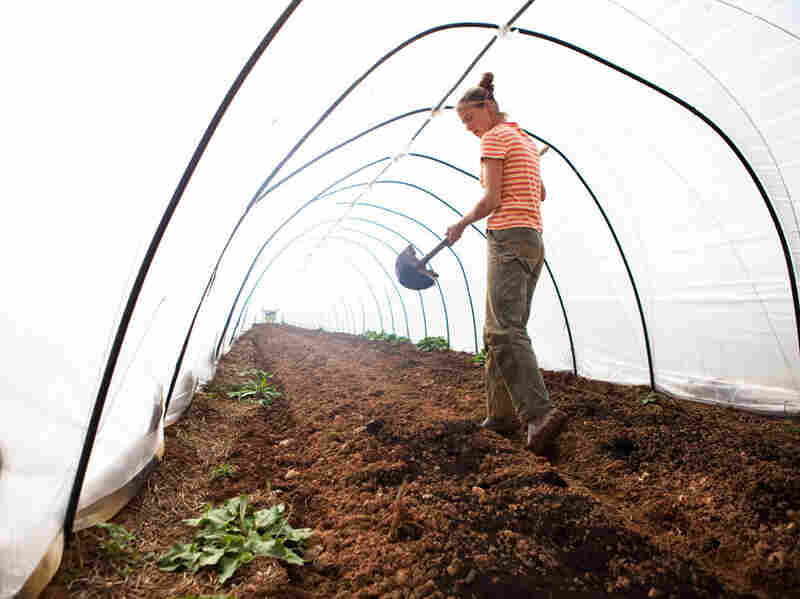 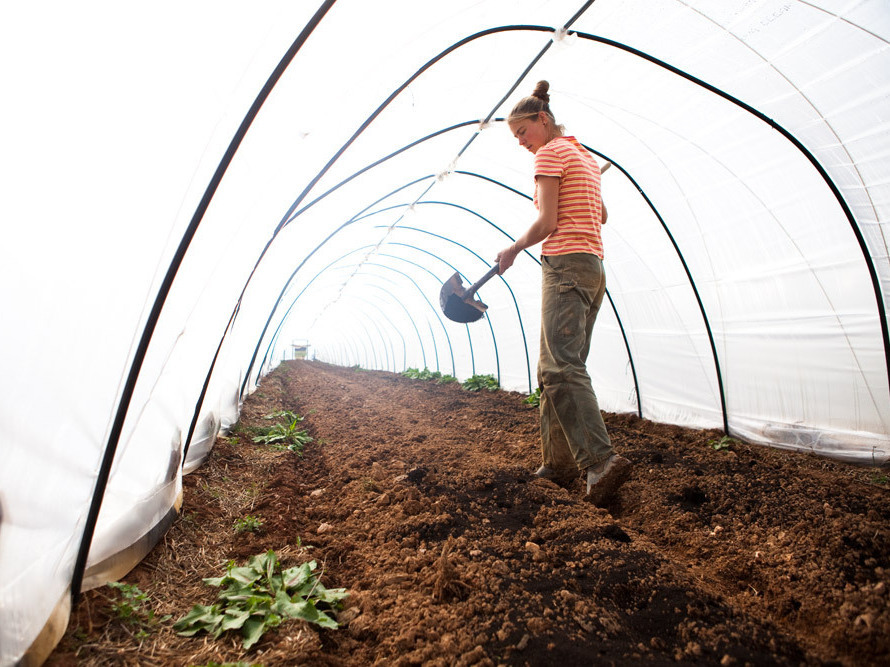 Katherine Stewart spreads compost as the farm prepares to start a new crop of greens.

Now some plants can handle being outside all winter. The Scottish and Russian kales, for instance, bounce back in spring and are ready for a fresh harvest by late March. Being out in the cold actually improves their taste.

"I want things like kale and mustards and collards to get frosted a little bit," Lester says. "The flavor is going to be that much more enhanced — sweet, hot."

But not all greens are so hardy. That requires these year-round farmers to provide shelter. They do so with a variety of low-tech shelters. Long batts of polyester are laid right on top of crops to protect them from wind and cold. Knee-high wire hoops topped with row cover or plastic offer a little more protection. High tunnels covered with plastic sheeting act as greenhouses for tender crops like salad greens.

"I have arugula here," Lester says, pointing to 4-foot-wide rows inside a high tunnel. It was sown right after Christmas. "We've had two harvests off these beds."

There's no artificial heat or light to fuel the plants' growth. But O'Neal says that even in the depths of winter, the passive solar heating can make it feel like May inside the high tunnel.

It "could be February and 30 degrees outside, and if the sun's out, you're sweating inside here. This is so pleasant to come into."

A Labor Of Love

Winter food production is labor-intensive, requiring that planting, transplanting and harvesting be done by hand.

"Farming in the wintertime is definitely a labor of love," says O'Neal. It's also hard work. "I cleared snow with Zach this winter," O'Neal says. "It was a wet snow, and it was night, and it was hard to see. You take brooms and you push 'em up over your head to push the snow off your high tunnel. It is one of the hardest things I've ever done in my life."

Lester grew up in Waterford, Va., and has always loved working with plants and soil. O'Neal grew up in New York City, but realized she'd rather be outside with nature than inside a cubicle all day.

They met when he noticed a spectacularly beautiful salad, crowned with one edible calendula flower, at a party he attended when they both lived in New York.

"I was like, who made that salad?" Lester recalls. "Can I have that edible flower?"

He wooed O'Neal with armfuls of vegetables, and they realized they shared a passion for sustainable farming. They bought their farm near Orange, Va., in 2009, and run the business together. Their son Eoin, 4, helps with the harvest. Their produce is more expensive than the supermarket variety — $9 a pound, compared to about $6 a pound for organic salad mix at a chain supermarket — but the customers are happy to pay that price.

One regular customer is Nora Pouillon, owner of Restaurant Nora in Washington, D.C. Hers was the first certified organic restaurant in the United States, way back in 1999. She knows good greens when she sees them.

"I'll take everything he's got," she says.

Check out Pouillon's recipe for Wilted Hearty Greens With Garlic.