Accessibility links
Libyan Opposition Boosted By Coalition Airstrikes Emboldened by U.S. and European military aid, rebels reportedly made a push on Monday from their eastern hamlet of Benghazi, taking the offensive for the first time in more than a week.

The Libyan capital, Tripoli, came under a new attack Monday by international airstrikes, Libyan TV reported. Tracers lit up the night sky and for the third night in a row there was a barrage of anti-aircraft fire.

NPR's David Greene, who is in Tripoli, told NPR's Melissa Block that he could see lines of red light shooting up into the sky coming from the direction of the sprawling military compound where Moammar Gadhafi has a home. The Libyan leader's whereabouts are unknown.

"They haven't had much success using this antiquated anti-aircraft fire that they have," he said. 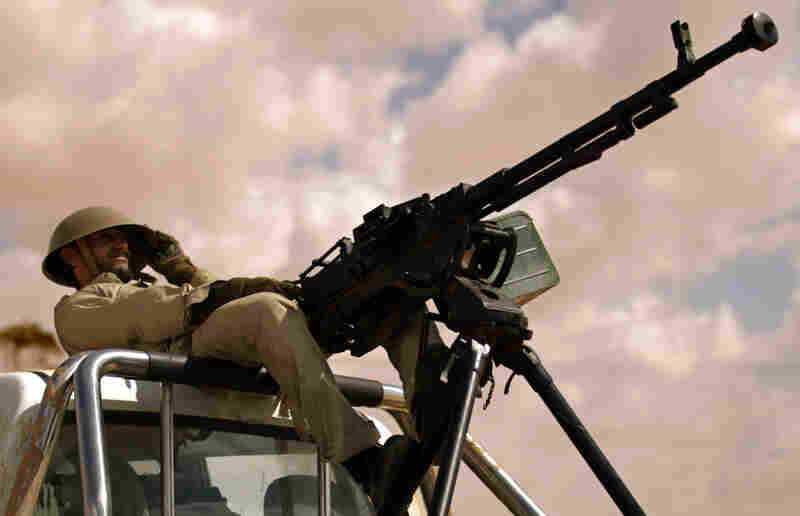 A Libyan rebel holds his helmet as he retreats with comrades under heavy fire during a failed attempt to take the town of Ajdabiya from Gadhafi forces on March 21. Patrick Baz/AFP/Getty Images hide caption 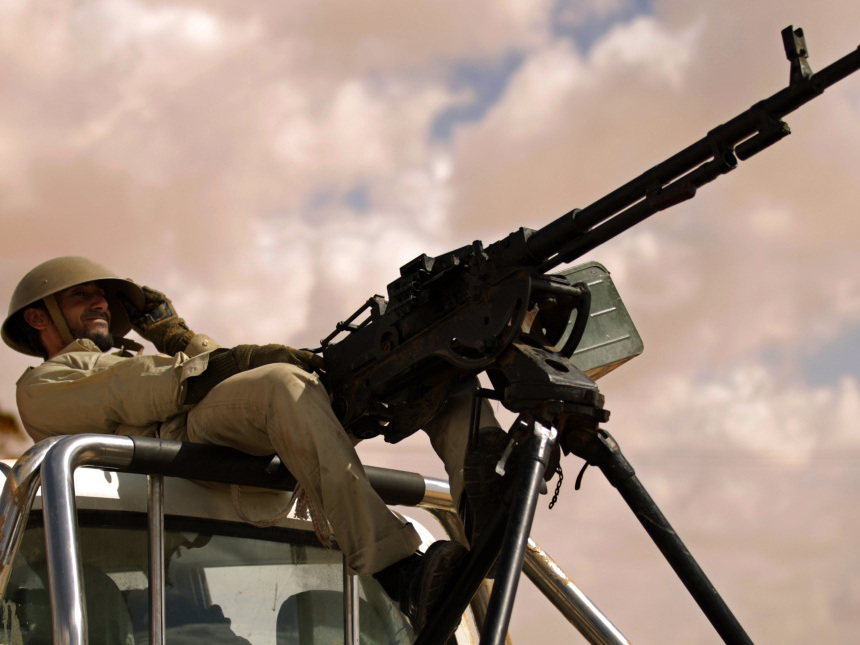 A Libyan rebel holds his helmet as he retreats with comrades under heavy fire during a failed attempt to take the town of Ajdabiya from Gadhafi forces on March 21.

Greene said U.S. and British officials are starting to move toward a second phase where some of the air attacks of Gadhafi's air defense might be beginning to wrap up.

President Obama, speaking in Santiago, Chile, said Gadhafi's air defenses had been "negated," adding that he favored the ouster of the Libyan leader.

"It is U.S. policy that Gadhafi needs to go," he said.

But Gen. Carter Ham, the commander of U.S. African Command, said the operations were not meant to remove Gadhafi.

In Moscow, Defense Secretary Robert Gates the U.S. will turn over "primary responsibility" for the operations to allies — in a matter of "days."

The allied airstrikes on Gadhafi's position emboldened Libya's rebels, who reportedly made a push on Monday from their eastern hamlet of Benghazi, taking the offensive for the first time in more than a week.

The rebels' breakout was made possible by coalition airstrikes that smashed a column of Libyan army tanks and armored personnel carriers outside Benghazi.

Along the way, rebel troops swept into the nearby oil port of Zwitina, just northeast of Ajdabiya, which had been abandoned by regime forces. A power station there hit by shelling on Thursday was still burning.

Gadhafi forces have ringed the city's entrance and were battling with opposition fighters inside, rebels said. The plan was for the rebel forces from Benghazi "to pinch" the regime troops while "those inside will push out," rebel fighter Fathi Obeidi told The Associated Press. He said a special commando unit that defected to the opposition early on in the uprising was inside the city leading the defense.

For the past 10 days, Gadhafi's forces have driven back rebel fighters in eastern Libya, overwhelming the opposition with tanks, artillery, warplanes and warships.

A coalition missile strike on Sunday damaged a military base that houses Gadhafi's residential compound, but U.S. Navy Vice Adm. William E. Gortney told a Pentagon news conference on Monday that the Libyan leader was not on a list of targets for coalition aircraft.

Gadhafi, however, could be in danger "if he happens to be at a place, if he is inspecting a surface-to-air missile site and we don't have any idea that he's there or not," said Gortney, who is staff director for the Joint Chiefs of Staff.

It was not known where Gadhafi was when the missile hit the sprawling military compound known as Bab Al Azizia, which has long been a symbol of the regime's defiance against the west. In 1986, President Ronald Reagan ordered airstrikes there, reportedly killing one of Gadhafi's daughters. A statue there — of a large golden fist crushing the model of a U.S. fighter jet — was shown on Libyan state television Sunday as Gadhafi delivered a 12-minute speech in which he warned the coalition: "You're not going to leave victorious."

An administrative building at the compound hit by the missile lay in ruins, said NPR's Greene, who was escorted to the scene by a government spokesman along with other foreign journalists. The journalists also were shown a group of people that the spokesman openly acknowledged were acting as human shields.

"Hundreds of civilians are here in this place to protect it as a voluntary human shield," Ibrahim Moussa said. "So the danger of harming people was real, was there, and we are really thankful to God, not to the Americans, that no one was hurt today — none of the children, none of the families, none of the civilians."

About 300 Gadhafi supporters were reportedly in the compound when the building was hit. It was not known if any were hurt.

Gortney said there is no evidence so far that Libyan civilians have been wounded in the air assault code named Odyssey Dawn, and that no allied planes or pilots had been lost. He said stealth B-2 bombers, jet fighters, more than 120 Tomahawk cruise missiles and other high-tech weapons have been used to enforce last week's U.N. mandate authorizing a no-fly zone over Libya.

"We judge these strikes to have been very effective in significantly degrading the regime's air defense capability," he said. "We believe his forces are under significant stress and suffering from both isolation and a good deal of confusion."

The Pentagon said its targets in and around Tripoli have been confined to Libyan air defense systems. But NPR's Tom Gjelten reported that the military also said it's possible there may be a facility associated with the air defense system within one of Gadhafi's compounds.

Henri Guaino, a top adviser to the French president, said the weekend attacks had hobbled Libya's air defenses, stalled Gadhafi's troops and all but ended attacks on civilians. Asked how long the allied effort would continue, Guaino, replied simply: "A while yet."

British Prime Minister David Cameron on Monday said the strikes had averted "a bloody massacre in Benghazi." He called the actions "necessary, legal and right" and that they were aimed at suppressing Libyan air defenses to enforce the no-fly zone and to protect civilians.

"Good progress has been made on both fronts," he said.

U.S., British and French planes also targeted a line of tanks moving on the eastern city of Benghazi, the heart of the opposition.

The airstrikes dealt a strong blow to Gadhafi's lead forces that had been attacking Benghazi, but it wasn't clear whether the ad hoc rebel troops will be able to capitalize on the Western military intervention.

Mustafa Geriani, a spokesman for the opposition's provisional government in the east, known as the National Libyan Council, acknowledged that the rebels' learning curve "has been quite steep."

Speaking in Tobruk, Geriani told NPR that there was an effort toward "trying to regroup those young men, trying to take the operation ... more professional and have some planning to it. I think we can manage it right now. This operation can be managed."

No NATO Consensus Yet

Over the weekend, Spain, Belgium and Denmark joined the anti-Gadhafi coalition already comprising the U.S., France and Britain. Also joining was Qatar, the first Arab country to show open support for the coalition.

Gates, the U.S. defense secretary, said late Sunday that the U.S. expects either France, Britain or NATO to take control of the military operation "in a matter of days."

But that transition could result in a "war by committee," said NPR's Gjelten. "The U.S. military's experience with wars that are run by committees is not a very good one."

Obama said Monday the U.S. would transfer the lead role in the Libyan operation — which he referred to as an international action — to other allies. He said the transition would take place in days, not weeks.

Military planners have been working for weeks on options NATO could take if given a U.N. mandate to help protect civilians from Libyan government attacks. Although the U.N. Security Council authorized the no-fly zone, the 28-member NATO alliance must reach political consensus. Turkey blocked the alliance from approving a plan for airstrikes during a meeting Monday in Brussels. Diplomats said Turkey, a NATO member that views its role as bridging Europe and the Muslim world, was angered at being excluded from an emergency weekend summit in Paris in which 22 participants agreed to launch armed action against the Libyan regime.

And European unity was further called into question at the European Union Monday, as Germany said it favored focusing on economic, not military, sanctions on Gadhafi. German Foreign Minister Guido Westervelle said Berlin's opposition should not be construed as sympathy for "the dictator Gadhafi."

"It means that we see the risks," Westervelle said.

Former Undersecretary of State Nicholas Burns told NPR's Robert Siegel that the coalition has been successful in its first days, but the road ahead is "murky."

"I think the gamble that President Obama and coalition leaders have taken is that they have not clearly defined the mission," he said.

Meanwhile, Russia — which abstained from the U.N. Security Council's no-fly vote last week — called that resolution flawed. Prime Minister Vladimir Putin said the U.N. directive "allows everything and is reminiscent of a medieval call for a crusade."

'We Promise You A Long War'

On Sunday night, Libyan army spokesman Col. Milad al-Fokhi said units had been ordered to cease fire at 9 p.m. local time, but the hour passed with no letup in military activity.

Instead, Gadhafi vowed to fight on. In a phone call to Libyan state television Sunday, he said he would not let up on Benghazi and said the government had opened up weapons depots to all Libyans, who were now armed with "automatic weapons, mortars and bombs." State television said Gadhafi's supporters were converging on airports as human shields.

"We promise you a long war," he said.

NPR's David Greene in Tripoli, Eric Westervelt in Tobruk and Benghazi, Teri Schultz in Brussels and Tom Gjelten in Washington, D.C., contributed to this report, which includes material from The Associated Press