Accessibility links
Gadhafi Supporters Rally Amid Rubble In Tripoli With U.S. and allied forces using missiles and bombs to strike at the heart of Moammar Gadhafi's military defenses, the Libyan leader finds himself standing alone against the world once more. But in Libya's capital, where part of Gadhafi's compound was hit Sunday, his supporters celebrated his continued defiance. 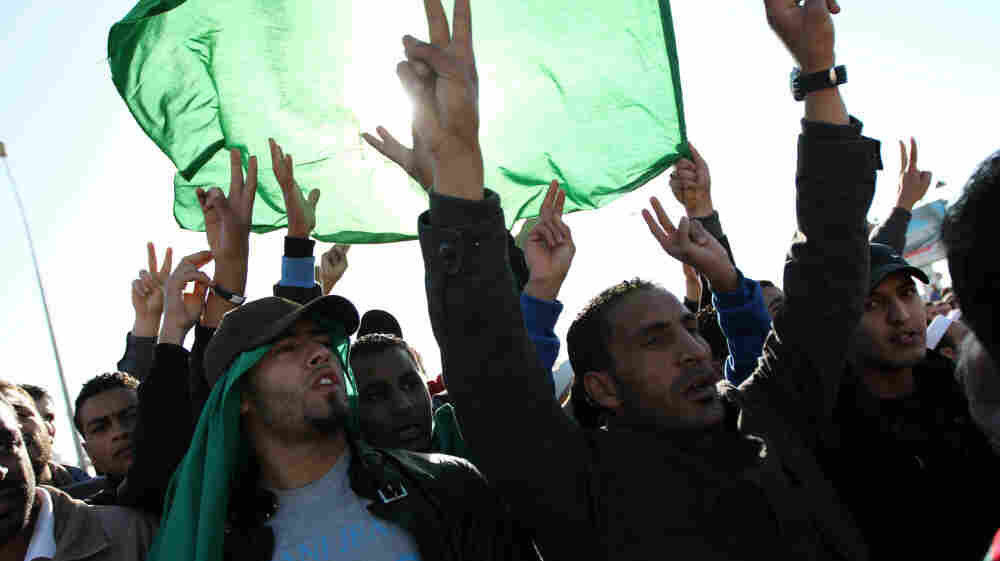 Men in Tripoli join in the part-protest, part-funeral for civilians said to have died during recent airstrikes in Libya. They gathered at a place along Libya's Mediterranean coast known as a cemetery for martyrs. Jim Wildman/NPR hide caption

With U.S. and allied forces using missiles and bombs to strike at the heart of Moammar Gadhafi's military defenses, the Libyan leader finds himself standing alone against the world once more. But in Libya's capital, where part of Gadhafi's compound was hit Sunday, his supporters celebrated his continued defiance.

From a roof in Tripoli on Sunday night, we saw a plume of smoke rise near Bab Al Azizia, the sprawling military base where Gadhafi has a home. A couple of hours later, the government opened the doors of the compound and invited foreign journalists in.

We were led through a party of people — apparently to show us that people are still celebrating and standing by their leader. And then we walked through a lot of rubble and came to a building that has totally collapsed. The government says this administrative building was hit by a missile earlier Sunday.

"Hundreds of civilians are here in this place to protect it as a voluntary human shield," said Ibrahim Moussa, a government spokesman. "So the danger of harming people was real, was there, and we are really thankful to God, not to the Americans, that no one was hurt today — none of the children, none of the families, none of the civilians."

He said someone working there had handed him part of the rocket that hit the building, but that he couldn't confirm it.

At the Pentagon, Vice Admiral Bill Gortney was asked Sunday night if Gadhafi himself is a target, and he said no. But Gortney did say the allied forces are going after "command and control" structures in Gadhafi's air defense system. And it's certainly possible a building on this base played such a role.

Gadhafi loyalists have been sleeping and partying at Bab Al Azizia, the downtown compound, since the attacks began, to show support for their leader. The base has long been a symbol of Gadhafi's defiance and ability to survive. In 1986, President Ronald Reagan ordered airstrikes here, reportedly killing one of Gadhafi's daughters. There's still a statue here — a large golden fist crushing the model of a U.S. fighter jet.

The statue was shown on Libyan state television Sunday as Gadhafi delivered a 12-minute rant.

"You can't do anything in Afghanistan. Bin Laden defeated you. This week, man, you've used all your resources, and now you've accepted defeat and you're ready to leave. And the same in Libya. You're not going to leave victorious," he said.

To defend the country, Gadhafi has said he is putting weapons in the hands of the Libyan people.

Shots were fired into the sky Sunday afternoon along the shore of the Mediterranean. It was part celebration, part funeral at a place known as the "cemetery for martyrs." Twenty-six graves were dug and prepared, we were told, for Libyan soldiers and civilians killed in airstrikes Saturday.

One man watching on the sidelines spoke quietly to a few journalists. Police were watching his every move. The funeral, he whispered, was all lies. No civilians were killed. He said there are many people in Tripoli who don't like Gadhafi. But right now, they're living in fear. Give the military strikes a week, he said. People in Tripoli will rise up again.

At one gravesite, Ibrahim Dao said a 3-month-old girl, his distant cousin, was among those killed in a missile strike and was being buried. As reporters asked details about the girl, Dao began to get upset. "From your questions, I feel like you think that we killed her," he said. "I don't know why."

Anger at the media has been stoked by the government, with state TV saying journalists from around the world are ganging up on Gadhafi, telling lies about what's been happening here. People sought journalists out to make sure they got the real story.

"You know, I love Moammar Gadhafi like my father," said one young man, a 15-year-old who gave his first name, Ahmed.