Accessibility links
After Presidential Runoff, Haiti Awaits Result Haitians went to the polls to elect a new president Sunday. The contest pit an elderly former first lady against one of Haiti's most famous and colorful pop singers. Despite some delays at polling places, the election was much smoother than November's troubled primary. But results aren't expected until the end of March. 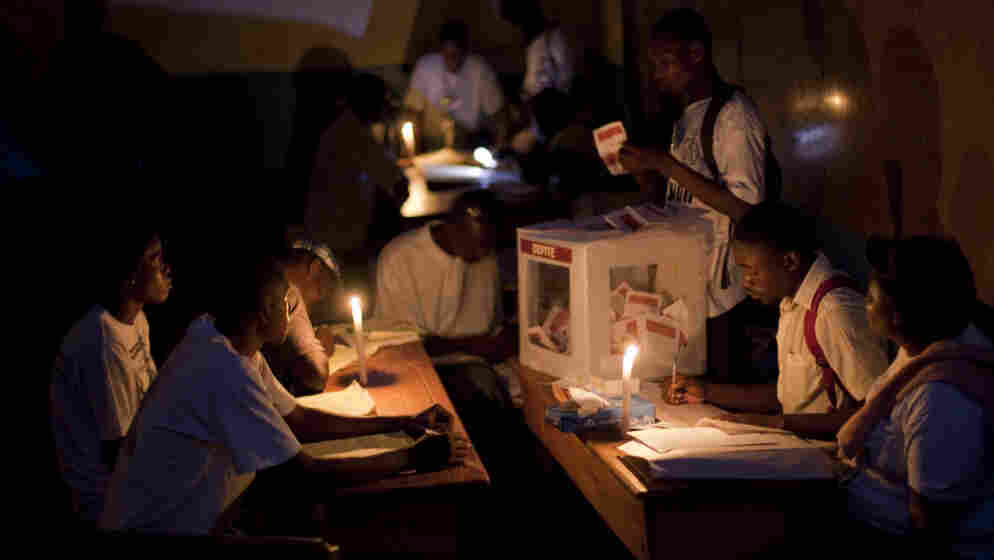 Electoral workers count ballots by candlelight at a polling station at the end of a presidential runoff in Port-au-Prince, Haiti, on Sunday. The two choices were Mirlande Manigat, the former first lady, and Michel "Sweet Micky" Martelly, a Haitian music star. Results are expected at the end of March. Ramon Espinosa/AP hide caption 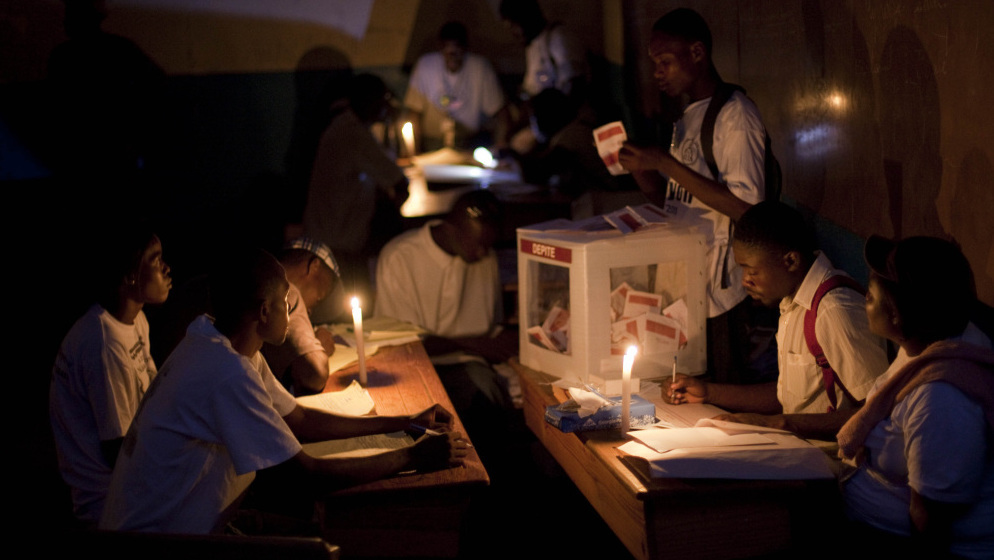 Electoral workers count ballots by candlelight at a polling station at the end of a presidential runoff in Port-au-Prince, Haiti, on Sunday. The two choices were Mirlande Manigat, the former first lady, and Michel "Sweet Micky" Martelly, a Haitian music star. Results are expected at the end of March.

Haitians went to the polls Sunday to elect a new president in a contest that pit an elderly former first lady against one of the country's most famous and "colorful" pop singers. Despite some delays at polling places, the election went off much smoother than November's troubled primary. But Haitians now must wait until the end of the month for results.

At 7 a.m. outside a polling place in the Bel Air neighborhood of the capital Port-au-Prince, voters were pressed against each other, lining up down the block.

Placide Marie Nadia, who was supervising the voting, said when she arrived to set up the polling place, she found only ballots from a 2009 Senate race.

INTERACTIVE: A Year Of Challenges

It is so frustrating that the authorities did such a poor job, she said. And she didn't get the black ink pens to mark voter's thumbs so that they can't vote again.

Outside, Gil LuJean, an unemployed carpenter, had given up his spot in line for a piece of shade across the street.

LuJean recited the slogan many voters said brought them out to the polls: change. He said he'd cast his ballot for pop singer Michel Martelly.

The 50-year-old Martelly is a newcomer to politics, and that seems to have won him a big following, especially among the poor.

Down the street, at another polling place, Jacqueline Antoine said she went for Martelly, too.

She said she is sick of living in a tent. She has been there, with six other family members, since the January 2010 earthquake that killed hundreds of thousands of people and left more than a million homeless. Antoine said it's no way for human beings to live.

Whoever becomes Haiti's next president will face the daunting challenges of managing billions of dollars of foreign reconstruction aid, and fighting a deadly cholera outbreak.

He or she will also have to contend with two former leaders who have recently returned to the country. Former dictator Jean Claude Duvalier and ex-President Jean Bertrand Aristide. Many feared that Aristide's return Friday would complicate Sunday's election. But the former president remained silent in his home.

The streets were calmer than last November's primary, although some Martelly supporters chanted that the country will see fire if he is not declared the winner.

As Martelly cast his ballot at a public school, a huge crowd formed. Nearly trampled by reporters, Martelly spoke only briefly.

He said today is the day change begins in Haiti. He promised that Haitians will get access to jobs and education.

Education was a big issue for 23-year-old student Bernard LaJeune. He voted for candidate Mirlande Manigat.

Politically, both candidates are right of center, but the similarities end there. Manigat is quite reserved, was educated in France and draws her support among students. Martelly is better known for his crude antics as a pop performer. He doesn't have a college degree and has admitted to past drug use.

'Democracy Is Getting Strengthened'

Despite early complications at polling places, this round went off better than November's primary. Haitian election council chief Gaillot Dorsainvil apologized for the voting delays. Through an interpreter, he said Sunday's vote was a great step forward for Haiti.

"Democracy is getting strengthened in Haiti," he said.