Accessibility links
From Los Angeles, Japanese Church Sends Aid And Prayers West Los Angeles is home to one of the country's largest Japanese communities. This past Sunday, the congregation at the historic West Los Angeles United Methodist Church gathered to raise money for earthquake and tsunami victims in their homeland, Japan. 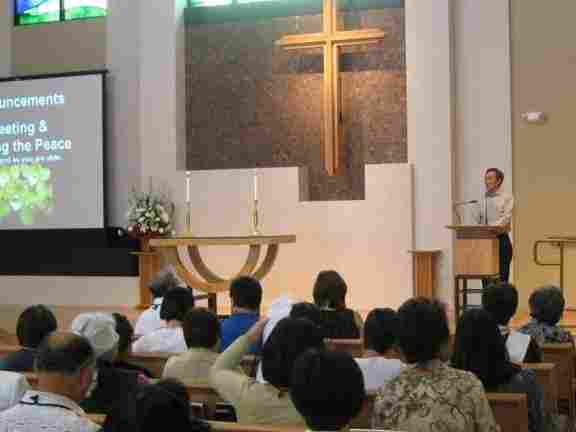 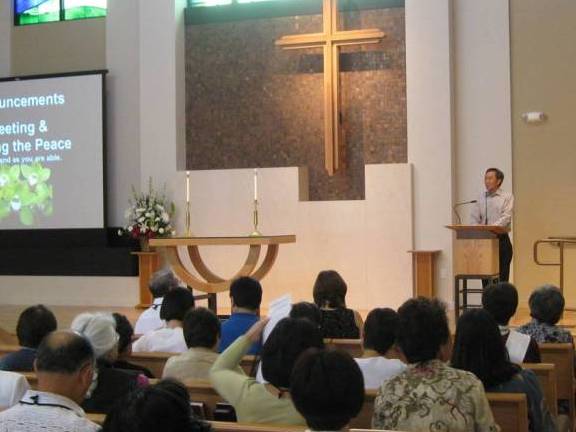 Congregants at the West Los Angeles United Methodist Church gathered $8,000 on their first day of fundraising for the earthquake and tsunami victims in Japan.

Last week, California Gov. Jerry Brown designated March 20 as a day of remembrance and prayer for earthquake and tsunami victims in Japan, but many in Los Angeles didn't need the reminder.

Los Angeles has one of the largest Japanese communities in the country, a good part of which lives in West Los Angeles. The community is sometimes called "Little Osaka," though more people know it as "that street west of the 405 freeway where all the Japanese restaurants are."

But there's more to the neighborhood than sushi bars and noodle shops. Japanese immigrants began settling there in the 1910s and returned after World War II, when they were released from the camps where Japanese immigrants and their descendants were interned. Today, the younger generation haunts the boutiques and clubs while the older generation maintains ornate gardens in front of modest stucco bungalows.

And on Sundays, the congregation at the West Los Angeles United Methodist Church gathers — just as they have since the church was founded, in 1930.

It's a small congregation — not many more than 100 people show up on any given Sunday morning — but George Kikuta, who has worshipped here for more than 40 years, says you wouldn't know it from the amount of money they're raising to help the victims of Japan's multiple disasters.

"Last Sunday was the first Sunday and we made $8,000," Kikuta says. "Today I'm hoping we can double and triple that."

Many here have friends and relatives in Japan — Kikuta has an uncle and six cousins in northern Japan, about 50 miles from the crippled nuclear reactors.

"I talked to one of them and she's sleeping in a car right now parked in front of her house," Kikuta says. "The house is OK but, because of the after shake, she's so afraid."

The fear has been overwhelming for Chimie Hashimoto, who has family and close friends in Japan. She now knows they're OK, but she had no word of them for nine days.

"I pray every day and I'm every day look[ing] at the TV," Hashimoto says.

Another congregant, Toshio Takahashi, says the Japanese people have set an example for the world with their resolute stoicism.

Takahashi says he hopes the U.S. can learn from how the Japanese people are enduring the devastation caused by the earthquake. After all, he says, something similar could happen here. And in Los Angeles, everyone expects it will.