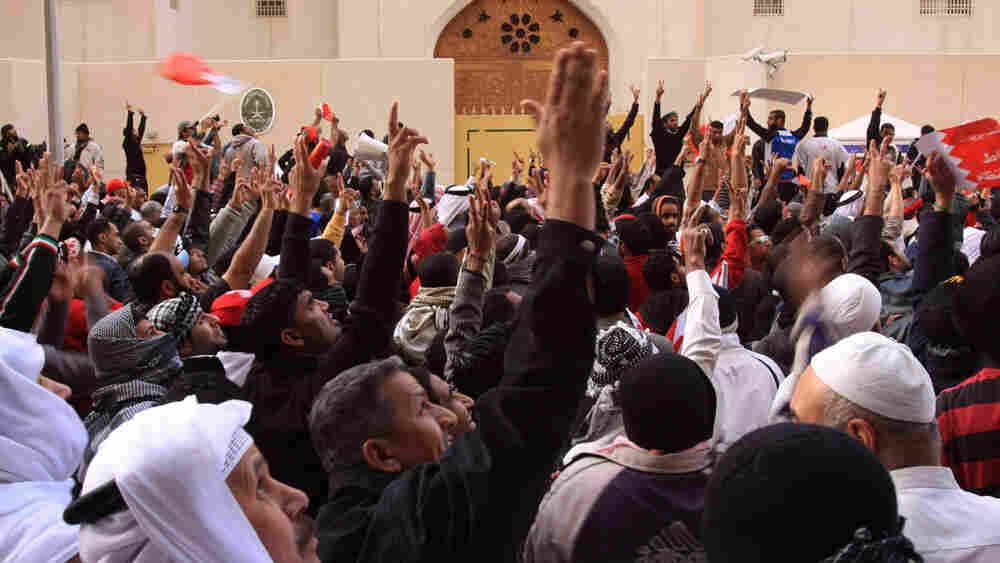 Anti-government protesters demonstrate in front of the Saudi Embassy in Manama, Bahrain, on March 15. Frenzied clashes swept Bahrain a day after a Saudi-led military force entered the country to help defend the Sunni monarchy from a Shiite-led protest movement. Hasan Jamali/AP hide caption

Last week's crackdown on protesters in Bahrain has left many in the capital, Manama, angry with the United States.

They say they believe the White House tacitly approved the attacks on demonstrators and put its strategic interests over democratic principles.

On Friday at the Sadiq Mosque in Manama, the preacher recounted the week's extraordinary events. Sheik Issa Qassim criticized Bahrain's royal family for sending in soldiers and police to crush an anti-government rebellion — an assault that left at least seven dead and hundreds wounded.

Then, he criticized the United States for not doing more to prevent it.

"They have influence they're not using to save the people here," he said.

Walking out of the mosque, one of the worshippers, Isa Ashoor, agreed. "Everybody is thinking America gave them the green light to beat the Bahraini people," he said.

America is Bahrain's most powerful ally.

Ashoor, who works in the airline industry, said if America warned the royal family against smashing the demonstrators, it would have been more reluctant to do.

He noted that U.S. Defense Secretary Robert Gates came here recently to assess the situation. Soon afterward, Saudi troops drove onto the island at the royal family's request to help crush the rebellion.

Ashoor says he feels differently about the United States today from the way he did a few weeks ago. "We was happy with them, they was a friend to us," he said. "But now the U.S.A. government, we are saying they are bad."

Secretary of State Hilary Clinton said she was alarmed by the violence in Bahrain and deplored the use of force.

Marc Toner, the acting deputy spokesman for the State Department, said, "There's no way to resolve this situation through security or excessive force. This needs a political — there needs to be a political dialogue that leads to a political resolution, essentially. But we're deeply troubled by reports of injuries and deaths of civilians."

But protesters in Manama say it's not what Washington said. It's what it didn't say.

When Saudi troops rolled across the causeway into Bahrain, the White House didn't publicly tell them to turn around. Saudi Arabia, a close American ally and the world's largest oil exporter, is frightened that protests in Bahrain could encourage more unrest among its own people.

A businessman who gave only his first name, Ghani, said the United States supports monarchies in the region because they provide stability.

"I know there are clashes between your interests and your values. Where is your democracy values? Where is it? We want to see these values," he said.

Ghani is a Shiite Muslim, one of the majority in Bahrain. Shiites say they are treated like second-class citizens by the ruling Sunni minority.

They said they were protesting to end discrimination and replace the monarchy with a democratic system.

But, Ghani said, the United States has more pressing concerns. Bahrain, a tiny island, is home to the U.S. Navy's 5th Fleet. "Maybe they think the 5th Fleet here will not be protected by a democratic government," he said.

The 5th Fleet's main job is to protect the crucial shipping lanes in the Persian Gulf. And that's not lost on Ghani. "The stock of the world oil here, 25 percent of it available in the Gulf ... so American needs to protect this area because they want to maintain their oil. And they think, they think the government protect their interest in this regard," he said.

After weeks of protests, the government of Bahrain has now retaken control of the capital. The United States continues to urge a dialogue between the opposition and the monarchy. But that won't be easy.