Accessibility links
The End Of The Road: Saying Goodbye To Freeways A growing number of cities are tearing down freeways that have reached the end of their useful lives. Cities as diverse as New Haven, New Orleans and Seattle are either dismantling major roads or considering it to save money and improve the quality of life for residents. 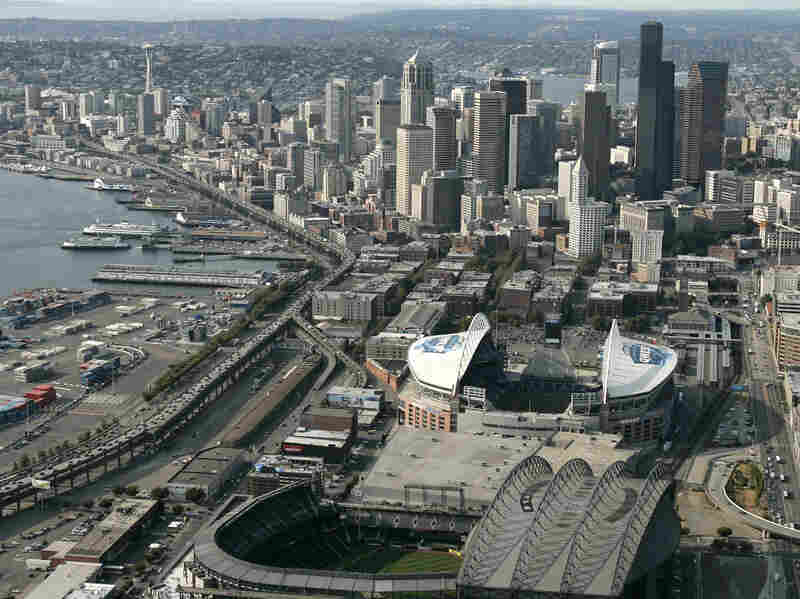 The Alaskan Way Viaduct, the raised two-level highway that runs along Seattle's downtown waterfront, is seen from the air in 2006. Seattle is now replacing it to improve mobility for people and goods. Ted S. Warren/AP hide caption

Half a century after cities put up freeways, many of those roads are reaching the end of their useful lives. But instead of replacing them, a growing number of cities are thinking it makes more sense just to tear them down.

To Clevelanders like Judie Vegh, the whole idea of tearing down a freeway just sounds crazy. "I think it's a pretty bad idea for commuters because I commute every morning downtown," she says.

Vegh takes the West Shoreway each day from her home in the nearby suburb of Lakewood, Ohio. When she learned that the city plans to convert this freeway into a slower, tree-lined boulevard, she was not amused.

"If it was 35 miles per hour, I would just be later than usual," Vegh says.

How did this happen? After all, this is the country that always saw roads as a sign of progress.

Now, taking down freeways has gone mainstream. Cities as diverse as New Haven, New Orleans and Seattle are either doing it or talking about it. The chief motivation seems to be money. 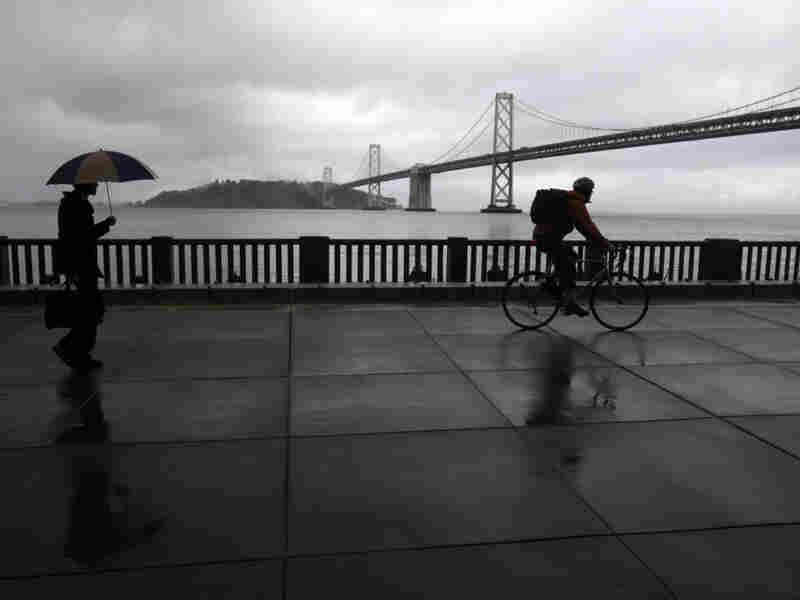 A pedestrian and cyclist are seen along the Embarcadero with the San Francisco Oakland Bay Bridge in the background. San Francisco dismantled a freeway in this location in the early 1990s. Marcio Jose Sanchez/AP hide caption 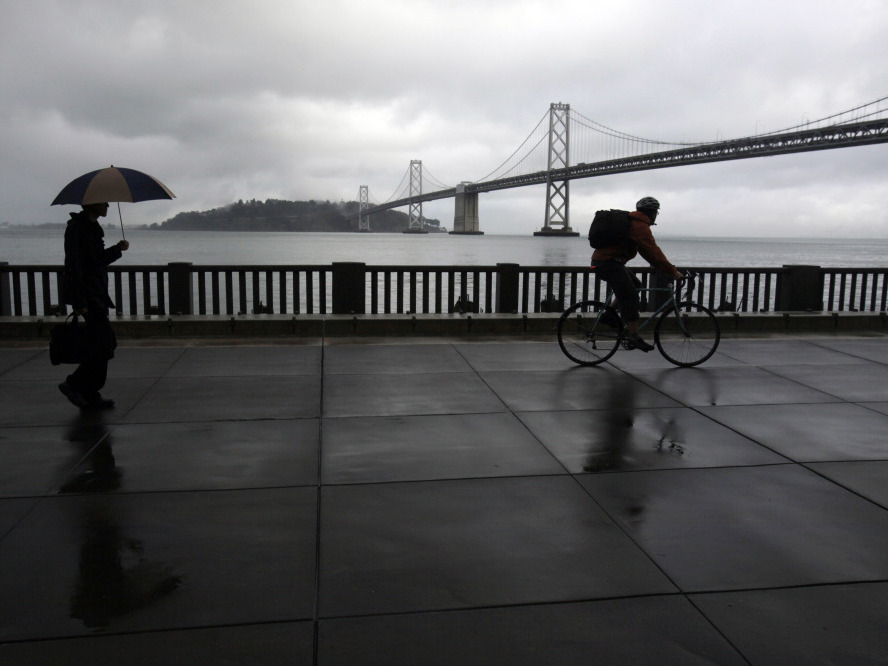 A pedestrian and cyclist are seen along the Embarcadero with the San Francisco Oakland Bay Bridge in the background. San Francisco dismantled a freeway in this location in the early 1990s.

Milwaukee removed a freeway spur for $30 million. Officials estimated it would have cost between $50 million and $80 million to fix that roadway. That inspired Akron, Ohio, officials to study what to do with an aging six-lane freeway that few motorists use.

"Perhaps we can remove sections of it and have it fit in better with the Akron grid system and offer an economic benefit by making land available," says Jim Weber, Akron's construction manager.

This is the city planner's dream: Take out an underused freeway, open up land for new businesses or parks and magically more workers will move back to the city and property values will soar. So far, though, the results have been mixed.

Milwaukee hasn't seen as much development as proponents hoped after that city took down a spur of the Park East Freeway. But San Francisco revitalized an entire neighborhood by taking down the Embarcadero Freeway in the early 1990s.

For many cities, Manhattan's SoHo neighborhood represents the ideal because it's dense and wealthy. In the mid-20th century, it resembled a neighborhood you'd be more likely to see in some Midwestern cities. It was a fading industrial area after much of its population had fled to the suburbs. 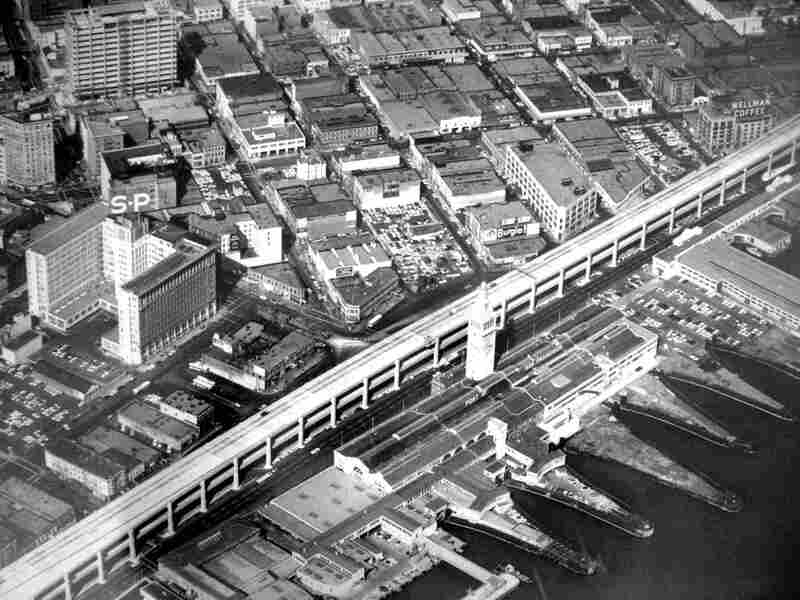 The Embarcadero Freeway, circa 1960, as it once existed along San Francisco's waterfront. Telstar Logistics/Flickr hide caption

The uber-planner Robert Moses, famous for the freeways he built in New York, wanted to stick a 10-lane freeway there.

"This would have created essentially a giant Berlin Wall cutting off what became SoHo from what became Tribeca," says Tom Vanderbilt, the author of Traffic: Why We Drive The Way We Do (and What It Says About Us). "And, these two are now sort of essentially connected in what has become a huge swath of really desirable real estate."

But Moses' freeway plan never got built, and today urban planners have come full circle. Now that most cities are far less industrial, planners like Cleveland's Brown remain focused on sustainability and about being able to walk places.

"When you talk about improving the quality of life in neighborhoods and a city, that translates directly into increases in population and jobs," he says.

Support From The Transportation Department

Few are talking about removing the most heavily traveled roads. But even the U.S. Department of Transportation, which spent decades promoting highways, recently stunned planners when it backed some freeway removal plans.

In Cleveland, many are warming to the West Shoreway's becoming a boulevard. Walking around a neighborhood near the Shoreway, Don Burrows says he thinks the neighborhood would benefit.

And, for all the talk about making cities more livable or sustainable, planners are trying to sell a skeptical public on the idea that a better quality of life trumps a slightly longer commute.

This story was produced by Changing Gears, a collaboration of WBEZ Chicago, Michigan Radio and ideastream Cleveland.