Accessibility links
Getting To Chicago's Boys Before Gangs Do Seven years ago, a social worker in Chicago created Becoming a Man, a program that tries to curb violent behavior by offering young boys mentoring through counselors and peer group workshops. A critical element of the program involves students discussing their feelings.

In some of Chicago's troubled neighborhoods, it's not unusual for boys to join gangs at a young age. For many, it's a road fraught with violence.

But a group called Becoming a Man (BAM) is working on getting to those youngsters before they're drawn into gang life or drop out of school.

Tony DiVittorio, a 42-year-old, muscular and tattooed social worker, created BAM in 2003 in an effort to mentor boys. He says young males are often more likely than females to be victims or perpetrators of violent crime.

"Set up a circle right here, along the black line. A big circle," he tells them.

BAM operates in 16 Chicago public high school and elementary schools. The students are often at risk of failing, have behavior problems or have no positive male role models in their lives.

The BAM counselors conduct clinical assessments, provide individual counseling if needed and consult with teachers. The curriculum is built around core principles such as integrity, accountability and positive ways to express anger. 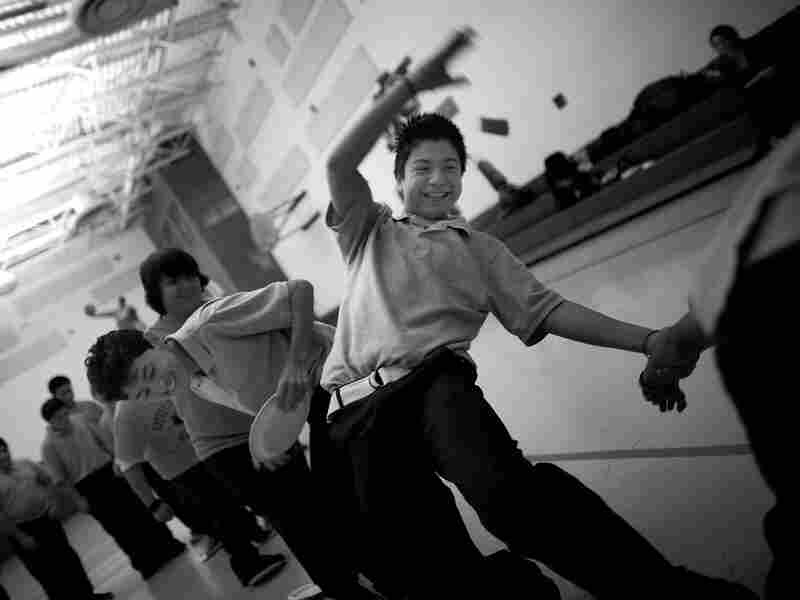 Students participate in a team-building activity. These 13- and 14-year-olds are vulnerable to gangs and have already been exposed to violence. Fifteen students who attend Chicago Public Schools have died by gunfire this school year. David Gilkey/NPR hide caption

This day's session begins with a team-building exercise. The boys place paper plates on the floor and then use the plates as stepping stones to gingerly navigate their way over imaginary lava.

The goal is for everyone to get across.

DiVittorio demonstrates by throwing a plate on the floor, stepping on it and lifting his foot to advance to a second plate while another BAM counselor steps on the first. It's a coordinated dance, and the boys try to follow suit.

The students strategize. They wobble and lean and stretch to reach the paper plates, one after the other. Sometimes, it can get a little precarious as they misstep and tumble into the pretend pool of lava.

DiVittorio asks the students what they should do differently. One suggests that they hold hands or hold each other up.

It's a fun activity for the boys, but social worker DiVittorio is thinking clinically.

"The real purpose of a group mission is group cohesion," he says. "As a facilitator, I'm looking to see how they're respecting each other, how they're working together. If they pass it or they fail, at the end we talk about it. We talk about what their successes were [and] if there was blaming going on. Then we start to generalize that outside of the group."

The boys earn rewards like field trips or free time in the gym when they complete a set number of missions. At the end of this one, DiVittorio asks the students what made them successful. They answer that it was teamwork.

The 13- and 14-year-old BAM members know many their age that have joined gangs.

At least 15 students who attend Chicago Public Schools have died by gunfire during this school year. The number is higher for kids who are either dropouts or go to other types of schools.

Chicago police report that the number of school-aged children shot to death in 2010 was 70. More than half of those were gang-related.

The vast majority of youths killed over the past five years have been shot.

Student Jossue Salgado says he and his schoolmates know the threats of their neighborhood.

"Three days ago, I saw a cop and I heard that someone was shot, a gangbanger, because he was in a gang," Salgado says.

DiVittorio says the violence in the neighborhood makes one aspect of BAM critical. He calls it "men's work," where students sit in a circle and discuss their feelings — a topic that many consider taboo, he says.

"It's very challenging. It's very confrontational," DiVittorio says. "And it's based on this idea that there are no standardized rites of passage. There's no way for a boy to become a man in our society that's standard."

During the session, DiVittorio talks to the boys about integrity. He focuses on 14-year-old Armando Isaula.

A year ago, when Isaula was in the seventh grade, he used to fight other students and disrupt classes because he "didn't really care," Isaula says.

Now in eighth grade, he has changed his attitude, and most of his teachers praise him. But DiVittorio recently got word from a teacher that Isaula was still misbehaving in one classroom.

DiVittorio asks Isaula if he has his permission to discuss the issue in front of the group. DiVittorio says it's about integrity.

At first Isaula is hesitant.

"You just really want to be nosy and know about other people's business?" he asks.

DiVittorio says it's about the group helping Isaula be accountable. After a moment, Isaula agrees to discuss the matter and also offers an explanation.

"Honestly, since everyone is always playing around, I decided to play around, too, because I think about it like a little break but it's not all right," Isaula says.

The group then offers suggestions, Isaula promises to do better, and DiVittorio shifts the focus back to Isaula's successes.

"I'm getting so many positive reports back from teachers, and I think you deserve a group affirmation for that," DiVittorio says. Then he calls Isaula a man of integrity, and his classmates applaud.

The University of Chicago Crime Lab is evaluating BAM and other programs designed to curb violence. Co-director Harold Pollack says the lab wants to find out whether a program that began as one man's labor of love could work across a school system.

Pollack says BAM, at a cost of about $1,000 per student, is promising.

"We don't want to make any claims that any program is going to change the homicide rates in the city [or] deal with the large problems that these kids face," Pollack says. "But one thing we showed is that it's feasible to implement this program on a big scale."

The students in the gymnasium have their own notions of how BAM and DiVitorrio have helped them.

Gerardo Rosado says he has learned how to control his emotions "and also what to do in certain situations — not to always do everything physically," Rosado says. "You gotta think."

Adrien Campos says BAM teaches him and the others about life, "how to express ourselves and how to be true."

As the session comes to a close, DiVittorio tells the boys not to forget what they have learned. He tells them to "BAM out" as they shake hands and touch their chests at the level of their hearts.

The BAM handshake is oddly like a gang ritual. DiVittorio says this is not gang language, though — it's an age-appropriate closing ritual that lets these young men show they are connected.