Accessibility links
'Suicide By Cop' : A Troubled Soldier's Desperate Attempt Brock Savelkoul survived a rocket explosion and shootout in Iraq. He never dreamed his showdown would come with police in a pasture in North Dakota.

A few months ago, NPR and ProPublica published an investigation about five soldiers who suffered traumatic brain injuries from the same explosion in Iraq. The report also explored the cognitive and emotional problems they've been having ever since. Twelve days later, one of the soldiers piled an armload of guns and semi-automatic weapons into his pickup and led police on a high-speed chase across North Dakota.

At 8:20 p.m. on Sept. 21, 2010, Iraq veteran Brock Savelkoul decided it was time to die. He lurched from his black Tacoma pickup truck, gripping a 9-mm pistol. In front of him, a half-dozen law enforcement officers crouched behind patrol cars with their weapons drawn. They had surrounded him on a muddy red road after an hourlong chase that reached speeds of 105 miles per hour. 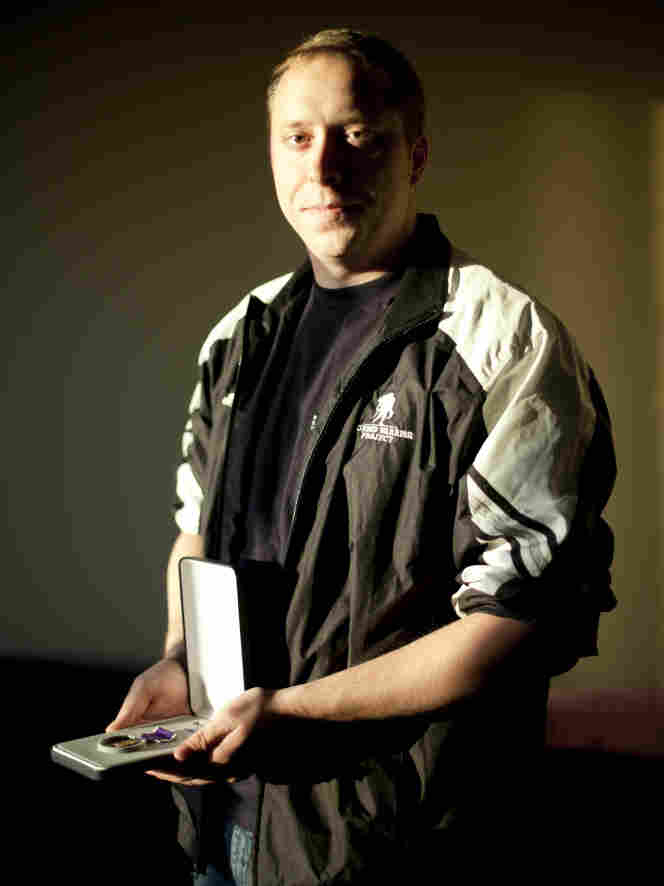 Brock Savelkoul, who was medically discharged from the Army after serving three tours in Iraq, received the Purple Heart because of a wound to his leg. But it's the traumatic brain injury and PTSD he sustained that are complicating his life. Katie Hayes Luke for NPR hide caption 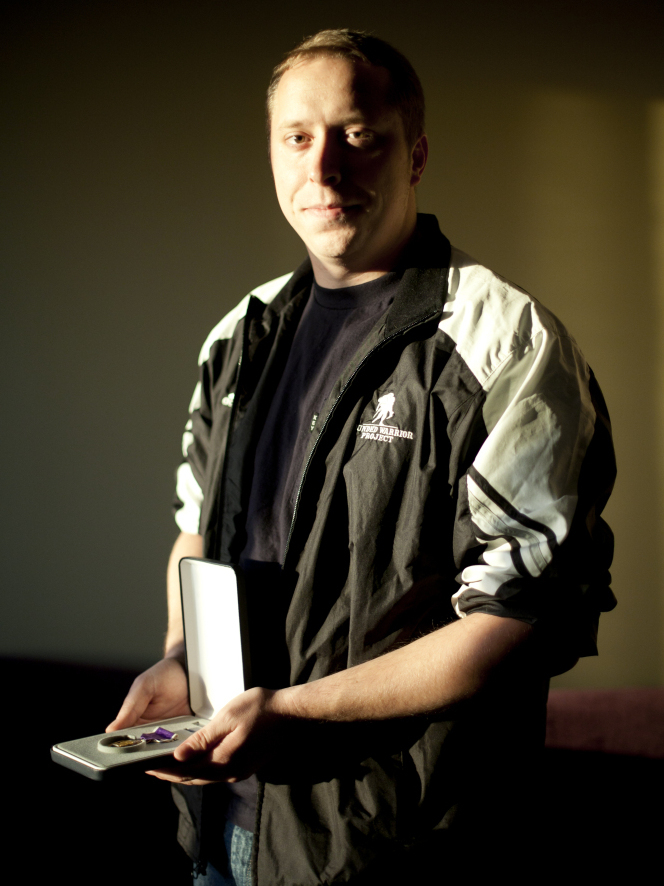 Brock Savelkoul, who was medically discharged from the Army after serving three tours in Iraq, received the Purple Heart because of a wound to his leg. But it's the traumatic brain injury and PTSD he sustained that are complicating his life.

Savelkoul stared at the ring of men and women before ducking into the cab of his truck. He cranked up the radio. A country song about whiskey and cigarettes wafted out across an endless sprawl of North Dakota farmland, stubbled from the recent harvest. Sleet was falling, chilling the air. Savelkoul, 29, walked slowly toward the officers. He gestured wildly with his gun. "Go ahead, shoot me! ... Please, shoot me," he yelled, his face illuminated in a chiaroscuro of blazing spotlights and the deepening darkness. "Do it. Pull it. Do I have to point my gun at you to ... do it?"

Twenty feet away, the officers shifted nervously. Some placed their fingers on the triggers of their shotguns and took aim at Savelkoul's chest. They were exhausted, on edge after the chase and long standoff. They knew only the sketchiest of details about the man in front of them, his blond hair short, his face twisted in grief and anger. Dispatchers had told them that Savelkoul had been diagnosed with post-traumatic stress disorder. 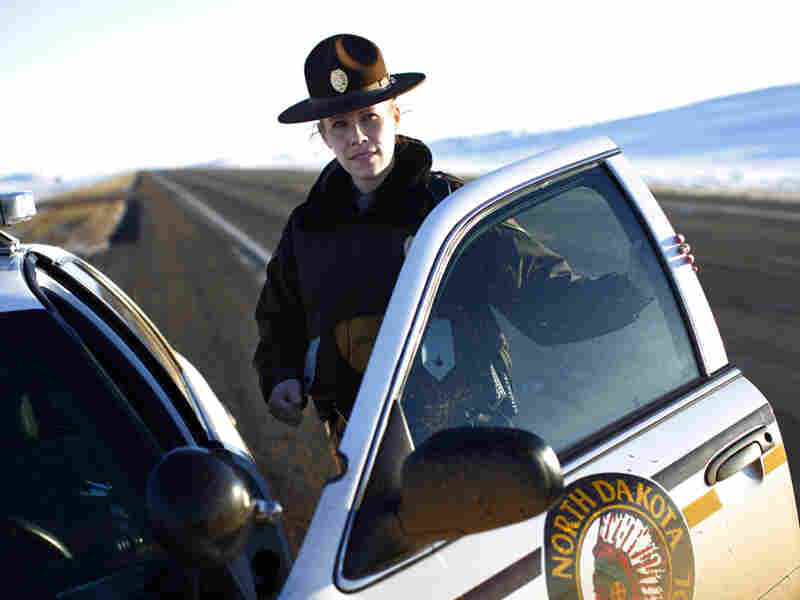 Megan Christopher, a North Dakota state trooper, was one of the first officers on the scene and was part of the chase that led to the arrest of Brock Savelkoul. John W. Poole/NPR hide caption

More From The Brain Wars Investigation

They warned that he might have been drinking. Family members told police that Savelkoul had fled his home with six weapons, including a semi-automatic assault rifle and several hundred rounds of hollow point ammunition. To Megan Christopher, a trooper with the North Dakota Highway Patrol, Savelkoul's intentions seemed obvious. "Suicide by cop," she thought. "He wants to go out in a blaze of glory."

As it happened, Savelkoul's state of mind was of interest not only to the cops, but to some of the nation's top military officers and medical researchers.

More than 2 million troops have deployed to Iraq and Afghanistan since 2001. Tens of thousands have returned with a bedeviling mix of psychological and cognitive problems. For decades, doctors have recognized that soldiers can suffer lasting wounds from the sheer terror of combat, a condition referred to today as post-traumatic stress disorder. They also have come to know that blows to the head from roadside bombs — the signature weapon in Iraq and Afghanistan — can result in mild traumatic injuries to the brain, or concussions, that can leave soldiers unable to remember, to follow orders, to think normally.

Now it is becoming clear that soldiers like Savelkoul are coming home afflicted with both conditions, in numbers never seen before. Studies have estimated that about 20 percent of soldiers returning from Iraq and Afghanistan have suffered a mild traumatic brain injury while deployed. Of those, anywhere between 5 percent to nearly 50 percent may suffer both PTSD and lingering problems from traumatic brain injuries. It is an epidemic so new that doctors aren't even sure what to call it, let alone how best to diagnose and treat it.

Given the number of troops deployed, tens of thousands of soldiers, Marines, sailors and airmen may be suffering from this pernicious combination of PTSD and lasting problems from mild traumatic brain injury. They become, quite literally, different men and women than they used to be, a generation of warriors whose fight has shifted from external combat zones to invisible internal battlefields.

The issue has ignited debate in scientific and military circles, where much of the basic science remains in dispute. Are the two conditions related? If so, how? Does having a mild traumatic brain injury increase the chance of developing post-traumatic stress disorder? Or does surviving a terrifying event somehow make it more difficult for the brain to recover from a concussion?

"It's very complicated," said Jennifer Vasterling, who has studied the issue and treated soldiers as chief of psychology at the Boston Veteran's Administration Hospital. "There are no simple scenarios."

Savelkoul and four of his comrades landed on the front lines of this confounding new conflict over the minds of America's soldiers when an Iraqi rocket exploded near their trailer in January 2009. By chance, a senior Army neuropsychologist was in Iraq at the time to conduct a study on the military's tools for diagnosing concussions.

After learning of the attack, he persuaded Savelkoul and the others to enroll. The men became the first fully documented victims of "pure blast" concussions — that is, mild traumatic brain injuries caused by the force of an explosion, rather than a secondary effect, such as slamming into a Humvee wall after a roadside bomb.

The concussions marked only the beginning of the men's problems. Aftershocks from the blast would ripple through each of their lives differently, mirroring the spectrum of psychic and physical outcomes that doctors have begun to catalog. Of the five men injured that night, three remain in the Army and are currently deployed to overseas war zones. One recovered quickly, though he continues to suffer occasional severe headaches. Two recuperated more gradually but complain of forgetfulness and problems concentrating. A fourth left the military, tired of the violence and still grappling with concussion symptoms.

Savelkoul struggled the most to return to the person he had been before. On that night last September, his troubles transformed from academic data point to terrifyingly real confrontation. All the Army's men, all its research, all its treatments, had failed to prevent the desperate showdown that would unfold on a deserted stretch of highway just south of the pinched hills of the Dakota badlands. Now the outcome depended on one distraught man and a half-dozen nerve-wracked police officers, trying to negotiate a battlefield of the mind that none of them — no one in the world, really — understood.

Continue reading Brock Savelkoul's story, along with what happened to the other men of the "Psycho Platoon" who also suffered from the same blast, on ProPublica.org, or download the full story to your Kindle.You can also view the related video on NPR's YouTube channel.