Accessibility links
Fox Hunts For More Than Just Game As 'Rio' Hooks Up With 'Angry Birds' The game Angry Birds is one of the most popular apps you can get for your smartphone. It's also teaming up with a new movie as 20th Century Fox tries out a partnership with game creator Rovio. 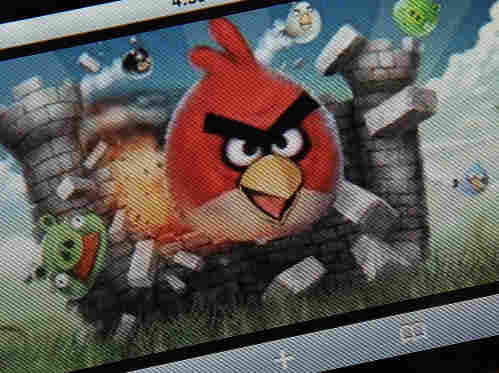 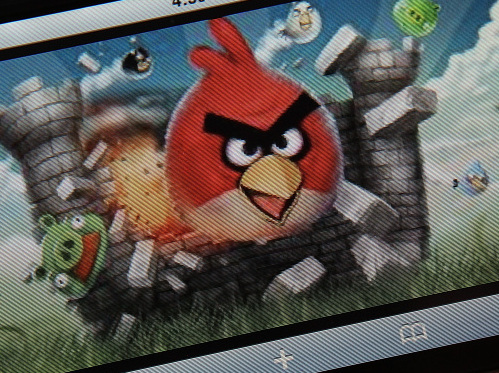 You simply cannot appreciate the brilliance of Angry Birds unless you play the game. So go get your iPhone or borrow one from a friend. You can download the first game for free.

The physics-based game is wildly addictive. You could waste a good deal of time catapulting those angry birds through the air, trying to get the arc just right so you smash the pigs' castle.

By the way, the birds are angry because the pigs have stolen their eggs, in case that's not immediately apparent.

Created by the Finnish company Rovio, Angry Birds is one of the most downloaded apps ever, with over 100 million downloads in just 15 months. Now the Hollywood mega studio 20th Century Fox is getting a piece of the action. Two Fox executives flew to Helsinki, wowed the Rovio team with clips from their new movie Rio and struck a deal. Rio is being made by the same people behind Ice Age.

What is it about Angry Birds that makes it so successful? Andrew Stalbow, Senior Vice President of Mobile for 20th Century Fox, says it's partly that the degree of difficulty is just right for both kids and adults. "It looks pretty simple but it's pretty hard to master," he says. Plus, Rovio markets the game almost exclusively on social media. "They've created these adorable videos that just spread virally across social networks," says Stalbow. "It's something that we really aspire to with the games we've created at Fox."

So the American behemoth 20th Century Fox wanted to sit next to this little company in Finland. To make it happen, Andrew Stalbow and another Fox executive flew to Helsinki. They showed Peter "Mighty Eagle" Vesterbacka and the team at Rovio clips of their new movie Rio, which is also about birds. "Our creative people really liked what they saw," says Vesterbacka.

So Rovio agreed to create a new game featuring the Angry Birds and the exotic birds from Rio. Check out this trailer to see how these birds come together.

Fox would be thrilled to get a piece of the Angry Birds fan base. And a lot of those gamers are not moviegoers. With this new avian alliance, Fox might have a chance to reach them. "There will be a lot of people who will go and see this that normally wouldn't go and see a movie, so it will be very interesting to see," says Rovio's Vesterbacka.

And what's in it for the angry birds? "Marketing power," says Andrew Stalbow of Fox. That includes billboards, posters, and a hidden code in a Super Bowl commercial.

It's hard to say who has more to gain from the Fox-Rovio partnership. The Angry Birds got a free ride in an expensive Super Bowl ad, and Rio might reach a whole new audience when its birds are part of the massively popular, highly addictive video game.