Accessibility links
Arab League Wavers On U.N.-Sanctioned Airstrikes The group initially pushed for the U.N. Security Council to enforce a no-fly zone in Libya when forces loyal to leader Moammar Gadhafi began attacking the opposition following protests. But on Sunday, the league began criticizing actions being taken, claiming that some efforts fell outside the limits of the U.N. resolution. 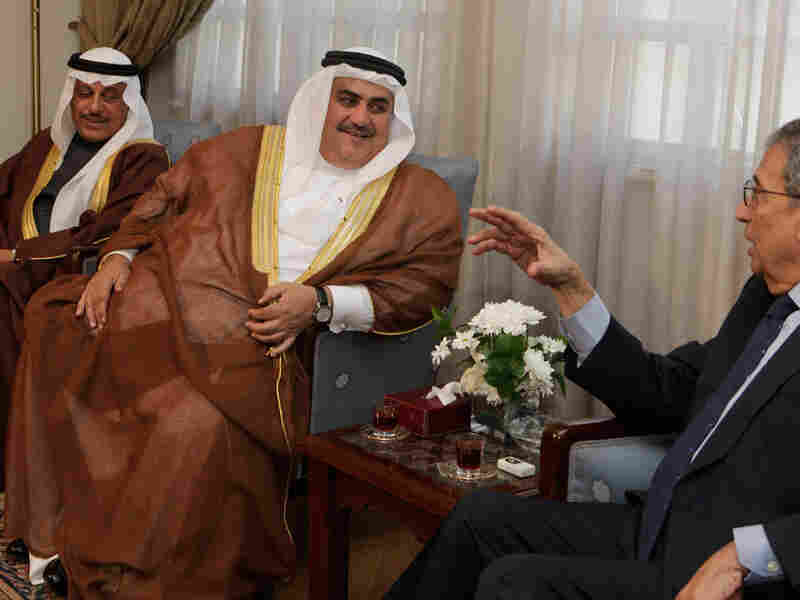 Support from the Arab League for international military efforts designed to establish a no-fly zone and protect civilians in Libya began to waver in recent days, amid unconfirmed reports that airstrikes against government targets had killed civilians.

The 22-member Arab League initially pushed for the U.N. Security Council to enforce a no-fly zone in Libya when forces loyal to Libyan leader Moammar Gadhafi began attacking the opposition following protests. But on Sunday, the league began criticizing the actions being taken, claiming that some efforts fell outside the limits of the U.N. resolution.

And though the league's leader, Egyptian diplomat Amr Moussa, has downplayed his criticism of the U.S.-led campaign, the public step backward underscored the precarious politics of Western intervention in the Arab world — even when characterized as a humanitarian effort. Qatar reportedly was the only Arab country contributing forces to the coalition, though the United Arab Emirates also allied with the operation. Talks were under way in the hopes of establishing more Arab involvement.

President Obama assured the international community on Monday that the U.S. intends to hand over its leading role in military operations "within a matter of days." How that handover would occur — and to whom, exactly — remains unclear.

Two Middle East experts, Samer Shehata and Michael Rubin, weighed in separately on the new sense of nervousness from the Arab League.

Shehata is an associate professor specializing in Arab politics at Georgetown University's Edmund A. Walsh School of Foreign Service. Rubin is a Middle East expert at the American Enterprise Institute and an author of a 2008 AEI report, "Dissent and Reform in the Arab World: Empowering Democrats."

The Arab League, or League of Arab States, was founded 66 years ago in Cairo, where it has its headquarters.

Originally comprising Egypt, Iraq, Lebanon, Saudi Arabia, Syria, Yemen, and what came to be known as Jordan, the league now has 22 voluntary members in the Middle East and North and Northeast Africa. It includes the State of Palestine, covering those living in the disputed Palestinian territories.

The organization serves to promote the economic, cultural and social interests of the estimated 340 million people living in member states. Decisions are binding only to states that favor them. More than 90 percent of those living in Arab League countries are of the Muslim faith.

Member countries launched a failed attack on Israel when it was created in 1948. That led the league to form a mutual defense treaty two years later. A common market was established in 1965.

The league had long maintained a boycott of Israel, and in the mid-1960s it attempted without success to move forward with a united Arab military strategy to liberate Palestine. It supported Iran in the Iran-Iraq War in the 1980s but was divided over the Iraqi invasion of Kuwait in 1990.

NPR: What didn't Arab League officials understand about the no-fly zone enforcement they endorsed March 12, given that U.S. officials — including Defense Secretary Robert Gates — publicly warned that taking such action would be an act of war?

Shehata: I think they must have understood what would take place and what is necessary to produce a "no fly" zone. But the image of a Western air force bombarding Libyan positions might not look good in the Arab world. As you know, there's a good deal of suspicion regarding the motivation of Western countries intervening in the Middle East. If one wants to be sympathetic to Mr. Moussa, he's trying to influence the extent to which military force is used, to put pressure on countries to lessen military involvement. And he's also trying to hedge his bets: He's a presidential candidate and doesn't want to be seen as someone who sanctioned a bombardment that could potentially kill many Libyan civilians or could become unpopular.

Rubin: There are different flavors of no-fly zones. The Arab League may have misunderstood this no-fly zone as similar to the one in Iraq in 1991, after Desert Storm. Then, there was no specific action to take out anti-aircraft positions, because the war had already done that. So they weren't flying bombing campaigns to inaugurate the no-fly zone. Now, if rumors are true, some of Gadhafi's compounds have been hit. Runways have been bombed to make them unusable. Instead of reaction, it looks like the Pentagon and NATO have opted for pro-action. This is a different flavor.

NPR: The Arab League seems concerned about a legitimate issue — civilian deaths that are or may be occurring with the imposition of the no-fly zone. Is there a good answer to that concern?

Shehata: The question is: What was the alternative? To allow Gadhafi to take Benghazi — to go, as he said he would, "house by house" killing protesters?

NPR: Why do you think Libya's neighbor, Egypt, has not gotten involved in developments next door?

Shehata: There are several reasons they haven't been formally involved. As a neighboring state, it would have meant a declaration of war on Libya. Hundreds of thousands of Egyptians live and work in Libya, and Gadhafi could have essentially taken them hostage. Also, the Egyptian military has its hands full at home, essentially running the country since [former Egyptian President] Mubarak's ouster.

Rubin: I would have thought that Egypt would have sent in ground forces to stabilize the situation, to help create a safe haven in eastern Libya. One of Egypt's biggest fears is having tens of thousands of armed refugees moving into Egypt. But part of the reason for Egyptian inaction might be the chaos in Egypt, and that the U.S. and Europe may not have asked for their help.

NPR: How do you interpret Russian Prime Minister Vladimir Putin's condemnation of the no-fly effort as "intervention in a sovereign state?"

NPR: How legitimate are charges that oil is again playing a role in Western involvement in the Arab world?

Shehata: It's a real issue, and one that Gadhafi himself has highlighted — asserting that he'll take a country's current position into consideration in future oil deals. Punish and reward. But I do not believe it is the main reason why Western powers are acting against Gadhafi's forces. He is a ruthless tyrant who is using massive military force against a largely civilian population.

Rubin: It's a tired charge, but one with resonance. Somalia, Bosnia, Haiti — there was no oil involved; the common denominator seems to be humanitarian. But this points to how weak American public diplomacy is.

NPR: Longer term, what might this discomfort with Western intervention mean, not only for Libya but for other Arab countries roiled by dissent?

Shehata: Why it is so historic that Arabs took that position on the no-fly zone: These are countries that are not democratic, and there are fears that something like this could happen to them. We're seeing continuing unrest and opposition movements in Yemen, Bahrain and Syria; this potentially sets a terrible precedent for those states. It makes their ability to use massive force against protest result in international intervention. The Arab League approving intervention puts them in a difficult situation. It could happen to them, as well.

Rubin: President Obama has got to be careful to understand that the diplomatic situation is never frozen in time. Today's blessing might be tomorrow's curse. It's extremely unlikely to have broad international economic sanctions on Libya, especially with Russia trying to be pro-Gadhafi. To avoid going to the U.N. for sanctions, there needs to be a provisional government in Libya to make investors uncertain enough not to help Gadhafi.

NPR: How do you see this playing out?

Shehata: It's not going to be clean. There's not going to be a resolution in days. But greater intervention now would lead to the best outcome. There also needs to be a path for Gadhafi and members of his family to de-escalate the conflict. Exile won't go over well, but it's a better outcome than a war that drags on for six months and results in thousands more dead.

Rubin: If this is not resolved in the next four days, I think we're looking at at least four months. Obama needs to take the lead; he's got to recognize a new Libyan government. Gadhafi can't stay — and if he ends up with a nice villa in Caracas, maybe avoiding prolongation of the crisis is worth it. If they decide to prosecute him for war crimes, he'll fight to the death.