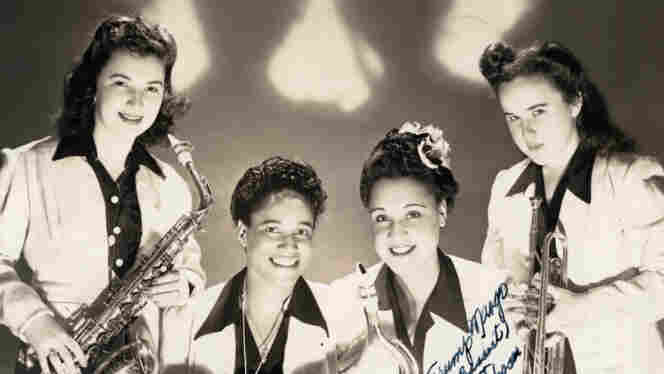 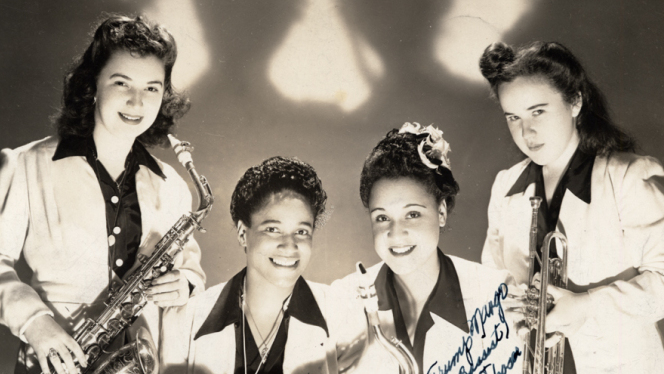 Four members of the International Sweethearts of Rhythm, circa 1944. Rosalind Cron, one of the group's first white members, stands at the far left.

In the 1940s, when war and the draft dealt a crippling blow to many of the best big bands, there was one the draft couldn't touch: the International Sweethearts of Rhythm. But few critics could bring themselves to take an all-female band seriously, so they were largely overlooked by the press. This week, the Smithsonian is paying honor to the group as part of its annual Jazz Appreciation Month. 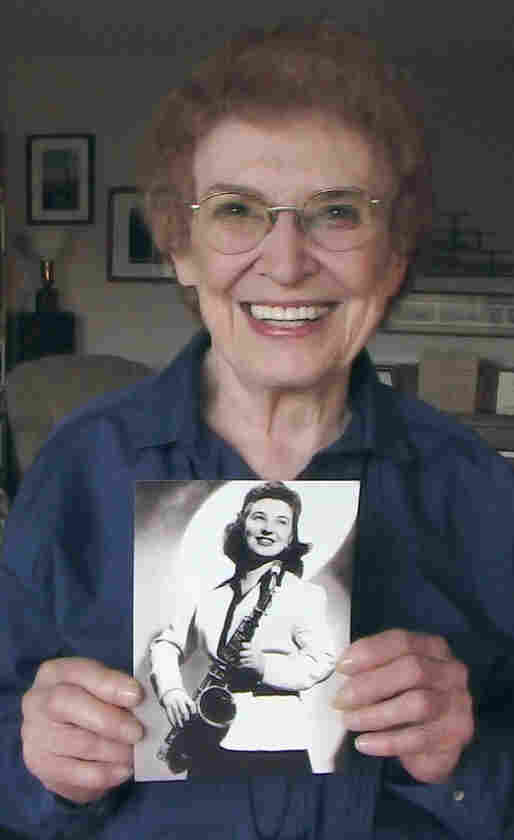 Rosalind Cron poses with a photo from her days with the Sweethearts. Shawn Corey Campbell for NPR hide caption

In the 1940s, the International Sweethearts of Rhythm fought a two-front war: gender on one side, Jim Crow on the other. When they were rediscovered by academics in the '70s and '80s, it was not in music programs but Women's Studies departments, where they were more important as political symbols than working musicians.

To the Sweethearts, however, it was always about the music. For nearly a decade, these 17 ladies crisscrossed America by sleeper bus, generating excitement and often breaking records set by the big name man-bands.

But sex cut two ways: Audiences saw women and expected a novelty, not a jazz band. Today the Sweethearts' footprint in music history is as petite as Snow White's slipper. Just a handful of recordings survive, most from Armed Forces radio broadcasts.

The Sweethearts began in the rural junction of Piney Woods, Miss., in 1937. Lawrence Jones had founded a vocational school there primarily for young black children and teens and wanted to raise money by forming a student swing band.

Jones' daughter, Helen Jones Woods, was a member of the band and remembers the beginning. "My father was very interested in music," recalls Woods, who says the idea for the Sweethearts was sparked by Phil Spitalny and His All-Girl Orchestra, a white ensemble working at the time. "My father heard the band over the radio one time and said, 'I've got a lot of girls here. Maybe I could start myself an all-girl band.' "

Nine Women In The Room: A Jazz Musicians' Roundtable

One of the original members was Willie Mae Wong, whose Chinese ancestry helped give the band an "international" look, along with two young women from Hawaii and Mexico. Seen through the peculiar lens of 1940s Mississippi law, Wong wasn't out of place in a largely black orchestra — her Chinese face was as nonwhite as a black one. For the moment, then, the Sweethearts were able to evade the social consequences of race mixing and the arm of Jim Crow.

In 1941, however, the Sweethearts turned pro. New talent was brought in, including two white players. One of them, saxophonist Rosalind Cron, says she was hardly noticed in cities like New York and Chicago — but in the Deep South her presence was criminal.

"We got to Baltimore and I asked Millie Jones, who was part American Indian, part black, if she'd like to go downtown on a bus with me to window shop," recalls Cron. The two stopped into Woolworth's for a soda, and found they couldn't get service. " I said to Millie, 'I'm just going to stop this waitress and find out why she's ignoring us,' " says Cron. "She got very excited and jumped up and ran up those stairs. She was really frightened."

Later. the road manager explained the facts of life in the South. "They called me in and explained that Jim Crow was a series of rules and laws, and explained what life was going to be like from now on," says Cron. The crew offered her the option of going home, but she resolved to stay the course. "After that Baltimore episode, I made up my mind then and there," she says. "I wasn't going to back down."

White women enjoyed a privileged place in Southern values — to choose to work with blacks was to reject that privilege and the values it represented. In the code of Jim Crow, Cron was a traitor to her race. She survived the sheriff by keeping a low profile, and occasionally using makeup to pass as black. "I would either know, understand and learn how to live as a black girl, or I could go home," says Cron. "Everybody knew this was dangerous territory."

There was no need for makeup in the summer of 1945. The Sweethearts played to cheering audiences, white and black, in Paris and occupied Germany — the high mark of their history. The original band broke up in 1949. Years later, another great bandleader, Earl Hines, called the International Sweethearts of Rhythm "the first freedom riders."

The Sweethearts perform in their 1940s heyday.