Accessibility links
Catholic Order Provides For Street Kids In Guayaquil, Ecuador, rapid urbanization has led to a growing number of street kids — a dilemma that the Salesians have taken on as their own. The Catholic order gets the kids and teenagers off the streets, teaches them useful skills and, in some cases, reconnects them with their families. 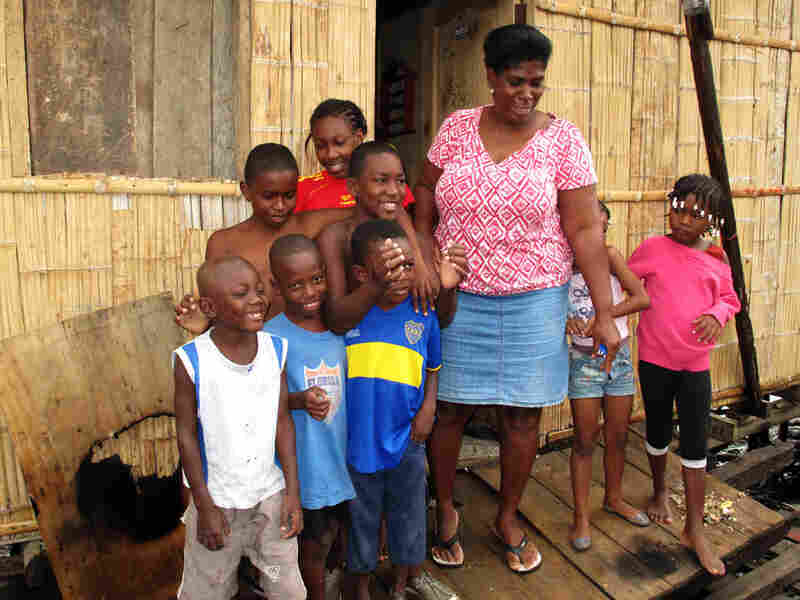 Fifty-year-old Segunda Ayobi, with her extended family. Ayobi, who lives in a slum in Guayaquil, Ecuador, enrolled her son Mario in a shelter when he began to miss school, to keep him away from drugs and trouble. Larry Abramson/NPR hide caption 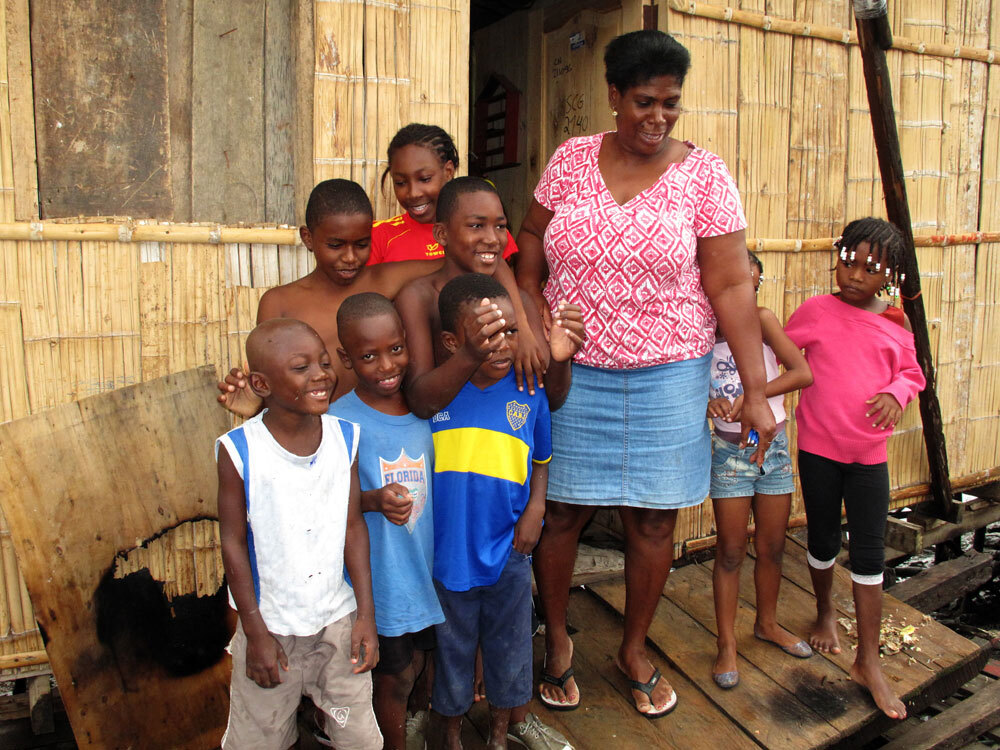 Fifty-year-old Segunda Ayobi, with her extended family. Ayobi, who lives in a slum in Guayaquil, Ecuador, enrolled her son Mario in a shelter when he began to miss school, to keep him away from drugs and trouble.

In many developing countries, urbanization is leading to a huge problem — a rapid growth in the number of street children. They often flee their homes to escape abuse or just to earn extra money. Social services agencies have had limited success dealing with the problem because there are so many causes, from domestic violence to poverty.

Guayaquil, Ecuador's largest city, is a major port. The city's many waterways are lined with rickety shacks and houses thrown up quickly to house new arrivals.

From the front step of Segunda Ayobi's cinder block house, you can't escape the strong smell of trash and other waste that collects in a nearby estuary. Nearby, tough-looking young men glare at any strangers who cross their turf. Ayobi says this is not an easy place to raise a child.

"We have a lot of kids in the neighborhood who get involved in drugs — 13- to 14-year-olds," Ayobi says. "And I was very concerned about that."

A couple of years ago, Ayobi was worried about her son Mario, who was just 13 then. With her limited income from selling home-cooked food, there wasn't much money around the house.

Children get so used to the street life, if they have spent more than a year out on their own, I can almost tell you for sure you will not get them back to family life.

Gradually, Mario gravitated toward the streets, trying to earn his own money. He stopped going to school. This is a familiar pattern here. Kids eventually abandon their families entirely, and some end up in prostitution. So Ayobi took a difficult step — she asked a shelter for street kids to take him in.

"It was a very painful decision. It was very painful for me and for him. It was the first time that we separated," she says. "But I think that was the best decision for him."

Ayobi turned to a Catholic order that has taken a special interest in the plight of street children: the Salesians.

'The Best Interest Of The Children'

Padre Francisco Sanchez maneuvers his truck through Guayaquil's thick traffic, on his way to a shelter and school his order has built. Known here as Padre Paco, this Salesian priest is following his calling.

He is doing what he can for these children who have been supporting themselves from a very tender age. The families they come from are often dysfunctional, Sanchez says. Often the best strategy for these kids is to not send them home again.

"We don't do reunification work," he says. "We strive for the best interests of the children."

On a beautiful, green campus, walkways are lined with tropical flowers, and mosquitoes swarm in the morning heat. Sanchez says the vast majority of the 80 or so boys here are black and from the poorest families of the city's poorest slums.

One group of boys is learning woodworking and welding in a huge machine shop fitted with old lathes and drill presses. Many stopped going to school for years as they wandered the streets.

The Salesians try to get them caught up in school, and teach them a useful skill. The hope is that they will be able to support themselves not by selling sodas on the streets but through a real job. 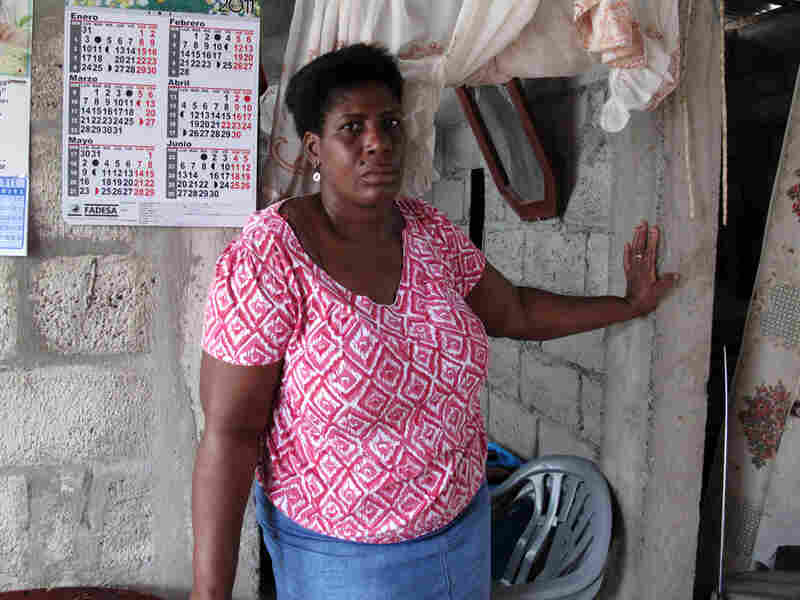 Ayobi lives in a cinder block house on the outskirts of Guayaquil. She says it's not an easy place to raise a child. Larry Abramson/NPR hide caption 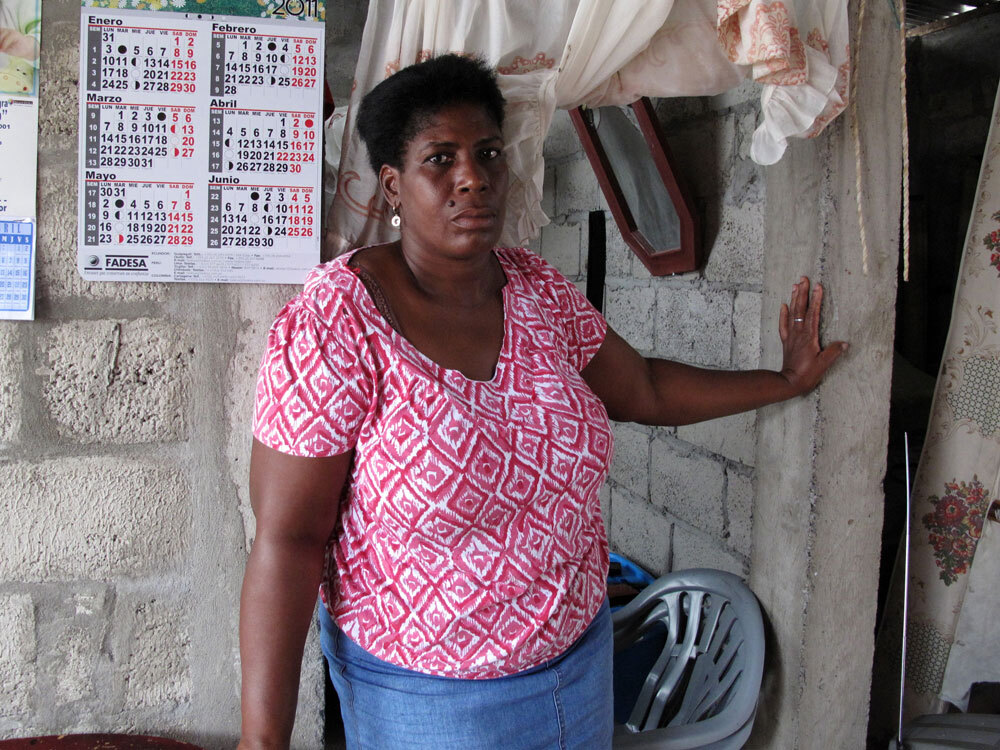 Ayobi lives in a cinder block house on the outskirts of Guayaquil. She says it's not an easy place to raise a child.

Ayobi's son Mario is 15 now and has been living in the shelter for a year and a half. Mario is years behind in his schoolwork and seems detached. He is unable to talk about his family's situation. He dreams of attending a soccer training school. Like many of the boys here, Mario seems convinced he will become a professional soccer player.

Many of these children came from homes where abuse was common. They have taken on the burdens of adulthood at a very young age.

"Children get so used to the street life, if they have spent more than a year out on their own, I can almost tell you for sure you will not get them back to family life," says Omar Jagoal, the clinical psychologist at the campus.

At the same time, these are not the orphans of Slumdog Millionaire, without any family support. They do have family ties, and the Salesians try to take advantage of that. But Sanchez says he can't force families back together.

"We do ask the family to make a commitment," he says. "But in reality, we can't enforce it."

For the Salesians, this is the best way to help as many kids as possible. But many believe these families can and must be made whole, if these kids are going to become functioning, happy adults. It is tough work.

Learn about JUCONI an effort to mend broken families, on the next edition of All Things Considered.