Accessibility links
Ecuadoran Family Finds Refuge With Salesians Maribel Olmedo's little family is struggling. Her husband is recovering from an undiagnosed illness, and one of her sons was hit by a car and suffered brain damage. But the Salesians of Don Bosco helped the family build a house on their land and provides shelter for two of her sons where they also attend school. 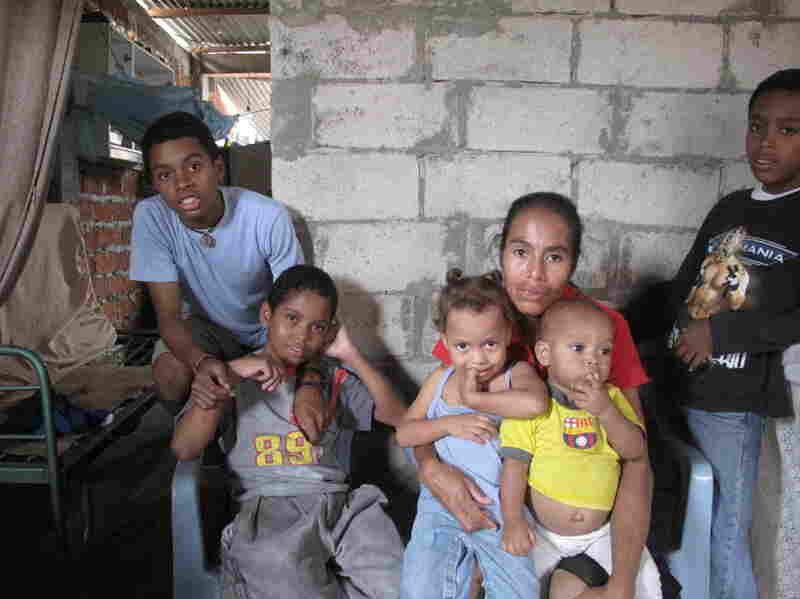 Maribel Olmedo sits in her house, surrounded by some of her children, including Hamilton (from left), 16, Jonathan, 12, Pierina, 2, and Jose, 1. The family struggles to make ends meet, but Olmedo says she is grateful her children are alive. Larry Abramson/NPR hide caption 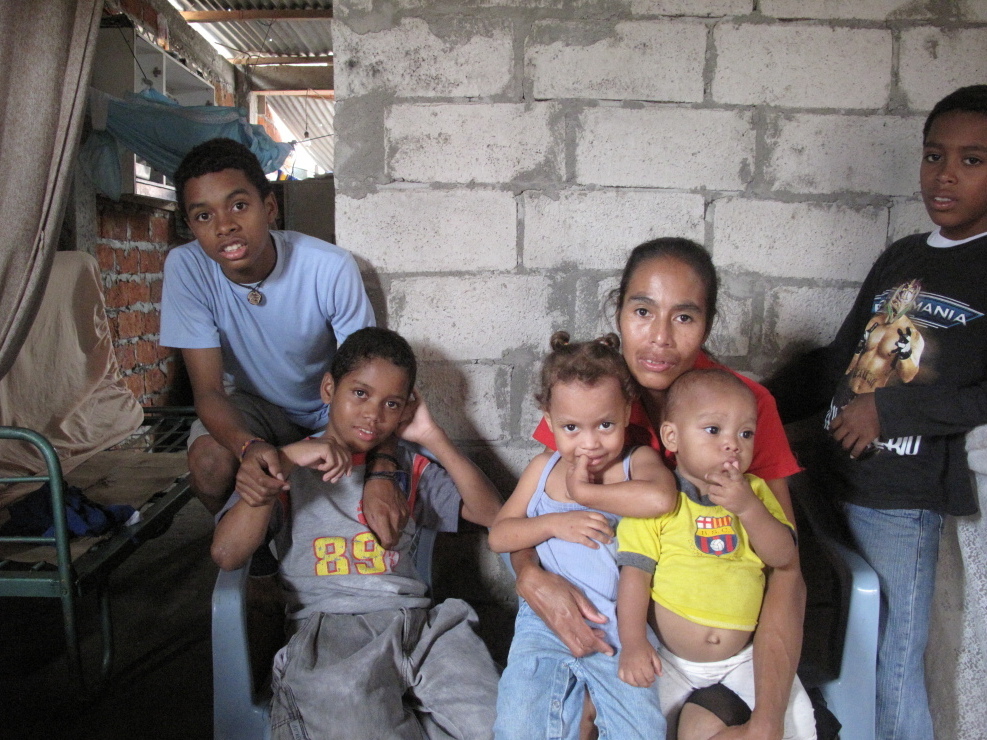 Maribel Olmedo sits in her house, surrounded by some of her children, including Hamilton (from left), 16, Jonathan, 12, Pierina, 2, and Jose, 1. The family struggles to make ends meet, but Olmedo says she is grateful her children are alive.

Maribel Olmedo doesn't complain about life, even though life has not been kind. She doesn't ask for much, either.

"My only dream is to set up a food business at home," Olmedo says.

She already has a big, empty freezer, but she doesn't have startup money. The mother of seven children between the ages of 1 and 15 is home-bound since her son Jonathan, 13, was hit by a car about two years ago.

The boy endured a brain injury on his way home from school on a Friday evening. He can't speak or walk, but he seems to understand his surroundings — and he smiles easily.

"Doctors didn't think he'd live," she says. "Jonathan was in a deep coma for 16 days, and he was tube-fed."

But in spite of the difficulties and the steep road ahead, she's optimistic.

The family was vulnerable and marginalized even before the terrible accident, but now the future is much more uncertain. Before the accident, Olmedo was a street merchant.

She'd take her children along the streets of Guayaquil — the largest city in Ecuador — to sell water bottles, toilet paper and toothpaste.

She has no nice words for the cops: "They call themselves police, but they are thieves."

They call themselves police, but they are thieves.

Olmedo is 37 but she looks much older — signs of poverty etched on her terribly frail frame. Her vivacious black eyes shine when she speaks about her children. Jose, her youngest, sits on her lap, and the others hover around her.

Life in the slums of Ecuador is hard — children and women can easily fall victim to prostitution, drugs and abuse. This is a reason why Olmedo has always kept her kids behind closed doors, to make sure they were not hanging out with bad company in the streets.

Most of the houses in Duran, a relatively new settlement in the outskirts of Guayaquil where the family lives, are one-bedroom cane shacks built up on stilts to prevent flooding.

Olmedo is one of the lucky residents. Her house is a concrete cinder block home. She and her husband bought the land from the city about 12 years ago and lived in a cane shack until last year, when the Salesians of Don Bosco, a Roman Catholic order, helped the family build the house.

The rainy season does a number in Duran — the roads are not paved, so they become rivers of mud. Olmedo laughs while giving visitors a tour of her house: "Water leaks through the roof when it rains," she says.

Like many other slums, this has few services. It does have electricity but no running water.

Olmedo's husband is gone temporarily, and so is his income. Since December last year, he's recovering from an undiagnosed illness. Olmedo couldn't take care of him, and he moved back to his mother's home in Esmeraldas, which is home to the majority of the Afro-Ecuadorian population.

Olmedo hasn't had a steady income since Jonathan's accident, and three meals a day are a rarity. She and her kids live off of church handouts.

Hamilton, 16, and Cristian, 14, live in a Salesian shelter for boys during the week where they attend school. They come home for weekends. Carolina, 9, Samuel, 5, and Pierina, 2, are not in school, but Olmedo says she'll get them in school as soon as she can.

She has been waiting for insurance money from the accident. She says she is hopeful about the future, and she laughs when asked how she can be so positive.

She thinks for a moment and says, "My children are alive."