Accessibility links
Creating Calm In Chicago's Schools An $18 million effort launched by Chicago Public Schools seeks to counter the culture of violence in homes and neighborhoods with what it's calling a "Culture of Calm." The program has changed everything from conflict resolution to the way students enter the building. 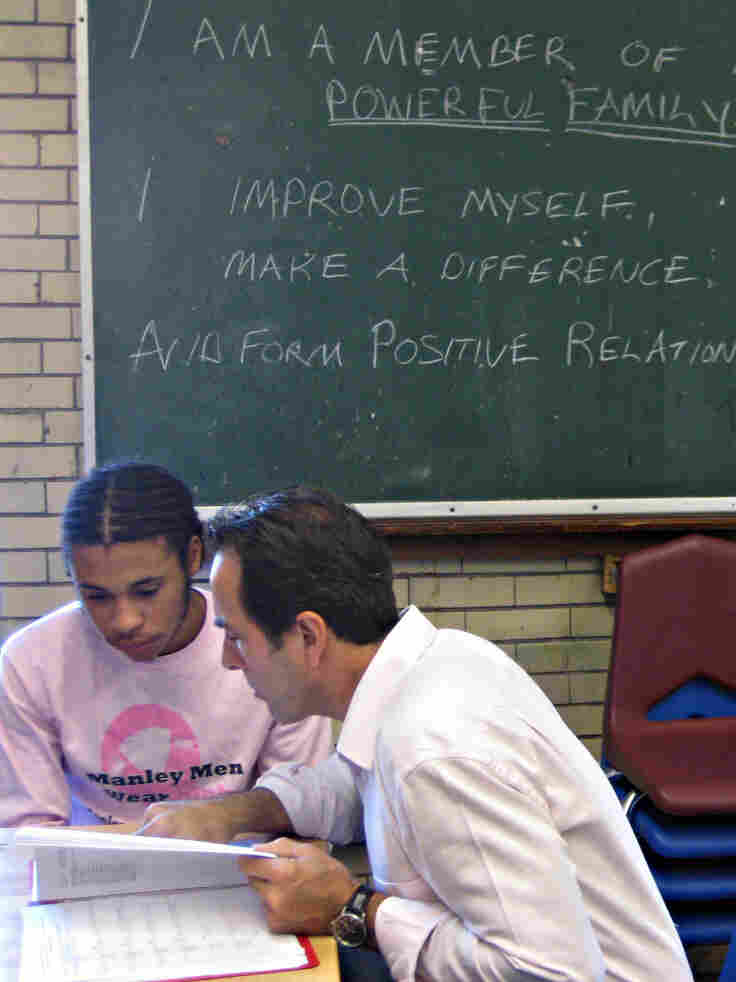 Construction teacher Michael Dimitroff talks with a student about his progress toward graduation during an advisory period. The school wants every student to form a strong bond with at least one teacher this year, part of its recipe for a calmer culture. Linda Lutton for NPR hide caption 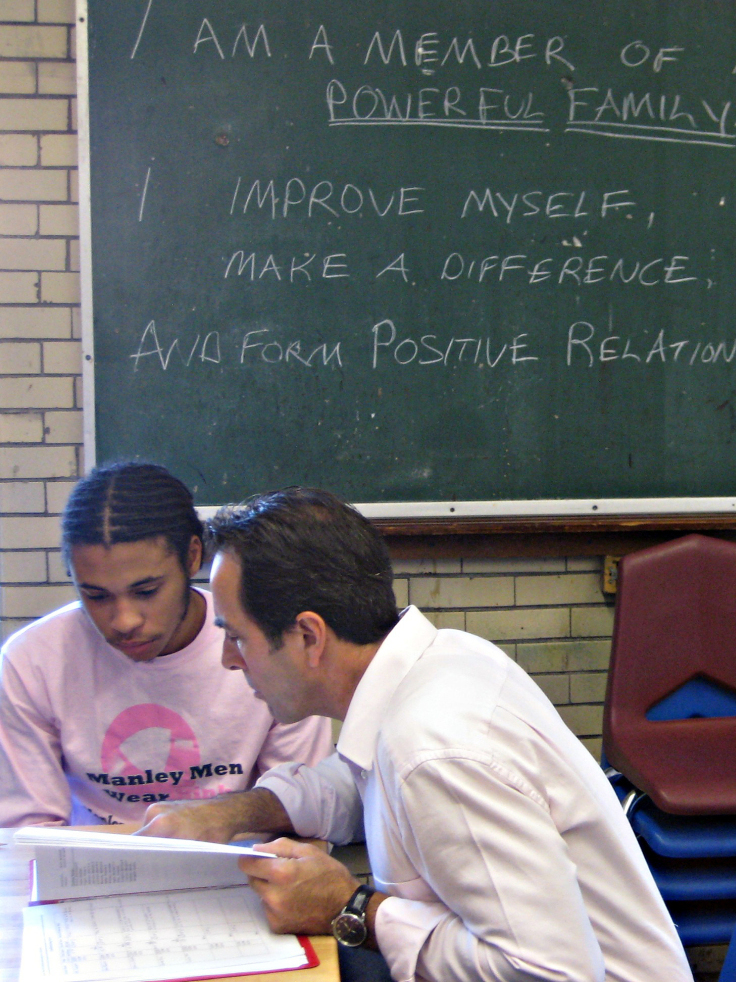 Construction teacher Michael Dimitroff talks with a student about his progress toward graduation during an advisory period. The school wants every student to form a strong bond with at least one teacher this year, part of its recipe for a calmer culture.

Changing the culture of place is not an easy assignment. At Manley Career Academy High School on Chicago's poverty-racked West Side, a lot of hard work is happening in Room 113, known as the Peace Room.

Student Sharell Jones is here because she wants to explode.

"I'm trying to stay out of trouble because it is my senior year, and I have improved more on my attitude, and I have not been in no fights," Jones says. "Arguments, yeah, but no fights."

But on this day, Sharell is tested. A boy threw juice on her friend, then hurled an insult. The friend is eight months pregnant. The spat turned physical. Now, Peace Room staffer Ilana Zafran is trying to keep the fight from going any further.

"You can control what happens in this situation in terms of the fights, right? What are other things you could do besides get back at this guy and his friends?" Zafran asks Jones.

A third of Manley students have visited the Peace Room to resolve conflicts with other students or teachers this year. Eighty percent have come before any physical fight occurred.

"If a student is starting to get angry, teachers, security staff know [that] this is a space where students can come. We'll de-escalate, talk to them about stuff, and we have the resources to be able to do that around students this year," Zafran says.

Manley is one of six "focus" schools getting around $1 million for its culture transformation. It's part of an $18 million effort launched by Chicago Public Schools to counter the culture of violence in homes and neighborhoods with what it's calling a "Culture of Calm." The district hopes the program, which will eventually be in 38 of the city's most troubled schools, will produce more learning and students who feel safer.

The initiative is putting every aspect of the school under a microscope, from the way kids enter the building — through just one door this year — to the way Manley re-integrates students who have been out of school because they were shot.

Yes, that's something this school has to deal with.

"When you walk into a school, and you can generally tell within the first 5 or 10 minutes is 'Does this school have a good culture?' And by a good culture I mean a culture in which learning can take place," says Josh Gray, who coordinates the district's anti-violence initiatives.

Many Chicago high schools struggle on a daily basis with fights. Some of them become melees outside, after school, like the one in which 16-year-old Derrion Albert was beaten to death in 2009.

Different schools are taking different paths to their calmer cultures. Some have tightened requirements on uniforms or banned cellphones. One school is isolating its troublemakers in single-sex classrooms, where they stay most of the day.

Many of Manley's Culture of Calm efforts are being led by the Umoja Student Development Corp., a nonprofit housed inside Manley.

Dialing down conflict is a theme. Bekah Epstein, who teaches English and drama, has been to a lot of workshops this year showing teachers how to avoid confrontation with students.

"I had this happen to me this morning: I had a girl who was wearing a hat, came into class. And it's as simple as saying, 'Hey, Good morning! Great to see you,' and pointing to my head so she knows to take her hat off," Epstein says. "And rather than making it, 'You know you're not supposed to have your hat on. Take that hat off right now, young lady!' You know, removing the negative without it ever becoming a conversation or an issue at all."

"Schools that are serving the same types of students with the same backgrounds can have very different climates. What ends up being the most important by far is the quality of relationships that students have with teachers and teachers have with parents," Allensworth says.

Manley wants every kid to connect with at least one adult in the school this year. Advisory periods once a week are meant to foster that and give students a chance to "check in."

"The way I'm able to tell if my school is calm is just [to] stand in the hallway. And I just listen," says Manley's principal, James Walton. "When I can see my security kind of just looking up and down the hall walking, without really having to go to a situation, those kinds of things indicate that it's a calmer environment."

Walton says Culture of Calm money has finally allowed him to give students basic services they need this year — like a full-time social worker and psychologist. Walton recalls that last year, a student found out at Manley that her sibling had just been killed.

"There was no one to take her to. We had nothing. That happened more than one time," Walton says.

This year, Children's Memorial Hospital is running trauma and anger management groups at the school. A mentoring initiative is giving intensive attention to kids who are more likely to get wrapped up in violence.

There have been painful reminders this year, though, of what Manley is up against. Walton saw one of his students buried this fall. He was shot a few miles from school. Walton says he isn't sure whether a calm culture inside Manley can reduce youth violence where it plays out, on the streets.

"I don't know what I can do about outside. But what I know I can do is give you the tools and mechanisms in my building that maybe you can take outside and begin to utilize," he says.

Manley is on track to cut student misconduct almost in half this year, though some take these numbers with a grain of salt. Culture of Calm hadn't even gotten started last May when the district announced a 77 percent plunge in disciplinary problems at the six focus schools. Chicago school officials say the University of Chicago's Crime Lab will ultimately measure whether its efforts are working.

Until then, they hope calmer cultures in high schools will stick — even after money for the initiative runs out this summer.

Editor's Note: Since we reported this story, two Manley ninth-graders were shot and wounded while sitting in a parked car. Neither of the boys attended school regularly, officials say. But Culture of Calm social workers visited their classes to quell rumors that they'd been killed and to help students process the shootings.