Accessibility links
In Fukushima City Shelter, Evacuees Imagine Future In this Japanese city about 40 miles from the Fukushima Dai-ichi plant, the nuclear crisis is hampering the earthquake recovery and dominating life. Owing to radiation warnings in their towns, some 1,300 people now live in the gymnasiums, workout rooms and hallways of the Azuma Sports Complex. 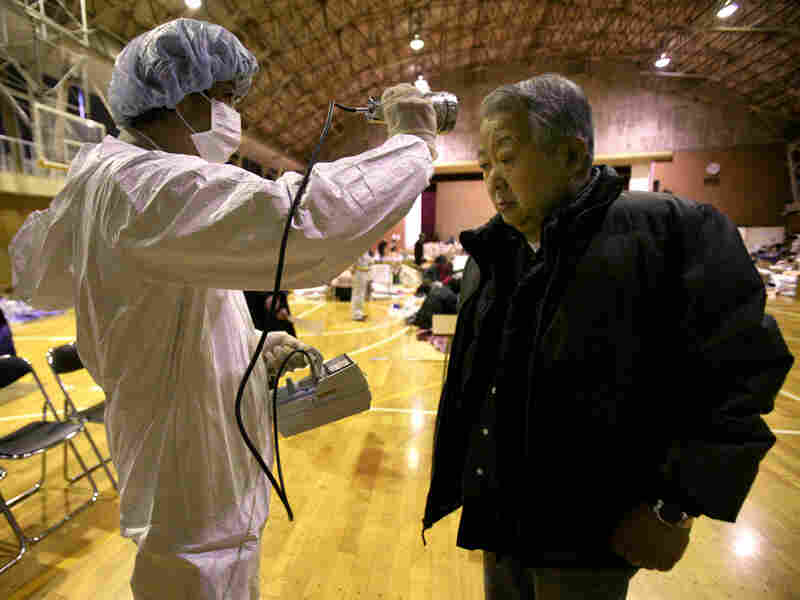 A man is screened for radiation exposure March 16 at a shelter in Fukushima city after being evacuated from an area near the nuclear facilities damaged by Japan's earthquake and tsunami. Wally Santana/AP hide caption

The ongoing crisis at Japanese nuclear reactors following the earthquake and tsunami is affecting a significant part of northeastern Japan.

In Fukushima city, about 40 miles from the Fukushima Dai-ichi plant, the nuclear crisis is hampering the earthquake recovery and dominating life.

Some 1,300 people now live in the gymnasiums, workout rooms and hallways of the Azuma Sports Complex. Most of the people sleeping on the floors are evacuees who were ordered out of the 12-mile exclusion zone around the crippled nuclear power plant.

'It Could Be Years'

Noriko Imura, 50, is staying at the shelter with two of her children. She's from the town of Namie, which is about 5 miles from the reactor.

Imura says there's no way she can feel safe in Namie right now. It's too close to the plant. She says she's happy to be at the sports complex.

As snow blows outside, it's still chilly in the facility, but volunteers pass out blankets and sweaters. Food is distributed three times a day. The water is drinkable.

Imura has no idea when or if she'll be able to return home.

"We've heard that it could be years, maybe even tens of years before we are allowed back," Imura says. "It's possible that Namie will cease to exist."

This is the local war room for monitoring the nuclear disaster. Technicians update charts with the latest radiation readings. Phones ring and bureaucrats race in and out.

Kiko Katsuhiro, a spokesman for the emergency management team, flips through a binder with charts of radiation levels in different parts of the prefecture. He says the radiation levels are highest closest to the reactor, and this has led to the ban on milk and leafy vegetables produced in the entire area.

"The standard that the entire nation of Japan has decided on is that once a certain level of radiation is detected in these vegetables, these products, we cannot sell them anymore," he says. "This has happened here. Therefore we have taken the appropriate measures."

Government officials in Tokyo say local farmers will be compensated for the products they are not allowed to sell.

This area was also affected by the earthquake and tsunami. The bullet train and the regular trains that come through here are shut down. The local ports are all closed, and the roads are open only to emergency vehicles.

A manager at a local paper products factory says he can't get technicians to come in and restart his machines. Gasoline is in short supply. And most businesses in Fukushima city remain shut.

The mayor, Seto Takanori, says there wasn't very much earthquake damage; the city is 30 miles from the coast. Takanori says they are dealing mostly with the effects of the radiation and whether the radiation will increase. He says no one wants to come to the city because they're afraid. 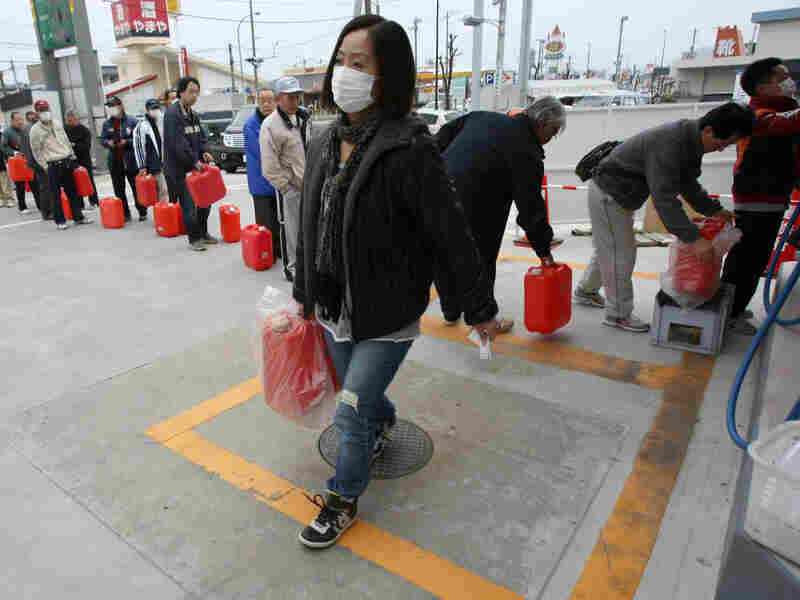 A woman carries fuel as lines of people wait with hopes of filling containers in Fukushima city on March 20. Wally Santana/AP hide caption

Farmers don't know whether they'll be able to sell their products. And if conditions at the plant deteriorate, the exclusion zone around the nuclear plant might be expanded to include Fukushima city.

The mayor says people there are worried — even though the government says they shouldn't be — about the air they're breathing and the water they're drinking. But he says even if the winds shift and the radiation increases, he's not leaving.

"We live our lives here," he says. "We are all together here. When you think about that, it's impossible for us to leave here."

Takanori says the situation facing Fukushima city is not Hiroshima or Nagasaki after the nuclear bombs went off. It's not Chernobyl. But his city also isn't what it was just two weeks ago.